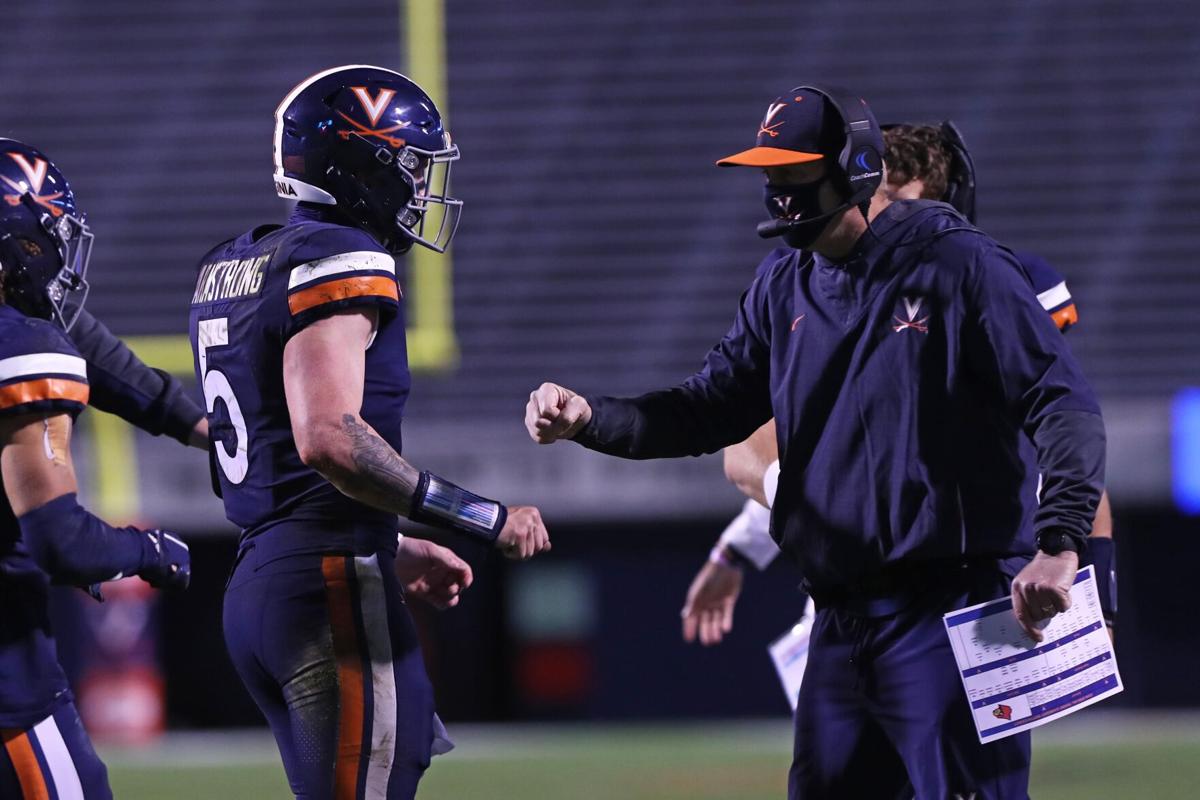 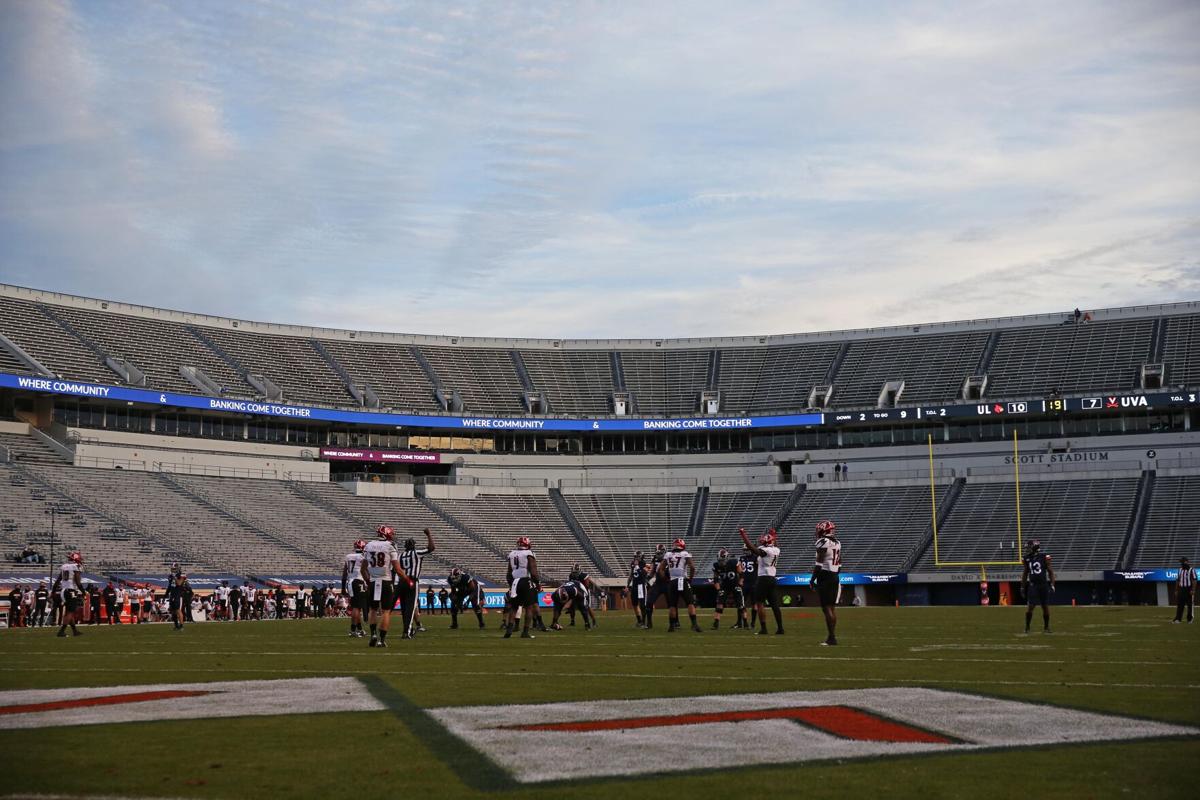 The Virginia football team takes on Louisville on Saturday at Scott Stadium.

When the Virginia football team takes the field Saturday against Abilene Christian, it will be in front of just 250 fans.

Recent guidance from the Governor’s office reduced the previously reduced capacity even more. Collegiate sporting events in Virginia can host a maximum of 250 spectators. Earlier this fall 1,000 fans were allowed at games.

The new restrictions come as COVID-19 case counts rise in Virginia and across the country.

The pandemic and subsequent positive tests within athletic departments led to ACC football games scheduled for Nov. 7, 14, 21 and 28 being postponed. Virginia’s Nov. 7 game with Louisville was pushed to Nov. 14 due to COVID-19 issues within Louisville’s program, while Pittsburgh and Georgia Tech postponed their Nov. 14 meeting. Miami will miss games on Nov. 21 and 28 due to positive COVID-19 tests within its program. Wake Forest and Duke won’t play this weekend either because the Demon Deacons are struggling with positive tests.

As the pandemic worsens, college sports aren’t immune to the impact affecting people across the country. UVa’s athletic department remains mostly healthy, though, posting impressive testing results while other programs fail to do the same.

“To this point, if a game isn’t to be played it’s not because of us,” head coach Bronco Mendenhall said Monday. “Our numbers are very low. Our protocols are really strong, and our team is safe. And they have been up to now, from the very, very beginning, and that had to be in place morally for me to even make sense of attempting what we’re doing.”

Mendenhall wakes up each morning with the No. 1 priority being to keep his team safe. Then, he shifts focus toward his team’s on-field performance.

“That has been and started as the primary focus and the very intent and what I promised the parents we would do,” Mendenhall said. “I would do everything I could do.”

The results are promising.

While the Cavaliers reported some positive tests over the course of the fall season, the volume of positive tests and players who missed time with contact tracing stayed low.

As teams across the country struggle to keep the virus from spreading throughout their program, the Cavaliers remain focused on diligently following the health protocols necessary to avoid the virus.

“I don’t see it being a lot harder,” senior defensive lineman Mandy Alonso said of this season’s additional protocols. “You have to add more time into the preparation of getting all these tests done and just being conscious about masking and social distancing, but really I don’t think it’s as big of a deal as a lot of people make it out to be.”

Alonso feels the team adjusted quickly to the new protocols, and the changes feel normal. UVa football players returned to Charlottesville on July 5, so they’ve followed COVID-19 health protocols in a team setting for several months.

Mendenhall loves his team’s commitment to the protocols, and he’s pleasantly surprised the ACC enters late November with a chance to finish the conference season, even with a few schedule changes and more potentially on the way.

“I’m encouraged of what the commitment level of young people shows,” Mendenhall said. “I had a long talk with [Louisville head coach] Scott Satterfield before the game and we’ve never seen anything like it and it’s just refreshing to be able to talk to someone else in the same seat. [Miami head coach] Manny Diaz has been a little bit more outspoken in terms of how it’s game day every day, but the uncertainty swirls around each and every week. But really the commitment to the protocols is real. It’s exhausting and it takes more discipline.”

The discipline leaves the Cavaliers in position to finish their fall season. Four games remain on the schedule with two of the games at home and road trips to Florida State and Virginia Tech left on the schedule.

That means three of UVa’s final four games occur in Virginia and require little or no travel. There’s a light at the end of the tunnel for the Wahoos.

At the same time, a reduced capacity in Scott Stadium this weekend serves as a reminder that UVa’s promising test results could change at any moment. As case counts rise across Virginia and more people become infected with the virus, the risk of potential exposure grows. The pandemic is still a very real and credible threat.

Reaching the end of the season — regardless of on-field results — represents perhaps the largest challenge facing college football teams the next month.

“We just kind of seem to be chugging along without much drama,” Mendenhall said. “But that doesn’t mean that I’m underestimating or saying that this week it couldn’t be different for us. It’s hard every day to keep our team safe, to keep our team healthy and to move forward. So every week is a challenge, every day, quite frankly, we’re at risk.”

Leading a UVa attack that moved the ball unselfishly all afternoon, Matt Moore finished with six assists, his most ever in an ACC game, as No. 4 Virginia avenged its earlier defeat, downing No. 3 North Carolina 18-16 in Chapel Hill.

The Virginia football team takes on Louisville on Saturday at Scott Stadium.