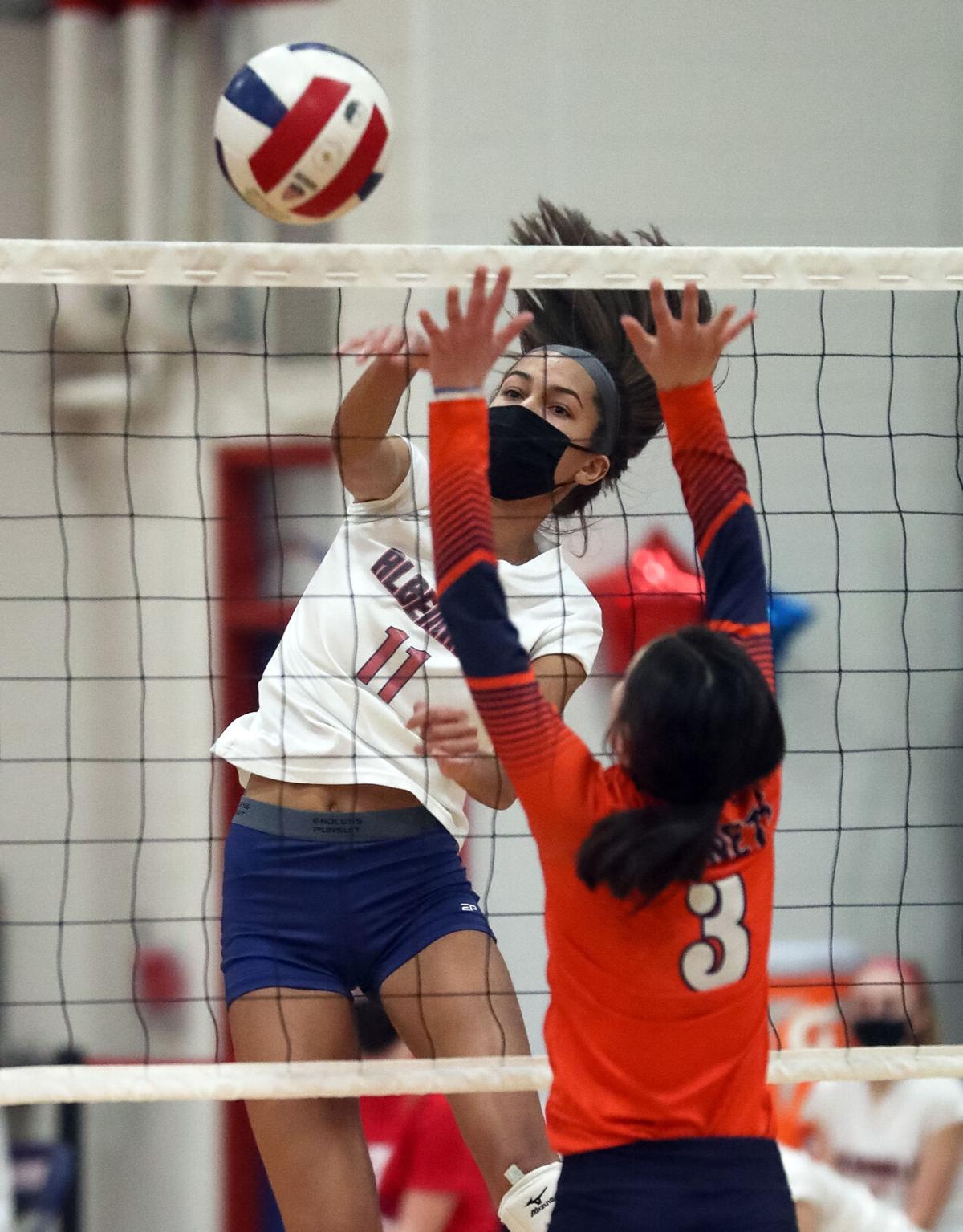 Albemarle’s Maya Winterhoff spikes the ball during a match. 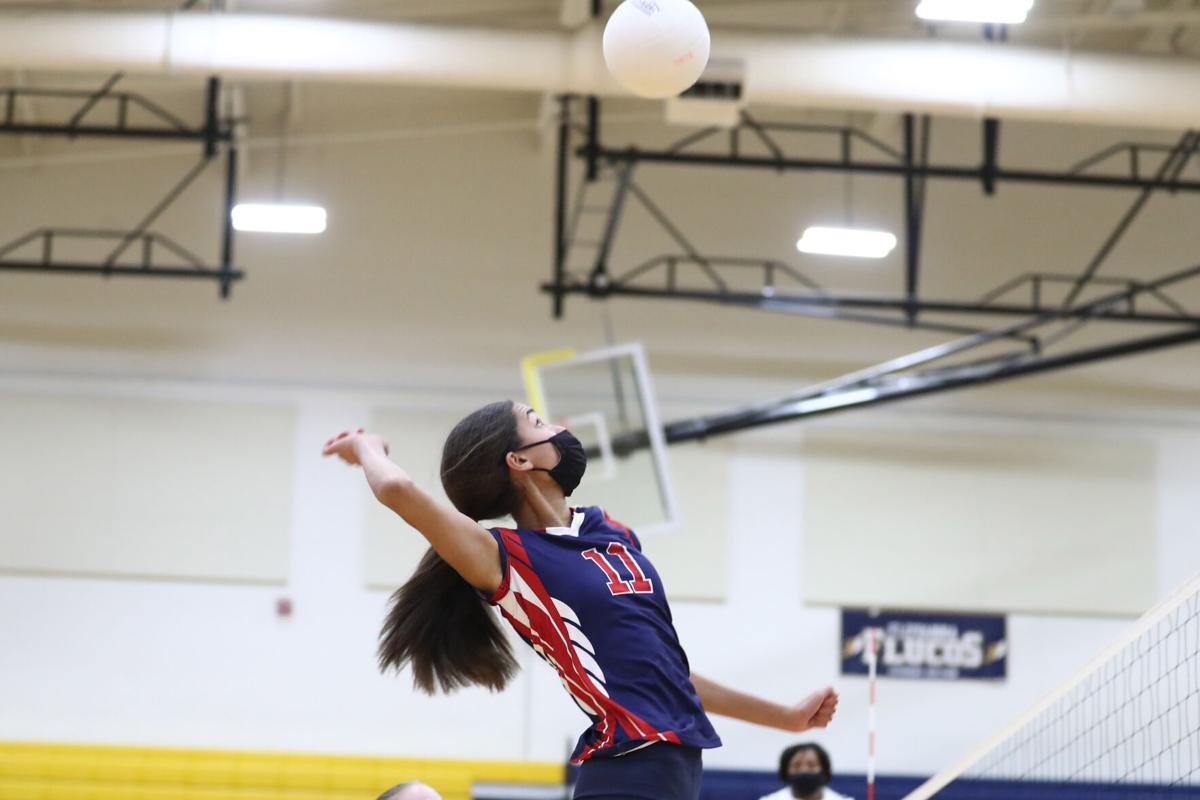 Albemarle’s Maya Winterhoff serves the ball during a match against Fluvanna County.

Maya Winterhoff’s stomach was in knots on the first day of tryouts for the Albemarle High School volleyball team during her freshman year.

“When I went to the first day of tryouts, my freshman year, I almost didn’t go because I felt so sick,” Winterhoff said. “I was so nervous.”

Winterhoff was able to overcome those nerves and went to the tryouts. Four years later, the 6-foot-2 outside hitter has become the marquee high school volleyball player in Central Virginia.

“If I told freshman-year Maya that I would be here right now, she would not believe me,” Winterhoff said.

Winterhoff has been a model of consistency for the Patriots throughout her high school career at Albemarle. From starting her career as a front-row specialist as a freshman to developing into a full rotation performer three years later, the reigning Central Virginia Player of the Year has continued to fine-tune her game.

Last spring, she turned in her best season of her career, leading the Patriots to Jefferson District and Region 5D championships. She led the team with 265 kills and 17 blocks while posting a .423 hitting percentage as the featured hitter for first-year Albemarle coach Lance Rogers.

“Last season was honestly a dream, except that I wish we hadn’t lost our last game,” she said. “I wouldn’t change a thing about it, not one person on the team or neither of our coaches. I maybe wouldn’t even change COVID. It all led to the best season of volleyball I probably will ever have. Every person on that team had something that season that motivated them more than in a normal year and together we were able to use that to complete what I had worked for ever since I started playing at Albemarle.”

After making the Albemarle varsity team as a freshman, Winterhoff committed herself to improving both as a player and as a person. She credited her teammates for making her feel like part of the team immediately and their ability to pass along knowledge of the game, which helped her confidence grow.

“I was a completely different player from the first day of tryouts freshman year to my first-ever high school game,” Winterhoff said. “I had maybe 20 practices during that time and my improvement was completely from the girls on the team.”

Prior to high school, Winterhoff was right-side hitter, but former Albemarle Coach Mark Ragland decided to switch her to the middle to get her playing time right away and help complement Adalee Lynch.

“I didn’t know I was going to be playing middle that year,” Winterhoff said. “I had never played middle before, so I’m very proud looking back it, seeing how I was able to adapt to a new position.”

In addition to her success on the court that year, Winterhoff also met her best friend, Esther Amos, who was a senior on the team. She also formed strong bonds with the rest of her teammates, including Lynch, who now plays at Johns Hopkins, and Keira Roach, who will now plays volleyball at Susquehanna University.

“It was a dream to be able to play with all of those girls, college level or not,” Winterhoff said. “I learned something from each one of them. Some things volleyball-related and some things just about life.”

As a sophomore, Winterhoff transitioned from a defensive stopper in the middle to a viable hitting option for the Patriots. She ranked second on the team with 265 kills, posted 64.5 blocks and led the team in hitting percentage (.383) to garner all-district and all-regional honors.

“My role my freshman year was definitely blocking,” she said. “Then my sophomore year, my role was hitting and blocking as well. When Adalee wasn’t getting the set, it would come to me when possible, so I was able to take some of the weight away from Adalee to give her better opportunities to score.”

Last spring, Winterhoff’s game came full circle when Rogers slotted her as a full-rotation player as an outside hitter for the first time in her high school career. Winterhoff said learning new positions during her first two season made the transition easy.

“My junior year, I had to change positions again, at least that time I was a bit more prepared,” she said. “Although I had never played outside before that season, I at least had known going into it that would be my role on the team. I had almost never played serve receive in a game before that season. Luckily, that was always my favorite part of practice, so I at least had practiced it, but practicing and executing in a game situation are very different. I absolutely love playing in the back row, so I was very excited for this opportunity.”

Not only did Winterhoff hold her own passing from the back row, she flourished as the Patriots’ top hitting option at the net.

“It is a lot of pressure knowing that when a lot of teams are preparing to play us, they are spending a lot of their practice focusing on what to do when I’m hitting,” she said. “But I personally love playing in high-pressure situations. Knowing that the other team is so concerned about me is huge confidence booster. If the other team is going to adjust how they play to me, then it leaves holes on the court for the rest of my teammates. You never want to leave holes on the court. It leaves lots of good opportunities for them to execute.”

Nowhere was this more evident than the Region 5D championship match against Mountain View, where she posted a career-high 38 kills, which ranked sixth in Virginia High School League history for most spikes in a single match.

The versatility Winterhoff displayed in the regional championship match was crafted during several years of having to adapt to playing different positions and diversifying her skill set.

“The thing that has best helped me prepare for this was honestly being able to get so much experience at so many different positions,” Winterhoff said. “This way, I am more valuable to the team and can fit in wherever. But it has also given me confidence to know I can be effective at any spot on the court. Playing with all these amazing girls, and just having them push me each and every day, built up my confidence and have helped me improve my skills all in one.”

With her final high school season starting next week, Winterhoff once again has high expectations for herself and her team.

“This season, just like every other, my goal is to win,” she said. “Also, since we lost so many seniors, I hope that we are able to really get to know all of the new players and freshmen and improve each game as a team. Individually, I would like to do just as well as last year. If any of my numbers are as good as last season, I would be proud of myself.”

After her senior season at Albemarle, Winterhoff will continue her volleyball journey at Appalachian State University. Winterhoff verbally committed to the Mountaineers following her sophomore campaign and is eager to experience everything the Boone, North Carolina, school has to offer.

“I am so beyond excited to play at App State next year,” Winterhoff said. “The biggest reason I am so excited is because Appalachian State is where I wanted to go to school. I would have been happy to be there, even it if it wasn’t playing volleyball, so to have that opportunity to go to my dream school and represent them while I play is very exciting.”

Winterhoff’s journey to become a Division I college volleyball commit started with a decision to set aside her nervous feelings and try out for the Albemarle volleyball team as a freshman. It’s a journey that Winterhoff will always treasure.

“I think freshman-year Maya would not be more proud,” she said.

Albemarle’s Maya Winterhoff spikes the ball during a match.

Albemarle’s Maya Winterhoff serves the ball during a match against Fluvanna County.