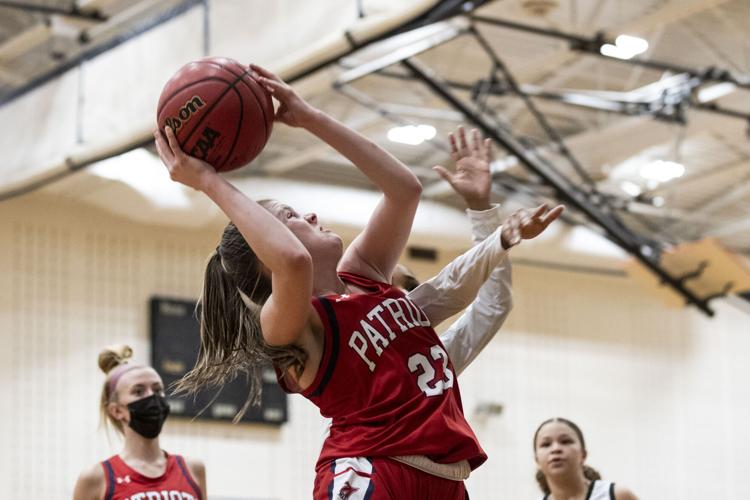 Albemarle guard Lauren Grady goes up for a shot during a Jefferson District game against Monticello on Thursday. 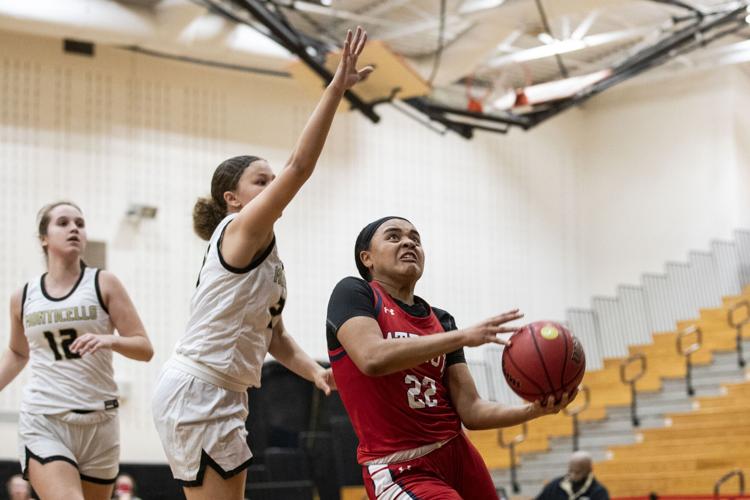 Albemarle guard Amaya Pendleton, right, goes up for a shot during a Jefferson District game against Monticello on Thursday.

It had been six days since the Albemarle girls basketball team capped off a sensational week with victories over Jefferson District rivals Louisa County and Charlottesville to earn sole possession of first place in the district standings.

On Thursday, Lauren Grady and the Patriots made sure that feeling would stick around a little longer.

Grady scored 16 of her game-high 19 points in the first half as Albemarle extended its winning streak to five straight games with a 70-50 road victory over Monticello.

“We definitely had a big break off of snow, and off of the Christmas break, but we were still in the gym every day working hard,” Grady said. “At practice, there’s no layoff. We’re still grinding and pushing as hard as we can all the time and that really shows when we go and outrun a team like that.”

Despite the layoff because of inclement weather, Albemarle (7-3, 5-0 Jefferson District) looked no worse for wear as it jumped out to an early 15-0 lead midway through the first quarter. Four different players scored for the Patriots, including five from Grady.

The Albemarle defense also was sharp, forcing seven turnovers, including five steals, to take a 22-5 lead after one quarter.

Monticello rallied in the second quarter thanks to some quality possessions in transition. Octavia Mills scored four points and Samantha Shifflett beat the Patriots down the floor for a layup to trim the lead to 29-14 with 3:48 remaining in the half.

A Cedasia Yates bucket for Monticello (4-7, 3-4) cut the lead to 32-19 before Albemarle cranked up the defensive pressure and responded with six points off turnovers to take a 38-22 lead at halftime.

In the third quarter, Coach Rachel Proudfoot’s Patriots came out on fire, opening the half on a 10-0 run, including 3-pointers from Kaley Maynard and Riley Maynard to give Albemarle a 45-25 advantage with 4:54 left in the quarter.

Monticello continued to battle and tried to make a game of it in the fourth. Mills scored six points during a 12-2 run that cut the lead to 55-42 with 5:38 left.

That would be as close as the Mustangs would get as Albemarle pulled away down the stretch to cruise to the double-digit victory.

With several three-game weeks ahead of them, Grady and the Patriots understand they must continue to remain sharp if they want to stay atop the district standings.

For now, the view at the top is pretty sweet.

“It feels amazing,” Grady said. “We’ve worked so hard every single day at practice and we work hard every day in games and I think it really shows. It’s really, really exciting.”

US Soccer reaches equal pay agreement for men and women

‘Of course’ Tony Bennett wanted Kihei Clark back at UVa

‘Of course’ Tony Bennett wanted Kihei Clark back at UVa

‘Of course’ Tony Bennett wanted Kihei Clark back at UVA

‘Of course’ Tony Bennett wanted Kihei Clark back at UVA

Albemarle guard Lauren Grady goes up for a shot during a Jefferson District game against Monticello on Thursday.

Albemarle guard Amaya Pendleton, right, goes up for a shot during a Jefferson District game against Monticello on Thursday.