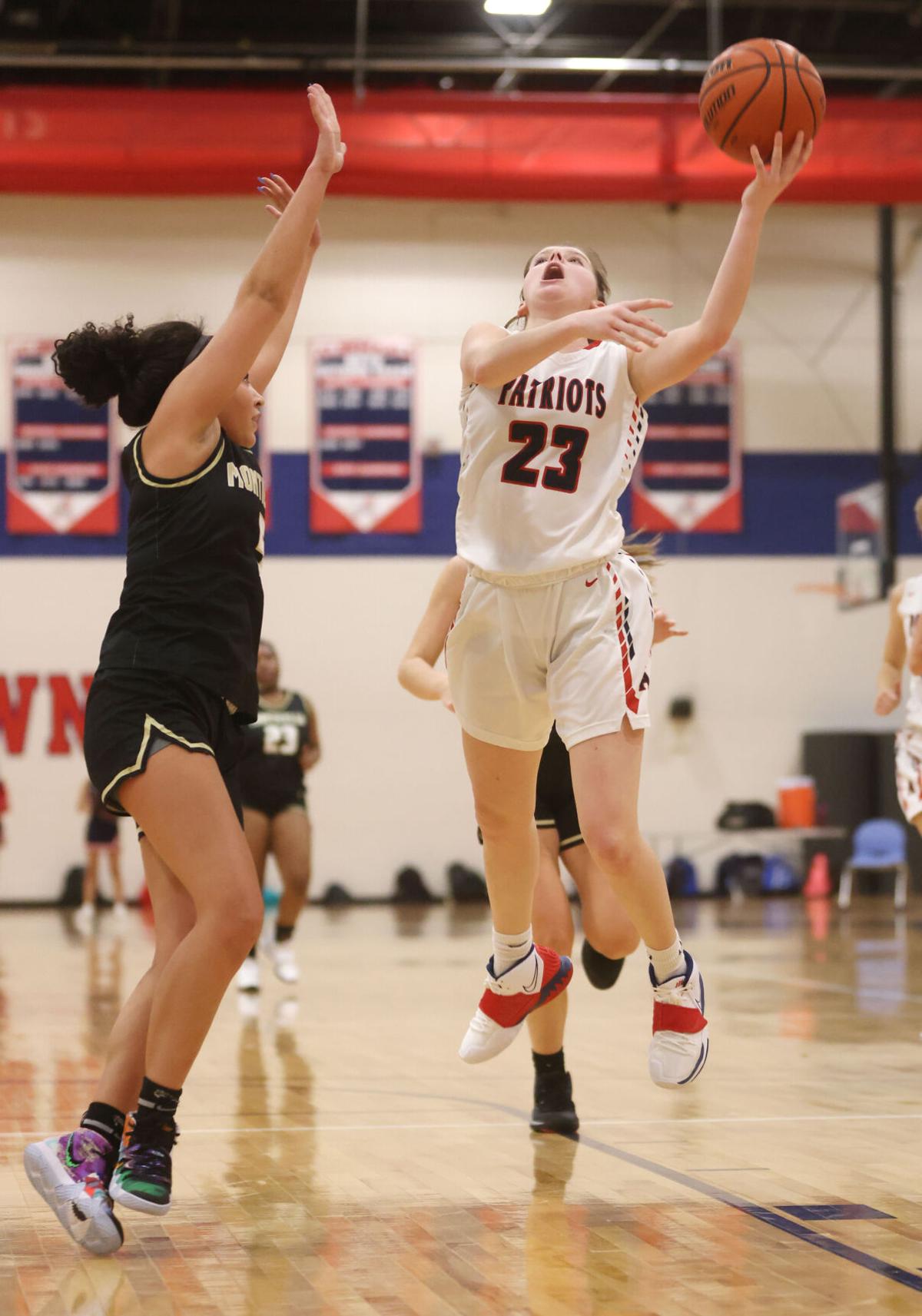 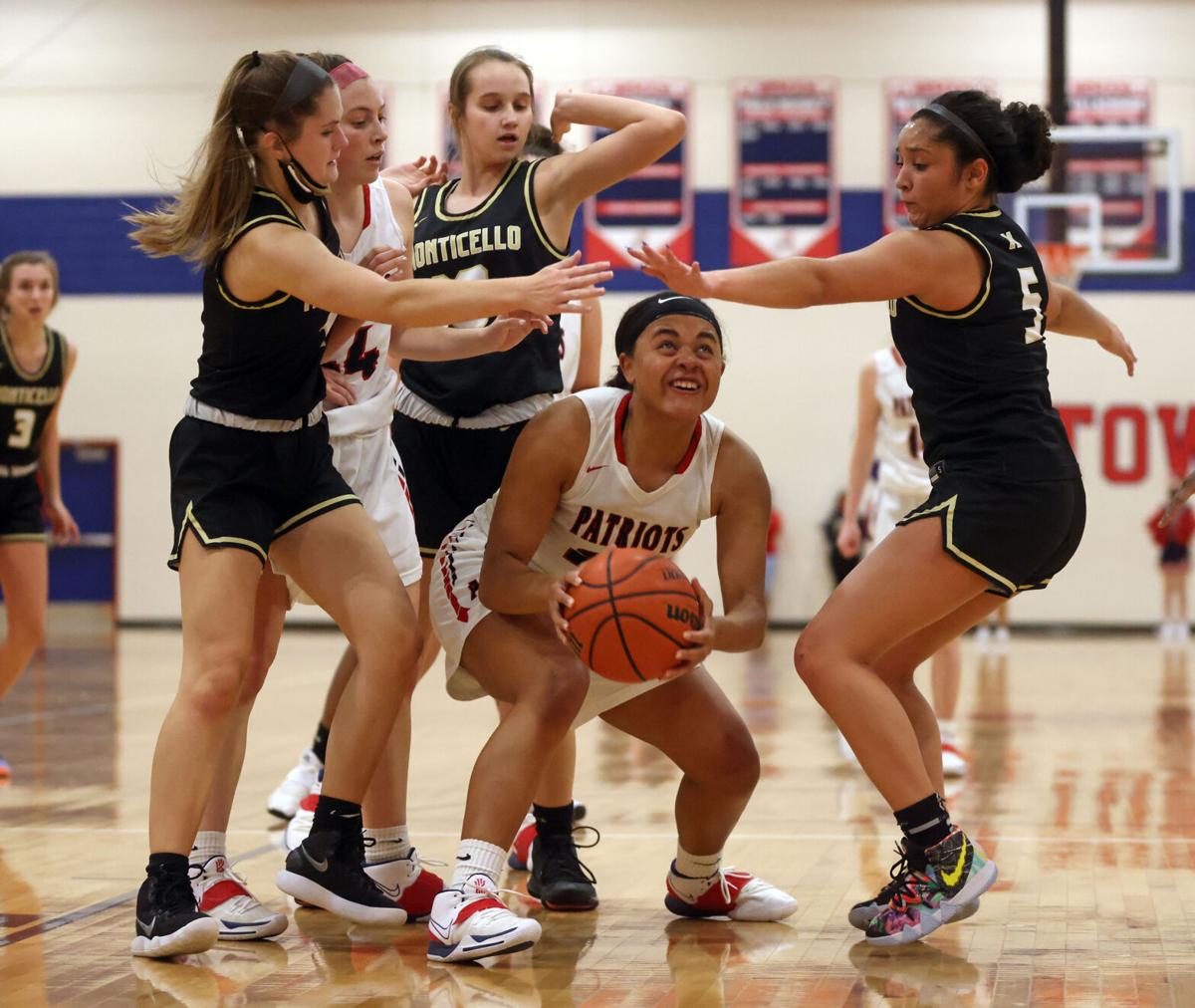 Albemarle girls basketball coach Rachel Proudfoot called timeout less than a minute into Wednesday’s game against Monticello after her team turned the ball over on its first two possessions.

“I just wanted to wake them up,” Proudfoot said of the early timeout. “You know what you’re doing and you know how to fix it and you’re capable. It was just one of those timeouts where, ‘Whoa, whoa whoa, we’re not going down that route tonight’ and I think that was big.”

The Patriots coach was all smiles the rest of the way as Albemarle got on track and topped Monticello, 46-35. Amaya Pendleton scored 14 of her game-high 19 points in the second half to spark the Patriots.

“I told her, ‘While you’re taking this 30-second break, this team needs to jump on your shoulders,’” Proudfoot said. “They have to be willing to follow that momentum. She’s shooting a lot, but it’s the confidence she has, but it’s the other things that she does. It’s the things that she’s done for the last two years — the dirty work, hustle plays, rebounding and just getting to the rim. That’s the kind of stuff that she does and I think it’s well worth noticing.”

Playing for the second time in four days, Monticello took command early on thanks to the play of Jaylyn Benedetto. The junior guard scored three points and Katelyn Williams added another bucket to give the Mustangs a 7-2 lead with 3:48 left in the first quarter.

Albemarle (1-2, 1-2 Jefferson District), who made just one of its first eight shots, found the range midway through the quarter to tie the game. Pendleton hit a long jumper, then Lauren Gray canned a 3-pointer to knot the game at 7-7 after one.

The Mustangs regained the lead early in the second quarter on a Benedetto bucket with 7:42 left. The lead would be short-lived. The Patriots went on an 16-1 run to seize command of the game. Kaley Maynard drained two shots from distance and Sanaia Wilson added another as Albemarle built a 23-12 lead at intermission.

The third quarter belonged to Pendleton.

The junior forward scored eight points to give her team a commanding 34-15 lead with 1:49 left in the third quarter. Pendleton found motivation from the other Albemarle players on the floor.

“It was my teammates, honestly,” she said. “They push me every game, every practice, every day. They want me to be better and play for them. We play for each other.”

Monticello (1-3, 1-3) was able to cut the lead down to single digits late in the fourth quarter thanks to some pressure defense. Octavia Mills and Katelyn Williams each scored four points during that span for the Mustangs.

Pendleton was proud of her team’s effort.

“We learned we had to be relentless,” she said “We have to get on the boards, we had to box out because they’re really strong. They’re a fast team and really aggressive, so we just had to get that rebound and run in transition and just play fast.”

Lauren Grady added seven points, while Maynard chipped in a pair of 3-pointers to finish with six points for Albemarle.

Proudfoot noted the importance of Wednesday’s win for the Patriots’ confidence.

“I was just so proud of them, coming back 0-2 after two close games,” she said. “We’re just so fresh. We’re trying to gel. I was really proud of our defense and we made a lot of hustle plays out there.”

“It is amazing,” she said. “We’ve waited for this; we’ve trained for this. We had a great game plan against Monticello and we executed.”