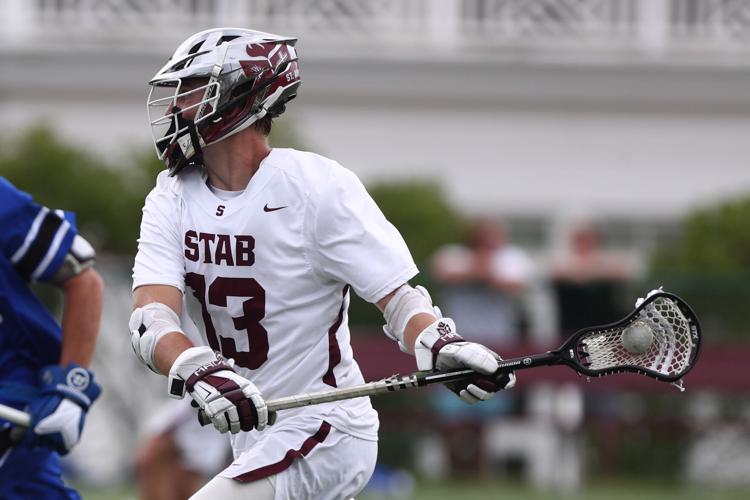 St. Anne’s-Belfield’s Tim Myers moves the ball during a game against Blue Ridge. Myers has committed to Virginia. 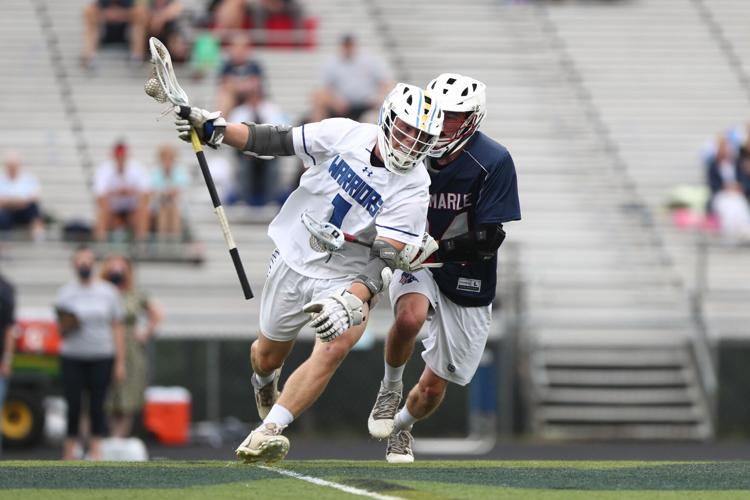 Western Albemarle midfielder Tyler Spano, front, moves with the ball during a game.

Myers continued the legacy of standout midfielders to excel for the St. Anne’s-Belfield boys lacrosse program. The senior midfielder registered a team-best 68 goals and 37 assists to finish with 105 points as the Saints reached the Virginia Independent Schools Athletic Association Division I quarterfinals. He scooped up 82 ground balls and was a first-team All-Virginia Prep League and VISAA all-state honoree. Following the season, the UVa commit was recognized as a U.S. Lacrosse All-American.

Hurley tallied 55 goals and posted 20 assists to rank third on the team in scoring. He was a first-team All-Prep League and VISAA all-state performer. He will play lacrosse at Navy.

Recognized as one of the top faceoff men in Central Virginia, Spano continued to develop his all-around game. He scored 42 goals and added 31 assists to finish the season with 73 points for the Warriors. He registered a team-high 270 ground balls, which ranked tops in the state, won 316 faceoffs and caused 10 turnovers. He was a first-team All-Jefferson District, All-Region 4A and VHSL Class 4 all-state performer.

Booth emerged as one of the elite young scorers in Central Virginia this spring. He tallied a career-high 60 goals and added 41 assists to join teammate Tim Myers as a 100-point scorer for the Saints. He garnered first-team all-Prep League honors.

Monroe tallied 43 goals and finished with nine assists for a Tigers team that reached the VISAA Division I state playoffs. He was a first-team All-Prep League performer and was named a U.S. Lacrosse Academic All-American.

Despite missing a couple games with an injury, Reilly posted 38 goals and 18 assists to finish with 56 points. He also collected 37 ground balls for Western Albemarle. He was a first-team all-district and all-region performer and led the Warriors to another state tournament appearance.

King tallied 36 goals and added 24 assists to finish with 60 points. He won 68% of his faceoffs and tallied 164 ground balls to earn Jefferson District Player of the Year and second-team all-region honors for the Patriots.

Carden tallied 42 goals and nine assists and had a knack for making big plays at key times. He was a key cog in the Barons' run to a conference title and VISAA state tournament berth.

Whether it was scoring goals or setting up teammates for open looks, Myers was a steady force for Albemarle this season. He tallied 31 goals and added 17 assists to earn first-team all-district honors for the Patriots.

Messinger was among the team leaders in goals (44) and assists (31) for the Mustangs. He earned first-team All-Jefferson District and All-Region 4A honors and was a second-team VHSL Class 4 all-state selection.

Ryan ranked second on the team with 41 goals and added eight assists to finish with 49 points. He also helped the Barons win the Virginia Independent Conference title and earn a berth in the VISAA state tournament.

O’Keefe was the anchor of the Tigers' defense and also contributed offensively. He tallied four goals and two assists and caused 40 turnovers en route to being named a first-team All-Prep League and Academic All-American selection.

Cosgrove routinely was tasked with neutralizing the top target on the opposing team and did so at a high level. A first-team all-district and second-team all-region performer, he finished the season with 23 ground balls.

Laing used his speed and toughness to shut down opposing attackers and help generate offense the other way. He was a first-team All-Prep League performer.

Hutson was a key cog in the defensive backfield for Albemarle this season. He had great instincts and stick work and a knack of getting in the shooting lanes of opposing players. He was a first-team all-district performer.

Burrell showcased tremendous athleticism and reflexes between the pipes and was a key cog in the Barons' run to a VIC title. The Colgate University commit was a first-team all-state performer.

On Wednesday following the Cavaliers’ first practice of training camp, senior defensive lineman Aaron Faumui said he’s never felt a responsibility on the field and within the locker room like the one he holds now.

We continue our UVa football opponent preview series with Old Dominion, which will bring a new-look offense to Scott Stadium in September.

UVa DC Rudzinski on the defense

St. Anne’s-Belfield’s Tim Myers moves the ball during a game against Blue Ridge. Myers has committed to Virginia.

Western Albemarle midfielder Tyler Spano, front, moves with the ball during a game.