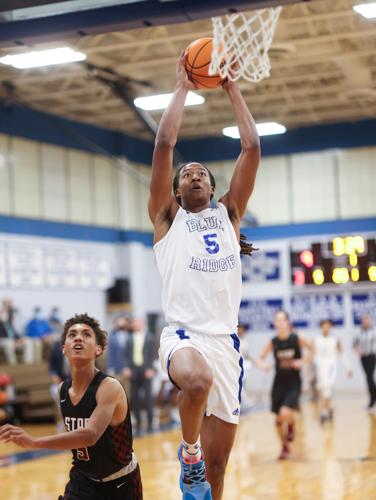 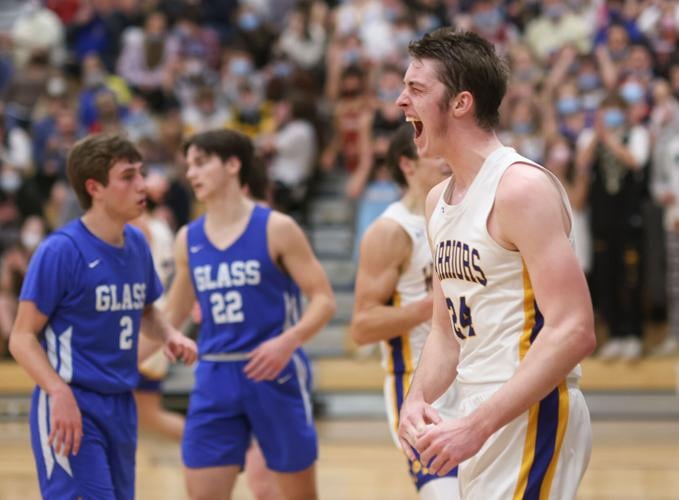 Western Albemarle's Joshua Sime reacts to a play during the Region 4D championship game against E.C. Glass in Crozet.

After starting his career as a defensive stopper, the 6-foot-8 forward expanded his offensive skill set and developed into one of the top basketball players in his class in the country. As a senior, Brown averaged a team-high 15.4 points, 11.1 rebounds, 2.4 steals, 2.2 assists and 1.5 blocks to help the Barons claim a fourth straight Virginia Independent Schools Athletic Association Division II state title. The Syracuse commit was named Blue Ridge Conference and VISAA Division II player of the year.

Sime was a model of consistency and an imposing force in the paint for the Warriors this season. The 6-foot-8 forward averaged 10.6 points, 6.7 rebounds 1.6 assists, 1.3 blocks and 1.1 steals a game to lead Western Albemarle to Jefferson District and Region 4D championships. He was named the district and regional player of the year and was a VHSL Class 4 first team all-state performer.

Lang had a breakout season this winter as he helped lead St. Anne’s-Belfield to the Virginia Prep League Tournament championship. The 6-foot-8 forward averaged 18 points and 14.9 rebounds a game for a Saints team that qualified for the VISAA Division I state tournament. He was named Prep League co-player of the year and was a first team all-state performer.

Wesson flourished in an expanded offensive role this season for Albemarle. He led the Patriots in scoring at 13.1 points per game to go along with 4.3 rebounds a night and converted 43 3-point opportunities as the Patriots reached the VHSL Class 5 state quarterfinals. He was a first team all-Jefferson District and all-Region 5D performer as well as a second team all-state performer.

Shifflett was nothing short of sensational this winter as the go-to scorer for William Monroe and coach Brett Maynard. The guard averaged 18 points, 3.9 assists, 3.2 rebounds and 1.5 steals a game to lead the Greene Dragons to the Northwestern District title and a VHSL Class 3 state tournament berth. He was named Northwestern District and Region 3B player of the year. He was also a first team all-state performer.

Gardner emerged as one of the most dynamic players in the Jefferson District this winter for Fluvanna County. He averaged 17.3 points, 8.5 rebounds and 3.9 assists a game to help the Flucos reach the Region 3C championship game and earn a VHSL Class 3 state tournament berth. Gardner was a first team all-Jefferson District and all-Region 3C performer as well as a first team all-state selection.

Ball quickly made a name for himself in his first season with the Miller School boys basketball program. The 6-foot-7 swingman averaged 12.5 points, 3 rebounds and 1.4 steals a game for the Mavericks as they reached the VISAA Division II state semifinals.

On Wednesday following the Cavaliers’ first practice of training camp, senior defensive lineman Aaron Faumui said he’s never felt a responsibility on the field and within the locker room like the one he holds now.

We continue our Virginia football opponent preview series with Illinois, which aims to build off its strong finish to last season.

Teel: Tony Elliott relies on 'living, breathing examples of what it means to be a Cavalier'

As Tony Elliott approaches his first season as Virginia’s head coach, there is one tenet he has co-opted from Dabo Swinney: Embrace the program’s heritage and make everyone linked to Cavaliers football feel welcome.

We kick off our Virginia football opponent preview series with a look at Richmond, which will bring a new-look offense to Scott Stadium for the season opener on Sept. 3.

Western Albemarle's Joshua Sime reacts to a play during the Region 4D championship game against E.C. Glass in Crozet.