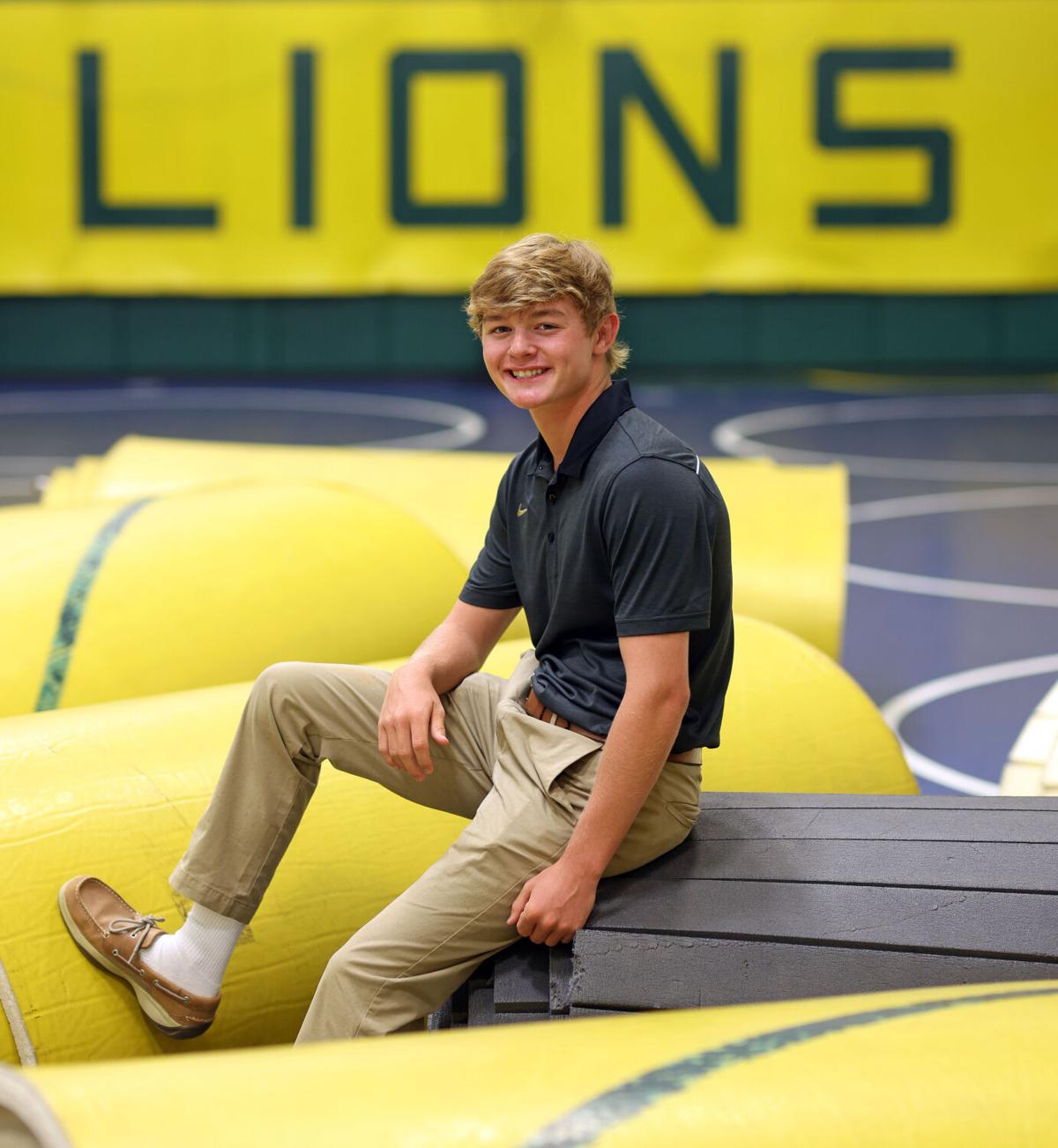 Louisa County wrestler Owen Greslick is the Central Virginia wrestler of the year, 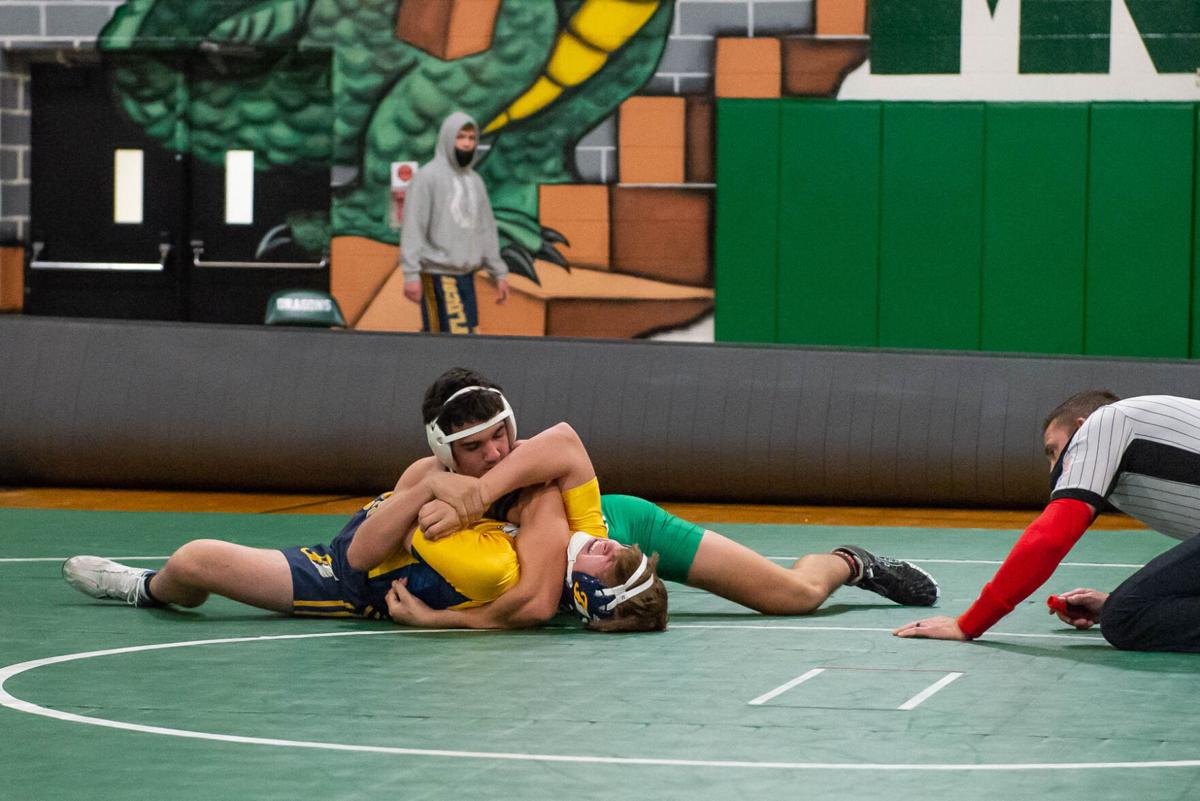 William Monroe wrestler Chris Taft looks to the ref as he pins his opponent from Fluvanna County on Jan. 9.

After capturing his second Region 4B championship, Greslick capped the season off on a high note by winning his first VHSL Class 4 state wrestling title. The junior posted a 17-1 record on the season, including a 7-5 decision over John Handley’s Cam Gordon in the 120-pound state championship match. He joins Gabriel Shelton (1989) and John Wittenburg (2006) as the only Louisa County wrestlers to win an individual state title.

Metcalf finished off a sensational wrestling career with another state tournament appearance for Fluvanna County. The senior posted an 11-2 record on the season and finished third at the VHSL Class 3 state tournament in the 160-pound division.

Rogers had a fantastic debut high school wrestling season with Orange County. The freshman posted an impressive 13-5 mark for the year and qualified for the VHSL Class 4 state tournament. He dropped a 3-0 decision to Smithfield’s Evan Christoffer in the third-place match in the 106-pound division.

Edwards turned in a solid season for the Albemarle High School wrestling team. The senior standout qualified for the state tournament and reached the medal round of the VHSL Class 5 state championships, finishing sixth.

The junior won four of his six matches on the season, including a fall over William Byrd’s Jerze Webb to finish fifth in the 182-pound division at the VHSL Class 3 state wrestling championships.

Pack posted double-digit wins in his first varsity season at Madison County. The 106-pound freshman registered a 10-6 mark on the season, including a pin over Patrick County’s Nathaniel Gusler in the fifth-place match at the VHSL Class 2 state wrestling championships.

The junior posted a 16-6 mark on the season to secure a berth in the VHSL Class 3 state wrestling championships. He reached the medal round and finished sixth.

Marcotte had a breakout season for the William Monroe wrestling team this winter. The junior posted an 18-8 record and earned a spot in the VHSL Class 3 state wrestling championships. He finished sixth in the heavyweight division.

Burley was on his way to a state tournament appearance before COVID-19 contact tracing the day before the Region 4B tournament ended his season. The senior posted an 11-1 record in the 182-pound division and was a two-time regional champion.

The sophomore posted a 12-4 record in the 126-pound division and finished third at the Region 4B championships with losses to the eventual state champion and third-place finisher.

Turner registered another strong season for Orange County. The senior compiled a 12-3 season record and finished third at the Region 4B championships. Two of his losses were to the eventual state champion and another was an injury default following a concussion to the state runner-up.

Was the Brewers-White Sox series a preview of the 2021 World Series?

The current deal between ESPN and Comcast runs out in September, according to sources.

The Tokyo Olympics opening ceremonies are less than a day away. Here are the latest headlines from Japan, plus a look ahead at what's to come.

UVa's Taryn Tkachuk stands out in an athletic family that includes a five-time NHL All-Star and two top 10 draft picks. “She just has that natural athletic gene. I like to say we all do in the family, but hers is another level.”

Virginia safety Joey Blount is thankful for the opportunity to return for a fifth season with the Cavaliers and is viewing this season with enhanced urgency.

The 2020-21 Central Virginia wrestling coach of the year is Louisa County's Roger Stewart.

Louisa County wrestler Owen Greslick is the Central Virginia wrestler of the year,

William Monroe wrestler Chris Taft looks to the ref as he pins his opponent from Fluvanna County on Jan. 9.