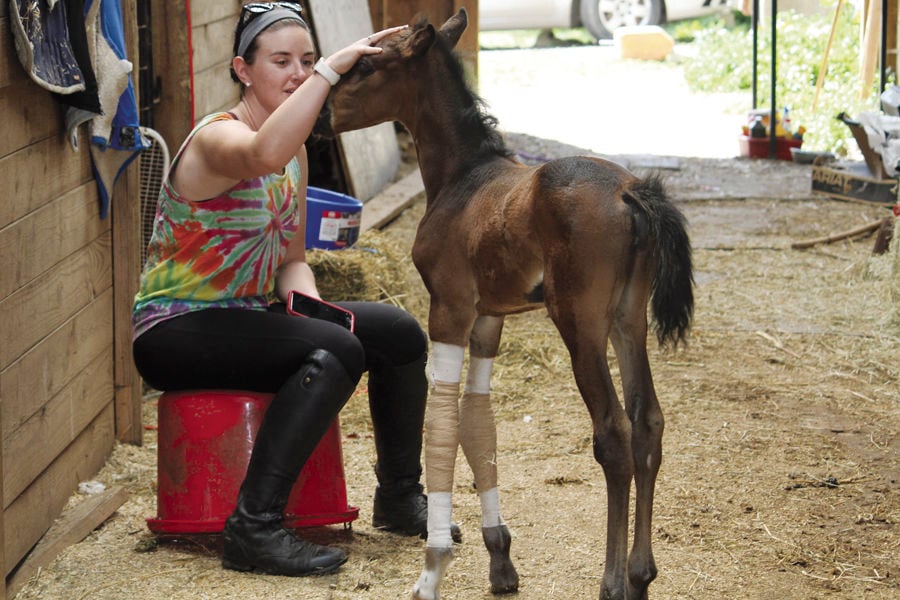 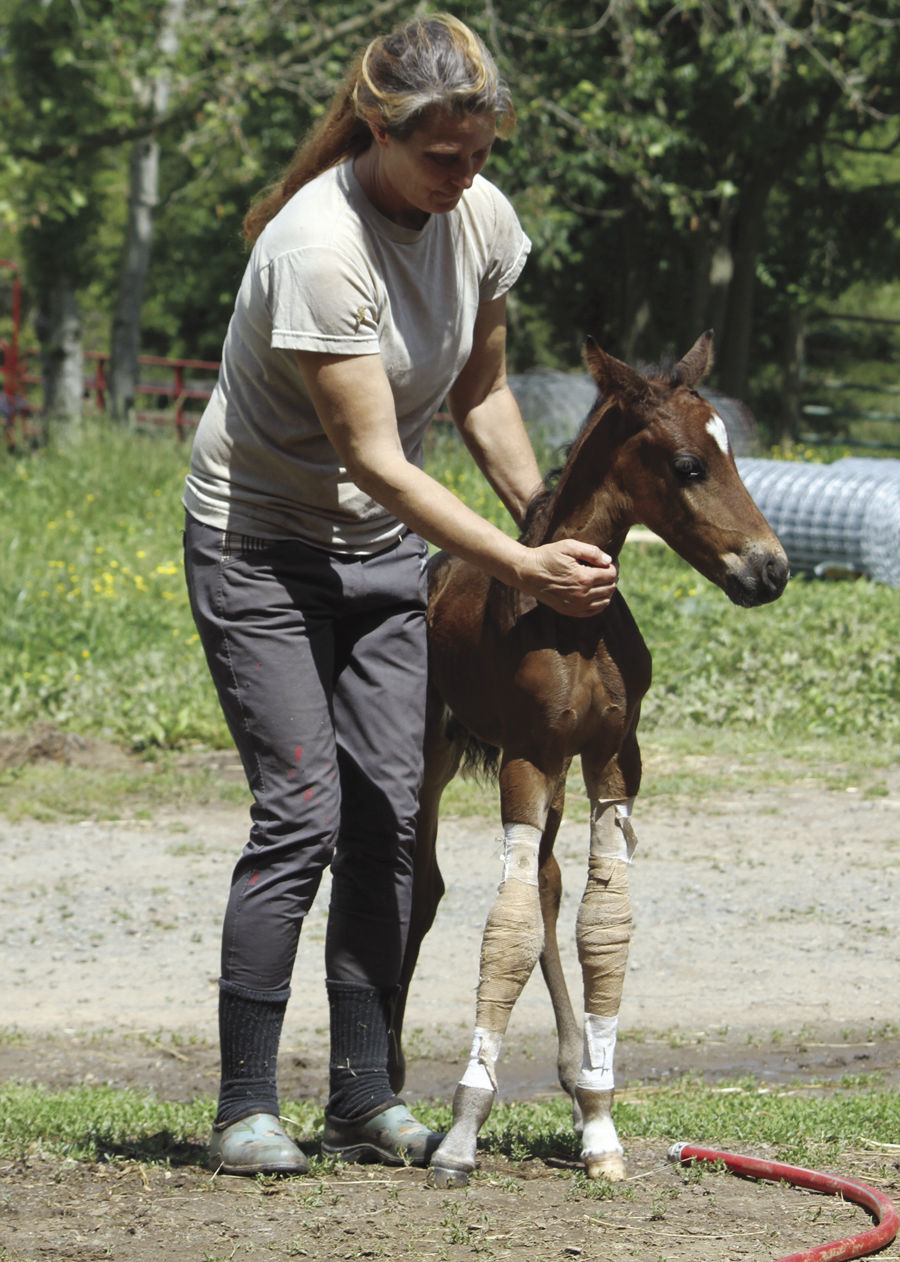 Breeder Sarah Warmack leads Tiny out of the barn for some fresh air and exercise.

Breeder Sarah Warmack leads Tiny out of the barn for some fresh air and exercise.

Anyone who has ever spent time around horses knows to expect the unexpected. Gordonsville horse breeder Sarah Warmack got a hefty dose of the unexpected on April 29, 2020 when her Thoroughbred mare, Cricket, delivered twin foals.

Twin births in horses are rare. Odds of survival of both foals and mom aren’t good and equine reproductive specialists estimate that less than one in 100 twin pregnancies results in a positive outcome. The equine uterus is just not designed to support two simultaneous pregnancies. Diligent horse breeders aim to avoid the possibility with regular ultrasound checks 14 days post breeding. Early in a pregnancy, twin reduction is possible and veterinarians commonly perform the procedure with little risk to the mare and remaining embryo.

Warmack is one of those conscientious breeders and when Cricket was examined 14 days post breeding there was no sign of a twin pregnancy. Generally, the heartbeat of the embryo can be seen on ultrasound after 24 days. When Cricket was examined at 25 days, the ultrasound showed a single embryo and single heartbeat. Cricket an experienced broodmare, went through most of her pregnancy without revealing any clues that she was carrying twins.

Warmack, an experienced horse woman knows her mares well. Cricket had always been an honest, 340-day mare, carrying her foals to the textbook due date. This year when, Cricket held on a little longer past her mid-April due date, Warmack just attributed it to her increasing age.

On April 24, Cricket went into labor and delivered a big bay colt. Warmack was watching the newborn when Cricket popped out another foal, a tiny bay colt.

“It was completely unexpected,” said Warmack. “Cricket delivered this beautiful bay colt and then I saw something else coming out of her—this rack of bones that was breathing.” “Oxford (the first foal) got up and nursed but Tiny was small and weak. I syringed colostrum into him and was able to help him up.”

The next day, veterinarian Brooks Vardell came out to check mother and foals and while Oxford had a great check-up, Tiny was still struggling. Vardell treated him with antibiotics and tube-fed him some colostrum. Warmack had to help the tiny foal up and feed him from a bowl. Cricket and Oxford were thriving and Tiny was still hanging on—drinking from a bowl every one and a half hours around the clock because his mother refused to accept him.

For the first week, Warmack wasn’t sure Tiny would survive. Newborn foals are fragile creatures in the best of circumstances and the tiny twin certainly didn’t have much going in his favor. Warmack was happy to give the little guy a chance as long as it didn’t involve surgery or admittance to a hospital; both of which routinely cost thousands of dollars. As time went on, Tiny got stronger and he was beginning to grow and was starting to behave like a normal baby horse.

Because Tiny was unable to live with his mother and brother and because of his size and fragility, Tiny wasn’t able to have another of the farm’s horses as a companion so Warmack found him a goat for companionship. Horses are herd animals and are often stressed by solitary living. Until a suitable equine companion is found, the goat keeps Tiny company.

Care of an orphan foal is time consuming. For the first month, feedings are spaced 90 minutes apart 24 hours a day. Caring for Tiny became the primary focus of Warmack’s life. She shared pictures and updates of the colt’s progress on social media where he quickly became a diversion from the pandemic.

“I posted stuff about Tiny’s progress on Facebook and people started calling and messaging me asking how they could help,” said Warmack. “His story really touched a lot of people and it has amazed me how far his story has spread. Tiny has a lot of fans from all over.”

Warmack made the colt his own Facebook page and he has over 2,300 followers watching his progress and antics.

Tiny has made it past his one-month birthday and continues to strengthen and grow. His legs which were crooked in the beginning have straightened and strengthened to the point that he no longer has to wear bandages and is beginning to frolic and play normally. Both Warmack and Dr. Vardell are hopeful that Tiny will overcome all his challenges and become a normal horse.

While most of Warmack’s horses are for sale she said Tiny will stay.

“After all this, he’s not going anywhere. It’s a miracle that he’s here,” she said.

Come in an rediscover the delicious sandwich that made New Orleans (and us) famous!

Take a Roman holiday with fresh mozzarella and Roma tomatoes on our Caprese Panini! Visit ou…