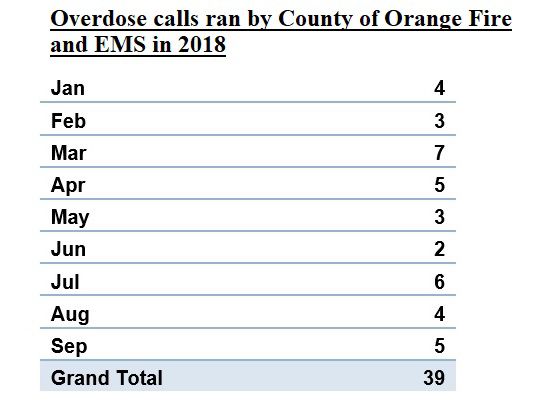 Chart of overdose calls ran by County of Orange Fire and EMS in 2018. 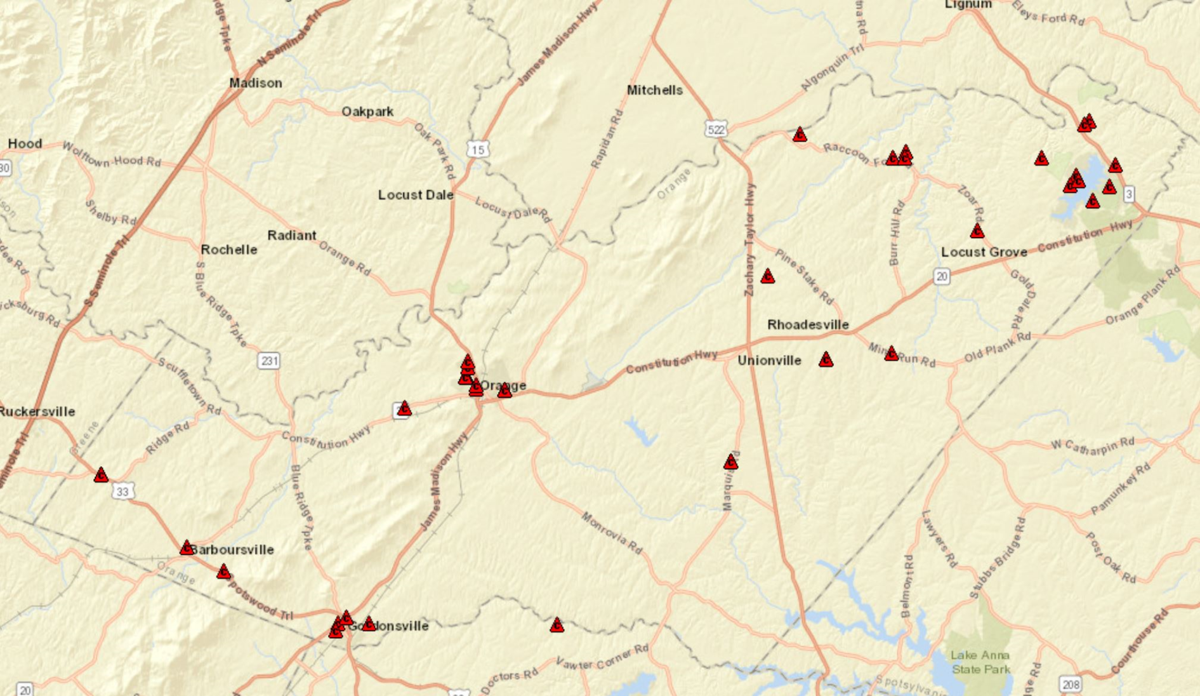 Map of overdose calls ran by County of Orange Fire and EMS from January to September 2018.

Chart of overdose calls ran by County of Orange Fire and EMS in 2018.

Map of overdose calls ran by County of Orange Fire and EMS from January to September 2018.

When Orange County’s Epidemic Intelligence Council (EpIC) was established earlier this year, its mission was not only to discuss the current opioid epidemic issue but also to take steps to combat it. As part of that mission, the council has welcomed guests to make presentations at monthly meetings. Most recently, the group of local law enforcement, health services, school and local government officials heard from two regional resources aimed at treating addicts: Boxwood Recovery Center and Addiction Recovery Services.

EpIC was developed by Orange County Department of Social Services Director Crystal Hale in an attempt to facilitate a collective, coordinated effort to address the opioid crisis. Since February, the group has met regularly for information sharing, education and collaboration.

Public education and a lack of resources for those facing an addiction have been among the top discussion points for the council. During a presentation by Dee Fleming, a Culpeper resident whose son died from an overdose last year, she said long-term treatment was imperative to get addicts help. When her son died, Fleming said she tried to seek resources but was disappointed with the lack of information available to drug users and their families. She began to gather information, resources and local data which she now publishes on her Facebook page “Culpeper Overdose Awareness,” as a way to “keep the conversation open and on the forefront of people’s mind.”

Members of the council also are disappointed by the lack of resources available for drug users. However, the group wants to learn about what resources are available for county residents and how to get more resources to the region, which is facing increasing overdose 911 calls, increasing foster care numbers and an increasing population at the Central Virginia Regional Jail.

Since the facility opened in 1986, it has been an abstinence program. However, on Nov. 1, it will become a medication-assisted program.

RRCS Executive Director Jim LaGraffe said the transition has been a big shift for staff, but one that is welcomed since medication-assisted treatment seems to be more successful.

“There is no one pathway to recovery,” he said.

Boxwood is a self-pay facility, with a sliding scale to make costs reasonable for patients. Boxwood does accept Medicaid. Proof of income is required as part of the admission process, which can be the primary cause of admission delays. Those who are currently using RRCS services have undergone the necessary financial screening. Prior to being admitted to Boxwood, clients must be deemed medically and psychiatrically stable.

While it can take anywhere from a day to a week to get admitted to Boxwood, Bernart said the facility is working on reducing the wait time.

“Right now we have an opioid crisis, but I don’t think we have a bigger addiction crisis than we used to,” he said, “It’s just with opiates and the ones we have now are far more lethal so we have a lot more overdoses.”

He said he there is a lot of controversy around medication-assisted treatment, but he urged people to be open to it because it’s helping long-term drug users have stable lives.

Addiction Recovery Systems (ARS) offers outpatient medication-assisted treatment to the residents of Orange, Culpeper, Madison, Louisa and Greene. The treatment center, located at Pantops, is one of eight ARS outpatient addiction treatment facilities in the Mid-Atlantic. The local center has approximately 400 patients.

In September, ARS intake coordinator and counselor Stacie Shifflet informed EpIC members on the treatment facility, which uses group and individual counseling, with prescribed doses of either methadone or suboxone to help get patients medically stable.

Jodi Herndon, senior counselor and pregnancy counselor with ARS, said the treatment offered at the center is individualized.

“Our whole purpose is to cycle out those that are in the beginning stages of addiction, where maybe abstinence is still an option for them, but they just don’t have the right resources or they aren’t aware what the resources there are, with those who have a dependency that expands anywhere from three to 15 years or longer,” Herndon explained. “Most research shows people tend to be more successful and have a longer stint in sobriety if they do medication-assisted treatment if they have been using over a certain period of time.”

When someone is admitted to the center, they discuss their addiction and treatment history with a doctor before the doctor determines which medication will stabilize them.

Attendance at traditional outpatient counseling services is required once a week for some patients, while more intensive cases require attendance three or four times a week. Medication-assisted treatment begins with daily visits but visits decrease over time.

“They dose daily in front of our nursing staff with the medications provided on site,” she said. “Everyone has counseling requirements that they have to work through in the program. Based on their history of use, we either help them to stabilize so they can get to a point where they can then taper off of the medication and we connect them to other resources in the community so they can continue to be successful, or for some of those patients will be on medically-assisted treatment continuously.”

According to ARS, 80 percent of its patients abstain from illegal opiates after 12 months of treatment.

“People think of medication-assisted treatment as trading one drug for another and don’t recognize it as true treatment,” said Lynn Blythe of RRCS.

Herndon said ARS has tried to educate patients, family members and the public on the differences of using medically-formulated substances and drugs.

ARS performs regular drug screenings and requires patients to report any medications they are prescribed.

The treatment center is a self-pay facility, but does accept different insurances. Medicaid also is accepted.

Shifflet said prior to Medicaid being accepted at the center, more than 10 patients daily would miss their medication appointments. However, with Medicaid paying for patients’ transportation, the majority of patients are making their appointments.

LaGraffe said transportation seems to be a barrier many RRCS patients can’t overcome.

“We service a five-county region but in some of our rural counties, like in Orange and Madison, we don’t have a great footprint,” he said.

RRCS is in the preliminary stages of developing a mobile medication-assisted treatment program, which would make it easier for some patients to get the care they need, he explained.

“Our treatment programs are valuable for those who can get there, but because of where they are located, we are excluding a significant number of people. It’s not a solution, but just one more option for people,” LaGraffe said. “I’m not satisfied with the equitable distribution of our services among the five counties we support.”

While there is a “huge local commitment to the problem,” he said he notices significant gaps in substance abuse services, like local transitional housing and vocational services. Getting addicts treatment is important, but LaGraffe said once recovering addicts get out of treatment they need a place to go for support so they don’t fall into the same cycle.

EpIC has discussed long-term treatment options as well as re-entry programs with additional guest speakers on those topics planned for future meetings.

For more information about EpIC, contact Hale at crystal.m.hale@dss.virginia.gov.