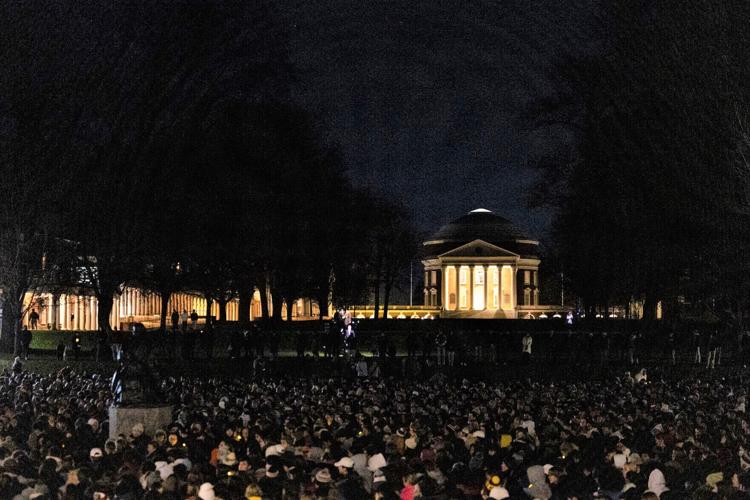 Members of the UVa community gather on The Lawn for a Nov. 14 vigil to honor those slain and wounded in a mass shooting on the campus Nov. 13. 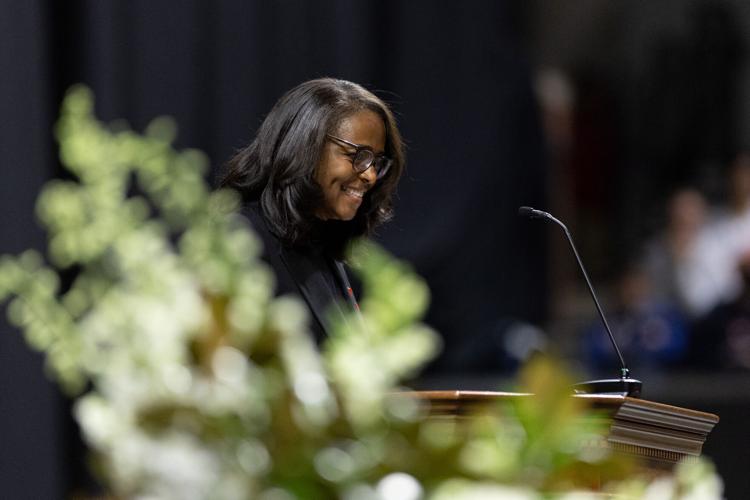 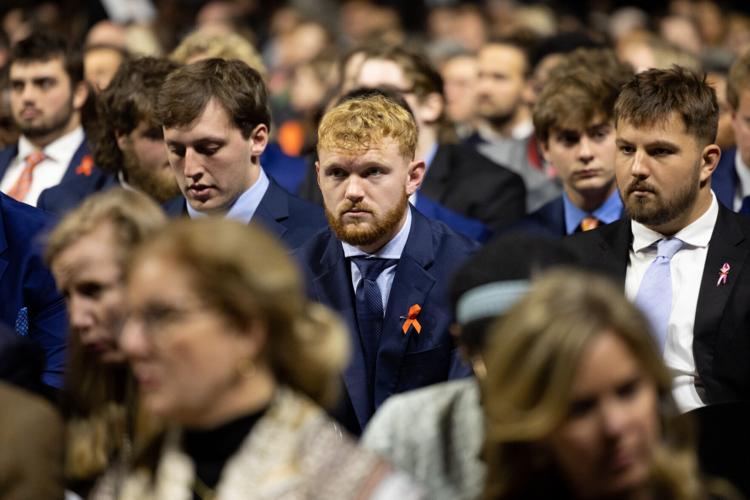 Virginia quarterback Brennan Armstrong attends the memorial service for his teammates. Over a thousand students and locals attended the Nov. 19 service at John Paul Jones Arena. 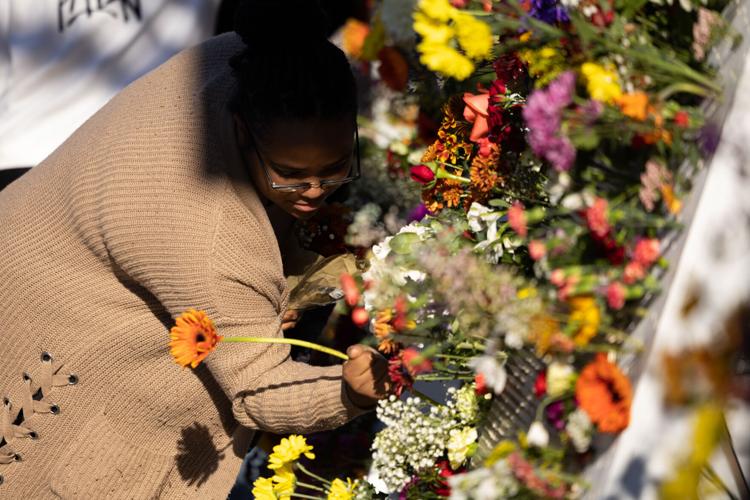 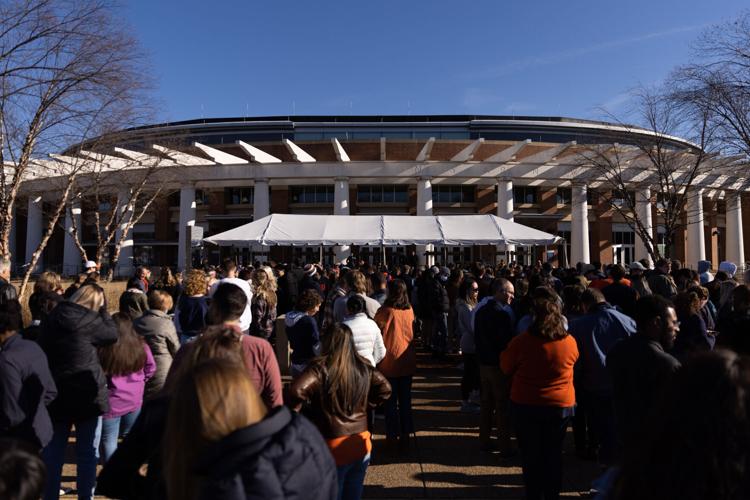 A crowd waits to enter a memorial service in Charlottesville, Va., Saturday, Nov. 19, 2022. 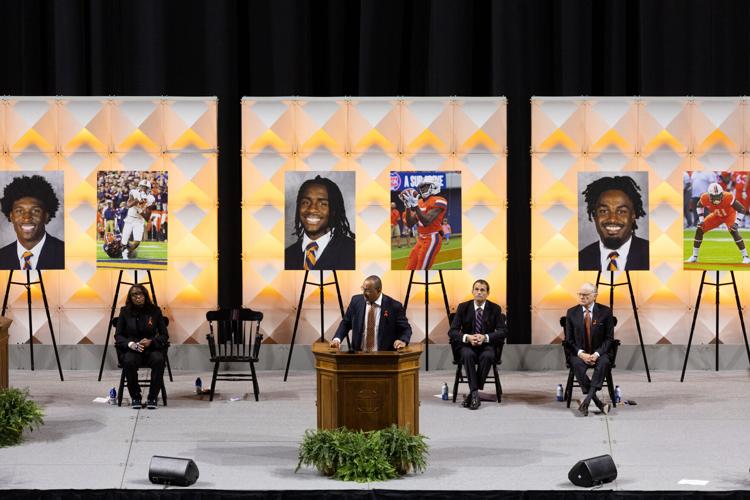 In the last Harry Potter film, Harry Potter and the Deathly Hallows Part II, Hogwarts is attacked by Voldemort and the Death Eaters. As the students are rushed to their quarters in a frenzy, Professor McGonagall casts a spell to wake the enchanted gargoyle warriors: “Hogwarts is threatened. Protect us, do your duty to our school.”

For whatever reason, this is what came to my mind the evening of Nov. 13, when I got the text from my boyfriend, Parker. He said he was okay, but that I should stay inside and lock my doors immediately. He and some students were studying in the University of Virginia Fine Arts Library, next door to the mass shooting on a charter that killed three students and wounded two others, one seriously. Parker and others in the Fine Arts Library heard the killer’s gunshots. They watched through the large glass windows as police ran with their assault weapons pointed. Finally, the sense of imminent danger registered, and they locked themselves in a windowless room.

After I saw Parker’s texts, university alerts arrived. They read “active shooter” and “RUN HIDE FIGHT.” Then instructions from other tenants in my building told people to turn off all their lights. Texts also relayed radio scanner reports of activity on my block, and friends’ texts said that I should barricade my doors, because I was alone in my first-floor apartment.

Parker and 20 others stayed in their room in the Fine Arts Library until 3:30 a.m. Nov. 14. Others were locked in labs of the Commerce School. Still others found a bunker below the Architecture school. The group in Clements Library slept there until morning. Another student reported on the local news that she spent the night alone in Wilson Hall, where she locked herself in an unheated classroom, shaking under the intermittent fluorescent light and darkness as she tried to get the motion-detecting lights to stay off and eventually crawled in a cubby.

Outside his house on Virginia Avenue, a friend of mine rescued a girl from the street. She was hiding from the uncaptured shooter behind a tree after getting a warning call on her walk home. She spent the night on my friend’s floor in hysterics.

Every student who was awake the night of Nov. 13-14 experienced a battle scene which violated our safe spaces and “happy places.” No one knew where the dark magic of a mass murderer might strike next. We were simply, in the dark.

When the sun came up, Nov. 14, the sadness set in. Since then, we have grieved the losses of Lavel Davis, Jr., D’Sean Perry, and Devin Chandler, and for all those injured. We also grieved for all the students who went on the field trip to a play in Washington before the outing turned deadly as one participant opened fire when the bus arrived back on the UVa campus. Those who survived without physical injury still scrambled in unimaginable terror at the blasts of gunfire. Some crouched in the aisle and risked their lives to ensure their friends did not die alone.

I have been comforted by my professors, many of whom have reached out to express their sadness for the loss of their own students, or to say class would be an optional space to gather and process the tragic events. This seemed like common courtesy to me, but some students did not receive the same academic leniency. One of my friends, outraged, sent me a screenshot of an email from a professor on Monday, Nov. 14. It read, “I just heard from the Dean’s office that we are not allowed to hold class today. I hate to give up the day, and it’s hard to know why a Zoom class is forbidden. But see you Wednesday, under happier circumstances, I hope.”

Another Commerce School student received an email—while locked in that room in the Fine Arts library. It stated that because of the active shooter situation on campus, the deadline for students to turn in assignments had been moved from 9 a.m. to 5 p.m.

This is deeply disturbing. The fact that students or professors should be stressed about their assignment dates during and following an active manhunt on campus is alarming by almost any measure. First, to send an email related to an assignment during an ongoing “shelter in place” order is at best insensitive, at worst, endangering, clogging students’ email chain as they seek information on the suspect’s location and await notice that it is safe to leave a barricaded room. That notice, by the way, came in the late morning. Then, to question why students would not be able to meet on Zoom the next day, after they had not only been up until sunrise, but also were processing their individual and collective traumatic experiences and reeling at deadly student-on-student violence seemed a fundamental misunderstanding of the gravity of a continuing crisis. We were awaiting word of the arrest of a murderer at large.

News of the arrest of the suspect came at 11 am. But this was followed many hours later by the arrest of another armed individual who had yet to cease posting videos of his myriad assault weapons and Tweets and Facebook posts that promised to “leave them on the floor with holes all in [their] body” and snap every last UVA student “in half like a Kit-Kat.” News of his arrest did not come until Monday evening.

Monday's remembrance ceremonies were not a “happier circumstance” for the loved ones of Lavel, D’Sean, and Devin or the student body. Almost no one can turn off the emotions wrought by mass murder in a matter of days.

These are lives we are talking about. UVa students had died. They were classmates and teammates. They were people’s friends, sons, brothers, cousins. They sat next to some of us in class or in the dining hall. They participated in sports and clubs. They painted with watercolors. They are not just a headline or “three football players.”

Some of the reactions to the mass shooting offered examples of the desensitization of our current climate to gun violence. That students were murdered on a parked bus after seeing a play and that other students felt they had to prioritize their school work instead of their safety points to an unavoidable truth: Something is wrong. A disease infects our country. It stigmatizes vulnerability, casts judgment on taking time off in the face of danger. Quickly putting the horror behind us does not allow us to examine root causes of our national bloodbath and enact reforms.

I do not want to cloud or discount the empathy and palpable love circulating through the UVa community right now and always. The solidarity I have felt among students, team members, club leaders, and professors since the shooting has been unlike anything I have ever experienced. Many emails I have received have brought tears to my eyes. These are the professors and leaders who feel to me like the Dumbledore and McGonagall figures, the powerful good wizards reminding us that there is more good in the world than evil, that love wins.

I am grateful to those professors, like Jack Hamilton, who have reached out to express their support for us, to grieve with us. I am grateful for those professors who welcomed us back to the classroom on Nov. 16 despite anxieties about their safety, and who used the class period as an opportunity to gather and process, not to immediately resume last week’s lecture as if we are unchanged.

The only way out of this is through. But we have to feel in order to heal. Not letting fear win does not mean returning to normalcy or behaving as if nothing has happened—much less deflecting fear onto projects, exams or the disruption of a syllabus. It means facing our problems, reflecting together, having honest conversations and making mental health a priority.

Last Monday evening, members of our community held candles in a vigil on the Lawn, illuminating the darkness like those members of Hogwarts do when they raise their wands to light up the sky. What spell can we cast to save our schools from threat, to soften the hearts of those reading headlines from afar, to honor the victims and support their loved ones and witnesses? What magic must we enact now to heal our community? Perhaps this should be the assignment we prioritize.

Katherine Schwartz is an Echols Scholar in the University of Virginia Class of 2023.

Opinion/Editorial: Put up or shut up linking debt limit to spending cuts

Opinion/Editorial: 2nd Amendment is not a license for murder

Members of the UVa community gather on The Lawn for a Nov. 14 vigil to honor those slain and wounded in a mass shooting on the campus Nov. 13.

Virginia quarterback Brennan Armstrong attends the memorial service for his teammates. Over a thousand students and locals attended the Nov. 19 service at John Paul Jones Arena.

A crowd waits to enter a memorial service in Charlottesville, Va., Saturday, Nov. 19, 2022.