May 31, 1932 - Tuesday, May 12, 2020 Richard Gilder, an investor and benefactor who was instrumental in revitalizing two neglected exemplars of American democracy the study of American history and Central Park died on Tuesday at his home in Charlottesville, Va. He was 87. His wife, the actress Lois Chiles, said the cause was congestive heart failure. Starting in 1994, Gilder served several terms as a Trustee at Monticello and made major contributions there intellectually and philanthropically. "Dick was always game for a big idea," said Dan Jordan, Executive Director at the time. Among many special contributions were the gift of Houdon's master model bust of Jefferson, generous support for the publication by Princeton of the papers of Thomas Jefferson's retirement years, underwriting the curator's position, and numerous gifts to advance educational and scholarly programs. As Gilder said famously, "The only reason to be on a board is to do something big." His service at Monticello led to an interest in having a home here, an interest strongly supported by his wife Lois. Mr. Gilder resided in New York City his entire life. He deeply loved the City and supported many of it's oldest most recognizable institutions. He formed a partnership in 1974 with George Soros to rehabilitate Central Park, laying the foundation for what became the Central Park Conservancy in 1980. The conservancy, a public-private partnership, restored Central Park, transforming it from a dust bowl that had been doomed by deferred maintenance during the city's fiscal crisis of the 1970s to the 840-acre people's oasis that was envisioned when it opened in the 19th century. Gordon J. Davis, New York City's park commissioner at the time, reflected on Mr Gilder's contributions to Central Park. "No Dick Gilder, no reborn and restored Central Park." He began his history restoration project in the late 1980s, teaming up with Lewis E. Lehrman, who had left academia to run Rite-Aid, his family's drugstore chain. They amassed a collection that would eventually consist of 70,000 original documents, letters, pamphlets, diaries and other primary sources that illumuminate American history. They incorporated the collection into the Gilder Lehrman Institute of American History, which they established in 1994 to promote research, teacher training, exhibitions and classroom curriculums and endow prizes to encourage research in the names of Lincoln, Washington and Frederick Douglass. Today the Gilder Lehrman collection is used in over 20,000 schools across the United States in the furtherance of teaching American history to millions of high school students. Mr. Gilder also restored the New-York Historical Society as chairman of its executive committee, rescuing it from a precarious financial state and returning it to solvency; renovating its headquarters, on Central Park West; recruiting Louise Mirrer from the City University of New York to be the society's president; and clarifying its mission to explore the nation's history from a New York perspective. After joining the society's board in 2003, Mr. Gilder was instrumental in transforming Alexander Hamilton from a relatively obscure profile on a $10 bill into a marquee name more than a decade before the musical version of his life arrived on Broadway. The society did so in an exhibition that celebrated Hamilton's West Indian immigrant roots and that reclaimed New York's role as the nation's first capital in a historical narrative that had been hijacked by Boston, Philadelphia and Virginia. "Hamilton" was followed by the blockbuster exhibition "Slavery in New York" in 2005. Mr. Gilder's philanthropy extended to the American Museum of Natural History. As a board member he encouraged and contributed to the renovation of the outdated planatrium, establishing the Rose Space Center. In 2005, along with President, Dr. Ellen Futter, and Board President, Lewis Bernard, he established the Gilder Graduate School, making the museum the first in the Western Hemisphere to be able to grant doctoral degrees in Science. In 2012, his lead gift resulted in the building of the Richard Gilder Center for Science, Education and Innovation, which is now under construction. Dr. Futter called Mr. Gilder "a provocateur who encouraged us to think big, aim high and optimize what things could be." Richard Gilder Jr., a fifth-generation New Yorker known for his tweedy professorial appearance and handsome good looks, was born on May 31, 1932, in Manhattan, the great-great-grandson of a Jewish immigrant from Bohemia. Richard Sr. was a property manager for a real estate company. Mr. Gilder's mother, Jane (Moyse) Gilder, was a homemaker. In addition to Ms. Chiles, whom he married in 2005, he is survived by four children from his first marriage, Ginny (an Olympian rower), Peggy, Britt-Louise and Richard Gilder III; a sister, Peggy Tirschwell; and 10 grandchildren. Teague Funeral Service 2260 Ivy Road, Charlottesville, Va.

+1
+1
To plant a tree in memory of Richard Gilder as a living tribute, please visit Tribute Store. 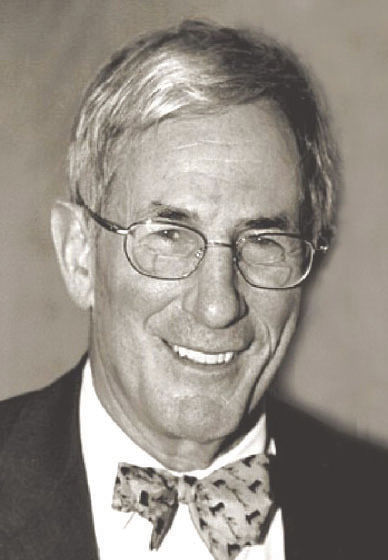