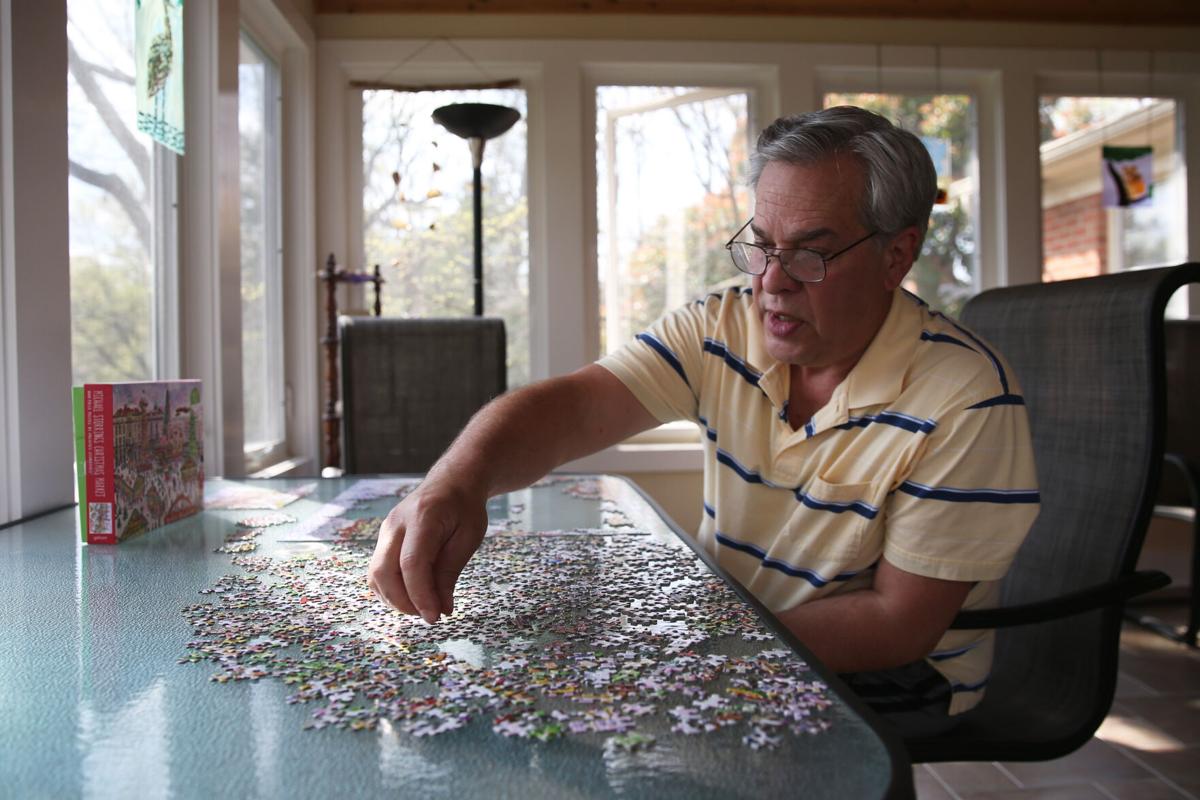 Bob Stroh puts together a puzzle recently on his porch in Greenbrier. Stroh hosts a monthly puzzle swap on the first Sunday of every month. Puzzles are available for all ages. 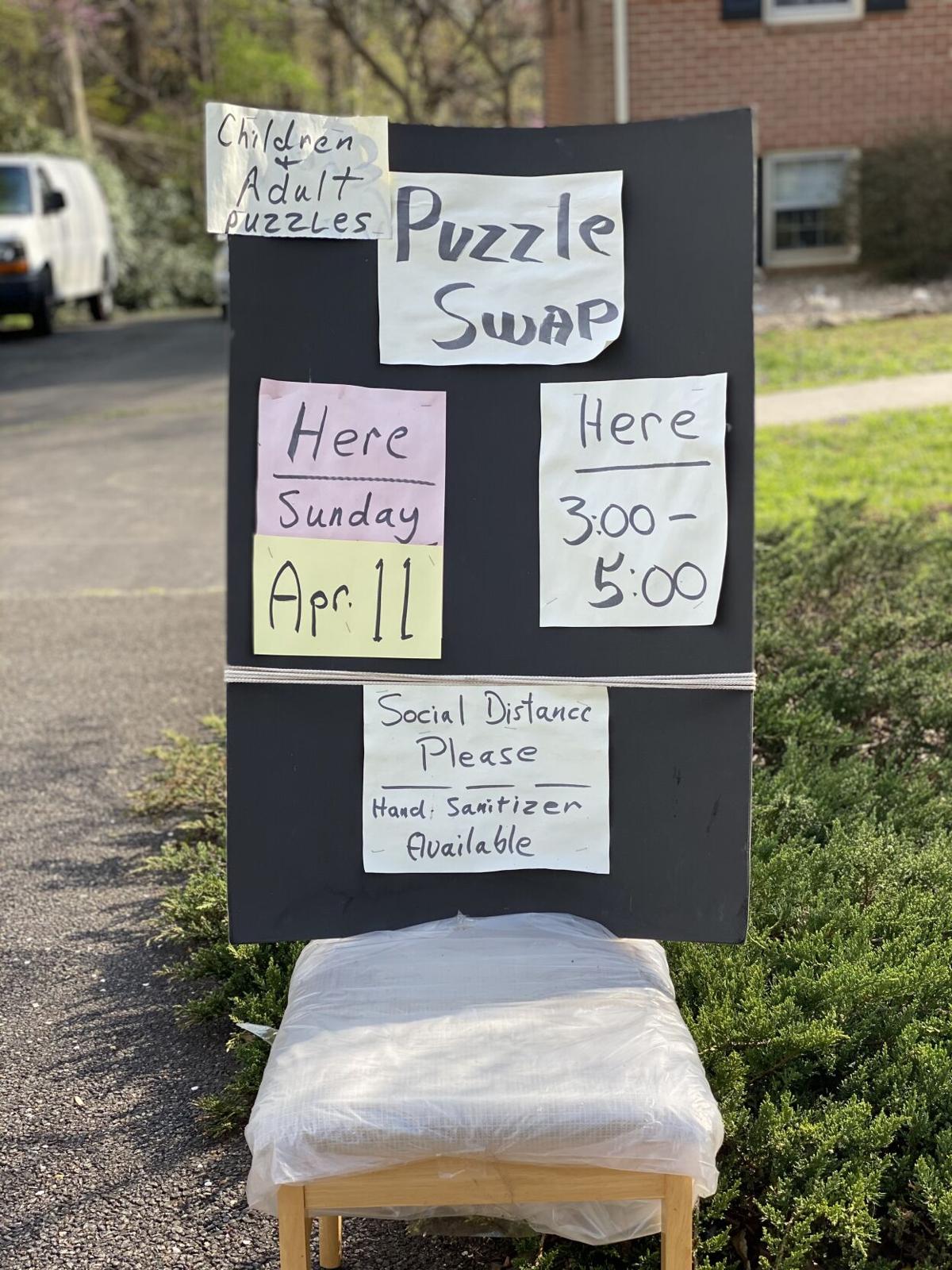 A sign in front of Bob Stroh’s house calls puzzlers to swap challenges.

Puzzles piled on tables in front of the Stroh home provide swap fodder for local residents.

If you’ve puzzled over puzzles until they’re a no longer a challenge no more, Bob Stroh has set up a puzzle-for-puzzle swap to keep the entertainment fresh.

For the past year, Stroh has hosted a jigsaw puzzle swap meet at his Greenbrier home, an event that has grown from a few neighbors to dozens of area residents who exchange solved puzzles for new challenges.

“The puzzle swap is sort of the result of COVID,” Stroh said. “My wife, Helen, and I have always done jigsaw puzzles with our family, but it was not really an ongoing thing. When COVID first hit, we started to get into it and really had a good time with it.”

The Strohs had gotten into puzzling prior to the pandemic.

“It was something we could do together and we started to build up a stock of puzzles. Before the lockdown, we borrowed puzzles, lent puzzles and bought puzzles,” he said. “Before you knew it we had dozens and dozens of puzzles on the shelf.”

“We weren’t sharing puzzles because we weren’t visiting friends and we had all these puzzles hanging around,” he said. “I don’t really like doing a puzzle twice and we had dozens and dozens of puzzles we’d already finished and the question became how do we get new ones?”

The answer was to create a swap meet and put it out on the neighborhood email list.

“The first one had a surprising reaction,” Stroh recalled. “We probably had a couple of dozen people and that was a lot more than I expected. I was surprised. We swapped about 40 or 50 puzzles. I didn’t keep track back then, but it was a great response.”

So great was the response that it became a first-Sunday-of-the-month event in the community. Due to Easter being the first Sunday this month, the swap was changed to this Sunday from 3 p.m. to 5 p.m. at 1412 Kenwood Lane.

“We thought it was great. We love this and wished that everyone could do this, so we kept it going,” he said. “It just got bigger and bigger. People bring in an armful of puzzles and take just enough to do for a month and then come back and trade.”

For many, puzzles are not a frustrating search through misshapen chunks to piece together a cut-up version of the Mona Lisa or some such image. Instead, they’re a satisfying challenge, calming mental gymnastics that help hone what researchers call visuospatial cognitive abilities.

Those abilities include identifying, recognizing and analyzing space, visual cues, details and how they all fit together in three dimensions. According to researchers, visuospatial skills are used in movement and in depth and distance perception.

Puzzles in general, and jigsaw puzzles in particular, are often touted as ways to improve memory and brain function. They’re often hyped as a way to prolong cognitive abilities in persons with Alzheimer’s and other disorders.

Long-term puzzling does just that, according to a 2018 study conducted by researchers at Ulm University in Germany. The study showed that an hour of puzzling every day over years can maintain or improve those skills.

The research recommends putting together more than 3,600 puzzle pieces each month. That can be in several puzzles or one puzzle. Less time spent puzzling won’t hurt cognitive abilities, but doesn’t boost them in a “clinically relevant way compared to engaging in other potentially beneficial activities,” the study found.

“[The] findings are especially important as solving jigsaw puzzles is a frequently performed and easily applicable leisure activity. It can be executed alone or in groups at almost all places without the need of technical devices, language capabilities, or prior knowledge,” the researchers said.

“Given that solving jigsaw puzzles has no known harms, we think that long-term, but not short-term jigsaw puzzling can be considered for recommendations regarding healthy cognitive aging as one component within an intrinsically motivated, physically, socially and cognitively active lifestyle,” they wrote.

The event has grown beyond the Greenbrier neighborhood in the last few meetings after Stroh posted the exchange on social media.

“People have been coming from different places in the city,” he said. “We don’t have any sort of rule like if you bring three puzzles you can take three. If you don’t have a puzzle to swap, borrow a puzzle and bring it back when you’re done and get another one.”

Stroh said he’s glad the event has proven popular and that the puzzles are making the rounds.

“We’re happy they’re getting used. It’s a fun thing to do with family, it’s not competitive and usually, no blood is drawn,” he joked. “People seem to appreciate the swap and the fact that no money has to change hands. They can just look through tables full of puzzles to find one they really like.”

Biden: 'Prepared to negotiate,' on infrastructure

Biden: 'Prepared to negotiate,' on infrastructure

Biden calls for peace and calm after MN shooting

Biden calls for peace and calm after MN shooting

Bob Stroh puts together a puzzle recently on his porch in Greenbrier. Stroh hosts a monthly puzzle swap on the first Sunday of every month. Puzzles are available for all ages.

A sign in front of Bob Stroh’s house calls puzzlers to swap challenges.

Puzzles piled on tables in front of the Stroh home provide swap fodder for local residents.