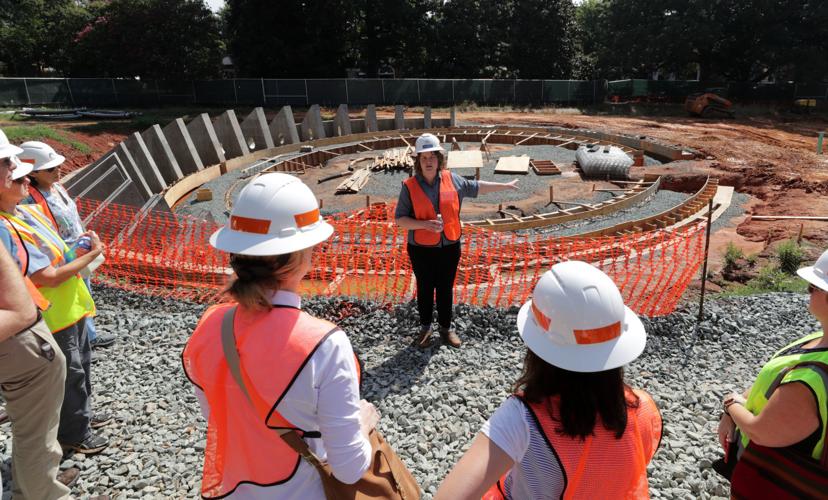 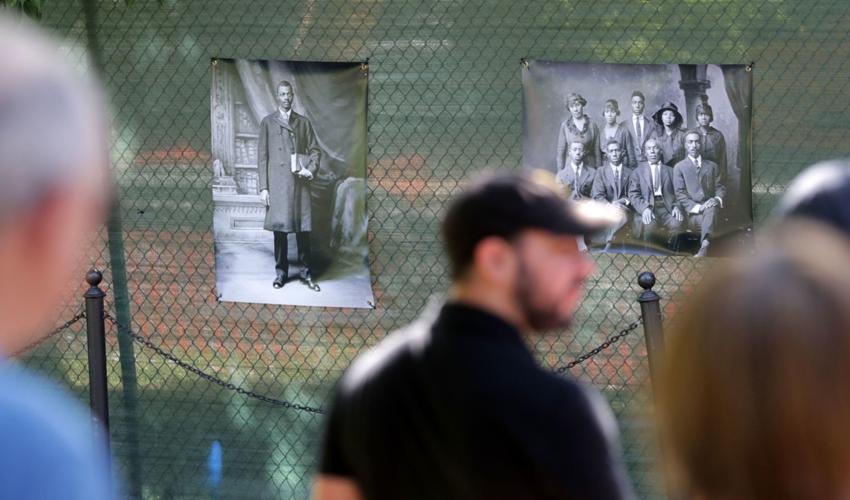 Portraits by Rufus Holsinger are displayed outside of the construction site of the University of Virginia’s Memorial for Enslaved Laborers. 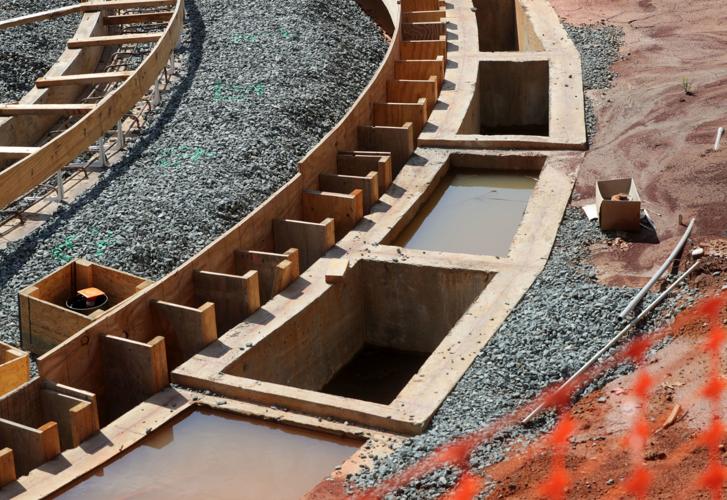 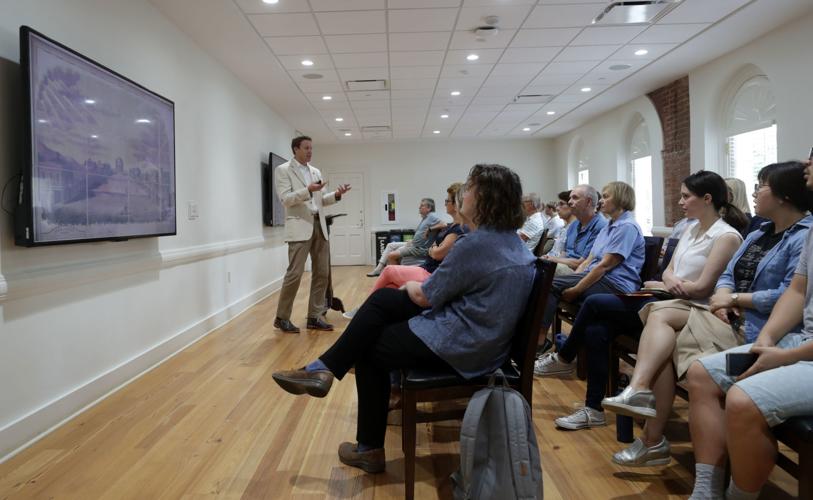 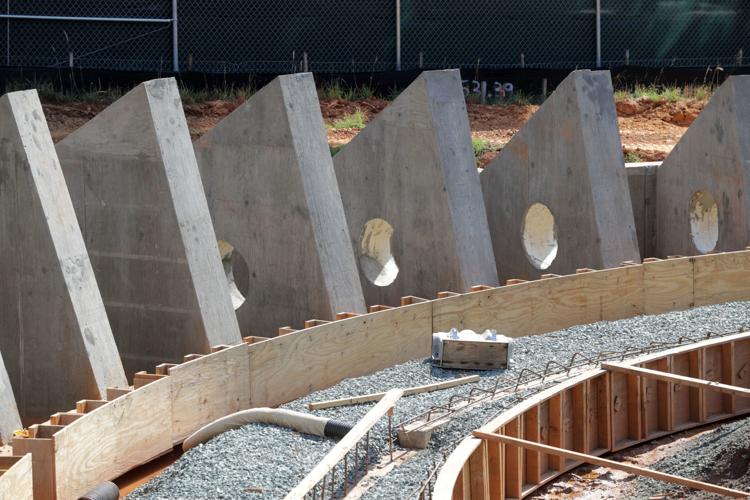 Charlottesville’s list of memorials is popularly dominated by two statues of Confederate generals, but in the next five years, local officials hope three new monuments will reshape the landscape.

Words etched in granite, on display during a tour Tuesday, will form the focal point of the University of Virginia’s Memorial for Enslaved Laborers. Of an estimated 4,000 enslaved people who lived and worked at the university from 1817 to 1865, researchers have uncovered 577 names and dozens more identifiers, such as “Sister,” “Ben” and “Elizabeth Ailstock.”

UVa’s $6 million effort culminates a decade of student calls for a memorial and is joined by a new marker in Albemarle County to honor John Henry James, who was lynched in 1898, and a Vinegar Hill memorial, currently in the fundraising stage, that will commemorate an African American neighborhood leveled in 1965. The three memorial sites are little more than a mile apart from each other, and proponents, spurred by the 2017 white supremacist Unite the Right rally, hope they will help tell a new history of Charlottesville — one that better reflects the decades of slavery, violence and segregation that built Central Virginia, and one that encourages current residents to continue working for equity and justice.

“The [UVa] monument is only the tip of the iceberg,” said Frank Dukes, a professor of architecture who has worked on the city’s Blue Ribbon Commission on Race, Memorials and Public Spaces and is an organizer of UCARE, which began pushing, along with UVa students, for a memorial in 2007. “It’s just part of the overall truth-telling effort; changing the landscape is part of the effort of repair.”

A recent forum at the Jefferson School of African American History included discussions of all three memorials.

“In order to encourage the full range of these histories, there has to be an iconography, a language that says these monuments are about large conversations,” said Jefferson School executive director Andrea Douglas, who served on the Blue Ribbon Commission and was co-chair of UVa’s slavery commission. “These monuments are not for veneration; they demand engagement and a fluid, dynamic response.”

UVa’s memorial will sit on a triangle of grass just east of the university and across the street from the Corner, on the route of the annual Liberation and Freedom Day march.

Some details of the memorial have been shared in mockups and posters, but the scale is evident at the build site, where concrete buttresses await thousands of pounds of “Virginia Mist” granite. Each piece of the monument has been carefully considered and many hearken back to the original architecture of the university.

The outer wall will rise to the same height as the original serpentine walls, which shielded the quarters of professors’ slaves from view. A water feature references West African beliefs about libation and the trauma of slaves’ journey through the Middle Passage. The circular shape echoes the “Ring Shout,” a dance practiced by enslaved African Americans, as well as a broken shackle. The diameter of the circle, 80 feet, is the same diameter as the Rotunda.

Along the outside edge of the wall, gouges into the granite will depict Isabella Gibbons’ eyes. Gibbons was enslaved by a physics professor and, after emancipation, became a schoolteacher.

“The gravity of her story is amplified,” said Louis Nelson, a professor of architectural history and vice president of academic outreach, during a tour of the site on Tuesday. “She is looking right out at us, asking, ‘will you remember?’”

The monument is undergirded by years of research to excavate the names, spaces and histories of enslaved people around UVa. Careful readings of letters, memoranda and documents have uncovered names such as Zachariah, who dug the foundation of a student building, and Sam the Carpenter, who likely oversaw his own son at a work site. Some slaves were owned by professors, but many were hired out from nearby plantations. Skilled enslaved workers might have moved on to build sites in Lexington and Staunton. Families might have stayed in the area after emancipation and begun a vibrant freedman’s community.

As various information is uncovered, Nelson said, researchers have formed a new way of looking at and understanding Thomas Jefferson’s university: one that looks not just at the Lawn and the Rotunda, but at the basements beneath the Pavilions where enslaved people lived and the acres surrounding the professors’ Pavilions that contained vineyards, pastures and gardens tended by slaves.

“In some ways, the University of Virginia functioned as an antebellum plantation — that’s just not the way we have chosen to see it,” Nelson said. “But there were actually people, men and women associated with building the university, whose stories are never told.”

And as the research continues, officials said, they hope to add more names to the wall.

“A physical monument like that will help us engage the past as we shape the future. It’s a living monument,” said Dr. Marcus Martin, who recently retired from his longtime role as UVa’s chief diversity officer. “Coming together and working through a common project is a form of healing, and I like what’s happening in our community around monuments.”

Work will also continue with other universities, Martin said. UVa’s slavery commission started an international consortium of universities studying their own involvement with slavery.

Not many universities are considering physical monuments, but the College of William & Mary has followed a similar timeline of student calls for research into the school’s history and the decision to build a memorial. In April, its board approved a design that will feature the 60 known names of enslaved workers.

“The memorial is not the end of the road; it’s the middle,” said Jody Allen, director of the school’s Lemon Project. “When you think of campus landscapes in Virginia, you think of James Monroe and Thomas Jefferson and James Blair, but these people did not build and maintain the schools themselves; there were many more people involved. Today, in 2019, you have a diverse group of people walking around these campuses and they need to understand where their ancestors fit into the campus landscape.”

UVa’s memorial has an expected completion date of April 2020. After that, though, much more work remains — of cataloging slavery’s impact, researching segregation’s ongoing effects and holding the university accountable to remember history and work on equity.

“Until we start telling hard truths that undermine systems of white supremacy and these mythologized narratives, we haven’t really supported democracy,” Nelson said. “If we’re not telling the truth about who we are as a community, we’re not doing justice or democracy any favors.”

Instead of Jefferson, Charlottesville now officially celebrates enslaved population 'getting their due'

This year’s Procession of Freedom was the first to be celebrated as an official local holiday following a Charlottesville City Council vote last year to designate March 3 as Freedom and Liberation Day and a paid day off for staff in lieu of Thomas Jefferson’s April 13 birthday.

Tour of Memorial to Enslaved Workers at UVA

"... it's important to know your ancestors and be able to tell their stories, especially now."

Most curse words have a common feature no matter what language

Most curse words have a common feature no matter what language

Portraits by Rufus Holsinger are displayed outside of the construction site of the University of Virginia’s Memorial for Enslaved Laborers.