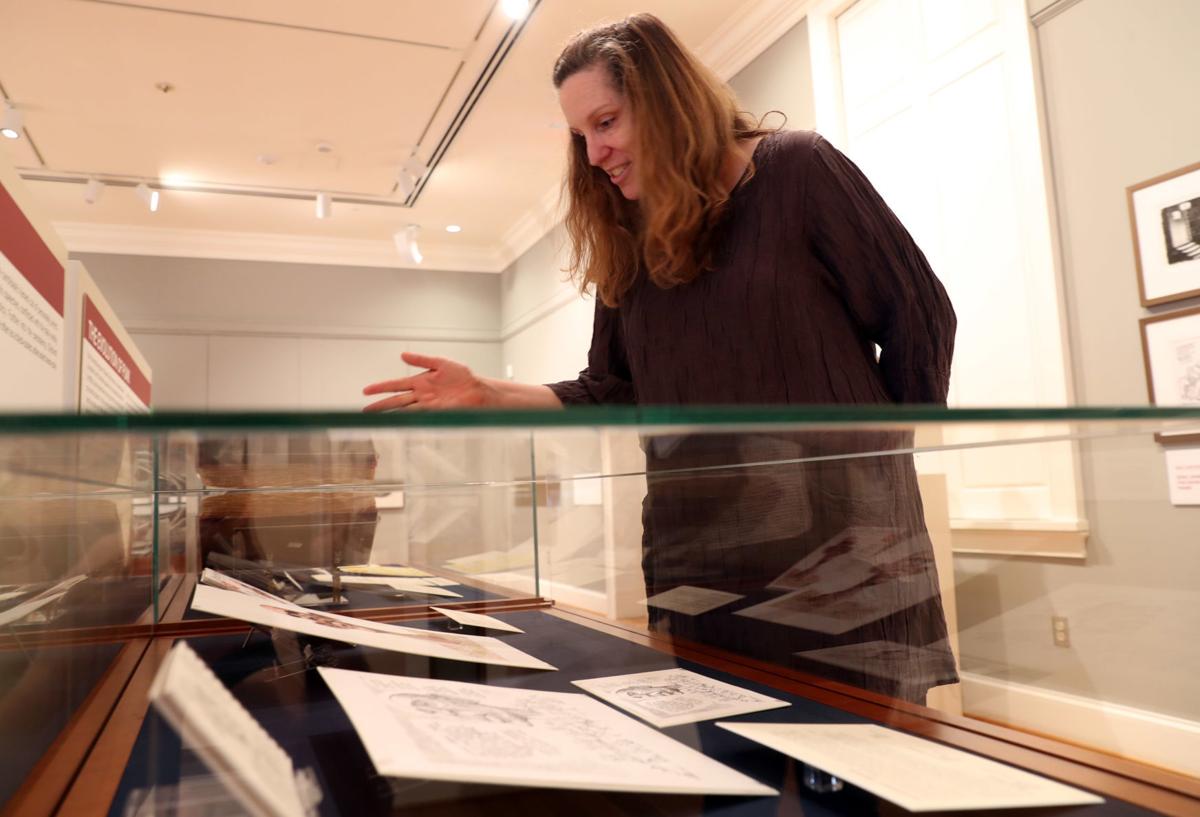 Curator Molly Schwartzburg looks over drawings in the exhibit chronicling the work of political cartoonist Patrick Oliphant at the Albert and Shirley Small Special Collections Library at the University of Virginia. The exhibit opens Monday. 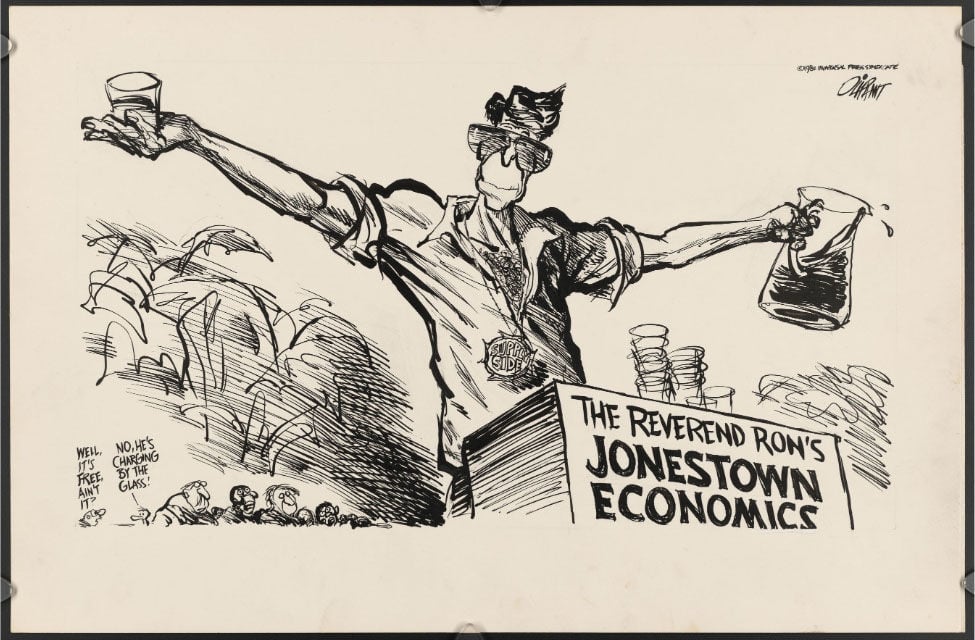 This 1982 cartoon by Patrick Oliphant likens President Ronald Reagan’s economic policies to the drinking of the Kool-Aid, so to speak, at the Jonestown massacre.

For decades, Patrick Oliphant’s political cartoons filled the editorial pages of newspapers across the United States.

Now, for the first time, an extensive collection of those cartoons, as well as process sketches, sculptures and paintings, grace the walls of the University of Virginia’s Albert and Shirley Small Special Collections Library. The university acquired the artist’s collection, which spans American presidencies from Lyndon Johnson to Barack Obama, in April 2018; the exhibit will open Monday and run through May.

“It’s a big responsibility, to work with a living artist,” said Beth Turner, a professor of art at UVa who worked on the exhibit. “But what better place to put a collection than at a university, where it can be a point of reference for research and teaching?”

Oliphant began his career in Adelaide, Australia, where he was born. He worked as a copyboy and then began doing graphics and cartoon work. In 1964 he moved to the United States and worked for The Denver Post, then for the Washington Star, and then independently as his work was syndicated internationally. He won the Pulitzer Prize in 1967 for a cartoon depicting Ho Chi Minh carrying a dead Vietnamese man with the words, “They won’t get us to the conference table, will they?”

“His political cartoons themselves often achieve the excellence and brilliance of fine art,” said Molly Schwartzburg, a curator for the library who also worked on the project. “These small pieces in the newspaper that you threw away after reading are incredible works.”

The exhibit aims to display Oliphant’s artistic skill — his composition and use of line broke new ground among cartoon drawing — as well as his influence on political commentary.

Among the sculptures are President Richard Nixon as a sullen Napolean Bonaparte in retreat and President Bill Clinton as gunslinger Billy the Kid.

“In Patrick’s mind’s eye, there are no divisions between art and news,” Turner said. “He’s leaning on the circulation of newspapers to get his ideas out there, and he’s leaning on popular culture to translate his work into a medium that is powerful.”

The curators asked six UVa faculty members to choose their favorite sets of cartoons around a political period or theme, and those works are clustered on the walls of the special collections library. In the spring, a new group of faculty members will choose a different set of images. The exhibit also includes letters and critiques from readers in an attempt to place Oliphant and his work in context.

Oliphant, who now lives in Santa Fe, New Mexico, retired in 2015, though he published two images of President Donald Trump in 2017. As the media landscape changes and more editorial cartoonists retire, Turner said she expects the format to shift. But a desire to understand current events through humor and through a visual format remains, she said.

“He took the long view of the visual format and of satire and commentary,” she said. “The need for a depth of storytelling and narrative will remain.”

The Miller Center of Public Affairs will host a free panel discussion on Oliphant’s work from 2 to 5 p.m. Tuesday at Newcomb Hall Theater.

Curator Molly Schwartzburg looks over drawings in the exhibit chronicling the work of political cartoonist Patrick Oliphant at the Albert and Shirley Small Special Collections Library at the University of Virginia. The exhibit opens Monday.

This 1982 cartoon by Patrick Oliphant likens President Ronald Reagan’s economic policies to the drinking of the Kool-Aid, so to speak, at the Jonestown massacre.