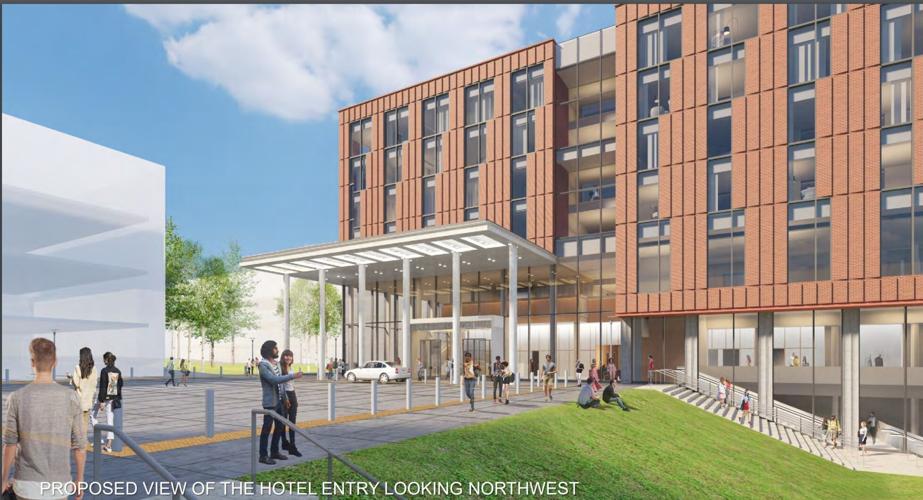 A March 2021 rendering of the new hotel and conference center at the University of Virginia, which will be located the intersection of Ivy Road and Emmet Street. Construction costs for the facility are 30% higher than expected.

The University of Virginia's 2022 Major Capital Plan totals $2.8 billion. About 31% of the plan is tied up in projects under construction, many of which are expected to be completed within the next two years.

The next two years will be busy for the University of Virginia as a suite of construction projects wrap up.

That includes renovations to the chemistry building and Alderman Library as well as construction of new Inn at Darden, the School of Data Science and a new residence hall on Brandon Avenue, according to an update to the Board of Visitors on Thursday.

“We’re going to be doing a lot of ribbons cuttings,” said Colette Sheehy, senior vice president for operations at UVa.

The Board of Visitors’ building and grounds committee met Thursday to review and approve UVa’s 2022 Major Capital Plan. The full board will meet Friday afternoon.

Projects under construction total $882.9 million, which is about 31% of the proposed $2.8 billion plan, according to the presentation. About $838 million worth of the projects are in the planning and design phrase. The rest of the plan includes projects not yet initiated.

UVa has completed $706.1 million in projects since June 2021. Sheehy said that includes the expansion of the UVa Medical Center, a new orthopedic center and a new 156,000-square-foot Student Health and Wellness Center on Brandon Avenue.

For example, construction costs for the $167.9 million UVa Hotel and Conference Center is 30% higher than the preliminary estimate received in June 2021. The final contract bid was received in April. The center will be located at the intersection of Ivy Road and Emmet Street.

In response to the cost increases, Sundgren said the university could adjust its project priorities, include an escalation contingency in project budget or evaluate cheaper design options, among other options.

The full board will discuss the issue further Friday.

The 2022 plan includes eight new projects, the largest of which is a $350 million Institute of Biotechnology. The state will kick in $175 million for the 350,000 square-foot facility that will include the necessary technology and equipment to manufacture both cell and protein-based investigational therapies, as well as viral vectors for researchers and partnering biotechnology companies.

“The proposed new facility will enable the University to catalyze innovative research capable of creating new and innovative clinical therapies and of making Virginia a national leader in research discovery, translation, and clinical care,” UVa officials said in board documents.

UVa’s board first heard about this new institute in March. Construction is expected to start in fall 2023, according to a project summary.

Other new projects include a $54 million, 1000-car parking garage to support employees, visitors and patrons of athletic and other university events. Officials didn’t say Thursday where the garage would be located.

“We have a big need for more parking,” Sheehy said.

UVa has studied parking needs several times in the last several years, most recently in 2021. A team of officials ultimately recommended a garage with at least 1,000 spaces that doesn’t disrupt current operations and can be shared by different constituencies.

Parking demands among employees working on Grounds and event patrons have remained steady during the pandemic and are projected to increase, according to board documents.

Another new project would be the construction of graduate student housing for the Darden School of Business. Darden officials identified this need as part of its master plan process.

The school wants to build a faculty with 440 beds, which would be two-thirds of its graduate student population, Sheehy said.

“It’s something that competitor business schools do,” Sheehy said.

The cost and timing of the project has not yet been determined, but Darden officials expect the project to attract significant donor interest, according to a summary.

Board members were largely supportive of adding student housing to the Darden grounds, though some asked about whether there was any risk to the school and university with the project as Darden has been self-sufficient financially.

“We know the world of MBA and how competitive you need to be and I think housing is a significant barrier,” said JJ Davis, the chief operating officer for UVa.

Davis added that the university has plenty of need for student housing.

“I see very little risk of adding to housing stock just given the overall demand that we’re still experiencing,” she said.

Provost Ian Baucom said housing will be an long-term issue for graduate programs across the university, adding that he’s talked about the Darden project with other deans and that graduates tend to live pretty moderately.

The university is planning to further study the issue.

“Use your white privilege and stand with us, because when it comes down to it and they want to start violence like [the noose], who is going to be right there, putting their body on the line just like mine?”

Panel discussions throughout the day pondered the course of action for political, community, religious and educational leaders related to ideologies in the Jan. 6 Capitol insurrection and Unite the Right rally.

Ellis' history as a student leader included hiring a racist eugenics proponent to speak during Black History Month in 1975 and cancelled a gay rights rally because it was "not an issue viewed highly in the university."

UVa making up for tuition hike with student rebate

Students will see the tuition credit on their student accounts for the fall 2022 and spring 2023 semesters.

The code requires all higher education institutions to maintain a public record of investigations that found organizations guilty of violating the code of conduct or Virginia hazing laws.

UVa moves up to third in national college ranking

UVa ties with the Univ. of Michigan and the Univ. of California - Berkley & Los Angeles on the U.S. News & World Report's Top Public Schools list.

Why the colors of sunsets are so incredible

Why the colors of sunsets are so incredible

A March 2021 rendering of the new hotel and conference center at the University of Virginia, which will be located the intersection of Ivy Road and Emmet Street. Construction costs for the facility are 30% higher than expected.

The University of Virginia's 2022 Major Capital Plan totals $2.8 billion. About 31% of the plan is tied up in projects under construction, many of which are expected to be completed within the next two years.