From Karens to toilet paper hoarders, 2020 lives on in UVa graduates' card game
0 comments
Share this
{{featured_button_text}}
1 of 4 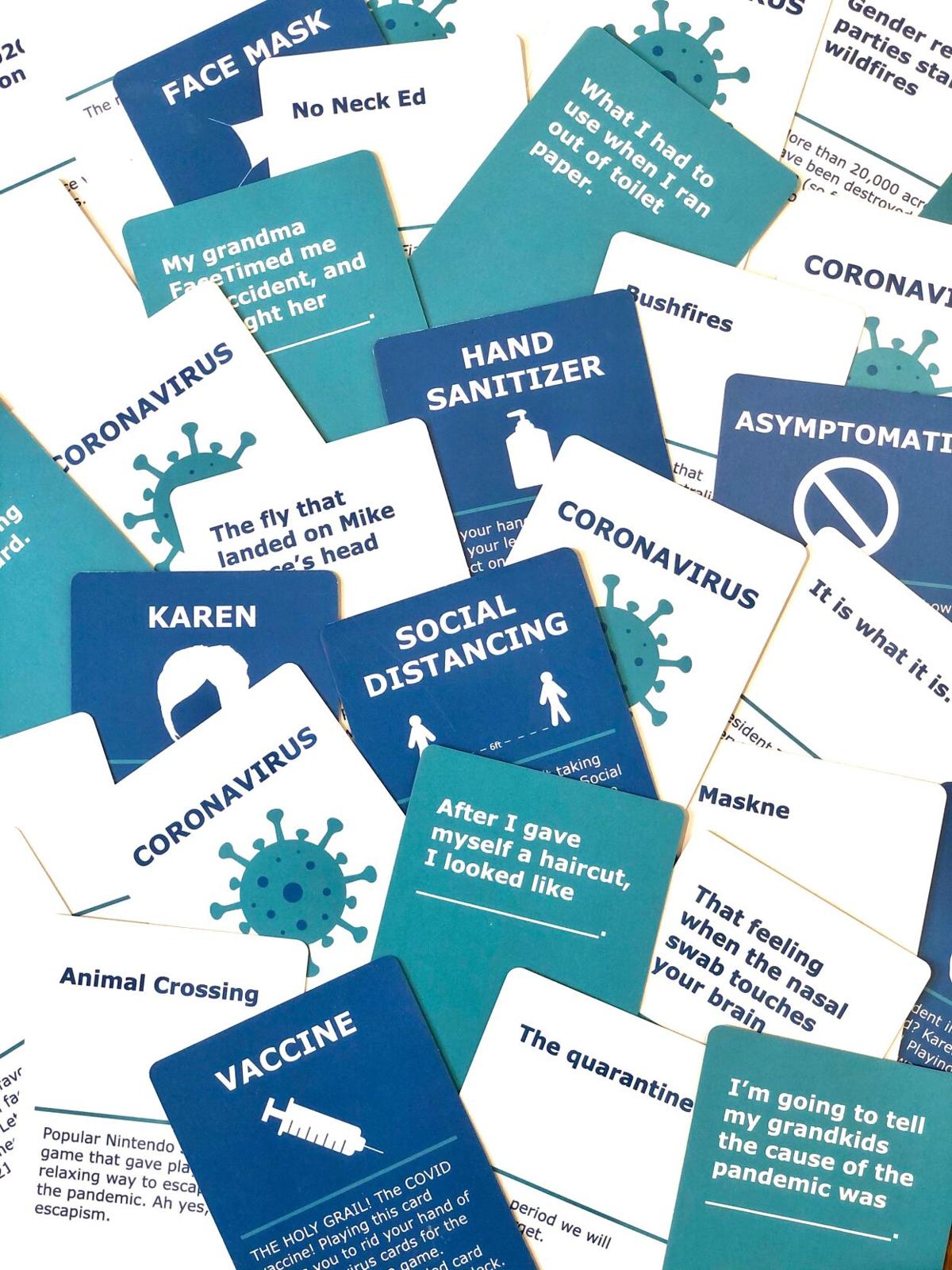 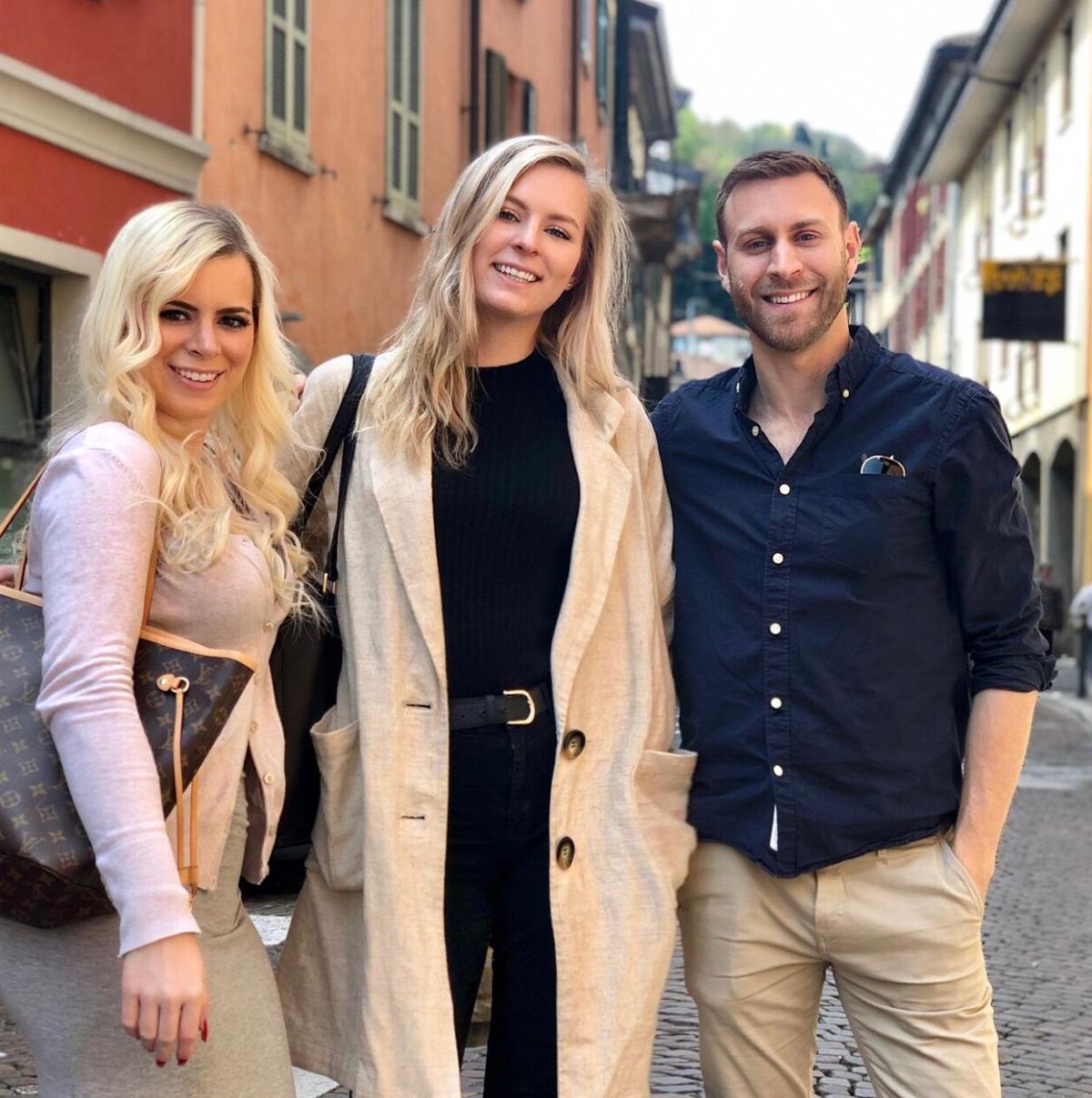 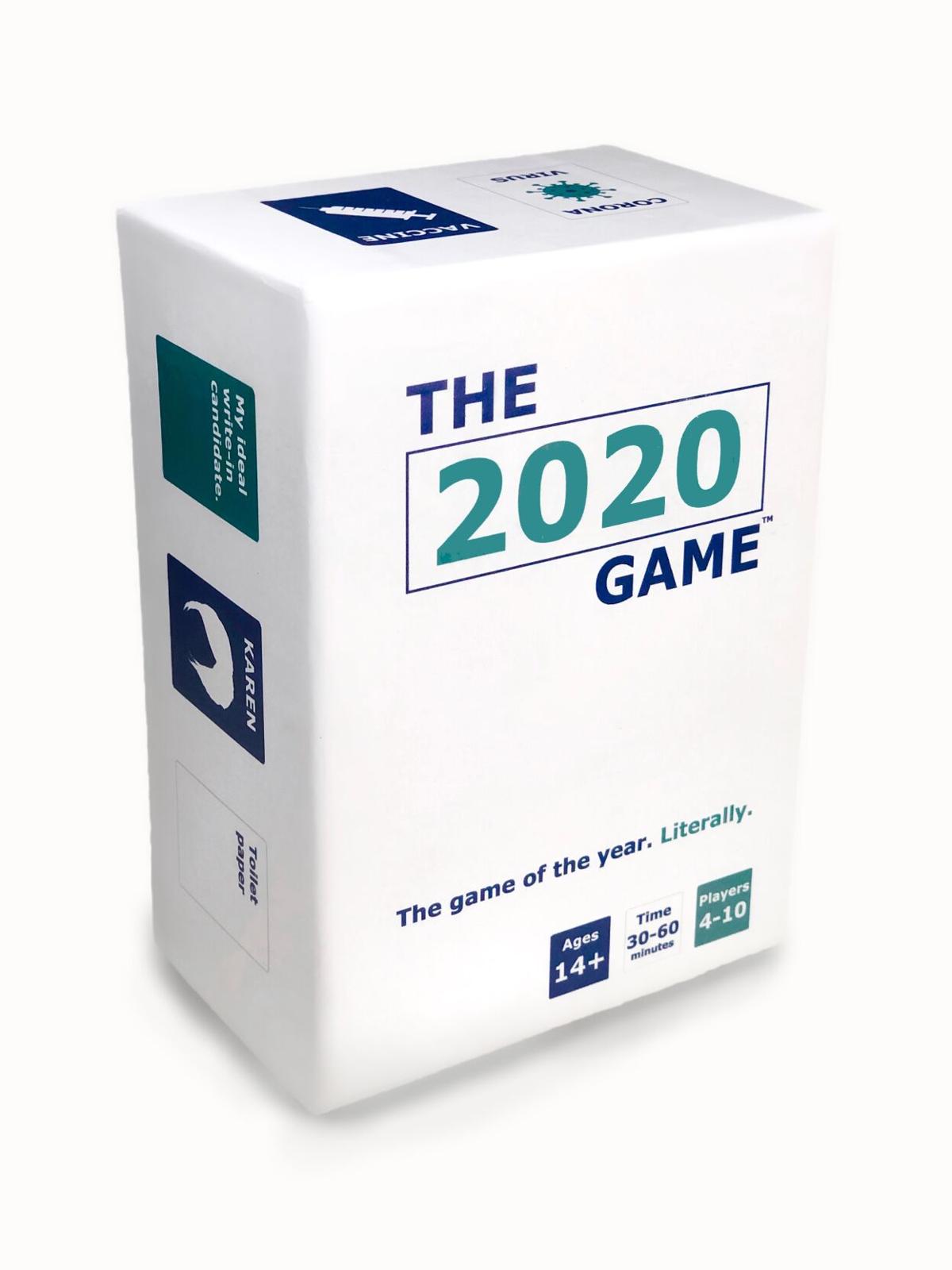 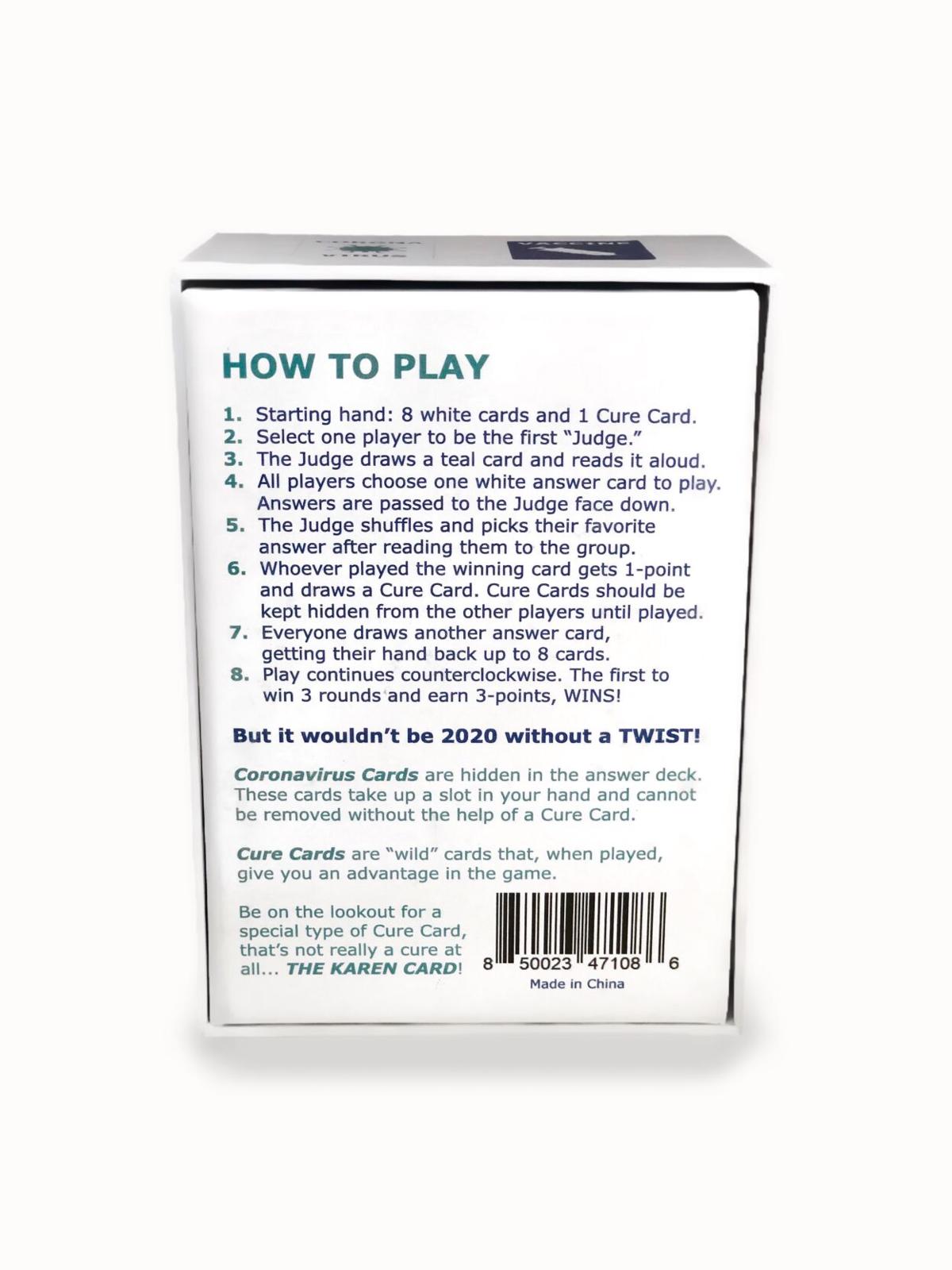 It was a year so weird, so wild, so wacked out that it often felt like a twisted version of chess, with every move the wrong one and every piece out to pawn off the king and queen.

Thanks to Ashburn siblings Lindsey, Melissa and Kevin Hart, two of whom are University of Virginia graduates, the fun of “now what?!,” which defined 2020, can be relived again and again through their card game, The 2020 Game.

“Games have been a major part of our family ever since we were young,” Lindsey said. “We were always coming up with our own games or our own twist to existing games. We once created our own version of Clue where the murderer was Oprah on the trampoline with a muffin pan.”

Similar at its heart to Cards Against Humanity, the game involves cards with fill-in-the-blank questions that are filled in with answer cards. The deck includes enough weirdness and literal game changers to make it the perfect way to remember what you wish you’d forget.

“The rules are pretty simple,” said Kevin. “Players will take turns drawing a question card that the other players have to answer. The player who drew the question card will be the judge, and the other players will choose their best, funniest, most-2020 answer card to play from their hand. The judge will select their favorite, and the winner gets one point and draws a Cure Card.”

That sounds like a nice, simple card game but remember, it’s about the year that was.

“Hidden in the deck of answer cards are Coronavirus Cards. These cards take up a slot in your hand and can’t be removed without the help of a Cure Card,” Lindsey said. “The Cure Cards are where things start to get crazy, in a good way. These are wild cards that can be played to mix up the game or give yourself an advantage.”

“We wanted to keep the structure of the game flexible to allow players room to create their own house rules,” said Melissa. “You can start with two or three Cure Cards instead, if you really want to get crazy and increase the amount of Karen Cards in circulation. She’s our favorite Cure Card.”

“That’s funny you bring up the Karen Card,” said Lindsey. “It seems to be everyone’s favorite, and ours too.”

“Karen” is internet slang that recently made the dictionary.

It means “an obnoxious, angry, entitled and often racist middle-aged white woman who uses her privilege to get her way or police other people’s behaviors,” according to Dictionary.com, Wikipedia and Urban Dictionary.com.

Karen, of course, has a male counterpart. His name is Ken. Like real life, however, in The 2020 Game, it’s all about Karen.

“[The Karen Card] is played in a similar way to how the Karens behave. It can be used after all answers have been submitted but before the judge reads them,” Lindsey explained. “Playing a Karen Card will swap out the question card for another at random.”

In life and in games, Karens disrupt play.

“The result is that some of the answer cards played may no longer make sense with the new question, which usually leads to chaos,” Kevin said. “The idea is that when someone plays a Karen Card, it should feel like a Karen just interrupted to cause a scene. It’s easily one of the most entertaining, but frustrating, parts of the game.”

The siblings swear Karen was simply swiped from popular culture, not the result of anyone they met.

“Thankfully, there was no particular personal experience that led to the Karen Card,” Melissa said. “Our goal was to capture that universally relatable experience of encountering one, and the chaos that ensures soon after.”

Like the year that was, The 2020 Game is unpredictable and fraught with insecurity and botheration.

“It was important to us that everything stayed on-theme with 2020. We liked the idea of creating a time capsule of the year. We wanted every card to either represent a specific event or a relatable feeling experienced that year,” Melissa said.

“We knew we wanted to incorporate a lot of buzzwords and events from the year, so that’s where we started,” Kevin said. “We all loved Cards Against Humanity, so we initially built something that looked similar to a 2020 version of that. Once we had that framework, we added several different features to move away from that comparison and make something totally new.”

The “new” played out in the Cure Cards.

“When it came to building the different elements of the game, we looked to the year for inspiration. Everything from COVID to Karen played a part,” Lindsey said. “A portion of the game is about trying to avoid your hand filling up with Coronavirus Cards. In order to do that, you need to collect Cure Cards such as hand sanitizer and face masks.”

“They came later in the development process, when we thought that it could be more fun from a gameplay perspective to participate in the action of, for example, social distancing, rather than having that be the answer to a question card,” Melissa said.

That cure is one of Lindsey’s favorite cards.

“When you play it, you get to choose another player to sit out that round,” she said. “We thought this would be a clever way to bring to life what it was like to live through 2020 into the game.”

“We were intentional about everything; the color scheme even includes the 2020 Pantone Color of the Year,” Melissa said.

Oddly enough, the Pantone color for 2020 was classic blue. According to Pantone, the color instills calm, confidence and connection and “highlights our desire for a dependable and stable foundation on which to build as we cross the threshold into a new era.”

The color was announced in December 2019, which could explain why they overlooked puce.

“Really, it was less about the year being bizarre and more about us coming to the realization that we were living through a historic year,” Kevin said. “We came up with the idea around halfway into the year. So many monumental events had already occurred. I mean we had the pandemic, the Black Lives Matter protests, Tiger King, a toilet paper shortage and don’t forget the murder hornets! We knew this year was one for the books.”

Kevin said the craziness sparked the trio’s creativity and the dormant desire to work together and do what parents everywhere beg of their children — cooperate.

“We had always talked about how fun it would be to work with each other on some sort of project or business venture,” he said. “We’ve come up with idea after idea throughout the years but never actually pursued one. All of us felt so passionate about The 2020 Game that we had to see it through.”

Besides their love of card games, the siblings share business sense. Kevin, a 2014 UVa graduate, works in product management for Netflix. Melissa graduated from the UVa McIntire School of Commerce and works for an international business consulting firm. Lindsey graduated from the University of Miami and works in marketing for a financial crime prevention organization.

“Our business education definitely helped us begin on a strong foundation, but of course we were also learning every day we moved forward,” said Melissa. “We knew our ideal selling window would be before the holidays, so we had to start up our [company] and register our trademark as soon as possible.”

They sought and locate a supplier, finalized the game format and tapped a friend to help navigate the waters of selling on Amazon.

“With my background in marketing, I knew we had to start working on a marketing plan, as well,” Lindsey said. “We started setting up our website and social media accounts and looking at different methods of advertising. It was so exciting to see everything come together in the end.”

The year that inspired their game has apparently inspired sales, as well.

“I think it’s a safe assumption to say that no one originally expected the pandemic to last well into the summer, let alone how far along we are now,” Melissa said. “Everyone’s lives have shifted in one way or another. Even the fact that we had to create the entire game via Zoom and phone calls, that in and of itself is pretty bizarre.”

“There have definitely been a lot of interesting and wild events happening that would have made for great game cards,” Lindsey said of the first month of 2021. “We have been happy to hear from our customers that playing the game provides a bit of lighthearted escapism for them despite how crazy things have been.”

US rejoins the Paris Agreement

The team also made the breakthrough discovery that a form of DNA, called Alu, was replicating in the cytoplasm of cells.