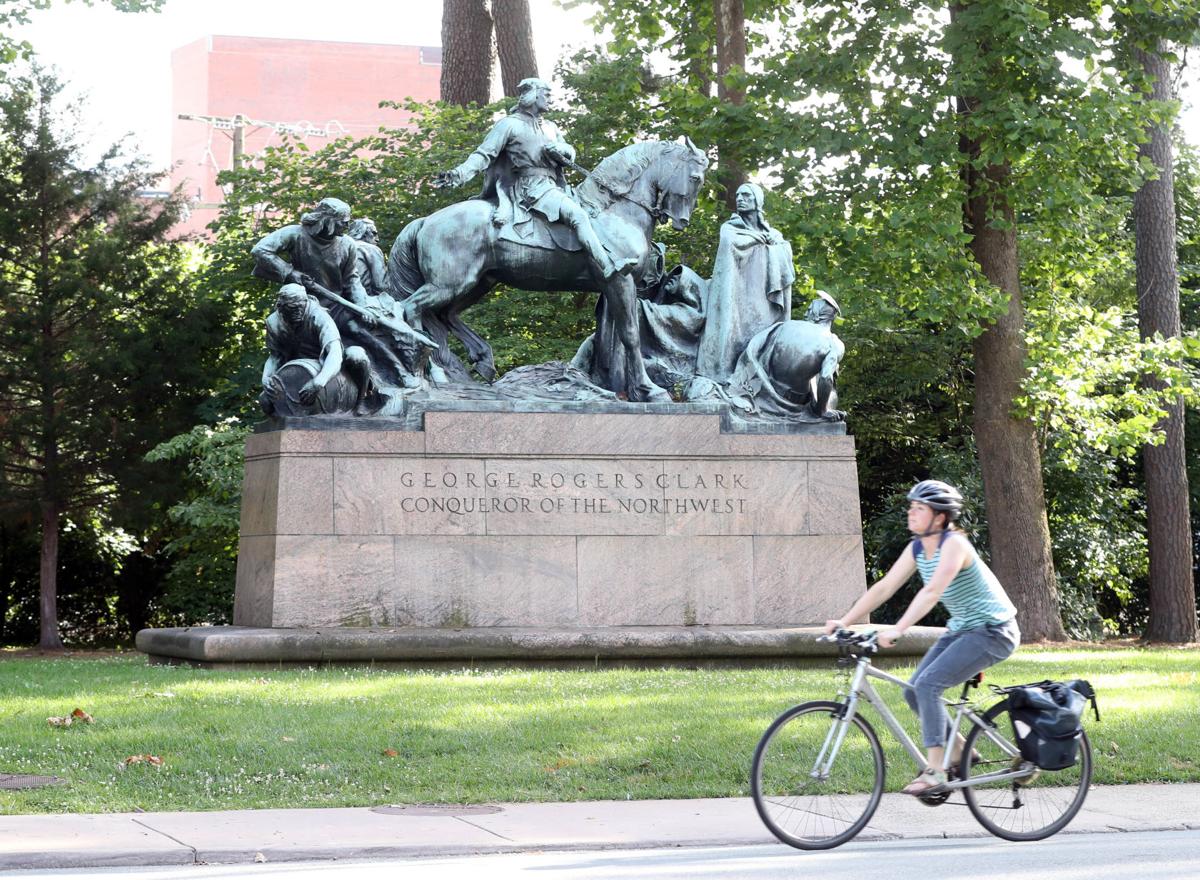 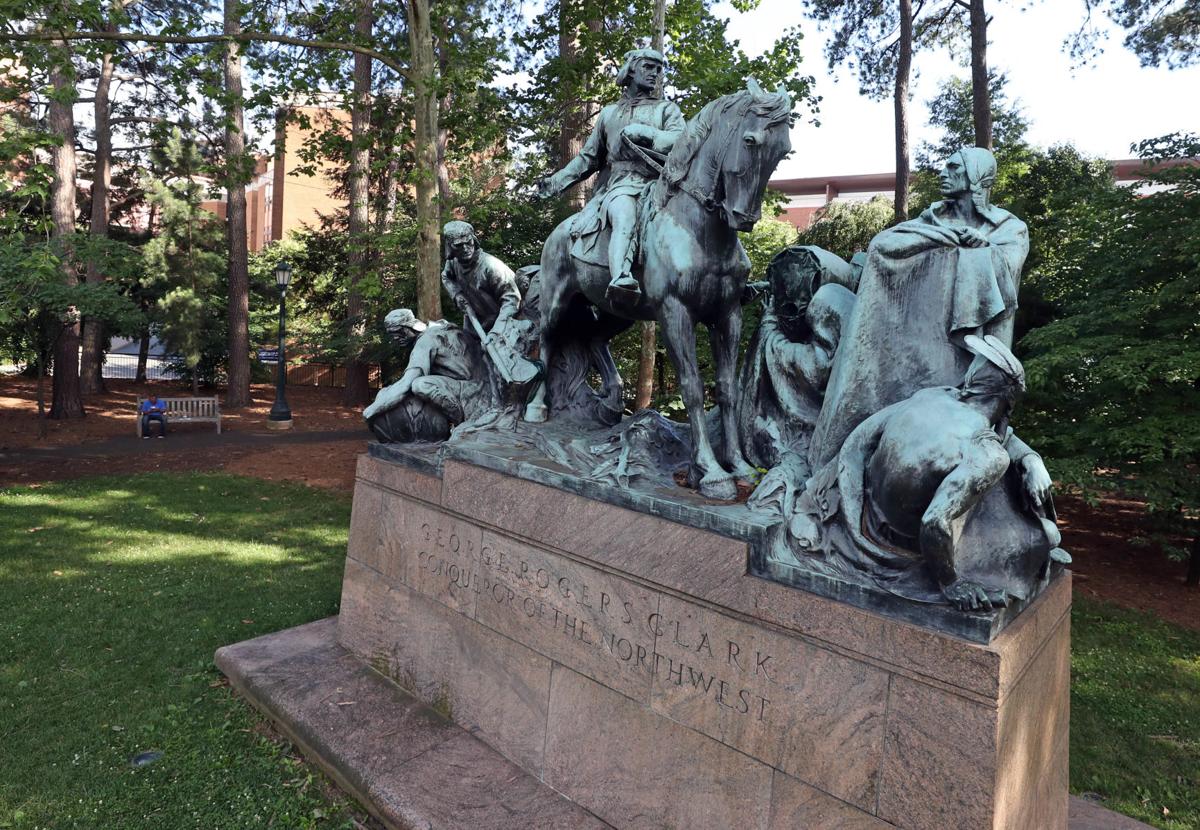 As the University of Virginia examines its history with Native Americans, a petition is circulating asking the school to remove a statue depicting an attack on a native family.

David Swanson is seeking signatures on the petition to remove the memorial to George Rogers Clark and has been in contact with UVa President Jim Ryan about the statue.

Ryan forwarded the petition to the school’s segregation commission, according to a spokesman. The commission is examining UVa’s history of segregation.

“We’ve all been living in Charlottesville year after year and walking by this statue and not noticing or complaining or making an issue of it,” Swanson said. “None of the statues [in the area] are actually inoffensive.”

Clark, who was born in Albemarle County, was a general who fought Native American tribes as the U.S. expanded westward following the Revolutionary War.

The statue calls him the “Conqueror of the Northwest.” It sits at the intersection of West Main Street and Jefferson Park Avenue on UVa property.

The sculpture depicts Clark on a horse as a Native American family cowers in fear and one of Clark’s men circles around the horse wielding a gun.

“It looks like they’re about to be trampled or killed,” said Anthony Guy Lopez, who is an enrolled member of the Crow Creek Sioux tribe in South Dakota and holds a master’s degree in anthropology from UVa.

It is one of two statues in the city donated by Paul Goodloe McIntire in the 1920s that depict native people.

The statue was dedicated to “a lot of celebration,” Lopez said, as businesses closed and the university canceled classes.

“The city turned out in large numbers. They closed shops and stores, gave people time off work so they could be there,” he said. “They were very much celebrating the message that the statue conveys, which is completely violent.”

McIntire also donated a statue that shows Lemhi Shoshone guide Sacagawea kneeling at the feet of explorers Meriwether Lewis and William Clark. The city is considering removing that sculpture.

“The university is even behind the city,” Lopez said. “They’ve done nothing to … mitigate the negative message conveyed by their colonial trophy.”

Kirt von Daacke, co-chair of the segregation commission, said the statue is part of the panel’s focus.

He said the university will publicize different aspects of the commission’s work in the fall, including research on the statue.

“It is tied up in the entire Charlottesville monumental landscape of the early 20th century,” von Daacke said. “It’s about erasure of Native Americans from the story of Virginia and America.”

Lopez said that until recently the statue’s maintenance was the university’s biggest expenditure related to American Indians. In 2016, UVa established a grant-funded program for indigenous art.

Swanson pointed out that UVa is constructing a monument to the slaves who built the university near the statue, creating a stark contrast in messaging.

“If you’re going to take that step to put up memorials that are acceptable in today’s morality, you shouldn’t have one celebrating genocide just down the street,” he said.

Swanson plans to gather a team to push for the statue’s removal and possibly meet with university officials.

Swanson highlighted that the university wouldn’t run into the legal issues that plagued the city when it tried to remove monuments to Confederate leaders. Those statues fall in murky waters because state code prohibits the removal of war memorials from several specified wars.

The George Clark statue shows what has been called the Northwest Indian War, a conflict not listed under the state code section concerning war monuments.

“It would seem — I’m not a lawyer — it would seem at first glance that there’s not that excuse of the state won’t let us,” Swanson said.

The statue, and complacency about it, is part of a larger issue with the contemporary view of westward expansion and the toll it took on Native Americans, Lopez said.

“I think it’s embedded in the deep psyche of Americans that the foundation of violence is somehow acceptable as somehow being responsible for the country itself in its expansion,” he said. “It very much conveys a message that if it comes at the native nations’ expense, that that’s OK.”

“This student asked a series of questions that were quite antagonistic toward the panel. He pressed on and stated one faculty member was being contradictory. ..."

UVa urges students, staff and faculty to get vaccinated for fall semester

Final safety measures for the fall semester, including mask mandates and gathering limits, are expected to be released by July 15.

The union representing University of Virginia employees is asking students, faculty and staff to show support in its effort to gain better wag…

UVa neuropsychologist: Getting right back on after a fall may not be best idea for riders

Stephanie Bajo has been tracking emergency visits to the UVa Medical Center and has found a higher rate of concussions among horse riders than among athletes in high-impact sports.