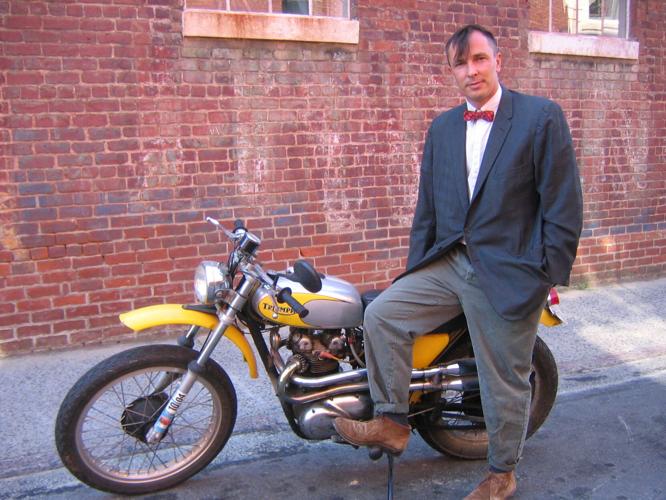 HAWES SPENCER, THE DAILY PROGRESS Matthew Farrell with his father's old Triumph motorcycle. Farrell was an integral part of the city's early arts scene in the 1990s. 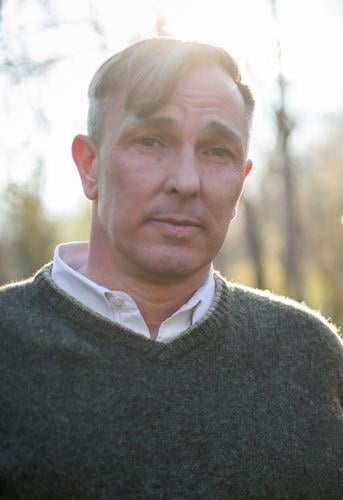 The man slain early Tuesday at a house on Stony Point Road was an author and leader in Charlottesville's emerging 1990s arts scene.

Matthew Sean Farrell, 53, was the only child of a social worker and an Army commando turned French professor. He grew up near Farmville, spent several years after college in the U.S. Marines Corps and settled into a life of provoking the arts in Charlottesville.

"It's hard to put into words how enthusiastic he was for the arts scene in the 1990s," said playwright Joel Jones. "He saw everything and did everything."

Jones said Farrell's support for the arts was both thoughtful and specific.

"If you put on a show, he'd be in the audience," said Jones. "It wasn't just, 'great job, guys.' He was the first and only person to send me a typed thank you note on card stock for a play that I put on in my apartment."

Jones was among the artists whose work appeared in a cable television variety show Farrell created in 1992. Early installments of "Let's Get Lost" featured poets, plays, and a group of musicians known as the Dave Matthews Band.

"He had an ability to imagine that what happened in this cut-off town was important," said Jones.

Late in 1992, inside a little brick building at the back of the Jefferson Theater, Farrell created one of the city’s first art galleries unconnected to donors, the short-lived Galerie Oktoberfaust.

Farrell also created the Hypocrite Press, a micropress which placed locally-penned prose and poetry into local shops. Among them were plays by Jones and two novels by Farrell himself, "The Noble Salvage" and "Laughing Friends Deride."

For no charge, Farrell would promote a rootsy Charlottesville band called "The Hogwaller Ramblers," which enjoyed a decade-plus run at several venues including Fellini's restaurant.

"He was always incredibly supportive," recalled that band's frontman, Jamie Dyer. "He was just a nonstop booster."

Friends say that Farrell worked full-time day jobs to pay the rent at the Altamont apartments, where he lived before moving to Stony Point. His jobs included lengthy stints at Lexis-Nexis legal publishing and at Money Market Directories, now part of S&P Global.

Farrell didn't just work quietly in the arts. On Tuesday, musician David Wellbeloved posted a picture to Facebook reminding friends of the Halloween party at Live Arts in 1993. Attempting to curry a literary feud between himself and University of Virginia English professor John Casey, Farrell was naked with only Casey's National Book Award-winning novel "Spartina" in a strategic location.

If the public Farrell could be outrageous, friends say the private Farrell was genteel, prone to wearing bowties, giving gifts of homemade absinthe, and bowing deferentially when offering a greeting.

Dyer recalled once needing a straw hat for a photo shoot.

"I went to Farrell's apartment at the Altamont and asked him if he had a boater. He did," said a still-amazed Dyer. "Who the hell has a boater at the ready? If I recall correctly, he offered me spats too."

By the late 1990s, around the time that Farrell earned a master's degree in philosophy, his public pronouncements on Charlottesville turned critical. He complained that Charlottesvillians were getting too focused on national, rather than local, issues.

"I love and believe in the people, but they sadden me lately," he told C-ville Weekly in 1999.

In 2006, Farrell told the now-defunct Hook newspaper that because Downtown Mall strangers stopped routinely returning his hellos that Charlottesville had "jumped the shark."

An early embracer of social media such as Facebook, Farrell would later eschew all social media and would, friends said, routinely call himself a hermit.

Actor Bree Luck said she met Farrell about a dozen years ago between takes while filming the movie "Danger. Zombies. Run." on his property

"He was as sharp as he was kind," said Luck. "He was a complete gentleman who also had such an incisive way of questioning a thought and deepening the conversation."

Friend Rich Tarbell was another who stayed in touch, in part because his daily commute carried him past Farrell's house.

"I knew something was amiss, Tarbell wrote on Facebook of his Tuesday morning commute. "The driveway did not look right."

In a telephone interview, Tarbell said that some unknown vehicles were there and obscuring Farrell's two vehicles, his beige military-style vehicle and his aqua blue Thunderbird convertible.

"A few hours later when I was driving home," Tarbell wrote in his post, "there were about 20 police cars in the yard." Tarbell said he pulled his vehicle over and sent Farrell a message to ask him if he was okay.

"He was already gone, and she was arrested."

Shawna Marie Natalie Murphy, 38, Farrell's girlfriend and housemate for several years, was arrested by Albemarle County Police on Tuesday and charged with second degree murder and using a firearm to commit a felony.

Police and rescue crews had responded to a report of a domestic disturbance on the 2100 block of Stony Point Road. They found Farrell dead of a gunshot wound.

Recalling happier times, Dyer said Farrell loved to tinker with vehicles, once taking a saw to the top of hard-topped sedan to fashion a home-made convertible. Recently, Dyer said Farrell began tinkering with his back yard to recreate the look of a World War I-style trenches. Just for fun.

"He'd spent months digging and filling sandbags," said Dyer. "It's an amazing one man engineering project. We had plans to sit in the bunker and make coffee in some 100-year-old coffee gadget when he was finished."

Farrell's father, Alan Ford Farrell, recalled how he was in Laos working as an Army commando during the Vietnam war when his only child was born in January, 1969.

"I got his birth announced as a radio message," says the elder Farrell, now living in the town of Glasgow. "It said, 'Born on this day. Mother fine. Baby fine.' And that was the end of the message."

Farrell is also survived by his mother, Lynda Farrell, of Farmville.

Police say Austin Lee Edwards, 28, met the girl online and obtained her information by deceiving her with a false identity, known as “catfishing." Edwards was a Virginia State Trooper until his resignation last month.

The city announced the candidate list just six hours before the forum.

The department has responded to 131 calls for shots fired through November 2022.

"We're garden clubs; that's what we do."

D' Sean Perry, 22, and a linebacker and defensive end for the University of Virginia football team, is one of three people who was shot dead a…

The system is likely to spawn tornadoes and damaging winds after dark Tuesday, from eastern Texas to southern Indiana.

Behind the Headlines: Investigating the Catholic Diocese of Buffalo

HAWES SPENCER, THE DAILY PROGRESS Matthew Farrell with his father's old Triumph motorcycle. Farrell was an integral part of the city's early arts scene in the 1990s.