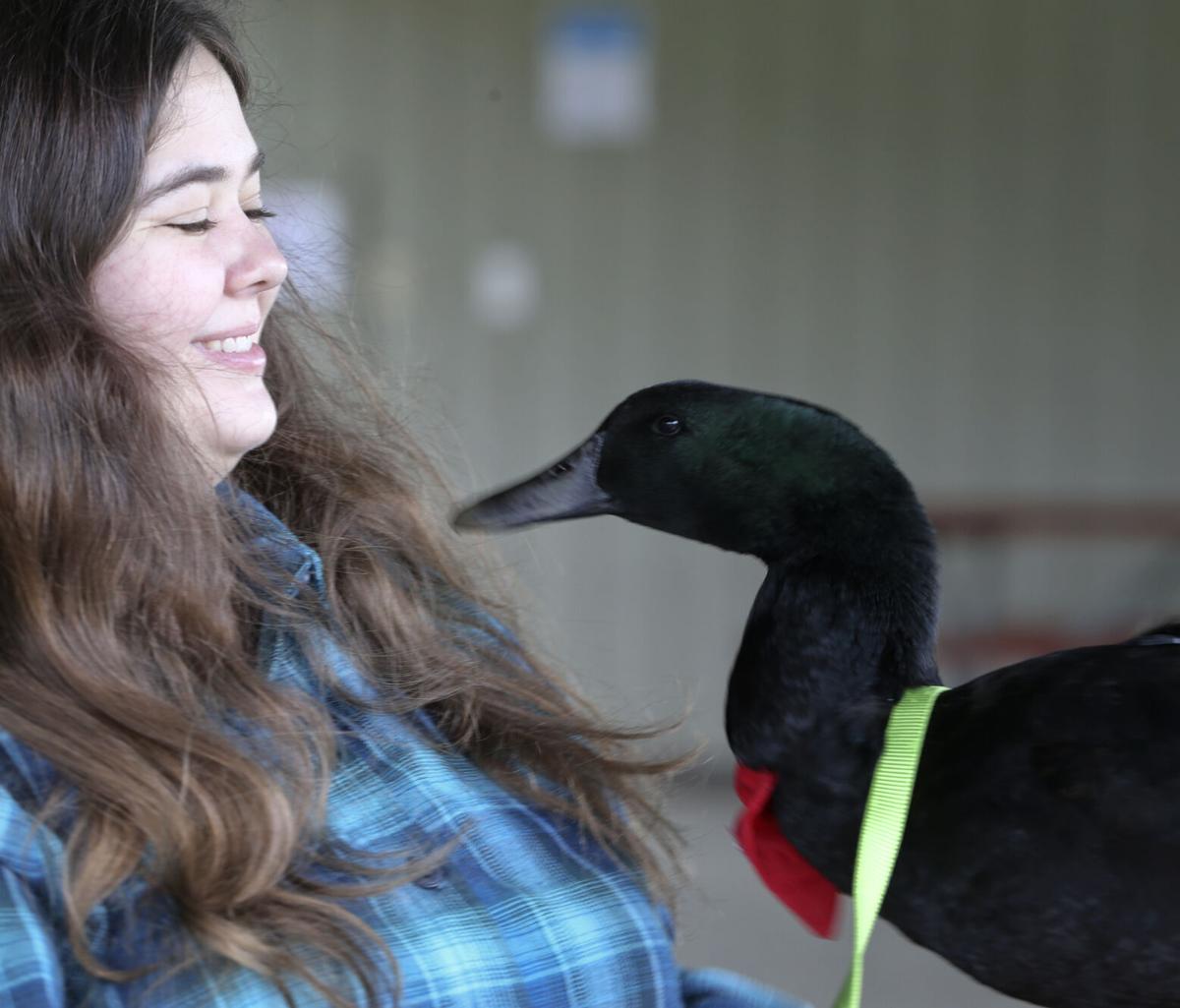 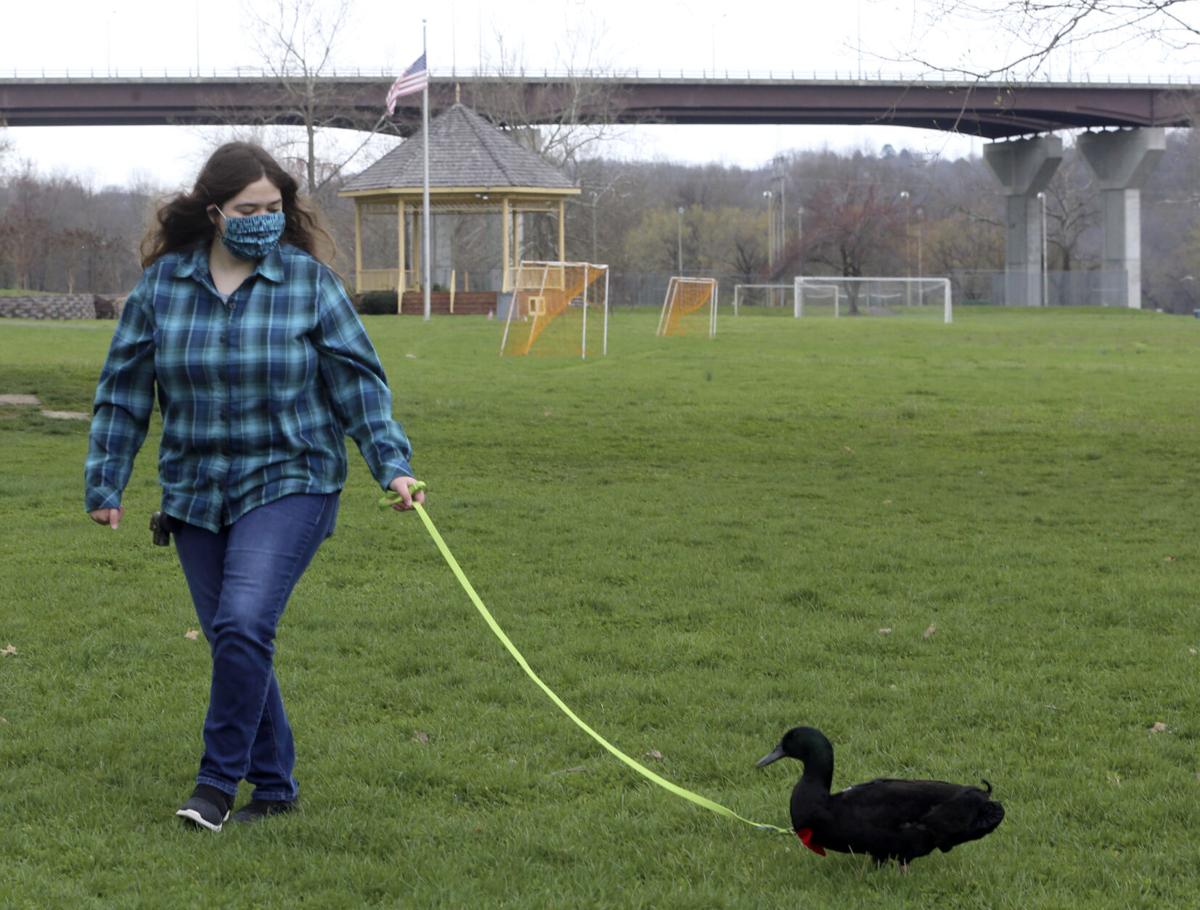 Kat Owens and Jellybean spend time at Bisset Park in Radford. "'Bean is fearless … he doesn't panic. … I feed off his energy," Owens said. 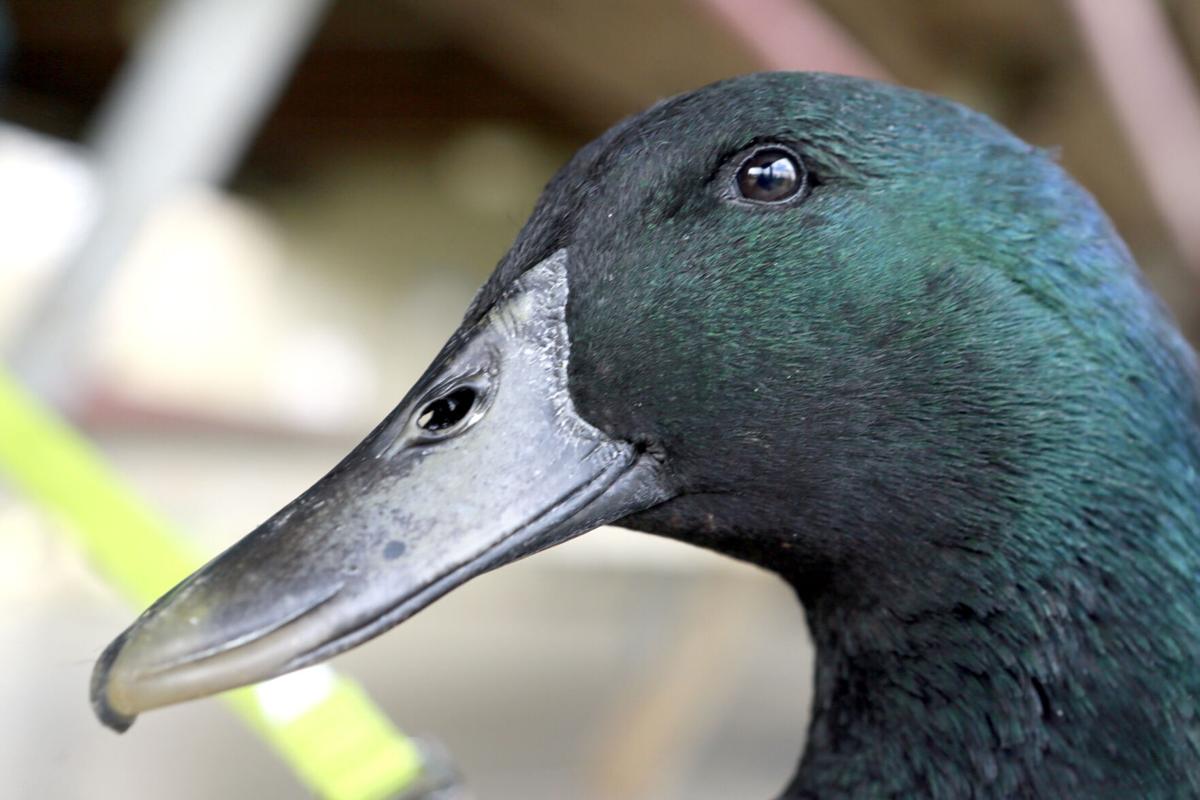 RADFORD — Kat Owens laughed as she said that her best friend is a duck named Jellybean.

The nickname began around her Fairlawn home, Owens said, but has extended to other parts of the New River Valley, thanks to Jellybean accompanying her to all manner of community events the past few years.

“I very rarely leave him at home,” Owens said.

Plenty of people have seen them together — Jellybean on a leash and wearing a discreet diaper that blends with his dark feathers, sometimes snuggling in Owens’ arms, sometimes pacing around her, head darting toward whatever interests him, muttering a constant, soft, quacking cluck.

Jellybean is a Cayuga Black Swedish duck. At nearly 4 years old, he is approaching middle age with a personality that Owens describes as a “cross between a toddler and a dog” in his mix of curiosity and energy.

Owens and Jellybean are so often together because Jellybean is Owen’s emotional support animal. She credits the duck with helping her find peace after years of dealing with an unease that brought on panic attacks and required medication.

“I have horrendous social anxiety and I always have,” Owens said. “’Bean is fearless … he doesn’t panic. … I feed off his energy.”

Owens said that she was nearing the end of high school when a therapist suggested trying a support animal. She got along with her family’s dog and cat, but said that she did not feel especially connected to them. Online research led her to the idea of a support duck.

She told her parents and soon, a box of young birds arrived as an early 19th birthday present. Owens now calls it “the best thing I’ve ever done.”

Emotional support animals are different from service animals, which are trained to perform specific tasks for their owners, such as dogs helping visually impaired people find their way. Emotional support animals are designated by a letter from a mental health professional, but their general characteristics may be much the same as those of regular pets.

It is the support animals’ role in people’s lives that sets them apart.

Owens said that bonding with ducks subdued the anxiety to the point where she reduced, then stopped taking medication for it. Visits with her therapist became occasional.

“I can’t make it 10 feet somewhere without somebody stopping me.”

Owens said she gets angry about people falsely claiming their pets are support animals. Some people go online to get official-looking documentation, then use it to try to take their pets into stores or restaurants, Owens said. She blames the situation for a backlash that affects actual support animals and their owners, with businesses that once were accepting of support animals now banning them.

But on a recent visit to Radford’s Bisset Park, Owens and Jellybean were more focused on his antics.

Jellybean is the son of one of Owens’ initial flock, who died while sitting on a clutch of eggs, Owens said. Heartbroken, Owens said she ordered an incubator from Amazon and had it overnighted to her.

Soon Jellybean was born and imprinted on Owens. The two became near-constant companions. Owens said she worked hard to teach Jellybean to behave in public. At the same time, she was learning the duck’s quirks.

Jellybean gets a daily bath, which helps maintain his natural oils, but otherwise doesn’t show much interest in getting in the water. Like other Cayuga Black Swedish ducks, Jellybean does not fly.

Owens quickly realized that diapered or not, there was a lot of work involved in keeping an indoor duck.

“They are stinky. They poo all the time as babies, “ Owens said. “… It’s messy and crazy but it’s absolutely worth it.”

Life with Jellybean connected Owens to an online community. “We all share pictures of our feathered children,” Owens said, laughing again.

Owens began keeping an eye on local waterways, including Virginia Tech’s Duck Pond, looking for ducks that people dump there. In Western Virginia, any waterfowl besides mallard ducks and Canada geese probably was dropped off by someone, Owens said.

The mallards and Canada geese are federally protected migratory birds. People are not allowed to capture them or take them home as pets.

But Owens watches for a scenario that can be more common around Easter. People get duck chicks for their children, but as the birds get bigger and harder to care for, they are abandoned somewhere near water. Unfortunately, these ducks may not know how to care for themselves.

Owens recounted spotting, then eventually rescuing a duck from Tech’s Duck Pond. She had thought it was a young bird. But captured, it turned out to be a very old duck — who was just skin and bones because it wasn’t finding food on its own, Owens said. A female, the duck had been plucked bald in places by aggressive males, she said.

Owens said she ended up driving an hour and a half into West Virginia to deliver the duck to a person she’d met online who could care for it.

In her non-duck life, Owens worked seven years at the Christiansburg Walmart, and recently began a new job at a store in the New River Valley Mall. Jellybean has never accompanied her to work, Owens said.

This fall, she plans to take classes at Radford University to finish a bachelor’s degree in marketing. Owens said she already has an associate’s degree in science and will soon receive one in business. Eventually, Owens said, she would like to open her own flower shop.

But to relax, Owens said she’ll keep turning to Jellybean — and to two of his relatives who live in a outdoor pen. The outdoor pair are “normal ducks,” but still soothing to spend time with, Owens said.

“I will sit down on a five-gallon bucket in the duck pen,” Owens said, “and just hang out.”

Service animals are a necessity for people living with disabilities, especially during travel. Unfortunately, many people without disabilities…

American Airlines says it will no longer allow emotional support animals starting next week. The change matches a new Department of Transportation regulation.

Kat Owens and Jellybean spend time at Bisset Park in Radford. "'Bean is fearless … he doesn't panic. … I feed off his energy," Owens said.