Attorney General Jason Miyares wants the Supreme Court of Virginia to grant him access to sealed records of a former chair of the Virginia Parole Board, which he's now investigating.

Miyares filed the motion Wednesday asking the court to grant him access to the sealed records, which relate to a prior investigation of Judge Adrianne Bennett, a former parole board chair, by the state's Judicial Inquiry and Review Commission (JIRC). 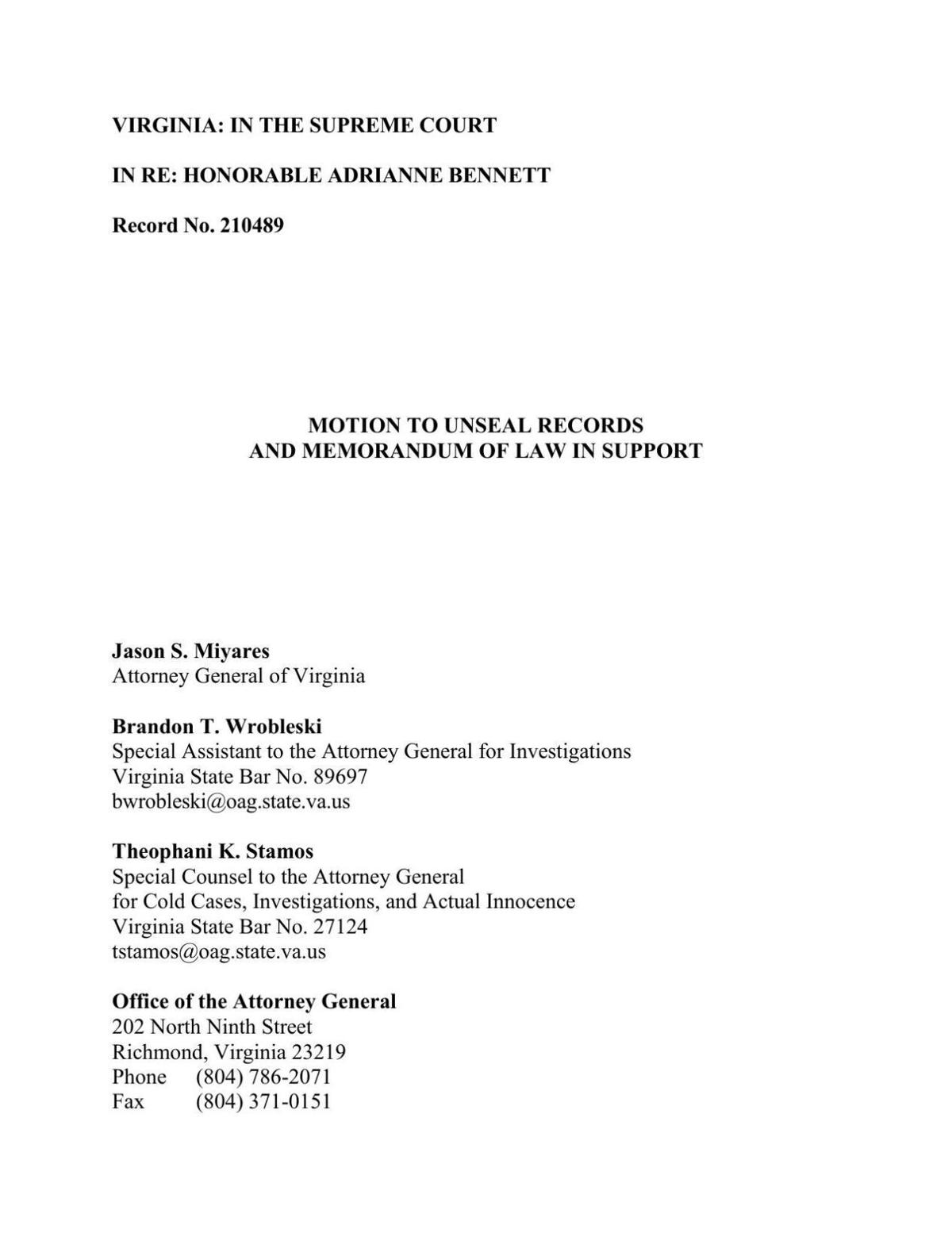 Bennett was the chair of the Virginia Parole Board in 2020 during a time it was later found to have violated rules in its process used to release certain people from prison. The Office of the State Inspector General in 2020 found the parole board violated law and policy, including not properly notifying victims and prosecutors about people being released from prison on parole.

JIRC investigated Bennett and suspended her from the bench in Virginia Beach, where she is a juvenile court judge. Bennett filed a petition at the Supreme Court in 2021 challenging her suspension. The court denied her request but put the entire file under seal, only opening up portions of the records last month after the Richmond Times-Dispatch challenged the sealing.

Miyares' filing said the Virginia State Police are assisting in his investigation of the parole board, a probe Gov. Glenn Youngkin requested in an executive order.

The General Assembly elected Bennett as a judge on March 3, 2020, and she was seated on April 16 of that year. Miyares' filing said that starting on March 3, she was subject to rules governing judges, complaints about which are reviewed by JIRC.

"The Attorney General’s investigation to date has revealed that during these 44 days, Judge Bennett took direct, and often personal, action with respect to the parole and early release from parole of many violent convicted felons," the attorney general's motion says.

"The Attorney General has determined that a full, transparent accounting of Judge Bennett’s actions as Chair of the Board is necessary to restore public confidence in the Board."

Virginia law protects the confidentiality of JIRC investigations. But if JIRC believes a judge has violated the state's Canons of Judicial Conduct, it will make a public filing at the Supreme Court. No such filing was ever made regarding Bennett, and the court was divided on whether all of the records she filed on her own in an attempt to challenge her suspension should become public.

The court's ruling on releasing some of her records was 4-2, and the two dissenting justices argued that there was no satisfactory legal reason to keep the records under seal and that they had lost their confidential character.

Miyares' motion said he agreed, arguing that it appeared to be the first time a sitting judge in Virginia had challenged a suspension that way.

"Neither the plain language of the Code nor the general confidentiality interests articulated by the Supreme Court of the United States contemplate continued confidentiality of judicial review proceedings when the subject judge asks a state’s highest court to intervene to stop an investigation she alleges is unlawful," the attorney general's motion said.

"And neither of these authorities contemplate continued secrecy when a state’s governor has ordered an investigation mirroring the Commission’s inquiry into the same judge."

Miyares also argued that Bennett's interest in the continued sealing of the records was inferior to his interest in ensuring the integrity of an ongoing investigation by law enforcement.

Records showed the inspector general was continuing to investigate allegations against Bennett and the board, but the result of those investigations remains unclear.

The Supreme Court of Virginia issued an opinion Thursday saying it would unseal some records in a case filed by Virginia Beach Judge Adrianne Bennett, who was the chair of the Virginia Parole Board during a time it was later found to have violated rules in its process used to release certain people from prison.

Gov. Glenn Youngkin announced four new members of the Virginia Parole Board on Wednesday, picks he needed to make after state Senate Democrats rejected his previous choices during a battle over personnel appointments.

Va. Parole Board operations have ground to a halt in wake of Senate Democrats' rejection of appointees

Virginia Parole Board operations have ground to a halt with nearly 400 pending parole cases stalled in the wake of last week’s decision by Senate Democrats to reject four of Gov. Glenn Youngkin’s appointments to the board, leaving only chairman Chadwick Dotson. The board members had been on the job six weeks and were in the process of reshaping the agency.

A lawyer for The Richmond Times-Dispatch on Friday urged the court to unseal its order that explained why it closed off the records to the public.

13-year-old is the third to die after N.C. golf cart crash

A 13-year-old injured in a wreck involving a golf cart and a car last week has died.

Gov. Glenn Youngkin will sign a pair of state budgets ceremonially on Tuesday at a produce market in western Henrico County, ending a sometimes combative six-month showdown with the General Assembly over taxes and spending priorities.

The statue is displayed intentionally in its "2020 state." The head is dented and the arm is torn. Pink latex paint is splattered down Davis’ body and on the podium, and flakes of a toilet paper noose are still stuck to the collar of the statue.

One of four escaped inmates who walked away from a federal prison satellite camp in Hopewell has turned himself in, authorities said Monday.

Gov. Glenn Youngkin on Friday hailed the U.S. Supreme Court's decision overturning Roe v. Wade, which returns abortion regulations to the states, and said he plans "to take every action I can to protect life."

'It's not enough': Youngkin signs budgets, says he wants more

Gov. Glenn Youngkin launched a new campaign on Tuesday to get everything he wanted but didn't get in the new state budget he just signed.

The U.S. Supreme Court's decision to overturn a constitutional right to abortion won't have any immediate impact in Virginia, where abortion remains legal up to the third trimester of pregnancy if doctors believe there is a health risk to the patient.

A cave-in inside of a Giles County, Va., mine killed one man Monday afternoon and injured another worker, according to the county’s emergency …

The fatality occurred near milepost 77 in Bedford County around 2:15 p.m. Saturday in the vicinity of the parkway's Apple Orchard Mountain overlook

The body of a Kill Devil Hills woman who went under while swimming in the ocean early Thursday was found hours later on the beach about 5 miles away, police say.