RICHMOND — Almost four weeks into a special session called initially to deal with a $2.7 billion projected hole in the state budget, the Virginia General Assembly is still looking for a road map to an agreement on how to fill the gap.

The House of Delegates and Senate haven’t agreed on a process for adopting their budgets and reconciling their differences, much less on where to find money to pay for some of the more than $2 billion in spending priorities that Gov. Ralph Northam proposes to cut because of a public health emergency he declared on the same day the assembly adopted the $135 billion budget in March.

“I haven’t heard anyone say, ‘Here is the plan,’” said Secretary of Finance Aubrey Layne, who will appear before the Senate Finance & Appropriations Committee on Tuesday to brief lawmakers on revenues to pay for spending in the $46 billion general fund budget. The general fund, supported by state taxes, chiefly goes toward core services such as education, health care and public safety.

The lack of clear direction has frustrated some lawmakers, especially Republicans who are in the minority in both chambers of the assembly for the first time in more than 20 years.

“We’re just searching for what the process is,” said former House Speaker Kirk Cox, R-Colonial Heights, a member of the House Appropriations Committee who is exploring a run for the Republican nomination for governor next year. “That is very frustrating.”

Even some Democrats are unsure about what the next step will be as the assembly begins to move beyond legislation on police and social justice reforms that have dominated the first 24 days of the special session.

“Communication has not been good between the two bodies,” said Sen. R. Creigh Deeds, D-Bath, a new member of the Senate Finance and Appropriations Committee.

As chairman of a joint subcommittee on mental health, Deeds is looking for ways to salvage some of the $135 million in proposed new spending on behavioral health care that the assembly froze in the budget in April and Northam now proposes to cut. “I don’t know what’s happening with the budget,” he said.

The special session began with a fight over a procedural resolution that the House adopted and the Senate rejected because the bodies couldn’t agree on the operating rules, including those for acting on the budget and new revenue forecast that Northam proposed on Aug. 18.

“There will be a collaborative decision made between the Senate and the House, but that has yet to be determined,” House Appropriations Chairman Luke Torian, D-Prince William, said Friday.

Torian’s committee has been focused on reviewing the cost of legislation proposed in response to the death of George Floyd in police custody in Minneapolis in May, as well as other incidents of alleged police brutality against African Americans. Floyd’s death ignited public protests across the country to call for laws to make law enforcement more accountable, particularly for use of deadly force.

The House committee also is reviewing amendments that panel members and other delegates have proposed to the governor’s budget. Senate Finance and Appropriations is not considering member amendments because committee leaders say that has not been the practice in previous special sessions.

“We are working to put together the House budget,” Torian said.

Cox credited Torian for communicating with Republicans about the committee’s work. “Luke has been good to us,” he said.

But the former speaker faulted the House Democratic leadership for its handling of a special session that has been both intermittent and virtual — conducted entirely online — since the opening day proceedings at the Siegel Center in Richmond. The Senate, in contrast, has met primarily in person at the Science Museum of Virginia in Richmond.

“I think the process has been very flawed,” said Cox, who called the leadership “uncommunicative” in letting members know their day-to-day schedule and duties.

House Speaker Eileen Filler-Corn, D-Fairfax, did not respond directly to her predecessor’s criticisms, but said, “At the start of the special session, the House Democratic Caucus laid out a thoughtful, bold plan to support Virginians during the COVID-19 pandemic and pass long-overdue improvements to policing and our criminal justice system — we are delivering on those critical imperatives.”

“We look forward to finishing this special session as strong as we have started it, as we work with our colleagues in the Senate to continue to deliver for families, students, workers and communities across Virginia,” Filler-Corn said.

The remaining work of the session, in addition to reconciling differences on legislation, is the budget.

“As the House continues to work through the appropriations process, the speaker is committed to passing a budget that supports students, workers, families and businesses while maintaining Virginia’s AAA bond rating during this unprecedented economic period,” Filler-Corn spokesman Jake Rubenstein said.

Senate Minority Leader Tommy Norment, R-James City, who engineered the defeat of the procedural resolution on the first day of the special session, said in a text message Friday, “Social-justice reform has overtaken the revised budget as the number one priority by some.”

“Having said that, many of the bills being advanced have significant fiscal impacts,” said Norment, a former co-chairman of Senate Finance. “That fiscal reality translates into priorities [that] must be determined and balanced.”

Senate Finance Chairwoman Janet Howell, D-Fairfax, “is responsibly working with our staff to develop a list of options for consideration” of the finance committee and ultimately the entire Senate, Norment said. “Ultimately, the revised budget will be decided in conference with our House counterparts.”

Howell said last week that the committee would not consider any additional Senate bills and will begin “working more intensely on the budget.”

Both chambers are struggling with ways to find money to restore new spending — for public education, mental health and other priorities — without dipping further into financial reserves and risking the loss of Virginia’s AAA bond rating. The high bond rating lowers the cost to the state of borrowing money for a wide range of capital projects and raises Virginia’s reputation as an attractive place for business investment.

Faced with an economic meltdown because of the coronavirus pandemic, Northam did not deposit $600 million into the state’s cash reserve, as previously planned in the revised budget for the fiscal year that ended June 30. He also has proposed to defer the deposit of $300 million into the reserve in the second year of the new budget, although he intends to make an additional deposit to the constitutionally mandated rainy day fund.

Liberal advocacy groups and progressive lawmakers have called for the state to withdraw more money from the Virginia’s combined $1.1 billion in reserves to restore lost sales tax revenue and other previously approved spending for public education.

“There’s a window to use them and the window is going to close,” said Michael Cassidy, president and CEO of the Commonwealth Institute for Fiscal Analysis, which wants the state to withdraw about $375 million from the reserve funds over two years.

However, the governor and assembly budget leaders have been unwilling to touch the existing reserves because of concern about the reaction of national bond rating agencies and the uncertain future of the economy that depends on ending the COVID-19 health crisis. The worst-case scenario considered during the reforecasting process projected a potential revenue shortfall of $5 billion over two years.

“There is little certainty in these new revenue forecasts,” said Jim Regimbal and Neal Menkes, fiscal consultants for the Virginia Municipal League, in a joint presentation Thursday.

Veteran political analyst Bob Holsworth said he would be surprised if the assembly dipped further into the state’s reserves because of concerns about protecting the AAA bond rating. While some progressive legislators “don’t see the bond rating as sacred, as Democrats traditionally have in Virginia,” he said the timing would not be good with all 100 House seats up for election next year, along with the governor, lieutenant governor and attorney general.

“I can’t imagine the Democrats trying to do that the year before an election,” Holsworth said. “Ultimately, the challenge is, if the bond rating is downgraded, it gives the Republicans a ready-made issue.”

Senate Majority Leader Dick Saslaw, D-Fairfax, a senior member of the finance committee, said Friday that he also does not know the process for reaching agreement on a budget. But he said he is heartened by the latest revenue report on Thursday that showed Virginia’s tax collections about $375 million ahead of forecast during the first two months of the fiscal year.

“The numbers are better,” said Saslaw, who hopes to get “a different picture” when Layne, the finance secretary, appears before the committee on Tuesday.

Administration officials still take a cautious view about any big spending commitments that would require recurring state revenue to pay for them, at least until another revenue forecast and another assembly session that will begin in January.

“I’m going to try to tamp down their expectations,” Layne said.

The law is designed to reduce gun-related deaths, including suicides, by confiscating a person’s guns or preventing the purchase of firearms.

The Supreme Court of Virginia has rejected a challenge to the wording of a ballot question tied to a constitutional amendment on redistricting.

Should COVID-19 vaccine be mandatory in Va.?

“That’s what all the heavy lifting and expense has produced — a pitiful return, during a period when markets were very favorable.”

Qualified immunity reform once again voted down in Virginia legislature

“Let me just suggest to each and every member on this committee a tougher nut to crack: Trying to explain to your 8-year-old son why he needs to carry himself differently and why Daddy might get nervous when a police officer pulls him over.”

West's name may appear on some ballots printed before the Sept. 3 ruling, though the judge in that hearing said localities will be responsible for notifying voters that West is disqualified.

Representatives of the largest law enforcement organizations in Virginia on Thursday vented over some of the legislation pending in the Virginia General Assembly and the current state of their profession’s public image. 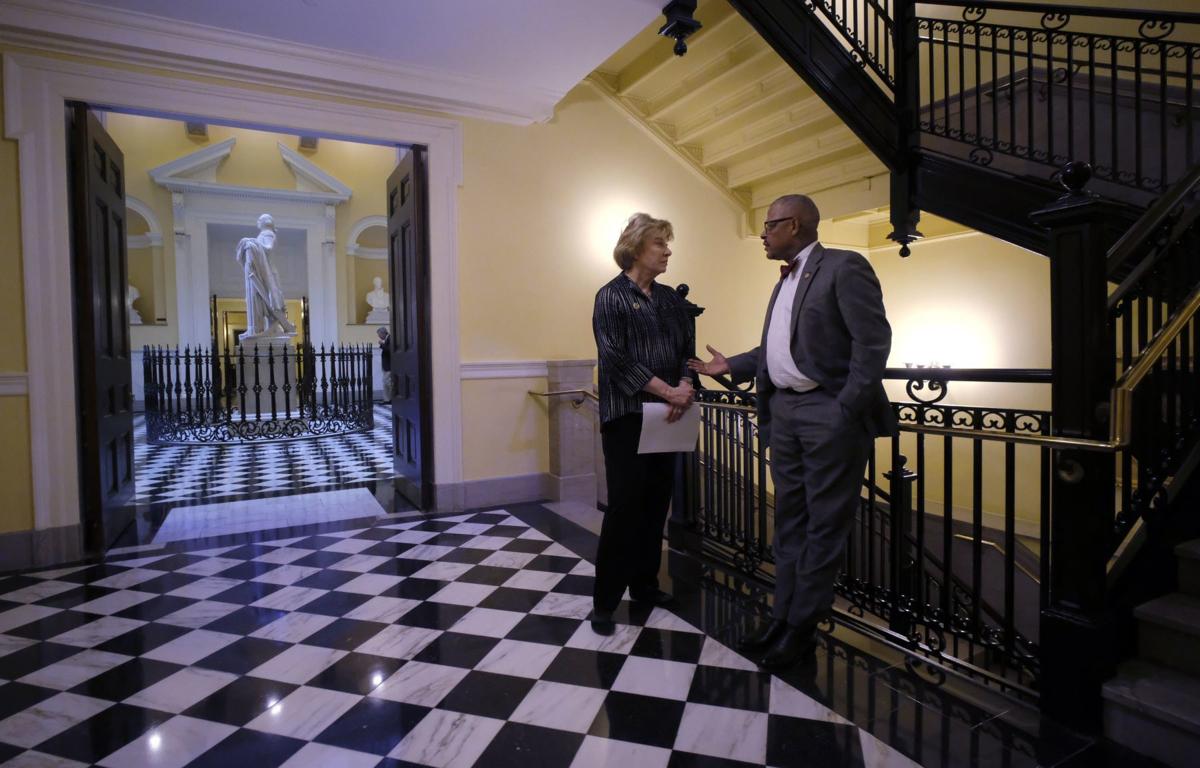 “There will be a collaborative decision made between the Senate and the House, but that has yet to be determined,” Del. Luke Torian, D-Prince William, said about the process for addressing the state budget in the special session. Torian is seen here speaking with Sen. Janet Howell, D-Fairfax, in March. 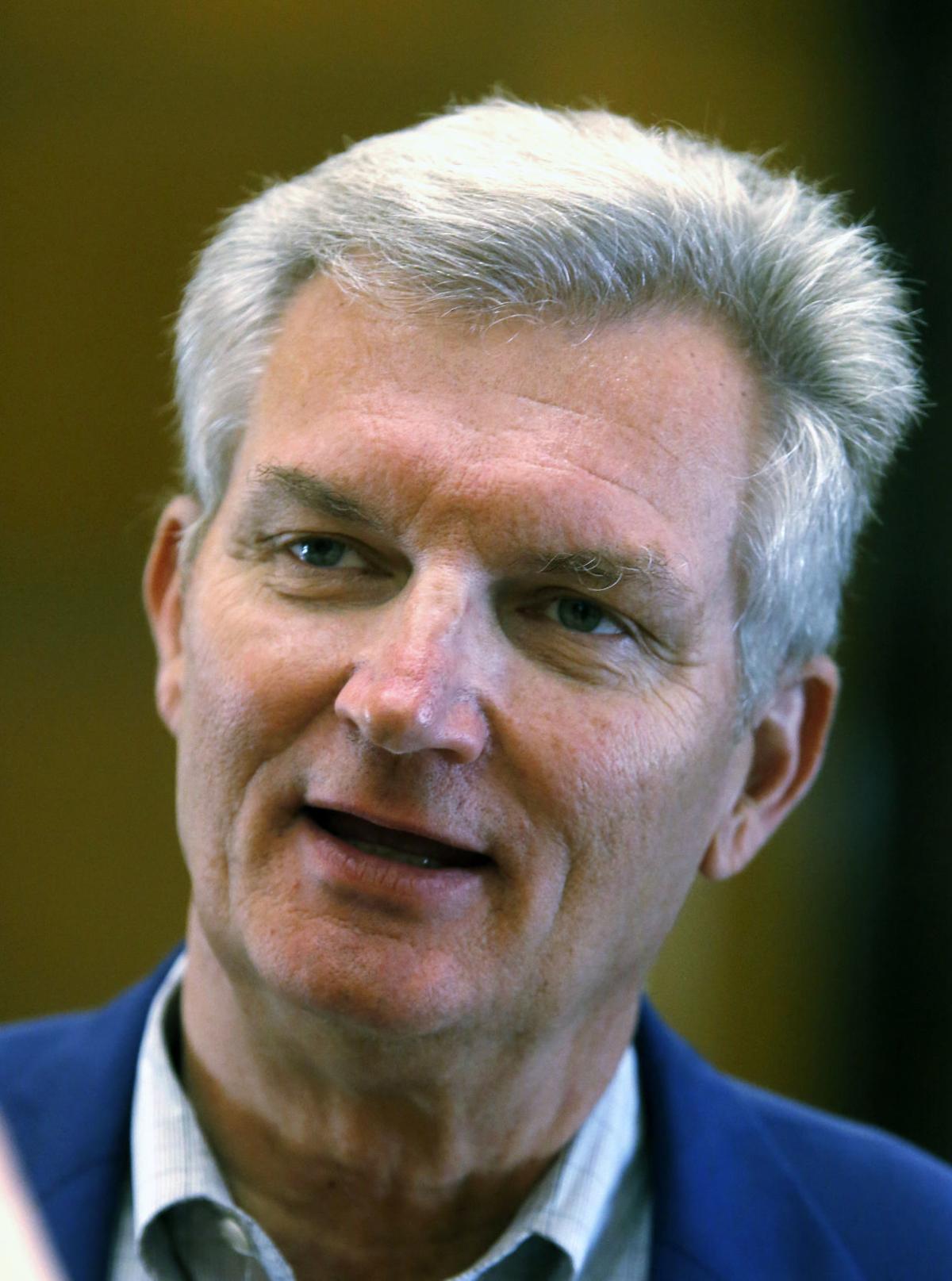