U.S. officials have seized 145 beagles from breeder Envigo's Cumberland County facility and a federal prosecutor is asking a judge to compel the company to stop mistreating dogs in violation of the Animal Welfare Act.

"Envigo’s disregard for the law and the welfare of the beagles in its care has resulted in the animals’ needless suffering and, in some cases, death," Chris Kavanaugh, U.S. attorney for the Western District of Virginia, wrote in a civil complaint against the company filed Thursday in U.S. District Court in Lynchburg.

"Despite being on notice since July 2021 that the conditions at its Cumberland facility fall far below" the minimum standards of the Animal Welfare Act, "Envigo has failed to take the necessary steps to ensure that all of the beagles at its facility are provided humane care and treatment and that the Cumberland facility is operating in compliance with the AWA," Kavanaugh wrote. 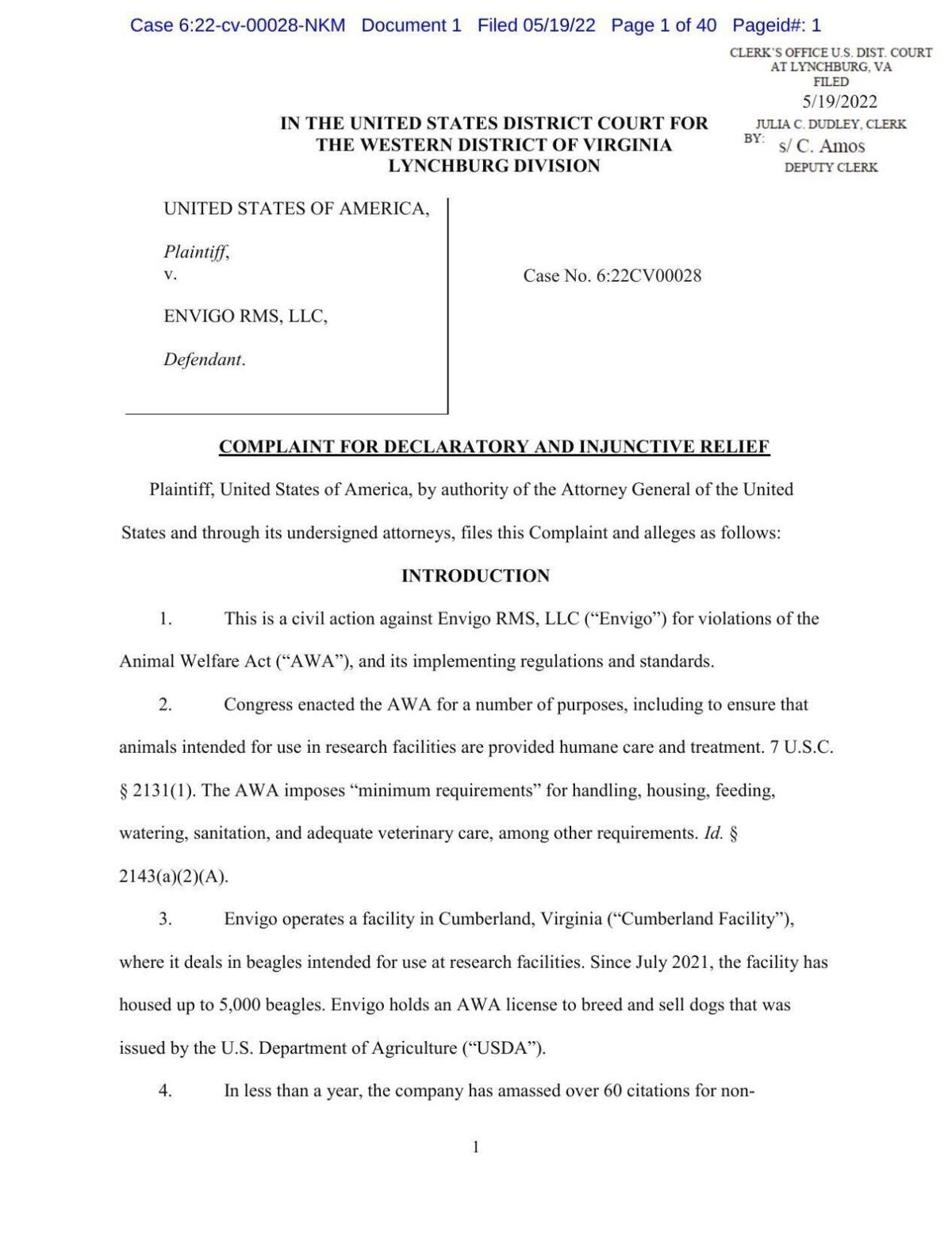 Agents from the U.S. Department of Agriculture's Office of Inspector General and other law enforcement officers began executing a federal search warrant at the Cumberland Facility on Wednesday, according to the complaint. As of the Thursday filing "the United States has seized 145 dogs and puppies determined by veterinarians to be in acute distress."

It says Envigo is "failing to maintain the minimum standards for handling and housing" the beagles safely, is exposing the dogs to unsanitary conditions, and is "failing to employ a sufficient number of qualified employees" to care for "the thousands of beagles at the Cumberland facility." It also says Envigo  is failing to make and retain adequate records about the dogs.

The complaint says "the United States is entitled to an injunction to prevent and restrain Envigo from operating in violation of the AWA and its implementing regulations and standards."

Envigo's practices at the Cumberland site have brought political condemnation from across the aisle in Virginia.

In April Gov. Glenn Youngkin signed legislation to protect dogs and cats at breeding facilities — a legislative effort that stemmed from a series of animal welfare violations at the Cumberland County beagle mill. At the bill signing ceremony Youngkin was surrounded by Democrats, Republicans, animal-rights activists and almost a dozen beagles.

The five “beagle bills” Youngkin signed are meant to restrict some breeders with tainted records from engaging in future sales, and increase state oversight over facilities that breed animals for research.

The agency found dogs with significant dental and skin disease, incidents of dogs euthanized without pain relief, and more.

Mortality records at the facility showed that from Jan. 1, 2021, to July 22, “over 300 puppy deaths were attributed to unknown causes, however, the facility has not taken additional steps to determine the causes of death in order to prevent similar deaths of other puppies in the future,” according to a July inspection report by the USDA’s Animal and Plant Health Inspection Service.

A November inspection report on the facility found that “many young puppies are not receiving anesthesia” before being euthanized. The report also found that euthanasia injections without proper veterinary care “have been found to be painful, stressful, and uncomfortable” and frequently have caused “unnecessary pain and distress.”

Last year, People for the Ethical Treatment of Animals conducted an undercover investigation at the facility, citing mistreatment among 5,000 beagle dogs and puppies bred and housed at the site. PETA posted disturbing video of beagles housed in what it called a “prison like factory.”

PETA Senior Vice President Daphna Nachminovitch said in a statement: "Kudos to federal officials for finally taking the decisive action PETA has been calling for and getting dogs out of Envigo’s barren, cacophonous kennels, where workers sprayed them with high-pressure hoses and deprived them of food and veterinary care.

"PETA finds suffering like this every time we crack open an operation like Envigo, and this needs to be the beginning of the end for this hideous beagle-breeding mill."

Representatives of Envigo did not immediately respond to a request for comment on Friday.

Envigo has previously said that it has reduced the number of older, non-breeding dogs on-site by more 1,300, and its goal is to have fewer than 100 at any time. Envigo also said it has improved the ratio of caretakers to dogs and expects to achieve its goal of 100:1 in the second quarter of 2022.

The company also said it launched an effort to find homes for 480 of its dogs through partnerships with adoption agencies. Sen. Bill Stanley, R-Franklin County, who co-sponsored four of the animal welfare bills with Sen. Jennifer Boysko, D-Fairfax, adopted two of the beagles.

13-year-old is the third to die after N.C. golf cart crash

A 13-year-old injured in a wreck involving a golf cart and a car last week has died.

Gov. Glenn Youngkin will sign a pair of state budgets ceremonially on Tuesday at a produce market in western Henrico County, ending a sometimes combative six-month showdown with the General Assembly over taxes and spending priorities.

The statue is displayed intentionally in its "2020 state." The head is dented and the arm is torn. Pink latex paint is splattered down Davis’ body and on the podium, and flakes of a toilet paper noose are still stuck to the collar of the statue.

One of four escaped inmates who walked away from a federal prison satellite camp in Hopewell has turned himself in, authorities said Monday.

Gov. Glenn Youngkin on Friday hailed the U.S. Supreme Court's decision overturning Roe v. Wade, which returns abortion regulations to the states, and said he plans "to take every action I can to protect life."

'It's not enough': Youngkin signs budgets, says he wants more

Gov. Glenn Youngkin launched a new campaign on Tuesday to get everything he wanted but didn't get in the new state budget he just signed.

The U.S. Supreme Court's decision to overturn a constitutional right to abortion won't have any immediate impact in Virginia, where abortion remains legal up to the third trimester of pregnancy if doctors believe there is a health risk to the patient.

A cave-in inside of a Giles County, Va., mine killed one man Monday afternoon and injured another worker, according to the county’s emergency …

The fatality occurred near milepost 77 in Bedford County around 2:15 p.m. Saturday in the vicinity of the parkway's Apple Orchard Mountain overlook

The body of a Kill Devil Hills woman who went under while swimming in the ocean early Thursday was found hours later on the beach about 5 miles away, police say.