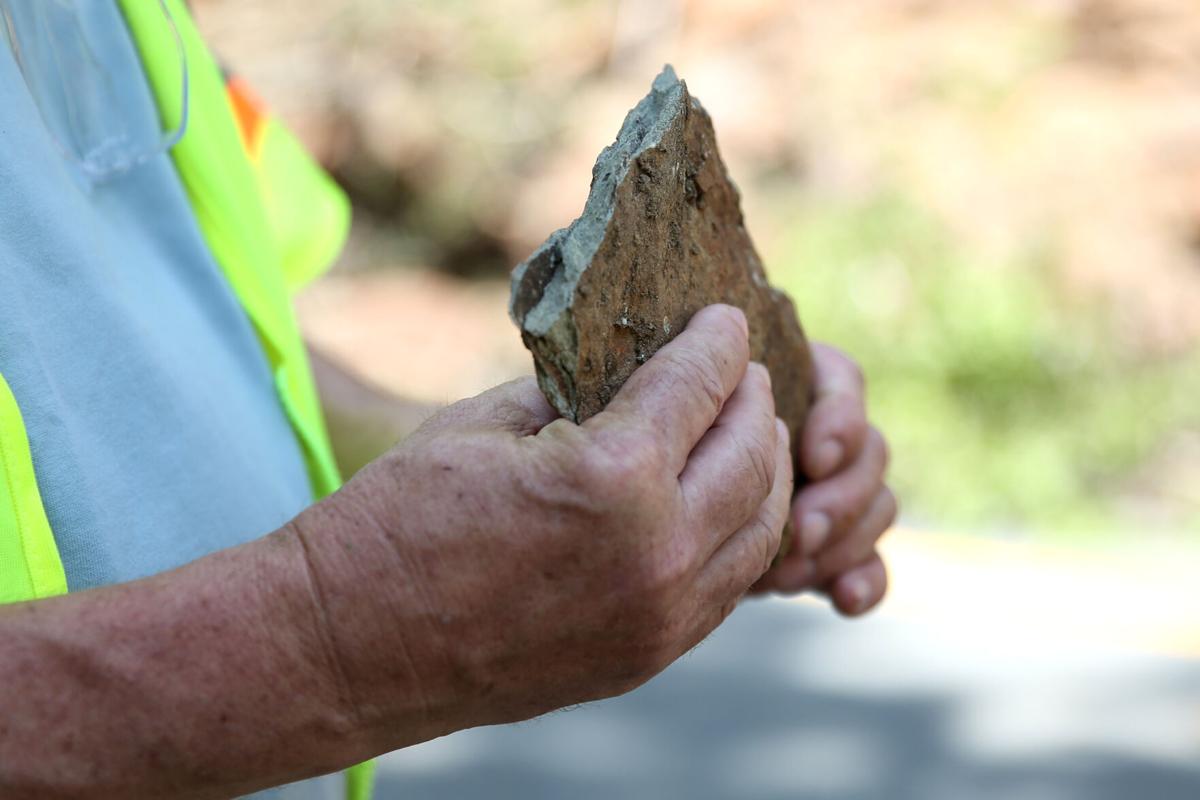 John Davis, a geologist, holds a slated greenstone deposited by a Rockfish Gap rockslide that has closed U.S. 250. 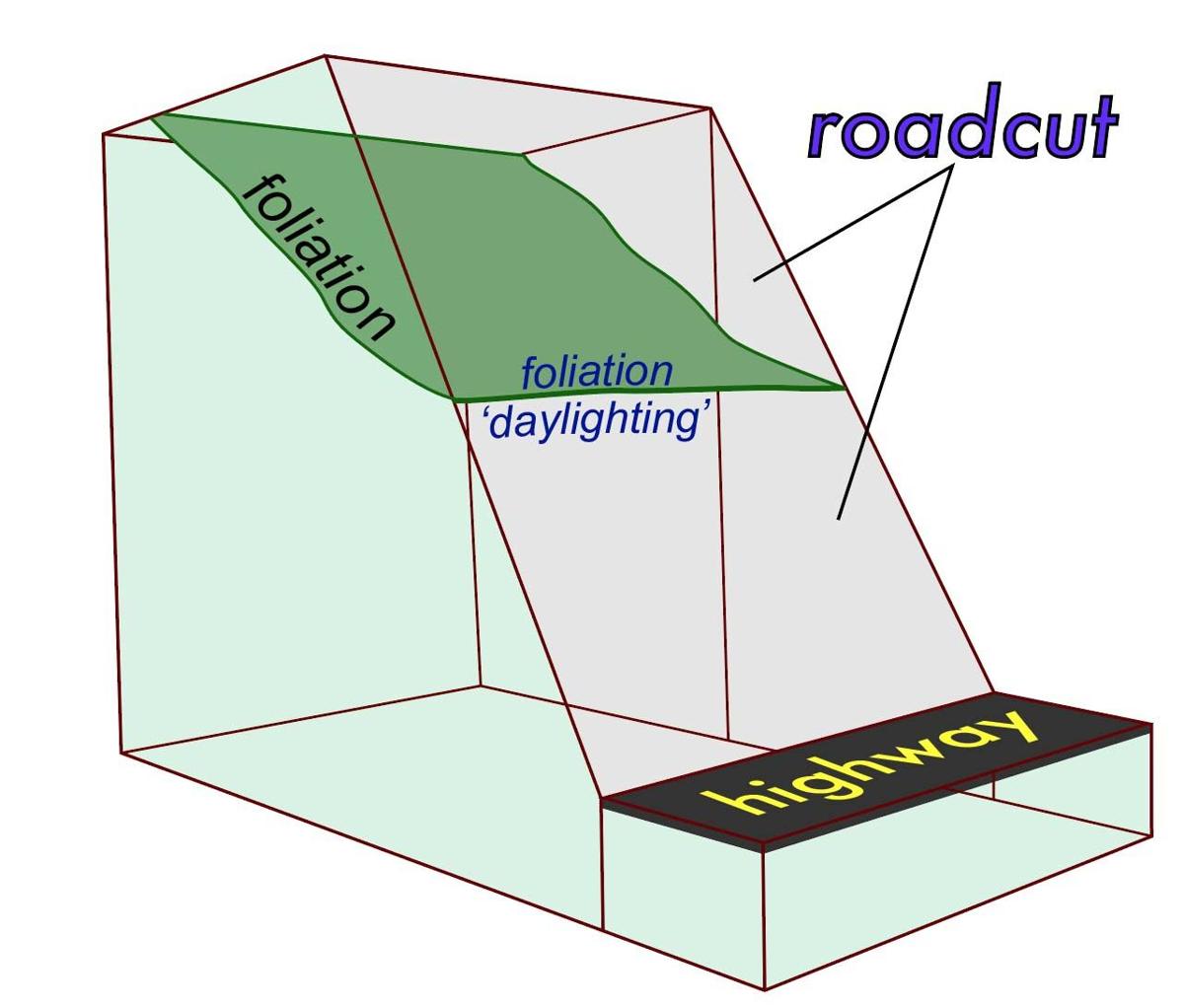 The steep road cut into the mountainside to allow for U.S. 250 exposed or “daylighted” the bedrock which is in layers, also known as foliation. As the rock weathered, the layers loosen and fall, taking soil, trees and other rocks to the road below.

It started with a few rocks dribbling onto the pavement from above and ended with tons of soil, rock and debris shutting the road down.

Rockfish Gap Turnpike, also known as U.S. 250, was shut down Monday as chunks of greenstone bedrock broke free and slid down the steep mountain side sandwiched between Interstate 64 and the turnpike.

Crews on the scene have been working all week to remove the original slide material and pulling down more rock, soil and vegetation to try to prevent a second slide.

The slide occurred near Route 750, known as Old Turnpike Road, just west of the Rockfish Gap Country Store. That’s about 600 feet downhill from the intersection of Route 6 and U.S. 250.

“There is a large area of unstable material on the hillside that must be removed. Once that is complete, additional work will be done to install soil nails and fabric to stabilize the slope above the road,” said Lou Hatter, a Virginia Department of Transportation spokesman.

It could, Hatter said, take a while.

“The road will likely be closed for a period of weeks while the excavation and stabilization is done,” he said. “A better estimate of the time required will be made once work begins early next week. Soil conditions and weather may affect the time needed to complete the project.”

Currently, crews are cutting into the mountain side to remove loose and unstable rock and soil.

“The stuff that’s coming down now is more or less because they are putting a big bucket up into it. Hopefully, they will be able to dislodge it and slowly dig back into the hillside without it moving underneath them,” said Christopher “Chuck” Bailey, a College of William & Mary professor and structural geologist who is assisting VDOT at the slide site.

Bailey said a portion of the hillside has cracked and is unstable, but has not yet fallen.

Bailey has studied the Rockfish Gap, its geology and the unique interaction of bedrock and roads that let traffic flow over the Blue Ridge between Scott and Afton mountains. Last Sunday, on his way to a family gathering in Pennsylvania, he happened to see the start of the slide, known in the geology business as mass wasting.

“I saw smaller rocks on the side of the highway and some trees tilting and I wondered if this was going to be a significant event,” Bailey said. “I wondered if I should stop and take a look, but I had six hours of driving ahead of me. The next afternoon, I heard that it resulted in a road closure. I wished I had stopped.”

Area residents are not just hearing about it, they’re driving around it. The slide has taken out one of only two travel paths between the Shenandoah Valley and Central Virginia, both of which meet at the gap’s summit.

Drivers are left with I-64 as the only route over the summit. U.S. 250 is closed at the Route 6 intersection. Route 6, a curvaceous mountain road, is open to passenger vehicles but not to tractor-trailers, unless they are making local deliveries.

The rockslide occurred in an area of geologic instability where a past rockslide already had occurred, according to Bailey’s assessment on a blog on William & Mary’s website.

Standing next to the slide on Friday, Bailey said he saw a couple of things that indicate why the rock wall came tumbling down.

The rock itself is one reason. It’s schistose greenstone, a fine-grained foliated metamorphic rock that formed in sheets as it went through hundreds of millions of years of continent creation and tectonic processes.

Greenstone rock lies in layers, or foliation, which is its weakness. Smack it with a hammer, Bailey said, and it will break along the layers. The rock face is also steep with the layers pointing down.

“When they put the roads through the mountainside, the rock ended up tilted right down at us. If the rock is going to give way, it’s coming straight down,” he said.

“I also see that a lot of the rock is brown while the rock that didn’t fall is dark green or gray in color,” he said. “It’s brown because the rock has been slowly rotting.”

Rock rots when exposed to weather and elements. Rain, snow and sun slowly break down minerals, leaving the rock to decay and crumble. For greenstone, that creates something akin to clay between the rock layers. That, Bailey said, can act as a lubricant and allow the layers to slide away from each other.

Exactly what made the rocks slide to the ground is not known.

“We don’t have a definite cause for this. We can’t point to a significant rain event, which oftentimes leads to these. There was a significant wind event that occurred a day or two earlier,” Bailey said. “The swaying of trees is modulated in their roots, and that can help open cracks in the rock. As they get wiggled back and forth, they open a little gap.”

Whatever the cause, Bailey said the rockslide is not out of the ordinary for the area, especially with the deep road cuts into the mountainside.

“This shouldn’t be looked at as a one-off event, something that is rare and almost never occurs. They do occur. Some are small enough you never know about them and some are bigger and close the road,” he said.

“It could happen again next year or we could go for several years and then have a ginormous one. To me, we have a geology and a landscape up here that is prime for this stuff. It’s not unexpected,” he said.

The rockslide’s short story is that it took 550 million years to form the rock, about nine decades of exposure to rot it, 24 hours for it to become a major traffic problem and several weeks to get it cleared and stabilized.

“Geology is a science where time and place matter,” Bailey said. “550 million years ago this wouldn’t have happened because the features weren’t here. In 2021, in this time and in this place, we had a significant mass movement that has blocked a road.”

This unknown detail about Stonehenge might blow your mind

This unknown detail about Stonehenge might blow your mind

New book aims to teach history of US civil rights

New book aims to teach history of US civil rights

Some city residents surprised, unhappy with neighborhood groups' letter about land use map

“There is a major problem about the [Venable Neighborhood Association signing this statement. Specifically, in the four years I have lived in Venable, we have never had a single VNA meeting!..."

Charlottesville, Albemarle County will not prosecute people for continuing to wear masks

A state law preventing Virginians from concealing their identities will go back into effect June 30.

“In high school, I think we all had friends who got into romantic relationships and then you never saw them again because they spent all of their time with their partner. Those are the people we’re talking about.”

Police said Kendall A. Jamerson, 35, of Dillwyn, was armed.

Currently, people can only consume alcohol on the Downtown Mall while dining at a bar or restaurant that serves alcohol.

Commissioner Rick Randolph cast the lone dissenting vote, citing the need for a pedestrian crossing at U.S. 29 and transit issues, as well as concerns about road and amenity maintenance costs.

Hannah and Horace Scruggs III will spend the next year paddling the James to create a documentary about the river, their family and the free and enslaved African Americans who plied the river for trade and barter.

Foster Forge School aims to serve children in second through eighth grades who have documented learning disabilities, or differences, as the team says.

John Davis, a geologist, holds a slated greenstone deposited by a Rockfish Gap rockslide that has closed U.S. 250.

The steep road cut into the mountainside to allow for U.S. 250 exposed or “daylighted” the bedrock which is in layers, also known as foliation. As the rock weathered, the layers loosen and fall, taking soil, trees and other rocks to the road below.