Here's a look at some top stories from today, Nov. 23:

Seven Michigan State football players have been charged for their actions during the postgame melee in Michigan Stadium's tunnel last month, according to a statement Wednesday from the Washtenaw County Prosecutor's Office.

No Michigan players are facing charges, which were announced ahead of the teams' final regular-season games. No. 3 Michigan plays rival No. 2 Ohio State on the road Saturday with the Big Ten East Division title at stake.

Both Doan and Asano play for German clubs.

“I believe it’s a historic moment, a historic victory. If I think about the development of Japanese soccer, thinking of players, for them this was a big surprise,” said Japan coach Hajime Moriyasu, who had five Germany-based players in his starting lineup and three, including the scorers, on the bench.

Read all about it here:

The shooting erupted without warning, during a late-night shift change as some workers were congregating in a break room, witnesses said Wednesday of the shooting at a Chesapeake, Virginia, Walmart that killed six people and injured at least four others.

Employee Kevin Harper described narrowly missing an encounter with the gunman -- identified by Walmart as overnight team lead Andre Bing, who'd been with the company since 2010. He had exhibited odd and threatening behavior in the past, was gruff with other employees and expressed paranoid views about the government, coworkers told CNN.

"I just left out the break room," Harper says in a video posted to Facebook.

Employees forced to flee after manager 'started capping people' at a Walmart in Virginia, witnesses say

Get some more of today's top stories here:

No suspect, no weapon in Idaho student killings

10 days in, no suspect, no weapon in Idaho student slayings

Mass shootings in the US: 2022 could be the second-highest year

What to know for Black Friday shopping

Still heading out to find deals on Black Friday? Here’s what to know

Ukrainian authorities say an overnight rocket attack has struck a hospital maternity ward in southern Ukraine, killing a 2-day-old baby. The baby's mother and a doctor were pulled alive Wednesday from the rubble. The region’s governor said the rockets were Russian. The strike in the city of Vilniansk adds to the gruesome toll suffered by hospitals and other medical facilities — and their patients and staff — in the Russian invasion entering its tenth month this week. They have been in the firing line from the outset, including a March 9 airstrike that destroyed a maternity hospital in the now-occupied port city of Mariupol. Ukraine's State Emergency Service said the two-story building was destroyed.

Police and witnesses say a manager at a Virginia Walmart pulled out a handgun before a routine employee meeting and began firing wildly in the break room, killing six people and injuring at least six others. It was the country’s second high-profile mass shooting in four days. Police in Chesapeake say the gunman, who apparently shot himself, was dead when they found him. He was identified as 31-year-old Andre Bing, an overnight team lead who had been with Walmart since 2010. There was no clear motive for Tuesday night's shooting. Employee Briana Tyler says the stocking team gathered in the break room when Bing turned around and opened fire on the staff.

Suspect in killing of 5 at Colorado club held without bail

The alleged shooter facing possible hate crime charges in the fatal shooting of five people at a Colorado Springs gay nightclub has been ordered held without bail in an initial court appearance. Twenty-two-year-old Anderson Lee Aldrich appeared by video from jail Wednesday and could be seen slumped over in a chair with injuries visible on their face and head. Aldrich appeared to need prompting by defense attorneys when asked to state their name by the judge. Police say 17 people were injured by gunshots in last weekend's attack. The suspect faces possible murder and hate crime charges. Aldrich's attorneys say in court filings that the suspect is nonbinary but didn't elaborate.

The last legal obstacle preventing Congress from obtaining Donald Trump's taxes has fallen. On Tuesday the Supreme Court rejected the former president's plea for an order to prevent the Treasury Department from giving six years of tax returns for Trump and some of his businesses to the Democratic-controlled House Ways and Means Committee. The Biden administration has argued that federal law is clear that the committee has the right to examine any taxpayer’s return. In a message on his social media network, Trump says the Supreme Court’s action creates “terrible precedent for future Presidents.” He accuses the court of becoming “nothing more than a political body" with the country paying the price.

House Republican leader Kevin McCarthy is calling on Homeland Security Secretary Alejandro Mayorkas to resign over management of the U.S. southern border with Mexico. McCarthy said the new House Republican majority will open investigations that could lead to impeachment proceedings. McCarthy is positioned to become the new House speaker when the new Congress convenes in January. He said the Republican majority will use “the power of the purse and the power of the subpoena” to hold President Joe Biden’s administration accountable for border security. Speaking on Tuesday in El Paso, Texas, he said the investigations “could lead to an impeachment inquiry.”

Authorities investigating the stabbing deaths of four University of Idaho students as they slept say detectives have looked extensively into information that one of the victims had a stalker and have not been able to verify it. The Moscow Police Department said in a news release Tuesday that investigators have pursued hundreds of pieces of information about Kaylee Goncalves having a stalker but haven't been able to identify one. Authorities have said they have no suspect or weapon more than a week after the Nov. 13 killings shook the Idaho Panhandle town of 25,000 residents.

President Joe Biden's family tradition of spending Thanksgiving on Nantucket may take on a more serious tone this year. Biden is mulling whether to run for reelection in 2024. The president and his family are expected to begin discussing another run over Thanksgiving. Biden and his family decided together that he should run for president in 2020. Biden and his wife, Jill, left Washington on Tuesday evening for the Massachusetts island. They will spend part of Thanksgiving Day calling members of the military to thank them for serving, then return to the White House on Sunday.

The Biden administration says it’s seeing a big uptick in the number of new customers buying private health insurance for 2023 from the Affordable Care Act’s marketplace. Nearly 3.4 million people have signed up for coverage. That's an increase of 17% compared to the same time last year. The boost in enrollment comes as the number of uninsured Americans this year reached a historic low of 8%. The boost in enrollment is largely driven by generous subsidies -- extended through 2025 in the Democrats’ $1.9 trillion coronavirus relief law -- that keep monthly premiums payments at $0 or just a few dollars monthly for most people who sign up.

LSU has moved up to fifth and Southern California is sixth in the College Football Playoff rankings behind Georgia, Ohio State, Michigan and TCU. The top four remained the same for the third straight week, but the teams chasing changed order after Tennessee lost to South Carolina last Saturday night. Two huge games this weekend could create more clarity. Michigan is at Ohio State and USC hosts Notre Dame, which checked in at 15th in the selection committee’s rankings.

Alphonso Davies will make his World Cup debut in a boost for a Canadian team that will be making its return to soccer’s biggest stage for the first time since 1986. Canada’s top player was in doubt for the match after he strained his right hamstring playing for Bayern Munich earlier this month. Davies was cleared to play Wednesday when Canada faces second-ranked Belgium. Germany opens its World Cup campaign against Japan as it attempts to recover from its 2018 elimination from the group stage as the defending champions. Spain plays Costa Rica and Morocco faces Croatia in a full day for Group E.

A shooter opened fire in a Walmart in Virginia late Tuesday, leaving six people dead, police said, in the second high-profile mass killing in a handful of days.

Authorities investigating the fatal shootings of six people at a Walmart said that the shooter bought the gun just hours before and left a note with grievances against coworkers on his phone.

Learn more about a deadly shooting, the war in Ukraine, holiday travel and Tuesday's sports highlights on the latest episode of our daily podcast.

'A new kind of hate'; Walmart shooter may have singled out victims; and more updates

Plus, will travel snarls ease so you can get where you're going for Thanksgiving today? Here are today's top stories, celebrity birthdays, a look back at this date in history, and more -- all you need to know before to grandmother's house you go.

The latest on a deadly shooting at a Virginia Walmart, the war in Ukraine and prayer in public school sports. Those stories and more on our daily news podcast.

The man suspected of killing five people and injuring others at a gay bar in Colorado Springs is facing murder and hate crime charges, according to online court records.

It wasn't until the woman got home at the end of the day that she was met by police officers, who told her the patient was her 17-year-old daughter, Montana.

Grammy nominations, the health of Roberta Flack and Jay Leno, and the death of Robert Clary | Hot off the Wire podcast

🎧 Get a recap of some of this week's top sports and entertainment stories through this special edition of our daily news podcast. 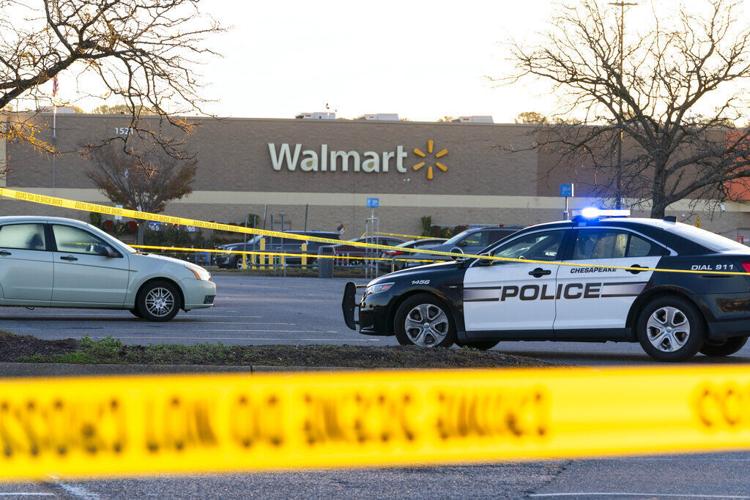 Law enforcement work the scene of a mass shooting at a Walmart, Wednesday, Nov. 23, 2022, in Chesapeake, Va. The store was busy just before the shooting Tuesday night with people stocking up ahead of the Thanksgiving holiday. (AP Photo/Alex Brandon)