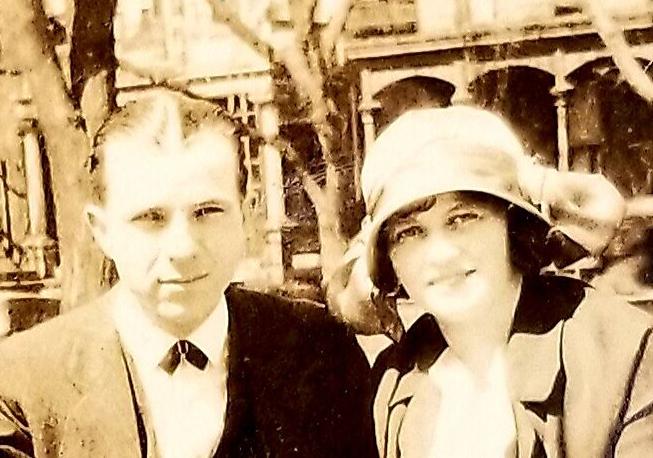 Harold Traub and Maude Dowell fell in love when Traub escorted her brother’s body home for the Great War. Their romance resulted in five generations of descendants. 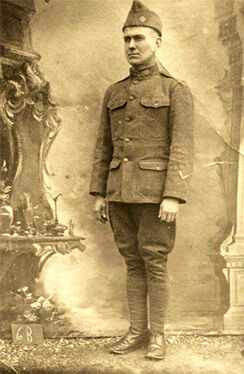 U.S. Army Pvt. Percy Lee Dowell was killed in the last major offensive of World War I. When his body was returned to Albemarle County, the soldier escorting him fell in love with Dowell’s sister.

It’s hard to know what U.S. Army Pvt. Percy Lee Dowell was thinking in that rain of bullets and shell fragments as he and comrades in the U.S. Army’s 116th Infantry Regiment, 29th Infantry Division scrapped with Germans to gain ground around Bois de la Grande Montagne and Molleville Farm.

He assuredly was not thinking that three years after his war ended, the return of his body would be the spark of a romance between his sister and another soldier.

“The story of Percy and my grandparents was told to me in bits and pieces, not in detail, when I was a child. I have since researched and filled in missing pieces,” said Pam Hall, a descendent of Pvt. Dowell’s sister, Maude.

“My Uncle Percy made the ultimate sacrifice. I feel pride in what Percy did and sadness for those who loved him and lost him, but I feel that his death brought my grandparents together and through that chance meeting my mom was born,” Hall said. “Without Percy’s sacrifice, I might have never been born.”

If it sounds a bit dramatic, almost like a Hallmark Movie, it’s only because it is. In this case, however, it’s a true story that Hall checked out herself.

“I started developing an interest in family history when I was maybe eight years old and my parents and Grandma took me to visit the little cemetery [in Albemarle County] where Grandma’s parents and four of her 12 siblings are buried,” Hall recalled.

“Also, my father’s uncle was a published genealogist. I started looking at his research when I was about 21,” she said. “Since I had lost three grandparents when I was young, I felt I couldn’t really know myself if I didn’t know my ancestors.”

The odd story of love and death starts with the birth of Percy Lee Dowell on March 12, 1895 in Gilbert Station, Albemarle County. His father, Reuben Paschal Dowell, was a worker on the railroad. His mother, Martha Ann (Wilkerson) Dowell, took care of the vast and exhausting duties of a woman who is mother to a dozen on a 19th Century farm in rural Virginia.

When the Great War came calling, Percy answered. He signed up and was assigned to E Company, 116th Infantry, a Virginia outfit. It was joined with outfits from New Jersey to form the 29th Infantry Division, known as the Blue and Gray.

After stateside training, Percy’s unit was sent to France in July 1918, where a few months later it would be tossed into the grinder of the horrific and fatal finale for World War I, the Meuse-Argonne Offensive.

Dowell’s last two weeks of life were in hell, beginning in the early morning hours of Oct. 8 when he and his comrades fought pitched battles with bayonets and bullets, man-to-man and hand-to-hand, to wrest ground from the Germans.

Over days, the lines inched back and forth with the Americans and French moving towards Molleville Farm. It was not easy. Besides the head-to-head conflict and shelling, numerous reports of deaths in Dowell’s infantry division are of soldiers shot and killed trying to find water for their wounded comrades.

Other stories tell of soldiers lingering for days, sometimes in the front lines, before dying of horrendous wounds, including one Medal of Honor winner who lived nearly a week with three machine gun wounds in his chest.

Dowell was one of those 44 and one of 258 U.S. soldiers to die from that battle on that day alone.

Exactly how Dowell was wounded, whether from ubiquitous machine gun fire or the thousands of shell fragments that filled the air, is not recorded. What is recorded is that he was wounded in the battle around Molleville Farm and died from those wounds on Oct. 24.

Pvt. Dowell was buried near Verdun, France as the war raged for another few weeks before its Nov. 11, 1918 end. In 1921, he was disinterred and sent back his family to be buried at home in Albemarle County.

But unlike many who fell, Dowell’s body was escorted home with love.

Hall’s research shows Pfc. Harry Virgil Traub being born Jan. 17, 1901 in Canton, West Virginia, but living most of his childhood in Pennsylvania. He entered the Army on July 8, 1920. He was stationed in Fort Meade, Maryland, working mostly as a switchboard operator.

In mid-July of 1921, Pfc. Traub received orders to serve as Dowell’s funeral escort. They left Hoboken, New Jersey with container number 46 on July 21 and arrived in Gilbert Station on July 23. There he met Percy’s mom, Martha Ann Dowell and his 12 brothers and sisters.

“I think Harry took an immediate shine to Maude Dowell because not long after he returned to Fort Meade, he wrote to Martha Dowell and asked her permission to write to Maude,” Hall said. “Over the next two years, Harry and Maude wrote back and forth to each other and when Harry had leave, he would return to Virginia to visit her.”

Hall said Maude was careful to make sure they were properly supervised. They courted for a few years.

“My dear girl, perhaps you will be surprised to get this letter without my waiting for yours, but we are too far apart to do that now,” Harry wrote Maude on Aug. 7, 1923. “I wouldn’t be able to hear from you often enough.”

“It thrilled me to read their letters as it shows how quickly Harry was falling in love. Maude took it a bit slower,” Hall said.

Harry was discharged the summer of 1923 and for his 23rd birthday, he and Maude married on Jan 17, 1924, according to Hall’s research. They made a home in Washington D.C. and Harry worked on the railroad.

“Through her, Harry and Maude have four generations of grandchildren,” Hall said.

Harry and Maude’s descendants mostly live in Maryland with a few in Florida and Missouri, Hall said. There are still several Dowell descendants living in various parts of Virginia, Maryland and New Jersey, most of whom she has yet to meet.

For Hall, finding her roots and her family’s history is exciting.

“I feel elated every time I find a missing piece of information that I’ve spent years looking for,” she said. “Seven or eight years ago, I visited a cemetery in Ohio on land that used to belong to my third-great-grandparents. As I stood there, looking at the headstones of three generations of great-grandparents plus aunts and uncles, I was overwhelmed with awe.”

“It’s a feeling so strong, words don’t really describe it,” she said. “And the story of Harry and Maude is amazing.”

The omicron variant: Dr. Petri explains what you need to know

Dr. William A. Petri, an immunologist at the University of Virginia School of Medicine, answers this week’s questions from readers on COVID-19…

Just as the federal Sines v. Kessler trial was gearing up, Jason Kessler's own Freedom of Information lawsuit was largely dismissed by a Charlottesville Circuit Court judge.

More than 50 now dead in coal mine blast; plus other top news today

Finding other survivors is highly unlikely, officials said. In the U.S., weather may make post-Thanksgiving travel tricky, and hundreds of FedEx shipments have been found dumped in a ravine.

Harold Traub and Maude Dowell fell in love when Traub escorted her brother’s body home for the Great War. Their romance resulted in five generations of descendants.

U.S. Army Pvt. Percy Lee Dowell was killed in the last major offensive of World War I. When his body was returned to Albemarle County, the soldier escorting him fell in love with Dowell’s sister.