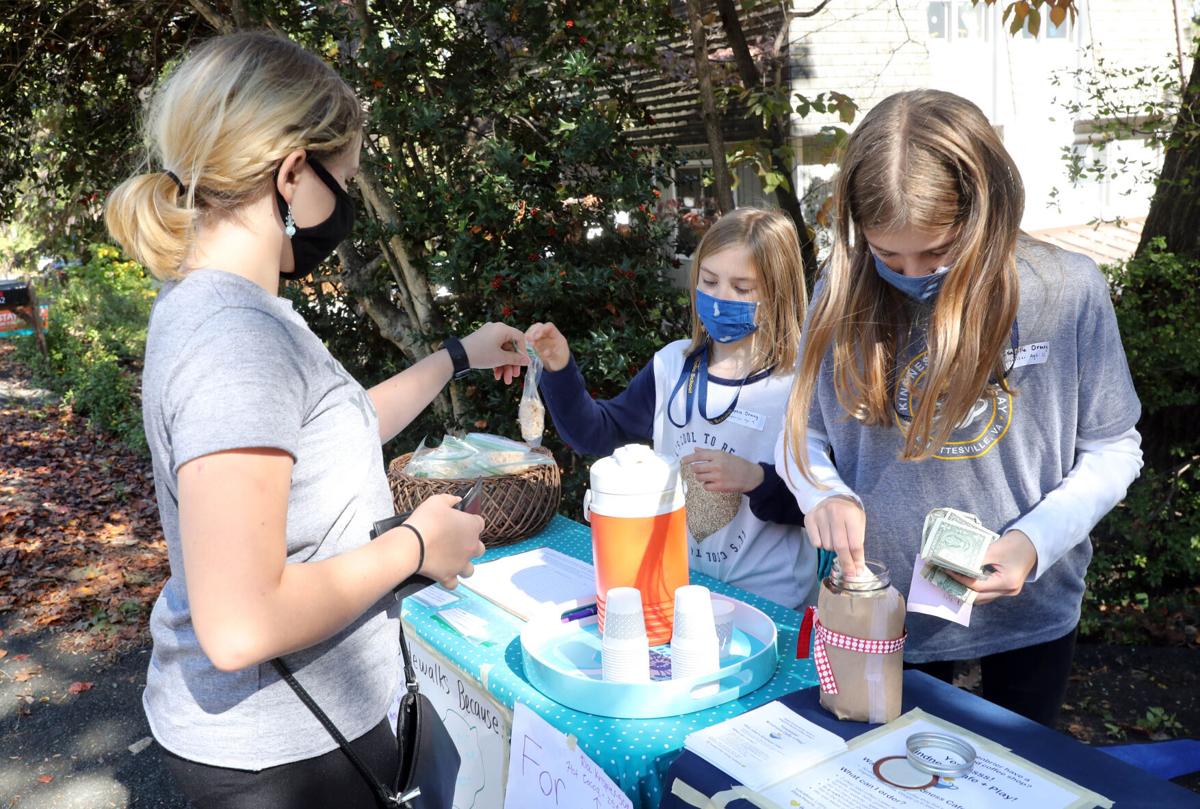 (From left) Organizer Isla Sederberg, 12, purchases Rice Krispie treats from neighbors Sophie Drury, 7, and her sister Isabella, 11, during the “Stay Alive on Yorktown Drive’ neighborhood event on Saturday. Sederberg, who lives on Yorktown Drive, organized the event to highlight the need for a sidewalk on the street. 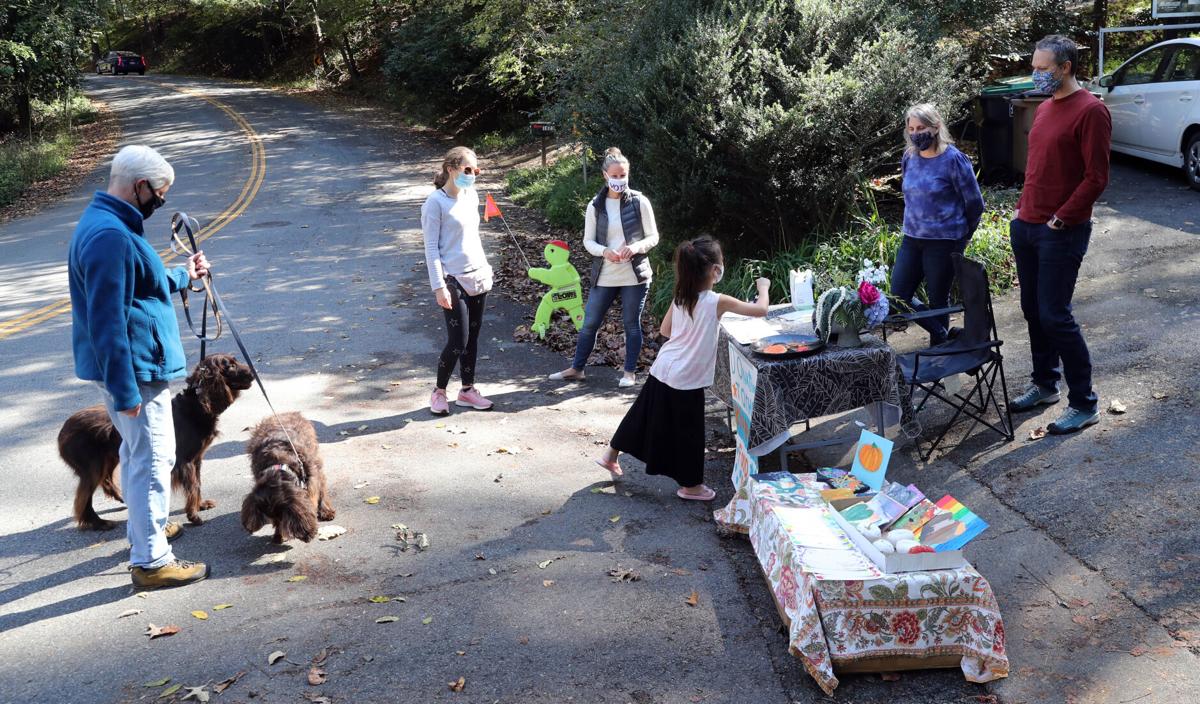 Neighbors and residents participate in the “Stay Alive on Yorktown Drive’ neighborhood event on Saturday. 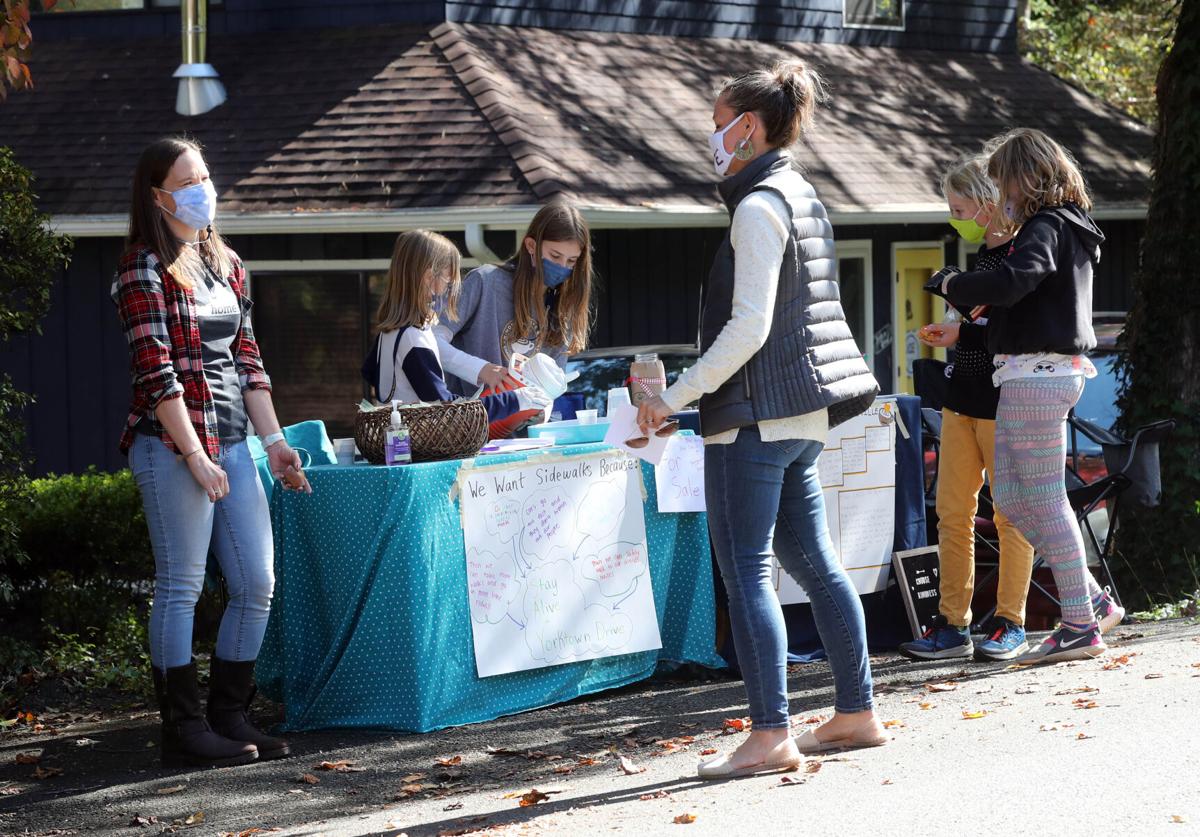 “Stay Alive on Yorktown Drive,” read a half dozen signs spread across the street Saturday as a youth-led march tried to drum up support for a sidewalk on the busy corridor.

The event was organized by the children who live on the street, including Isla Sederberg, a 12-year-old student at Buford Middle School, who said she wanted to raise awareness of the dangers the winding road poses for children, pedestrians and bikers in the Greenbrier and Meadowbrook Heights neighborhoods.

“It’s a road that connects to a couple of busier roads and there are a lot of sharp turns that are really dangerous,” she said. “This is something people on this street have been trying to do for a long time.”

In addition to the signs announcing the event and cautioning drivers, other signs warned drivers of blind corners and overgrowth which affect visibility. Scattered along the street, children and their families set up booths, selling baked goods, crafts and other items while wearing facemasks.

According to Sederberg’s father, Per Sederberg, the neighborhood families raised more than $400, which they plan to donate to area nonprofits including the Kindness Cafe, Blue Ridge Area Food Bank, the Haven and the Charlottesville Albemarle SPCA.

Seated behind a baked goods booth in her driveway, Sederberg, whose family has lived on Yorktown Drive for two years, said she was excited by the turnout. Everything had gone smoothly and she said she hoped the event would draw support and attention from city officials.

Near one end of the street, 12-year-old Isabelle Drury and her family were selling homemade Rice Krispie treats to raise money for the Kindness Cafe, a nonprofit coffee shop that employs adults with cognitive issues.

Drury, who is friends with Sederberg, said she also helped organize the event and was hopeful that a sidewalk would be installed.

“We used to be able to bike at our old house but we can’t do that here because of the cars,” she said. “We also can’t really walk at night either because it’s too dangerous.”

Near the other end of the street, sisters Ella and Rose Mooney were selling cookies. The nine-year-old and six-year-old said they weren’t sure how many cookies they’d sold but they were sure to include a gluten-free option.

At least two Charlottesville City Councilors stopped by the event, talking to residents about their needs and the logistics of a sidewalk project.

Clad in a white facemask bearing the word “VOTE,” Councilor Heather Hill said she understood the residents’ concerns. As with most things in the city, Hill said the issue comes down to priorities and funding, which dictate when and where the city can build sidewalks.

“Everything does come down to prioritization and funding, but I feel like for this community to really have the best quality of life we need to make our streets safe,” Hill said. “With COVID there [are] even more people out and about and when you realize how many kids live on the street and the topography then the need becomes even more apparent.

In the past decade, the planning commission for the city updated the sidewalk prioritization model several times and, as of 2015, was updated to evaluate proposed new sidewalk construction projects based upon scores assigned via point-based criteria.

The point system is broken down into five major categories and areas without existing sidewalks, with high population density and where crashes have happened in the past two years are likely to receive higher scores.

Whether or not the city considers building a sidewalk on Yorktown Drive in the near future, Sederberg said she was proud of the work and the community had done.

“I don’t think you’re ever too young to contribute to something,” she said.

Tyler Hammel is a reporter for The Daily Progress. Contact him at (434) 978-7268, thammel@dailyprogress.com or @TylerHammelVA on Twitter.

(From left) Organizer Isla Sederberg, 12, purchases Rice Krispie treats from neighbors Sophie Drury, 7, and her sister Isabella, 11, during the “Stay Alive on Yorktown Drive’ neighborhood event on Saturday. Sederberg, who lives on Yorktown Drive, organized the event to highlight the need for a sidewalk on the street.

Neighbors and residents participate in the “Stay Alive on Yorktown Drive’ neighborhood event on Saturday.