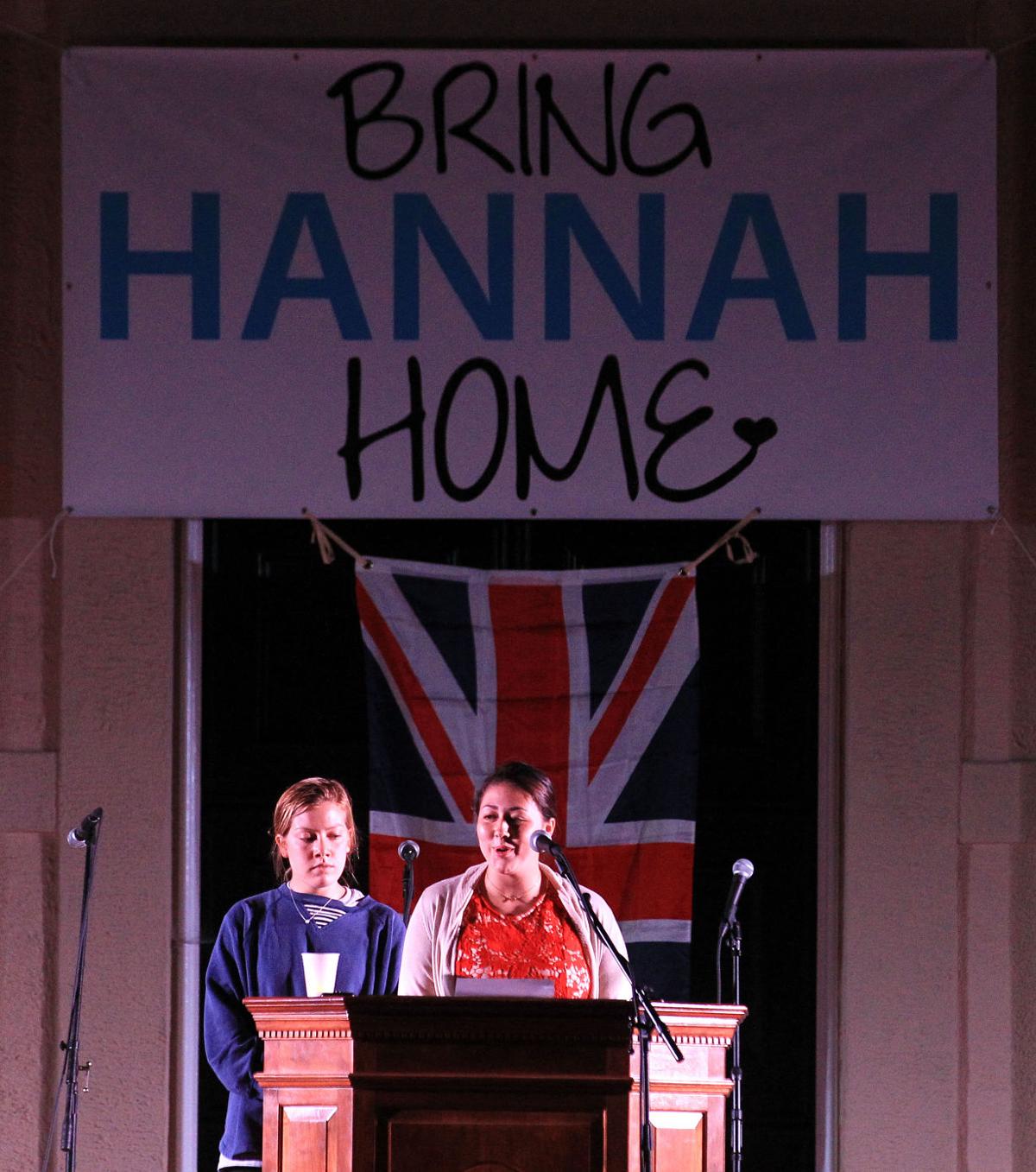 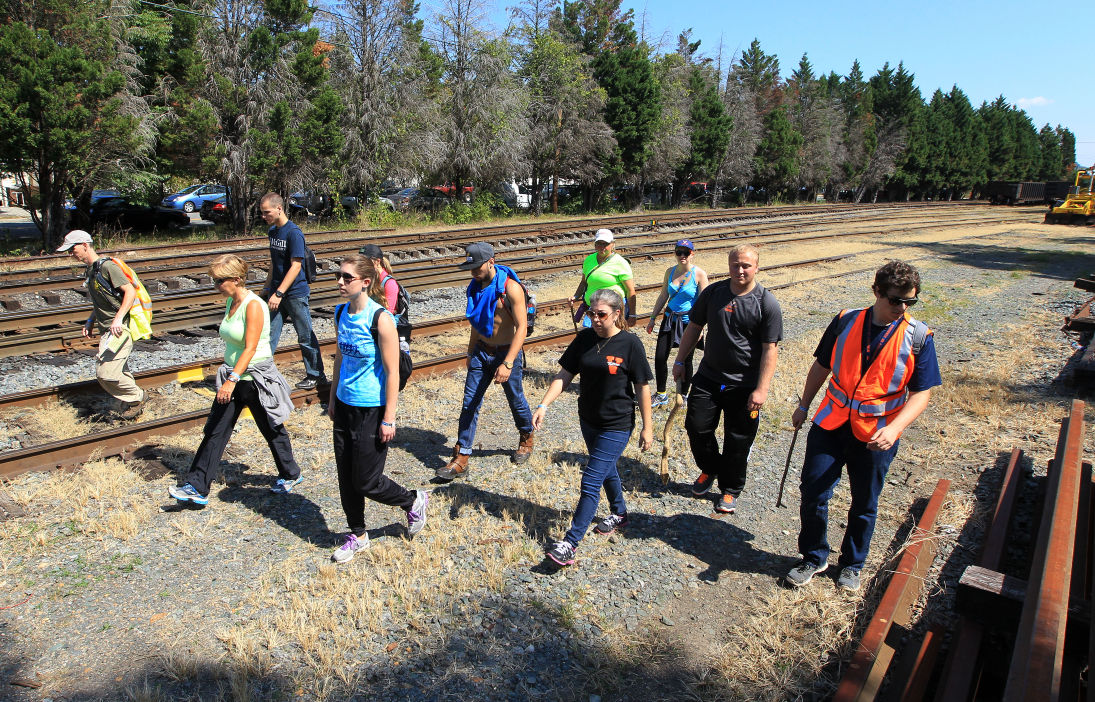 Volunteers walk along the railroad tracks behind the Charlottesville Downtown mall looking for clues during a massive search effort by the community for missing UVa student Hannah Graham Saturday in Charlottesville, Va. Photo/The Daily Progress/Andrew Shurtleff

Each fall, students return to Charlottesville for another year of college life — parties, nights out on the town and drinking are all rites of passage. But the fun and excitement always carries some risk, and the death of University of Virginia student Hannah Graham is a stark reminder of the vulnerability of college students spending their first few years away from home.

Sunday marks the one-year anniversary of Graham’s disappearance, which led to weeks of searching that garnered national attention. The search galvanized the community as thousands of people volunteered to comb the area for any sign of the 18-year-old second-year student.

That search ended Oct. 18, when officials found Graham’s remains at an abandoned farm in Albemarle County. By then, police already had arrested a suspect in her abduction, Jesse Leroy Matthew Jr. Matthew was later charged with capital murder in the case.

John and Sue Graham, Hannah’s parents, began a long period of grieving, which they have spent mostly in private.

“Although we have lost our precious Hannah, the light she radiated can never be extinguished,” they said in a statement released after their daughter’s remains were identified. “We will hold it in our hearts forever and it will help sustain us as we face a painful future without her.”

On Sunday, community members will hold a memorial event for Graham on the Downtown Mall. The event, titled “Chalk the Wall,” will bring volunteers together to draw a mural dedicated to Graham on the Freedom of Speech Wall outside City Hall.

The organizers include Gil Harrington, whose daughter Morgan went missing in 2009 while attending a concert at the John Paul Jones Arena and whose remains were found in early 2010.

No one has been charged in the death of Harrington, a 20-year-old Virginia Tech student, but forensic tests by state police have established a possible link to Matthew.

Since his arrest last year in the Graham case, Matthew was convicted in a separate sexual assault, which occurred in 2005 in Fairfax.

Gil Harrington said she has not been in contact with the Grahams and does not expect them to be at Sunday’s event. But she said she wanted to orchestrate a community-wide gesture to commemorate Hannah Graham’s disappearance.

“These crimes reverberate with the families and there’s also anguish in the community,” Harrington said. “I think there’s a salve on the wound as part of acknowledging the anniversary date.”

Graham’s death brought on changes in state law and in the UVa community.

First, the General Assembly expanded the use of the state DNA database to include a broader range of misdemeanors.

“Serial predators almost always have misdemeanor offenses on their record before they go on to commit these heinous crimes,” Albemarle County Sheriff J.E. "Chip" Harding, who advocated for the expanded DNA database, said in January.

Graham was last seen on the Downtown Mall after being separated from her friends.

She was last seen with Matthew, who had reportedly acted aggressively toward two other women earlier that night, picking them up and throwing them over his shoulder. Graham and Matthew were captured on video surveillance footage together, and in the aftermath, many people wondered why no one intervened in what seemed like a risky situation.

Since then, the university has taken precautionary measures in two areas. First, it’s beefing up security in the areas surrounding Grounds, including a new police substation on The Corner, increased police patrols and a staff of security guards to supplement those patrols.

There’s also more training in situational awareness for new students, said President Teresa A. Sullivan. In the past, UVa has tried to teach students these skills — using strength in numbers, recognizing when someone is in a dangerous situation and intervening tactfully — at orientation for new students.

But this year, Sullivan said, the administration is trying to drive home the message with more training and an aggressive public relations campaign.

“You can’t give students the information just once,” Sullivan said in an interview last month. “In the past, we relied too much on orientation.”

While the community tries to learn what it can from these killings, the families are left to deal with the loss of their loved ones.

Gil Harrington and Trina Murphy — whose niece Alexis was murdered in 2013 in a similar case — have remained outspoken, reminding the public of the risks and advocating for change.

The Grahams mostly have kept to themselves, although they were in Charlottesville in May to announce the creation of a scholarship in Hannah’s honor.

Although they grieve in different ways, Harrington said she’s familiar with their pain.

“The loss of a child is like a severing — it’s like having a limb ripped from you,” she said. “You can accommodate … but every single day you are aware that limb is gone. It’s constant.”

Derek Quizon is a reporter for The Daily Progress. Contact him at (434) 978-7265, dquizon@dailyprogress.com or @DPHigherEd on Twitter.

Jesse L. Matthew Sr. was charged with indecent exposure in 2010. The charge was described incorrectly in an article Sept. 13 on Page A1. This story was updated Sept. 24.

A hearing on Jesse Leroy Matthew, Jr.’s first-degree murder indictment in the death of Morgan Harrington has been delayed.

Volunteers walk along the railroad tracks behind the Charlottesville Downtown mall looking for clues during a massive search effort by the community for missing UVa student Hannah Graham Saturday in Charlottesville, Va. Photo/The Daily Progress/Andrew Shurtleff