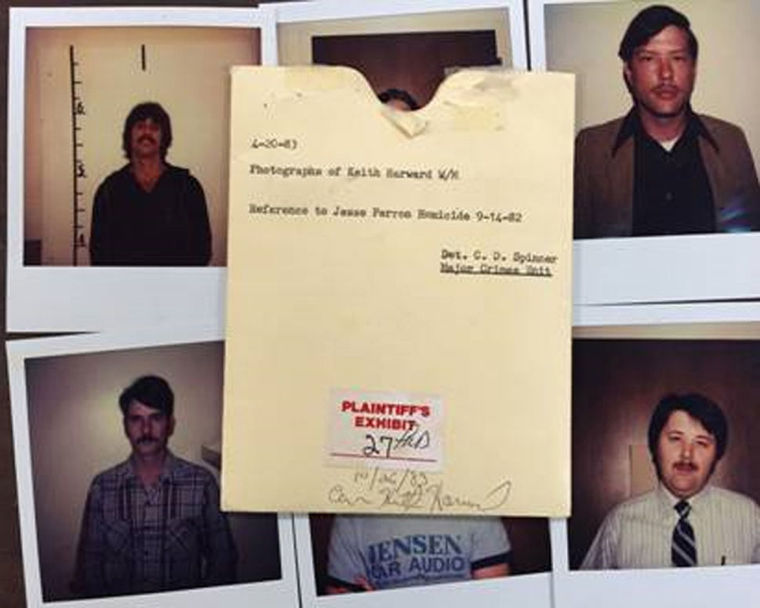 These are photographs from the Newport News trial of Keith Allen Harward, with Harward shown in the top-right photo in the photo array. 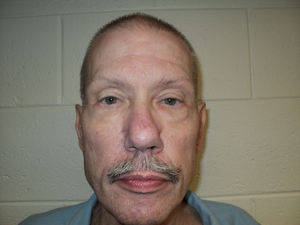 DNA implicates a career criminal in the rape of a Newport News woman and the murder of her husband more than three decades ago and conclusively proves the innocence of his former Navy shipmate, Keith Allen Harward, wrongly convicted of the crimes, according to the imprisoned man’s lawyers. 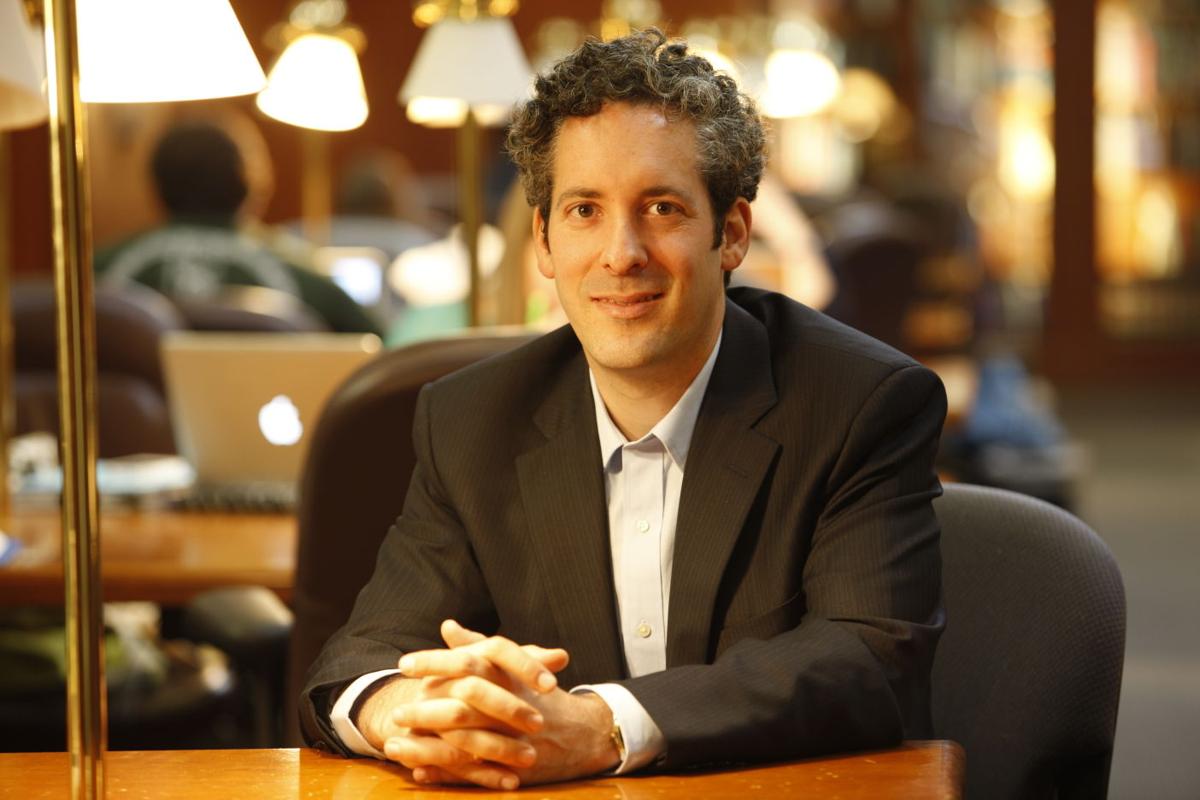 In 2009, University of Virginia law professor Brandon L. Garrett was poring over old trial records, looking for questionable forensic science evidence, when he came across the case of Keith Allen Harward, convicted of rape and murder in Newport News in 1986.

Now, the Innocence Project says recent DNA testing proves Harward didn’t commit the brutal 1982 crimes, casting further doubt on the validity of bite-mark comparison — a forensic technique that two experts testified strongly linked Harward to the crimes. It was their testimony that drew Garrett’s attention and concern in 2009.

At the time, he was researching a law review article, “Invalid Forensic Science Testimony and Wrongful Convictions,” when he began looking into non-innocence cases, as well.

“Sure enough, I found forensic testimony that had all the same problems that I saw in the innocent people’s cases … and I found two bite-mark cases by accident, one of which was Harward,” he said.

Reached by telephone at his Roanoke-area home last week, Dr. Alvin G. Kagey, one of the bite-mark experts, called forensic odontologists, who testified in Harward’s trial, said it is possible Harward is innocent, but he stands by his work in the case.

“In my opinion, this was a very unique situation. At that time, bite-mark analysis was new, relatively, and there was a lot of publicity about it in the Tidewater area, and I think that people were taking it and adding maybe some of their own twists to it — not that they changed what we said — but their interpretation made it sound like this was set in concrete, and it’s just not,” Kagey said.

According to Kagey, “I never say about a bite mark, ‘He or she is the only person that could have done this.’”

Garrett, after reviewing the trial transcript, is not persuaded the bite-mark testimony was valid and said that when he learned a petition for a writ of actual innocence was filed by Harward earlier this month, “It was really, really, really disturbing to think you can just come across innocent people’s cases by accident like that.”

Harward, 59, has not been exonerated. Lawyers with the Innocence Project and the Washington law firm of Skadden, Arps, Slate, Meagher & Flom LLP filed the innocence petition on March 4.

Proceedings have been stayed by the Virginia Supreme Court so that more DNA test results — said by Harward’s lawyers to further support innocence — can be submitted to the court.

Harward, in prison for 33 years, was convicted of the Sept. 14, 1982, slaying of Jesse Perron, a shipyard worker beaten to death with a crowbar by a man who then repeatedly sexually assaulted Perron’s wife and inflicted bite marks on her leg.

Though they were together for hours, the house was unlit and the rape victim could not identify Harward as her assailant.

His lawyers say key evidence against the former Navy sailor in his 1986 trial was testimony from forensic odontologists who they say concluded Harward’s teeth left the bite marks on the rape victim.

Harward’s lawyers and Garrett believe the experts’ conclusions went beyond the kind now sanctioned by the American Board of Forensic Odontology, which certified the two experts.

In 2009, the same year Garrett was researching his law review article with co-author Peter Neufeld, one of the founders of the Innocence Project, a committee of the National Academy of Sciences found no scientific basis for bite-mark comparisons to be used to identify someone to the exclusion of all others.

After the 2009 academy report, the American Board of Forensic Odontology changed its standards, which now state that: “terms such as unconditional identification of a perpetrator, or identification ‘without doubt’ are not sanctioned as final conclusions in an open population case.” The standards also call for terminology that uses a “lesser degree of specificity than unique.”

The transcript of Harward’s trial shows that Kagey and Dr. Lowell J. Levine, another forensic odontologist, were the last two witnesses called by the prosecutor, and they testified at length.

They said they look for similarities that could implicate suspects or differences that could clear them. They testified about similarities between Harward’s teeth and the bite marks on the victim and that there were no discrepancies that could have ruled Harward out as the biter.

At one point, Kagey, referring to a particular tooth mark, testified, “So we’ve got something that is unique there. How is it unique? It is uniquely rotated.”

Later in his testimony, when asked for his conclusion and referring to models of Harward’s teeth, Kagey said, “My conclusion would be that with all medical certainty, I feel that the teeth represented by these models were the teeth that made these bite marks.”

“There are no differences?” asked Willard M. Robinson Jr., then the Newport News commonwealth’s attorney.

The trial transcript shows that Kagey was asked by Robinson to explain “reasonable medical certainty.”

“I don’t know what all of the teeth in the world look like, one to another. But we know from reading and studying that we’ve never had two people who have had the same teeth marks or same alignment of teeth, much less getting into the individualized characteristics within a tooth. So with that knowledge, we realized that from a practical standpoint, all medical certainty means that there is just not anyone else that would have this unique dentition,” Kagey said.

Shown his testimony, Kagey said it may be interpreted by some that he was excluding all others as the biter. “But that would not be my interpretation,” he said. “I could never say that this person did it, to the exclusion of everyone else.”

“It does not take but one inconsistency that you cannot explain to rule someone out, and we’ve run into that,” but not in Harward’s case. “You know, you can’t say, ‘absolutely,’ and I never have. It may have been interpreted that way, but that’s not what I said,” Kagey said.

He said odontologists frequently were questioned by lawyers about medical certainty, “And then they want you to quantify it. Well, I don’t know how you quantify something like that. But I felt like it was a good case. By that, I mean the conclusion was a reasonable conclusion based on what I saw.”

“I have a great deal of respect for DNA,” Kagey said. He said it is possible the wrong man was convicted in the case. But he said his testimony was just part of the overall case against Harward.

“I do think that bite marks can be a valuable tool. But it has to have its place along with other things,” he said.

The transcript shows the other bite-mark expert, Levine, testified ahead of Kagey and explained to the jury there were three possible outcomes when odontologists compare bite marks and teeth. A suspect can be ruled out, or it might be decided the marks and the teeth are consistent and a suspect cannot be ruled out as the biter.

The prosecutor asked Levine, “Based on all those individual and distinct characteristics, and your evaluation of the teeth of Mr. Harward, and the bite marks on [the victim’s] leg, what is your opinion, Dr. Levine?”

“That with reasonable scientific certainty, Mr. Harward caused the bite marks on the leg.”

“No discrepancies?” he was asked.

“No, sir. It’s a practical impossibility that someone else would have all these characteristics in combination,” he said.

On cross-examination, Harward’s trial lawyer pointed to what appeared to be a noticeable gap between teeth indicating an inconsistency between a bite mark and Harward’s teeth. Levine dismissed it: “What you’re doing, you’re making an error that ... you know, what I call well-meaning amateurs make.”

“What I say, what we say as experts, is these two are not identical, and they’re never going to be identical, but what we say, they have a common origin, which are these teeth,” he said.

Levine, of New York, did not respond to voice mail requests for comment last week.

The trial transcript shows that in his closing argument, Robinson, the prosecutor, told the jury: “You’re talking about experts who tell you, within reasonable scientific certainty, the teeth that made these molds made the bite on [the victim’s] legs, doubt vanishes.”

The Harward case was one of nine Virginia non-exoneration rape and murder cases to which Garrett and Neufeld refer in their 2009 law review article, and the case is listed with others on the law school’s website.

Concerning Kagey and Levine’s testimony, Garrett said, “There was and is no scientific research to support making such aggressive claims about bite-mark evidence.” He said, “Not only are the conclusions overstated, but there’s no criteria for how you reach them.”

“Even apart from making unscientific and invalid claims, the technique of bite-mark comparison is quite unreliable. We have seen case after case of exonerations where the marks were not made by the convicted person and some where they were not even human bite marks but rather insect bites or bruises,” he said.

Garrett said he was not suggesting the odontologists were attempting to commit an injustice. “They were probably testifying the way they always testify,” Garrett said.

Harward’s innocence petition contends, “these forensic scientists … presented to the jury what appeared at the time to be conclusive evidence of my guilt, but modern objective scientific scrutiny has more recently shown that this evidence entirely lacks reliability.”

A spokeswoman for the Virginia Department of Forensic Science said that because the department does not conduct bite-mark analysis, the state’s Forensic Science Board has not taken a position on what is proper forensic odontology evidence.

Va. Attorney General says, "it is clear that Keith Harward is innocent."

These are photographs from the Newport News trial of Keith Allen Harward, with Harward shown in the top-right photo in the photo array.

DNA implicates a career criminal in the rape of a Newport News woman and the murder of her husband more than three decades ago and conclusively proves the innocence of his former Navy shipmate, Keith Allen Harward, wrongly convicted of the crimes, according to the imprisoned man’s lawyers.