According to a new national poll conducted in conjunction with the University of Virginia Center for Politics, approximately 60 percent of respondents think Confederate monuments should remain in public spaces. Only 26 percent agreed they should all be removed, but 82 percent agreed that all races are equal.

However, after reviewing the results of the recent Reuters/Ipsos poll that the Center for Politics helped to conduct, the center determined there are “troubling levels of support for certain racially charged ideas and attitudes frequently expressed” by extremist groups similar to those which came to Charlottesville last month for the Unite the Right rally, a center news release said.

“We worked with Reuters/Ipsos to develop questions and then to interpret the results, leading to some of the conclusions we reached in the release,” said Kyle Kondik, a Center for Politics spokesman and managing editor of Sabato’s Crystal Ball. Kondik said the center was invited to collaborate on the project following the Aug. 11 and 12 white nationalist events held at UVa and in downtown Charlottesville, respectively. 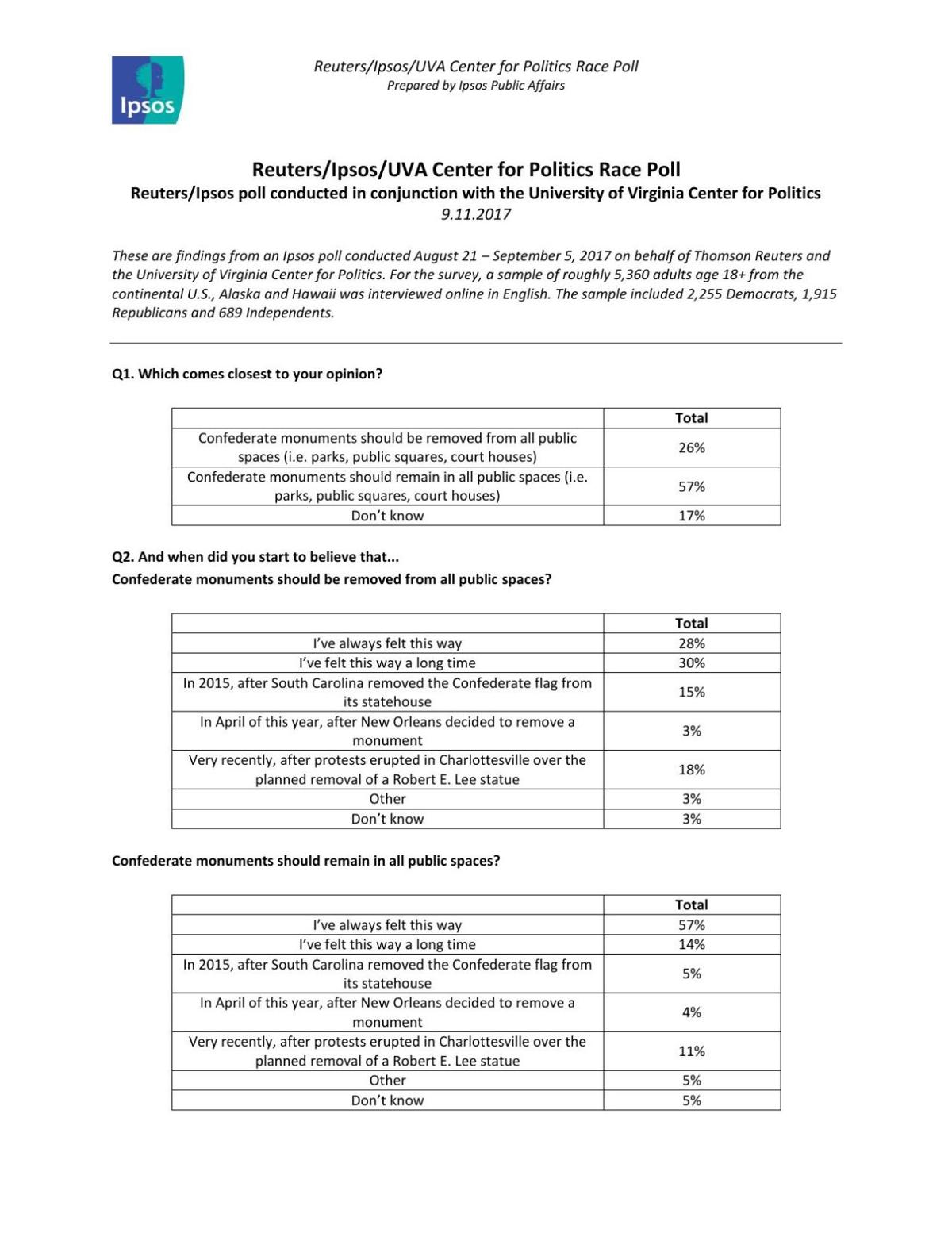 Approximately 5,360 people responded to the online survey between Aug. 21 and Sept. 5.

On public Confederate monuments, 81 percent of Republicans and 67 percent of whites said they are in favor of keeping such statues where they are.

Independent voters preferred keeping the monuments by a margin of 62 percent to 18 percent. A plurality of Democrats, 46 percent, favored removing the statue, with 38 percent saying they should stay.

Of the 26 percent favoring removal, 58 percent said they have always or for a long time felt that way, while 15 percent of them said they started thinking so after seeing the Confederate flag removed from South Carolina’s statehouse in 2015. Three percent said they were affected by the removal of Confederate monuments in New Orleans, while 18 percent said the violence in Charlottesville changed their minds.

The release said a “fundamental question” the pollsters and political analysts sought to answer is whether there is a sizable portion of the American public that could be receptive to the messages of groups supporting white supremacy and the so-called alt-right movement. White nationalists rallied around Charlottesville’s statue of Robert E. Lee last month after the City Council voted to remove it in February.

About a third of the respondents, 32 percent, said they are unfamiliar with Antifa, an anti-Fascist movement that has become more prominent nationally with its combative, sometimes violent, protests of white nationalist events throughout the country. About two-fifths, 39 percent, said they are opposed to the movement, while only 8 percent said they are in support of it.

“On the one hand, despite the events in Charlottesville and elsewhere, few people surveyed expressed direct support for hate groups,” the release said. “But on the other hand, it will be disturbing to many that a not insubstantial proportion of those polled demonstrated neutrality and indifference or, worse, expressed support for antiquated views on race.”

In total, about one in three respondents did not express support for interracial marriage. Sixteen percent agreed that marriage should be restricted between two people of the same race, while 14 percent of all respondents neither agreed nor disagreed with it.

“Notably,” the release said, 14 percent of respondents said whites are the only racial group that is “under attack” these days — 31 percent said they strongly or somewhat agree that the country needs to “protect and preserve its White European heritage.” (Ironically, “14” has significance to some white supremacists. The number is sometimes cited as a reference to the 14 words in the phrase, “We must secure the existence for our people and a future for white children.”)

Another third, 34 percent, said they disagree that the country needs to defend White European heritage, while 29 percent neither agreed nor disagreed.

According to the release, the number of people who chose to give a neutral answer rather than profess ignorance about the far-right extremist groups “seemed remarkable.”

The release said Ipsos pollster Julia Clark “discovered a general trend showing that these respondents were more likely to have views that leaned more toward intolerance than away from it.”

Clark said those who chose the “neither agree nor disagree” option were far less likely to condemn statements against interracial marriage and were in favor of preserving white heritage.

“In addition, the ‘neither/nors’ are notably less likely than other respondents to feel all races should be treated equally or that minorities are under attack,” Clark said. “In both cases, and others, this makes their viewpoints more congruous with extremist, anti-equality views than more progressive views.”

While there seems to be broad opposition to the far-right and racist extremist groups, there could still be a huge number of supporters for those movements and their ideologies, said Larry J. Sabato, director of the Center for Politics.

“Let’s remember,” Sabato said, “there are nearly 250 million adults in the United States, so even small percentages likely represent the beliefs of many millions of Americans.”

For the next two weeks, UVa students may not gather in groups of more than five people, must wear masks most of the time and are asked not to travel or invite outside guests to the university.

Judge finds rezoning did not create need for the service

A $3.5 million federal grant will allow the city of Charlottesville to bolster its diminished staff, but calls back a spat between the former fire chief and outgoing city manager.

“Movement between stages shouldn’t be a fraught, uncertain issue every quarter.”

The 5th Congressional District typically trends Republican, but this may be an unusual year in politics, too.

At its meeting Monday, the City Council extended the ordinance for the duration of its declaration of a local emergency.

‘This can be done’: Baker-Butler Elementary earns national recognition for closing achievement gaps

School staff say there's no secret sauce to closing gaps but hope other schools can learn from their hard work.

Car sideswiped one vehicle and struck another before crashing and the driving fleeing.