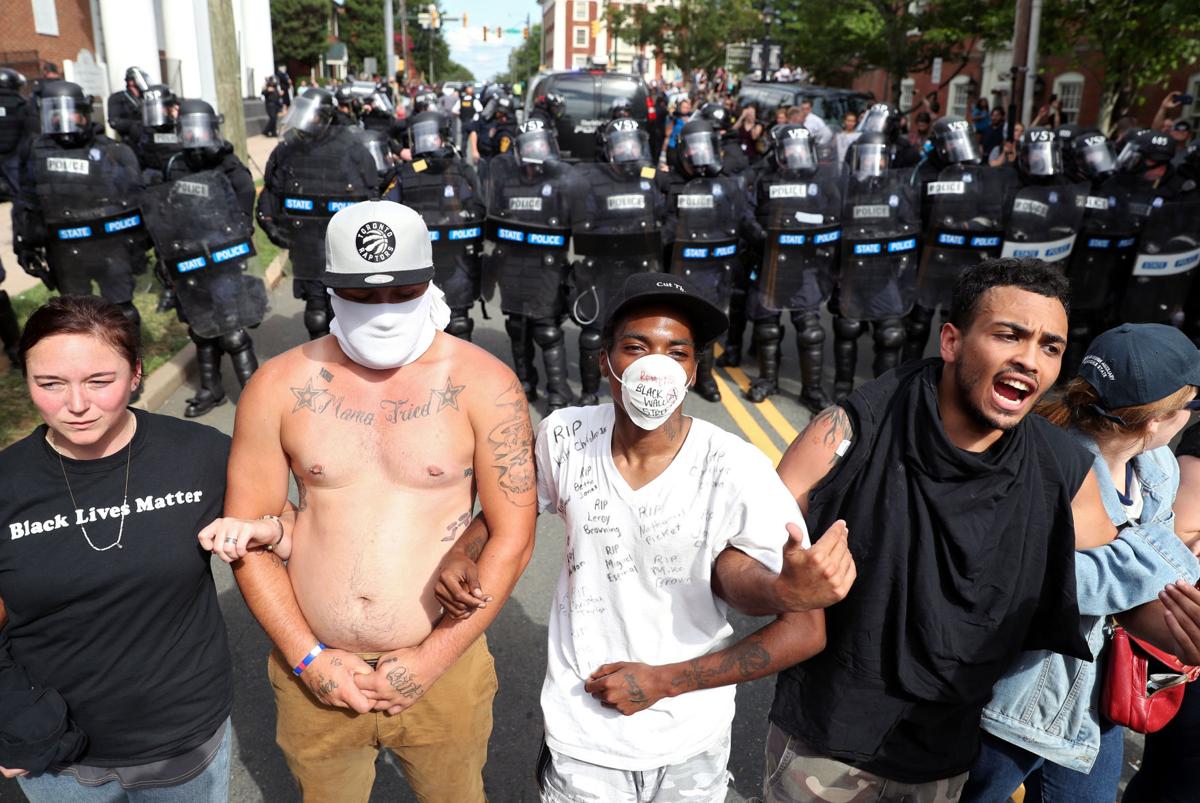 Protestors march as police try to move the crowd after a rally by the Loyal White Knights of the Ku Klux Klan at Justice Park in Charlottesville on Saturday, July 8, 2017. Photo/Ryan M. Kelly/The Daily Progress 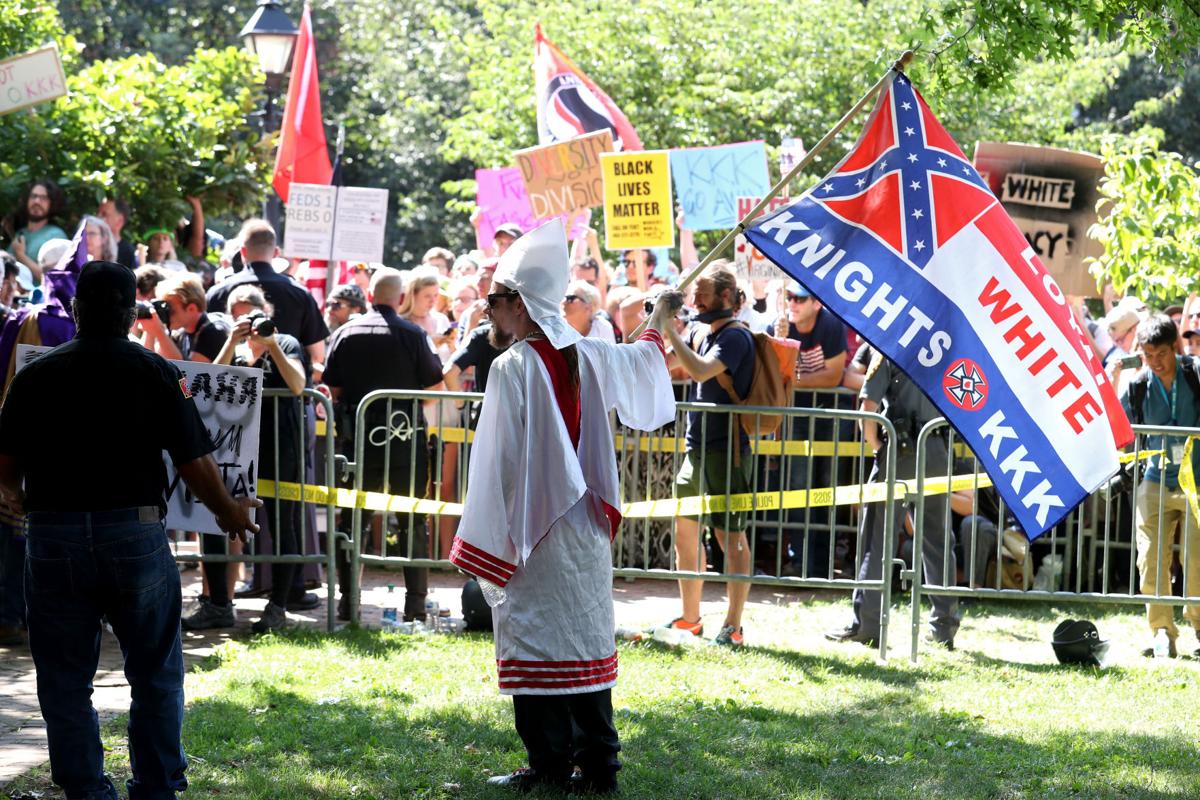 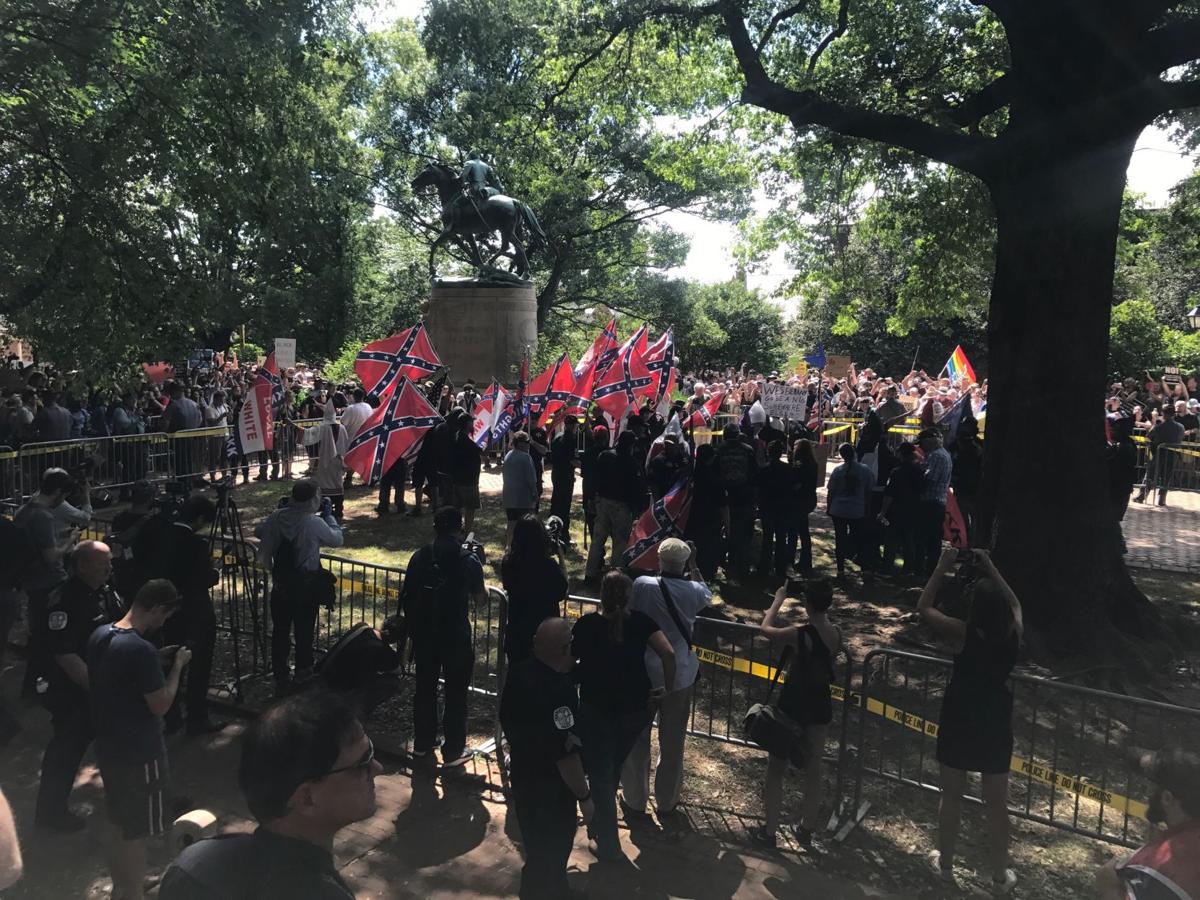 About 40 members of the Loyal White Knights of the Ku Klux Klan protest in Justice Park on Saturday, July 8, 2017.

A lawful assembly became an “unlawful assembly” on Saturday afternoon when approximately 50 Loyal White Knights of the Ku Klux Klan fulfilled their promise of descending upon Charlottesville in support of its Confederate statues.

For weeks, city officials urged residents to ignore the rally, but that call did not sway the more than 1,000 people who encircled Justice Park with chants, drum circles and signs vehemently condemning the North Carolina-based white supremacy group.

Their rally lasted only 45 minutes, but as the Klan members were escorted by city and state police to their vehicles, they were eclipsed by cohorts of anti-racist groups deriding the Klan and the police in equal measure.

By 4:40 p.m., police declared the scene on High Street an “unlawful assembly.” After two hours and three canisters of tear gas, authorities had arrested 23 people connected to the protest.

Since Friday, city authorities have been prepping the recently renamed Justice Park for the rally, which Klan members applied for back in May as a response to the city’s decision to remove the statues of Confederate Gen. Robert E. Lee from what was then named Lee Park. The decision put Charlottesville in the mix of a nationwide debate over the treatment of Confederate monuments and their racial implications in a modern historical context.

City Council’s February decision to remove the statue has been a lightning rod for right-wing politicians and pro-white groups from all over the state, who claim the city is overstepping its bounds by taking down elements of “Southern heritage.” Rallying under that ideology, the Klan applied for a 3 p.m. assembly beside the statue of Confederate Gen. Stonewall Jackson that was expected to bring more than 100 Klansmen; as expected, the number of protesters outpaced the roughly 50 who showed by the hundreds.

At 10 a.m. close to 200 officers from the Virginia State Police and local police departments gathered to go over the day’s operation.

Hours ahead of the rally’s start time — and not long after city workers had to clear a splash of red paint from the Lee statue — scores of members from Black Lives Matter, Charlottesville’s Showing Up for Racial Justice, Charlottesville Solidarity and other activist groups engulfed Justice Park, waving signs, singing chants and dancing in drum circles.

“When black lives are under attack, what do we do? Stand up, fight back!” one chant rang out.

The rally, well-publicized by local and national media alike, drew non-locals from both sides of the argument. Phil Wilayto, editor of the Richmond-based community newspaper The Virginia Defender, came to Charlottesville to support efforts to remove the Confederate statues and oppose the Klan’s presence.

“For 11 years, we’ve been calling for the Confederate statues of Monument Avenue to come down, so we’re out here today to show solidarity with the people of Charlottesville, support their struggle and Charlottesville’s struggle to take down the statues, and ask for their help in getting rid of the ones in Richmond,” Wilyato said.

On the other side of the fence, Brandy Fisher of West Virginia said she came to oppose the removal of the statues. She was quickly targeted in a barrage of arguments with anti-Klan protesters offended by her hat bearing the Confederate flag.

“I, apparently, am wearing a Confederate flag so they’re mad and calling me racist and calling me a Klan member when all I’m doing is protesting the removal of our historical statues,” Fisher said. “I feel like if we remove the statues, we’re going to make the same mistakes in the future. If you don’t look to your past, you’re going to screw up your future.”

Asked if she supported the Klan, Fisher said she “wouldn’t care who was holding the rally” so long as it was defending the Confederate monuments, but that she doesn’t agree with all of the Klan’s views “because they’re racist, and I’m not racist.”

“I don’t have a problem with black people, or Mexicans, or Israelis, or [Afghans] or Asians,” she said. “A person is a person, I take them each individually. I don’t agree with all the white people, either, because some of them are pretty damn ignorant.”

As the rally’s start time drew closer, the crowd thickened and tensions rose as thickets of protesters stationed themselves in and around the Klan’s expected entrance point. At 3 p.m., with the Klan still nowhere in sight, police had to pull a Crozet man, draped in the Confederate flag, from the protesting crowd.

Speaking to police outside of the crowd, Chris Dudley remained defiant in his opposition to the protest, stating that Gen. Jackson was a “hero,” and that “if it weren’t for him, none of y’all would be here.” Dudley said he and his girlfriend had come to the rally alone, but they were later spotted standing amongst the Klansmen.

It wasn’t until 3:45 p.m. that the Klan finally appeared; dozens of state police officers formed a two-sided human wall stretching across High Street, parting the sea of protesters for a troop of Klansmen dressed in black shirts or white robes, clutching Confederate flags and signs bearing their white-supremacist creeds.

As some raised their arms in Nazi salutes and others let out a chant of “white power,” the Klan group was met with a chorus of dissent from the crowd, who called for them to be removed from the park and the city. The Klan’s rebuttals were often drowned out by the protesters, with some using whistles and noisemakers to quell the Klan’s cries.

Asked why they decided to come to Charlottesville, Klan member James Moore again expressed a desire to retain symbols of white supremacy while deriding City Councilor Wes Bellamy, who came under scrutiny last fall when offensive tweets were unearthed from his Twitter page.

Bellamy was out of town, celebrating his one-year wedding anniversary.

Condemning the “Jewish press,” as well as President Donald Trump, whom Moore wrote off as “a puppet,” the eight-year Klansman said his group did not “hate anybody,” but rather identified as a “white separatist organization.”

By around 4:25 p.m., the cavalcade of Klansmen was escorted back out of the park and to their vehicles by police, drawing ire from the crowd of protesters, aghast that the authorities would be accommodating of such a radical group. High Street and its nearby side streets filled with hundreds who continued to rail against the Klan’s presence, alighting tensions with the state and city officers, several of whom had donned riot gear.

At 4:40 p.m., police declared the scene an “unlawful assembly” as officers continued to push the crowd back and allow the Klansmen to leave. Multiple reporters from The Daily Progress witnessed members of the crowd being brought to the ground by police and taken away in hand ties. At one point, a member of the crowd deployed a can of pepper spray, a city official said, and when a large crowd refused to leave High Street, a line of officers in riot gear donned gas masks and set off canisters of tear gas.

“They just started grabbing us, telling us to leave, and we couldn’t go anywhere,” said Sara Tansey, who was arrested on East High Street and said she was charged with misdemeanor obstruction of free passage of others. “They started grabbing us when we refused to leave.”

By 6:15 p.m., 23 people in total had been arrested, said a city spokeswoman, though she said she was unaware of the exact charges levied against the arrestees, or if they were still being detained. Three individuals had to be transported to the hospital: two for heat-related issues and one for an alcohol-related issue.

Speaking after the rally, former Blue Ribbon Commission Chairman Don Gathers said he was proud of the size of the protest but disappointed with the police’s behavior in the aftermath, calling it “unnecessary.”

“Now it’s just devolved into this. It’s truly sad. The police, I was so proud of them up until this point, and now this,” Gathers said. “They treated the Klan members one way: with respect. But then, the folks who came out to stand up to oppression, this is what you do to them? … Our citizens deserve better than this.”

The Charlottesville Police Department has not yet released a statement about the arrests or incidents that followed the protest.

In a statement posted to Facebook, Mayor Mike Signer wrote that the police “succeeded in executing their strategy of protecting the First Amendment and public safety” before and during the rally. He called the aftermath of the rally an “unfortunate event.”

“All in all, I believe that we came out of this difficult day stronger than before — more committed to diversity, to racial and social justice, to telling the truth about our history, and to unity,” Signer wrote. “On a very hot day, we made lemonade out of a lemon — from North Carolina, no less.”

Dean Seal is a reporter for The Daily Progress. Contact him at (434) 978-7268, dseal@dailyprogress.com or @JDeanSeal on Twitter. Daily Progress staff writer Chris Suarez contributed to this story.

Ten other people are facing misdemeanor charges; in total, 22 people were arrested Saturday.

Police have said tear gas was used after someone sprayed pepper gel on an officer. Activists say that's not true.

About 40 members of the Loyal White Knights of the Ku Klux Klan protest as Justice Park on July 8, 2017.

Counter protests and events ahead of Saturday KKK Rally

Charlottesville police said the paint, as well as black graffiti, was reported overnight. No arrests have been made.

Activists: Police use of tear gas excessive in clearing street

As the city deals with the aftermath of the Saturday KKK rally in Justice Park, anti-racism activists criticized police use of tear gas to break up protests.

Protestors march as police try to move the crowd after a rally by the Loyal White Knights of the Ku Klux Klan at Justice Park in Charlottesville on Saturday, July 8, 2017. Photo/Ryan M. Kelly/The Daily Progress

About 40 members of the Loyal White Knights of the Ku Klux Klan protest in Justice Park on Saturday, July 8, 2017.