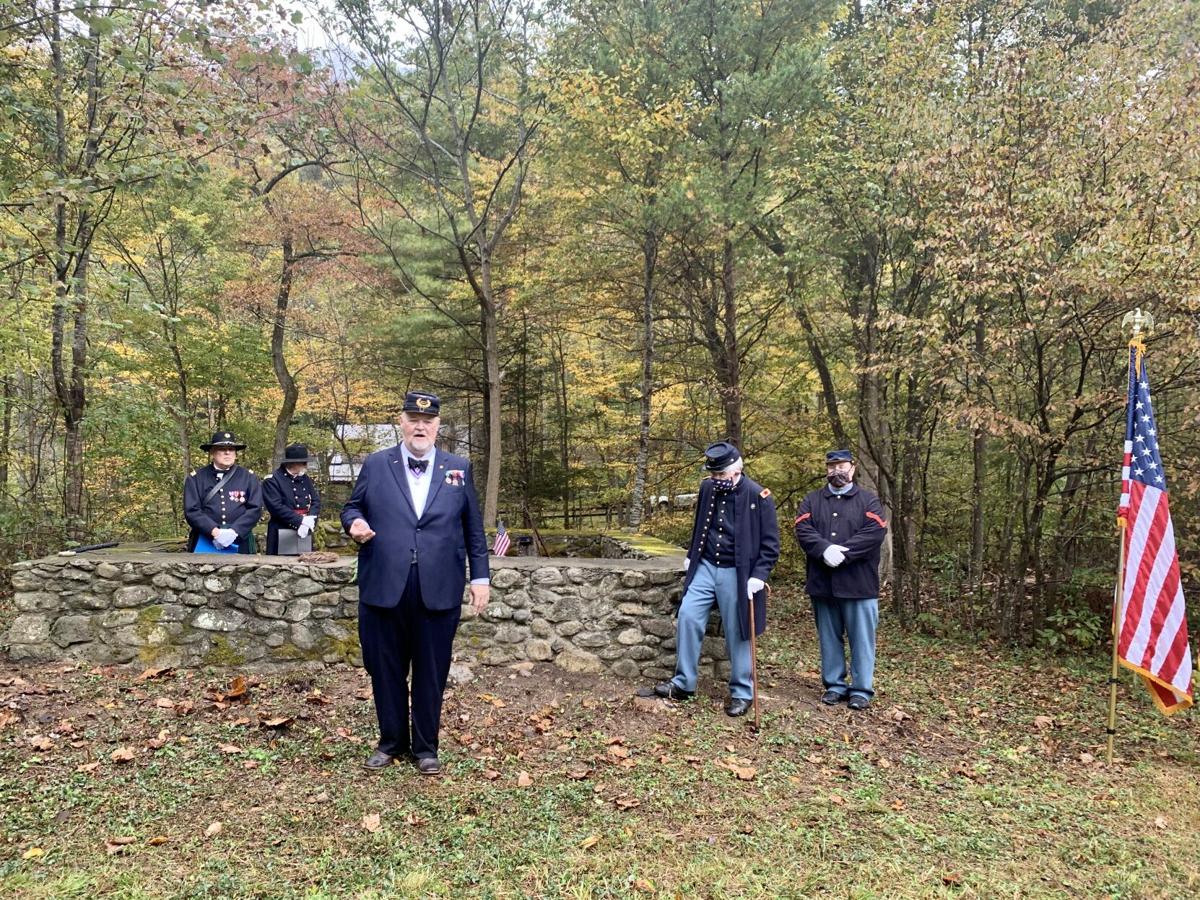 Jay Rarick with the Sons of Union Veterans of the Civil War speaks during the ceremony held for Pvt. Andrew Jackson Coffey on Oct. 10, 2020 in Nelson County 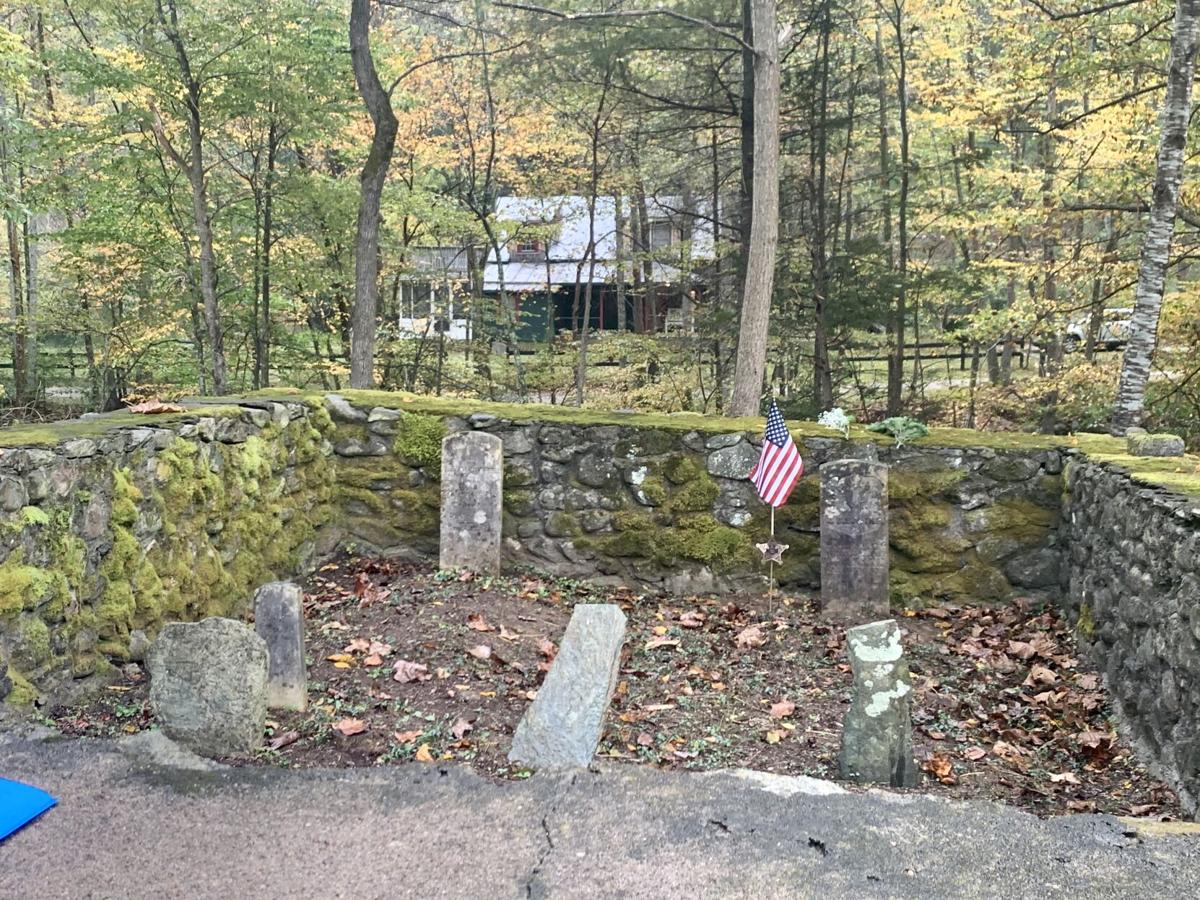 NASH — On Saturday, a group from the local Sons of Union Veterans of the Civil War honored the last Union soldier buried in Nelson County, Pvt. Andrew Jackson Coffey.

Coffey was born in the Nash area of Nelson County on Oct. 11, 1835 and according to research work done by Lynn Coffey, a local historian and Jay Rarick, commander of the Sons of Union Veterans of the Civil War, Department of the Chesapeake, Coffey married Rebecca Campbell and they had 10 children.

On Saturday morning Coffey was honored with a military ceremony, which he most likely never received upon his own burial in 1911, and a marker at his family cemetery in the Nash area of Nelson County.

The ceremony was conducted by the Taylor-Wilson Camp No. 10 of the Sons of Union Veterans of the Civil War. Also in attendance were representatives of the Rev. E. Clarence Purdue, Sr. American Legion Post 17 and Sons of the American Legion Squadron 17 from Lovingston.

The marker was provided and the ceremony conducted by the Sons of Union Veterans of the Civil War (SUVCW), a congressionally chartered hereditary and fraternal organization.

Created in 1881 and chartered by Congress in 1954, the SUVCW is the legal heir and representative of the Grand Army of the Republic (G.A.R.) which was the principle Union Veterans’ organization, the largest racially integrated organization of the late 19th and early 20th centuries and served as the organizational model for the VFW and American Legion.

Rarick said the SUVCW has a program that honors the last Union soldier buried in every county.

Betsy Coffey-Chaudet is a direct descendant of Pvt. Coffey by way of her grandfather, Charles Franklin Coffey.

“We’ve been learning more about Andrew Jackson Coffey as this is unfolding,” she said.

She said she is proud of him for fighting for the Union because of his faith.

Pvt. Coffey’s father was a pastor and as a young man, he was responsible for taking the slaves on a plantation in Charlottesville out in the morning and setting them up at their worksite, Coffey-Chaudet said.

Lynn Coffey, who co-authored an exhaustive document on Pvt. Coffey alongside Rarick and is a descendant of Coffey by way of marriage, said his family was very Christian and when he originally enlisted to fight it was with the Confederates but he deserted shortly after to go fight with the Union soldiers.

Rarick said Pvt. Coffey probably joined the local Confederate regiment out of peer pressure but after a few months, deserted and went north to join the 3rd Pennsylvania Heavy Artillery, a volunteer regiment.

He was stationed with them at Fortress Monroe down in Hampton Roads through most of the war.

In 1865 he was transferred out west to the Dakota Territory as it was known at the time and was stationed at Fort Sully where he was fighting against the Sioux Indians instead of the Confederates.

Later that year he was discharged and returned home and became a farmer. In the mid-1880s he received a soldier’s pension. After he died in 1911, his wife received a widow’s pension which gave his family $30 a month – equivalent to $800 today.

“He swore to preserve, protect and defend the Constitution of the United States against all enemies, foreign and domestic, and to hold true faith and allegiance to them and we honor that,” Rarick said.

The cemetery, which sits on the Coffey family farm that dates back to the early 1800s, has five graves in the graveyard which include Coffey and other family members. The grave markers sit in the middle of a plot surrounded by stone walls on four sides.

Lynn Coffey said she was thankful to those in the community who have been generous enough to share information and historical facts on Pvt. Coffey so she could help put a document together for the Nelson County Historical Society.

“I am really happy that this group has decided to honor one of the civil war soldiers from Nelson County and is not letting his memories die,” she said.

After two-decade effort, Crozet Tunnel opens to the public

The trail features a nearly one-mile long railroad tunnel designed by engineer Claudius Crozet and constructed by hundreds of Irish immigrants and enslaved African Americans over a period of 10 years shortly before the Civil War. Trailheads are accessible on both sides of the Blue Ridge Mountains.

Jay Rarick with the Sons of Union Veterans of the Civil War speaks during the ceremony held for Pvt. Andrew Jackson Coffey on Oct. 10, 2020 in Nelson County