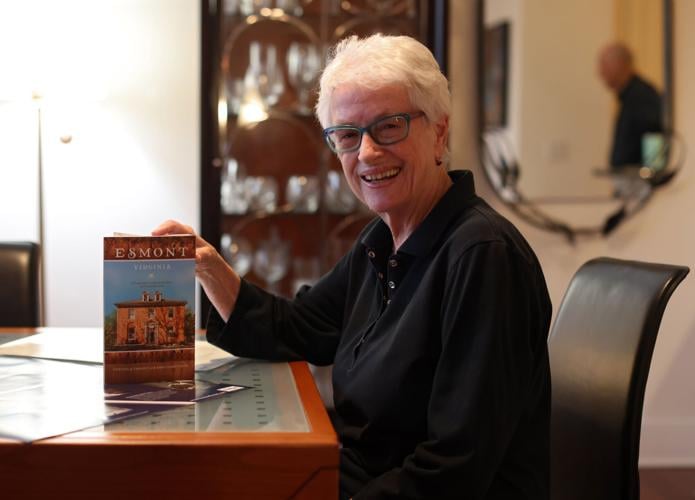 Peggy Purvis Denby poses with a copy of “Esmont, Virginia: A Community Carved from the Earth and Sustained by Story,” a new book on the history of the southern Albemarle County community. 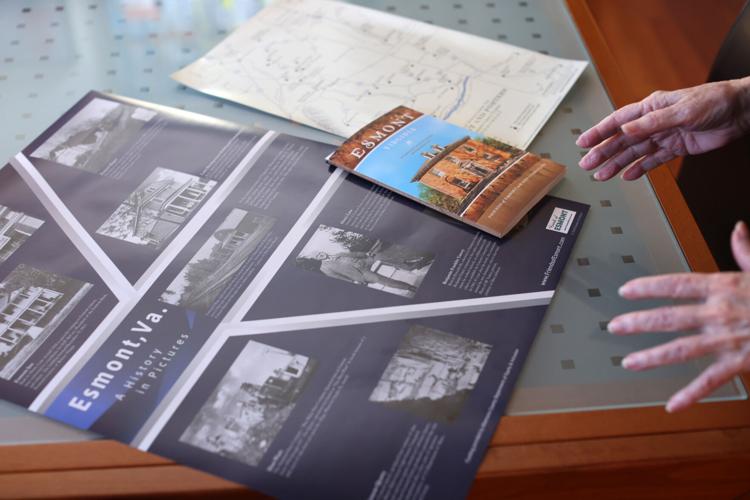 ANDREW SHURTLEFF, THE DAILY PROGRESS Peggy Purvis Denby poses with a new poster and book about the community of Esmont. 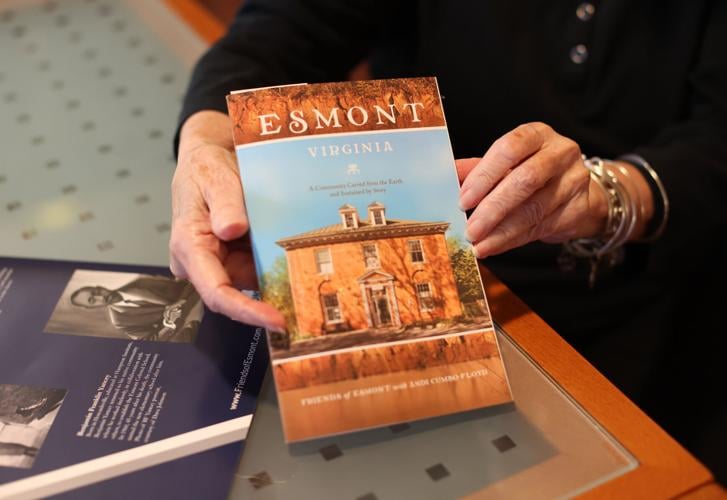 Peggy Purvis Denby holds a copy of a book about the community of Esmont.

A new book on history of Esmont, from its earliest beginnings through the industries that made it a thriving area, is now available.

Local nonprofit Friends of Esmont teamed up with historian and author Andi Cumbo-Floyd to publish “Esmont, Virginia: A Community Carved from the Earth and Sustained by Story.”

The approximately 100-page self-published book is one of the first collections of the history of the area in southern Albemarle County, beginning with the Monacan tribe, and outlining plantations, churches, schools and industries that made up the area.

While some of that history has been documented in other projects, such as the Race & Place Esmont Oral History Project, this is the first time a book has been dedicated to covering the past of the community.

Peggy Purvis Denby, chair of Friends of Esmont, said the revenue from the book will go back into the community through other projects the nonprofit is pursuing.

“There’s not a lot of stuff written about Esmont because it’s so small,” Denby said. “People started realizing what we were doing, and I would hear from folks from all around who had stories to tell or had something that their mother or grandmother had kept.”

Esmont is about 20 miles south of the city of Charlottesville, and saw its economic peak with soapstone and slate mills, but the boom ended when the need for the railroad lines ended.

Cumbo-Floyd, who grew up at Bremo Plantation in Fluvanna County, began doing research about the people who were enslaved there, and has worked on other projects about enslaved communities.

“That sort of extrapolates out well to a small town, like Esmont, where you can look for major families like the Coles and look at what properties they own, what people they enslave, and then what descendants of those enslaved communities are still there,” she said.

Purvis Denby, who grew up in Esmont, said she learned a lot from the research and writing of the book, including that John Lane, who went on to start Lane Furniture, and Henry Lane helped build the railroad in the area and helped found Esmont Village.

“I knew [the family], but I had no idea their family had done all that,” she said. “But I didn’t know the history, and I lived there for 20 years, and I don’t think anybody did. I never heard it discussed anywhere. My parents had a country store there for 50 years, and I thought we knew everything, so I was shocked and amazed, and very impressed.”

“I think that was enlightening and difficult,” she said. “I think it was hard for some folks to kind of be like, ‘We are not the center of this universe, like even in the Esmont world.’”

The book was funded in part by Preservation Piedmont, Virginia Humanities and the Caplin Foundation.

David Bearinger, senior director for grants and global Virginia programs at Virginia Humanities, said the project was compelling for the organization because it had never supported any grant that dealt explicitly with the history of Esmont.

“The opportunity for us to help communities like Esmont tell their own stories, that’s kind of why we exist, that’s a very important part of our work,” he said. “The project team was strong, the idea was compelling, the history was largely unknown outside of the community of Esmont and so this was a great opportunity on multiple levels for us.”

“At the point I couldn’t get to the courthouse and do research more, or I couldn’t really talk to anybody,” she said. “I just had this large group of people that I could say, ‘Does anybody have any information on Liberty Farm or Liberty Corner,’ and they often had screenshots of documents, or photos or documents to supplement what I didn’t already know.”

Purvis Denby said the Friends of Esmont also wants to buy and restore the Purvis Store, establish a wildlife refuge and memorialize Esmont Depot, among other projects.

Researching and writing the book was a rewarding experience, Cumbo-Floyd said, and also equally frustrating.

“There’s a lot to learn, but there’s also a lot that isn’t written down, that isn’t recorded somewhere,” she said. “The book is short, because there just isn’t a lot more that I knew existed at the time the book has come out.”

Cumbo-Floyd said there’s a value to the book being self-published, because if they find more information, the book can be updated and reissued.

“Hopefully, this book will be a little bit of a framework for people to get a general sense of history, and then they might say, ‘Oh, I have this box of papers in my attic, that talks about Liberty Corner, I wonder if anybody be interested in that,’ which would be great to have all that stuff come to light,” she said.

Peggy Purvis Denby poses with a copy of “Esmont, Virginia: A Community Carved from the Earth and Sustained by Story,” a new book on the history of the southern Albemarle County community.

ANDREW SHURTLEFF, THE DAILY PROGRESS Peggy Purvis Denby poses with a new poster and book about the community of Esmont.

Peggy Purvis Denby holds a copy of a book about the community of Esmont.