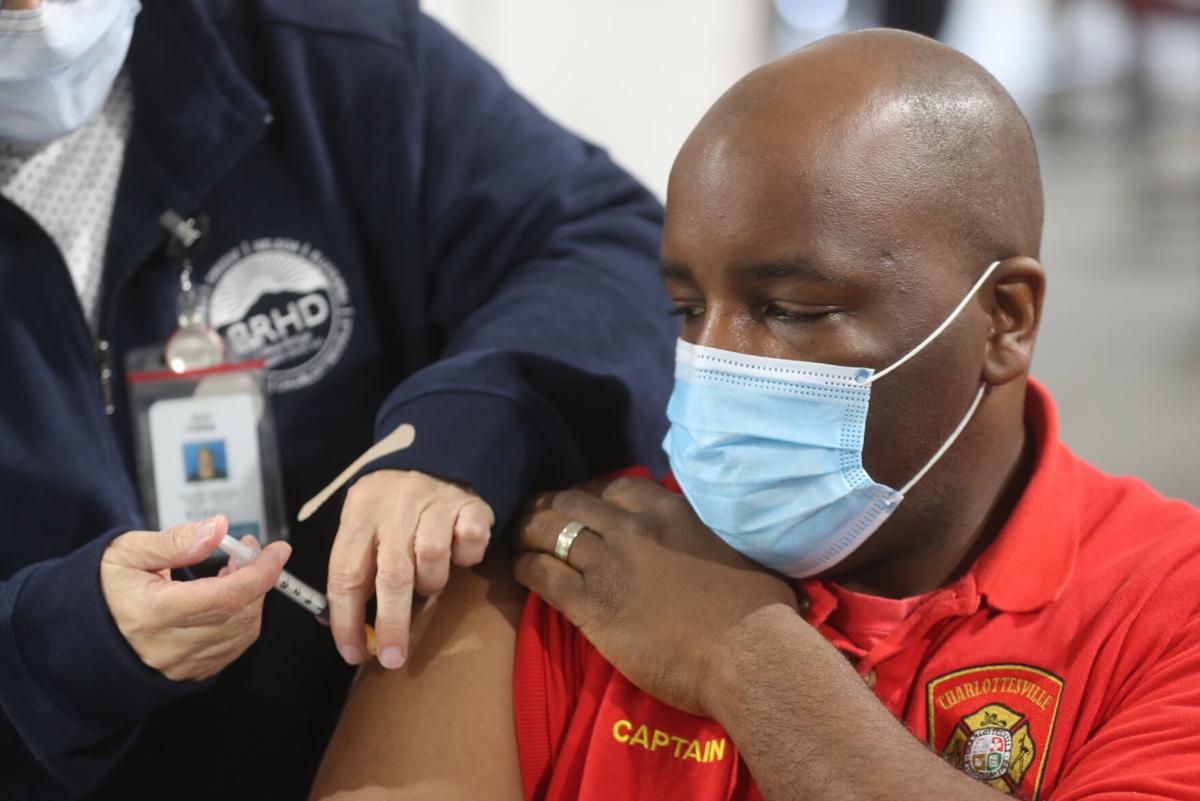 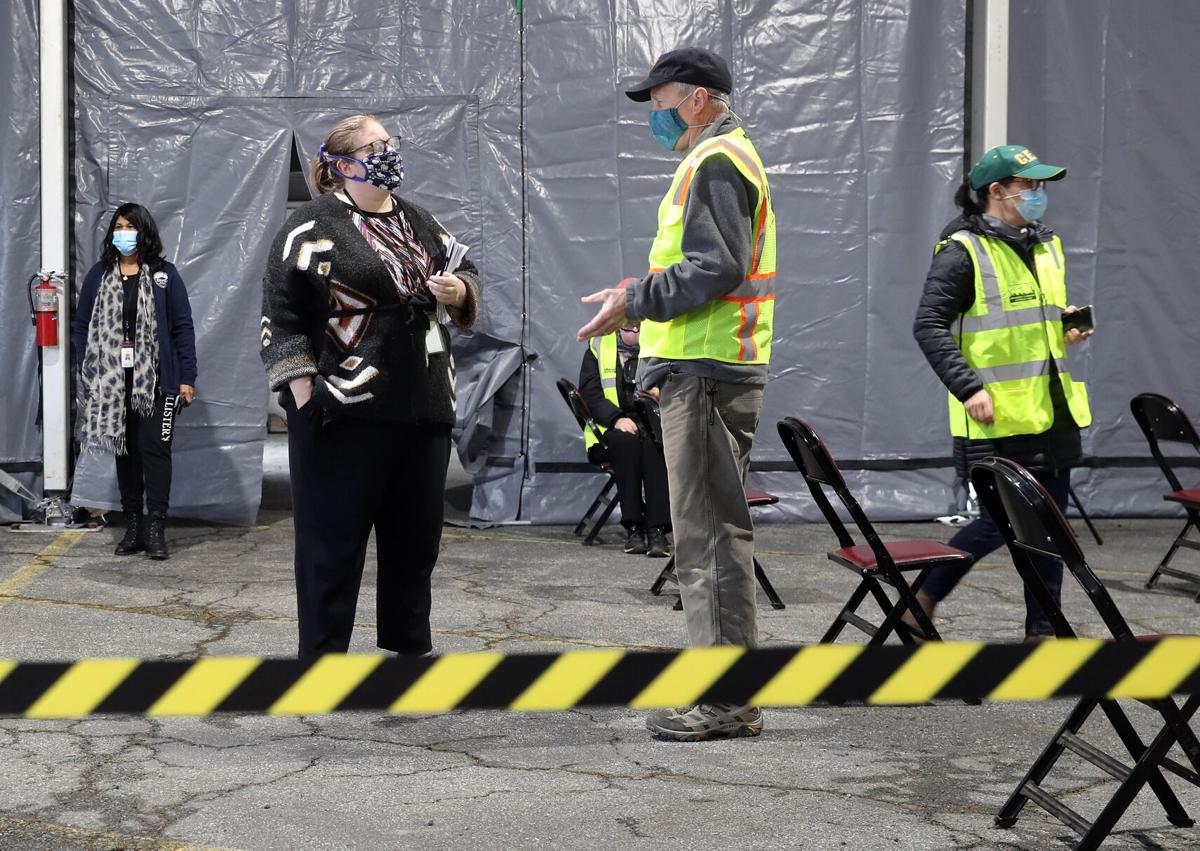 Workers with the Thomas Jefferson Health District prepare for an influx of vaccination participants at the new COVID-19 Vaccination Site in the former Kmart parking lot. 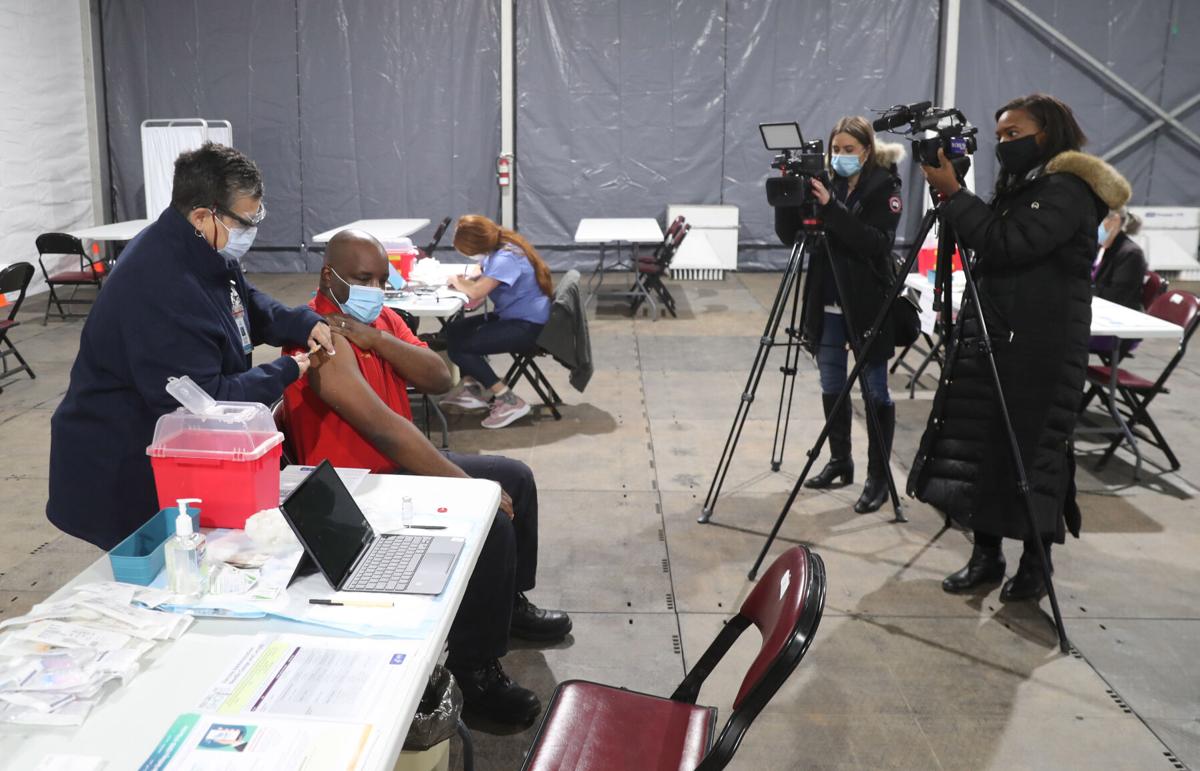 Lance Blakey, a captain with the Charlottesville Fire Department, said he felt great and more protected after receiving the first dose of Moderna’s COVID-19 vaccine Wednesday.

“We have a high volume of calls with the potential of people that have COVID-19, so just being the first round of being vaccinated I just feel that much more safe,” he said.

Blakey was the one of the first people to receive a shot in the Blue Ridge Health District’s new facility for vaccinations located in the former Kmart parking lot at the intersection of Hydraulic Road and U.S. 29. About 200 people were set to get shots Wednesday on the facility’s opening day, which marked the first day of mass vaccinations for individuals in the district who don’t work at area hospitals.

“I was a little nervous at first,” Blakey said. “But the lady that gave me the vaccine really eased my fears, so it went pretty well.”

Blakey said that as a Black man, he was nervous about the vaccine because of  the African American community's history with the medical community and being used in experiments. In 1932, Black men with syphilis were part of the Tuskegee Study in which they weren't told they were infected or given treatment for it.

“So what I did was I spoke with my wife and she kind of put me at ease, and then I've had some Zooms with doctors at the University of Virginia, which really helped my decision making,” Blakey said.

He encouraged everyone to research the vaccine. Getting the first shot Wednesday was the best decision for him and his family, he said.

The health district has continued to see high case numbers following a record month in December. On Wednesday, 193 new cases were reported, a new high, and the positivity rate is at 9.7%.

Vaccine appointments were open to EMS providers in Charlottesville and the counties of Albemarle, Fluvanna, Greene, Louisa and Nelson. After that group, non-hospital healthcare workers such as dialysis center staff and Region Ten Community Services Board residential facility staff will be up.

No vaccine doses are stored at the facility, which is under surveillance and open by appointment only. Appointments are set up through employers, not individually.

Jessica Coughlin, emergency manager for the health district, said they are getting the word out to eligible healthcare workers via social media and surveys. Employers have also contacted the health district and should continue to do so if they haven’t yet.

The Virginia Department of Health has determined who is in the first priority group, known as 1a. Those in the second group — 1b — are first responders, teachers, child care workers, those 75 years and older, and essential workers who work with the public, Gov. Ralph Northam said during a Wednesday press conference.

Included in 1a are long-term care facilities, but through a federal partnership, CVS and Walgreens are handling those vaccinations.

The state has administered about 24% of the vaccine doses it has received, according to a state dashboard. Northam told hospitals and health departments Wednesday to speed up the pace of vaccinations while announcing more details about the state’s plans to get more shots into people’s arms. Richmond and Henrico Health Director Danny Avula will lead the state’s COVID-19 vaccination effort.

The FDA authorized the Pfizer and Moderna vaccines for emergency use in December. Neither vaccine uses a live virus to inoculate recipients. Rather, they use mRNA to teach the body’s cells how to make harmless virtual proteins that will fight the virus.

Health district officials have said having a fixed location for vaccinations will help them give doses to people more efficiently. So far, 4,344 people in the district have received a dose of the vaccine. Both vaccines that have been approved require two doses in order to be most effective.

“We have big plans for this tent,” Coughlin said. “We are going to have this up and running as much as possible, at least three times a week. We're going to try to increase that to five or six times a week.”

She added that the district will have similar fixed locations in other localities starting next week.

The Kmart facility was established with the help of Red Light Management and the Bama Works Fund.

Inside the white four-walled tent, there’s space for registration and an area where people can wait after they receive a shot. A 15-minute waiting period is required to monitor people for any adverse reactions. Throughout the tent, there’s enough space for individuals to social distance.

Officials say people should be in and out within 30 minutes.

There are 18 vaccination stations, though the health district doesn’t have enough nurses to staff each one yet. Getting staff on board and trained is a key hurdle to boosting the number of doses the district can administer each day.

The hiring and training effort is underway.

The district requests doses on a weekly basis from the Virginia Department of Health’s central office. Coughlin said that she hasn’t had any issue acquiring the doses they need so far.

Updates on the local roll-out of the COVID-19 vaccine

The vaccine roll-out has confused and frustrated individuals. Bookmark bit.ly/localvax and check this page for updates.

Workers with the Thomas Jefferson Health District prepare for an influx of vaccination participants at the new COVID-19 Vaccination Site in the former Kmart parking lot.