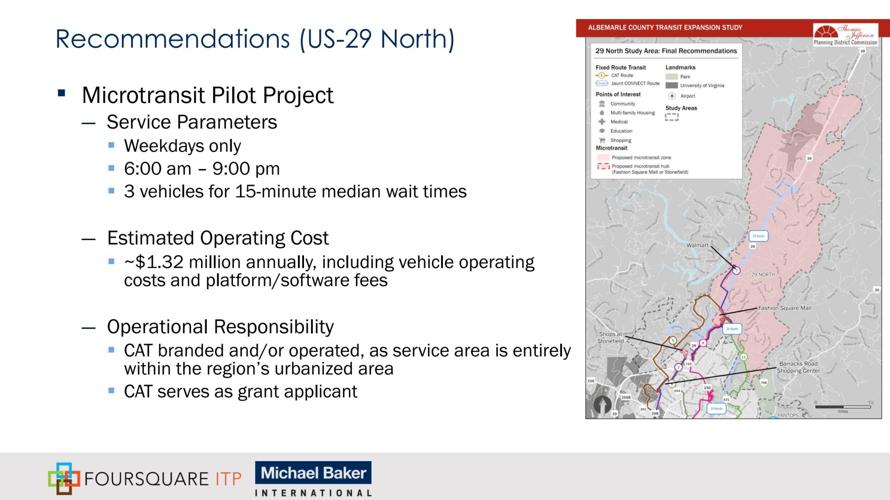 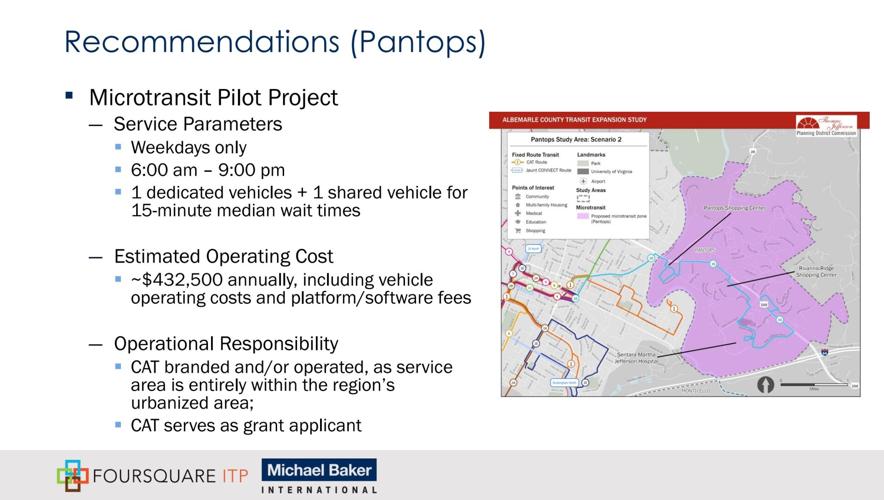 The Albemarle County Board of Supervisors has agreed to contribute $450,000 towards a possible micro transit demonstration grant for a pilot project through the Virginia Department of Rail and Public Transportation.

Micro transit is a phone app-based, demand-response service that doesn’t have a set route or series of bus stops. Providers typically use vans or specific vehicles for shared rides. The pilot projects were recommended from an Albemarle County Transit Expansion Feasibility Study and Implementation Plan.

If the grant is awarded, the pilot micro transit service could start as early as January 2023.

“We’re recommending that it would be an 18 month grant that would cover six months of advertising, vehicle acquisition and training, things like that, and then you can have 12 months of service,” said Nick Britton with consulting firm Michael Baker International.

After the pilot is complete, Britton said the cost to continue the service would be an estimated $1.75 million a year.

Supervisors were supportive of the pilot.

“Our community is really excited and eager for the on-demand model, I think,” Supervisor Diantha McKeel said. “We’ve been talking about this now for a long time, so this gets us started — we can see how to structure it, what we might do to change it.”

Charlottesville Area Transit will apply for the grant, and, if awarded, would provide the micro transit service either directly or by contracting the service to a third party.

Garland Williams, CAT’s director, said his agency is in the process of purchasing 25-seat vehicles that could be used for the project. He said they should be in the city by December.

A study recommended pilot programs in all three study areas — U.S. 29 North, Pantops and the area near and around Monticello — and the study team suggested the U.S. 29 North and Pantops area services would be competitive for state grant funding.

“We assumed that this would be a weekday only service operating from about 6 a.m. to 9 p.m. and three micro transit vehicles would need to be in use in order to ensure 15 minute or better wait times,” said Boris Palchik, with Foursquare ITP, one of the consultants who worked on the study.

Pantops, which would have service in the development area, was also recommended to provide weekday only service with one vehicle in the area regularly and possibly sharing a vehicle with the other service area.

When it comes to the Monticello area, it was recommended that it be tied into a larger micro transit zone that includes the neighborhoods south of Interstate 64.

“However, it would require two vehicles to serve this area, and there aren’t currently two vehicles that are available and programmed for micro transit service,” Palchik said. “This would need to be a longer term recommendation.”

He said CAT was asked to run the services because they would be provided in the region’s urbanized area.

“It seemed most appropriate for CAT to be the operator and the grant applicant given that it’s within the urbanized area, which is traditionally CAT’s service area,” Palchik said.

The study and plan were focused on county transit and what could be done immediately said Jessica Hersh-Ballering, the county’s principal planner for transportation. There is also a longer Regional Transit Vision Plan study ongoing.

The county board agreed to provide $30,000 for a study to look at how to manage the area’s transit operations.

Consultants have already started to consider recommendations for a regional authority, which could collect additional revenue in support of regional transit planning and services.

“It should be noted that a regional transit authority will be among the best and funding structures evaluated by this study, but it won’t be the only governance structure considered,” Hersh-Ballering said.

“We could go on forever with the regional transit partnership and keep doing what we’re doing, but if we really want to move transit forward in our community this is the next step,” McKeel said.

Proposal would diversify buses and riders.

Transit planning consultants trying to develop a vision for the future transit in the Charlottesville region is seeking public input, after re…

Albemarle County-area residents can now give feedback on possible recommendations to expand transit service in certain areas of the county, in…