Lower caseloads than projected in local courts spurred a redesign of the spaces in a long-planned project to merge and renovate Albemarle County and Charlottesville’s courts.

Originally designed to have four sets of courts — one for the city, two county general district courts and a shell space for future courts operations — the building now will have two courtrooms and two hearing rooms, according to a Wednesday report to the Albemarle County Board of Supervisors.

An analysis of caseloads was done as part of a programming phase for a project to redevelop the Levy Opera House and build a new facility behind it to house the Albemarle commonwealth’s attorney offices and to serve as a co-located General District Court with the city and the county. Albemarle is also renovating its current courts complex to serve as the Albemarle County Circuit Court.

On Wednesday, the Albemarle Board of Supervisors heard from a contracted court programmer and planner that actual criminal, traffic and civil cases in the county district court in 2019 were down 61% compared with the projected value from prior courts-related studies, and 63% lower than projections for both the county and Charlottesville.

“Looking through our validation lens, we put the brakes on when we saw this,” said Kurt Schlauch, a senior consultant with Fentress Inc. “To us, this was a significant departure, it was a sustained trend and it really caused us to go back and collaborate with ourselves and eventually the stakeholders to ask what does this mean.”

Albemarle has been considering court facility options since 1999 and at least four studies have been completed on the matter.

The most recent round of negotiations between Charlottesville and the county began in January 2018, and in December of that year, the Board of Supervisors and the City Council announced the county courts would stay downtown.

Schlauch said these findings allowed the designer, Steve White with Fentress Architects, to focus on functional and technology efficiencies that judges and clerks said were important while programming the site.

“We end up with actually a sized building that’s very comparable to where we were thinking in 2017, but we have two large courtrooms and two hearing rooms in these ancillary spaces to create a more streamlined, more 21st century functional building than what was previously envisioned,” White said.

Schlauch said that according to a 2015 study, the benchmark for an additional judgeship was 25,000 case filings, and it was projected that Albemarle could reach that number by between 2020 and 2025. That study projected there would be around 43,300 filings in Albemarle General District Court in 2020, but in 2019, there were actually only 26,367 filings, according to the state.

“What it really does mean is that one full judgeship for that county caseload appears that it will be sufficient both in the short term, and at this juncture, even in the long term,” Schlauch said.

Currently, the 16th Judicial District has four judgeships that cover nine localities. Albemarle has one judge and Charlottesville has a judge that spends about 80% of his time in the city and 20% in Greene County.

When combining cases with Charlottesville, Schlauch said the actual case number for 2019 was 63% below projections.

“The one judgeship for Albemarle and the fractional judgeship at the moment for Charlottesville do not only address that caseload in a current context, but … it builds in some growth — we look at 1.9 to maybe 2.1 judgeships long-term,” he said.

There was a spike in civil and traffic cases in local general district courts between 2007 and 2012. Schlauch said traffic cases can fluctuate based on enforcement priorities, while higher case filing costs — and possibly fewer University of Virginia medical billing cases — have brought the number of civil cases down.

White said the two courtrooms, which would be on the second floor, are now proposed to be 400 square feet larger than initial studies recommended based on feedback from judges.

“The volume of traffic court is highly efficient if they can get as many people in the courtroom as possible, so we made the galleries considerably larger to deal with large volumes of people,” he said.

The design also added a “cattle chute” for people to exit through to make payments or sign up for support.

The first floor would house the clerk’s offices and two hearing rooms, which White called “a modern day phenomenon” where the functions of a courtroom can be created in a smaller space than a typical courtroom.

“In the hearing rooms, we’ll have the ability to have mediation, we’ll have the ability for the clerk to run some court functions where the judge is not needed,” White said. “Video arraignments can occur so that the judge could come down, take care of a half-dozen video arraignments while the bailiff is getting the court set up for traffic court, and then the judge takes the elevator upstairs, and off they go and the courtroom is ready to go. There’s no waiting.”

Even though the projections don’t call for it, he said the hearing rooms could become one courtroom in the future if needed.

In terms of the Albemarle Circuit Court, caseload actuals were relatively similar to projections from prior studies.

Currently, the 16th Judicial Circuit has six judgeships that cover nine localities. Albemarle has one judge, as well as a judge that spends about 40% of his time in the county, 40% in Greene and 20% in Charlottesville.

“Our perspective … the circuit court figures were tracking almost exactly the way that the prior research from 2012 indicated that they would, and where that left us was that 1.4 judgeships currently and potentially maybe seeing that second judgeship go full time over the long term,” Schlauch said.

The two buildings that now house both courts in the county will be focused on the circuit court, and a larger second courtroom will be located in the current general district clerk’s area.

White said that overall, the three main focuses of the circuit court renovation programming are that operation drives the design; the public, judges/staff and sheriffs/detainees have separate, safe and secure circulation; and that technology is modernized and flexible to allow for changes over time.

The second circuit courtroom is currently on the second floor of the historic courthouse building, and White said it’s an inaccessible space as there is no elevator.

“We would have a small service elevator to get folks up there, and right now we’ve considered it for jury assembly and we’ve also considered it for ancillary space for the clerks,” he said. “But right now it’s not very well suited for the services and needs of the court … the width of it is very narrow and it’s very difficult to get any detainees in that space.”

At Wednesday's meeting, the Board of Supervisors approved a basis of design for the project, and the county will now move into the schematic design phase.

Now comes word that Charlottesville and Albemarle court caseloads haven’t risen as much as predicted. 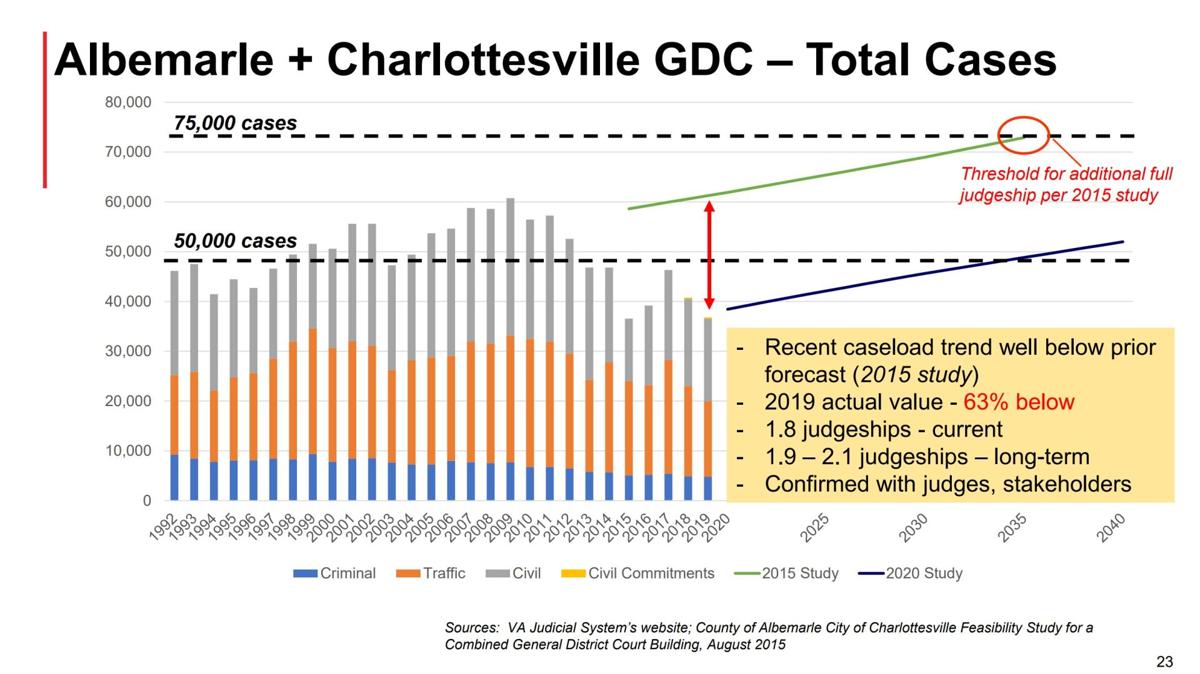 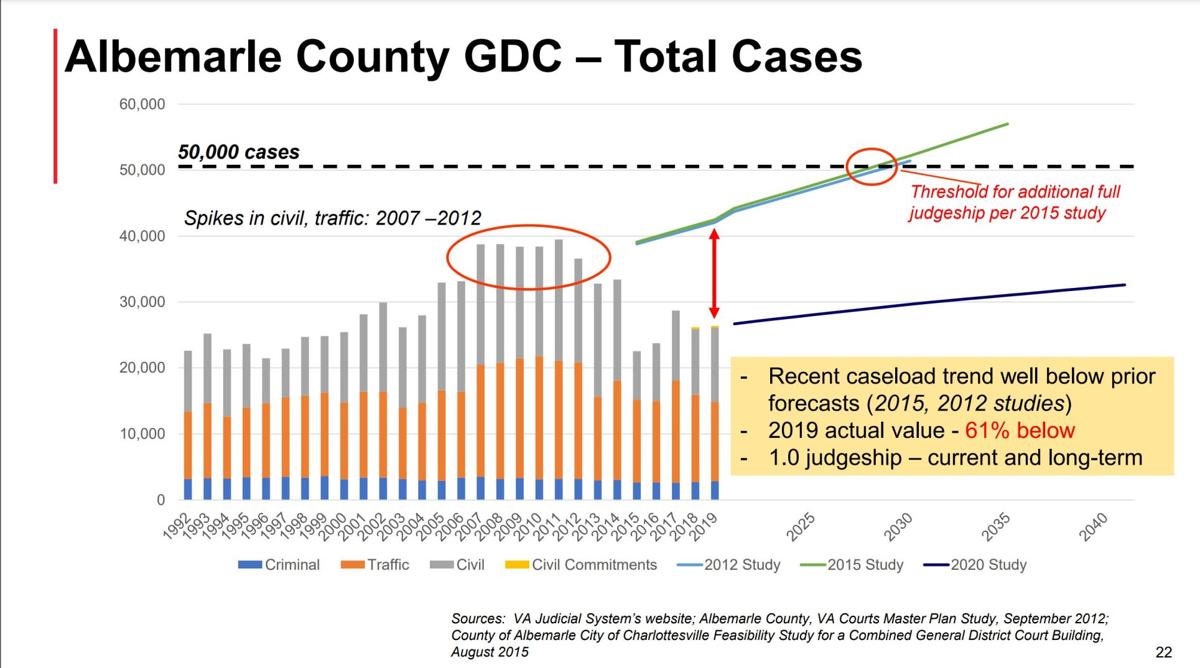 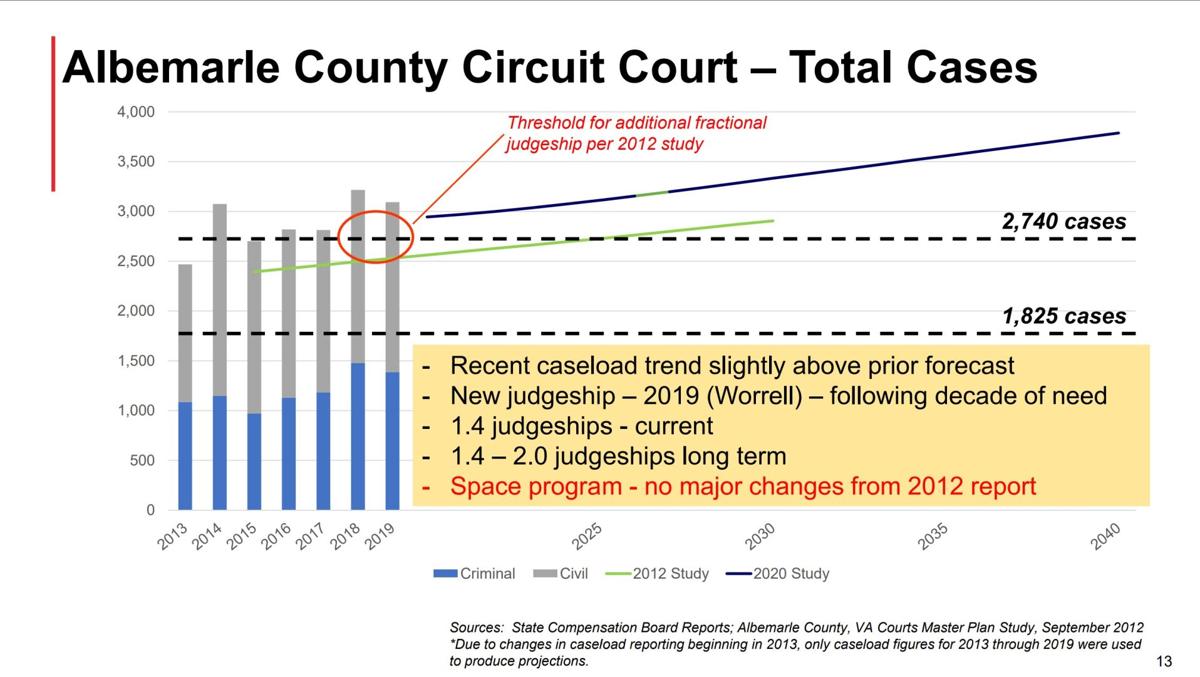