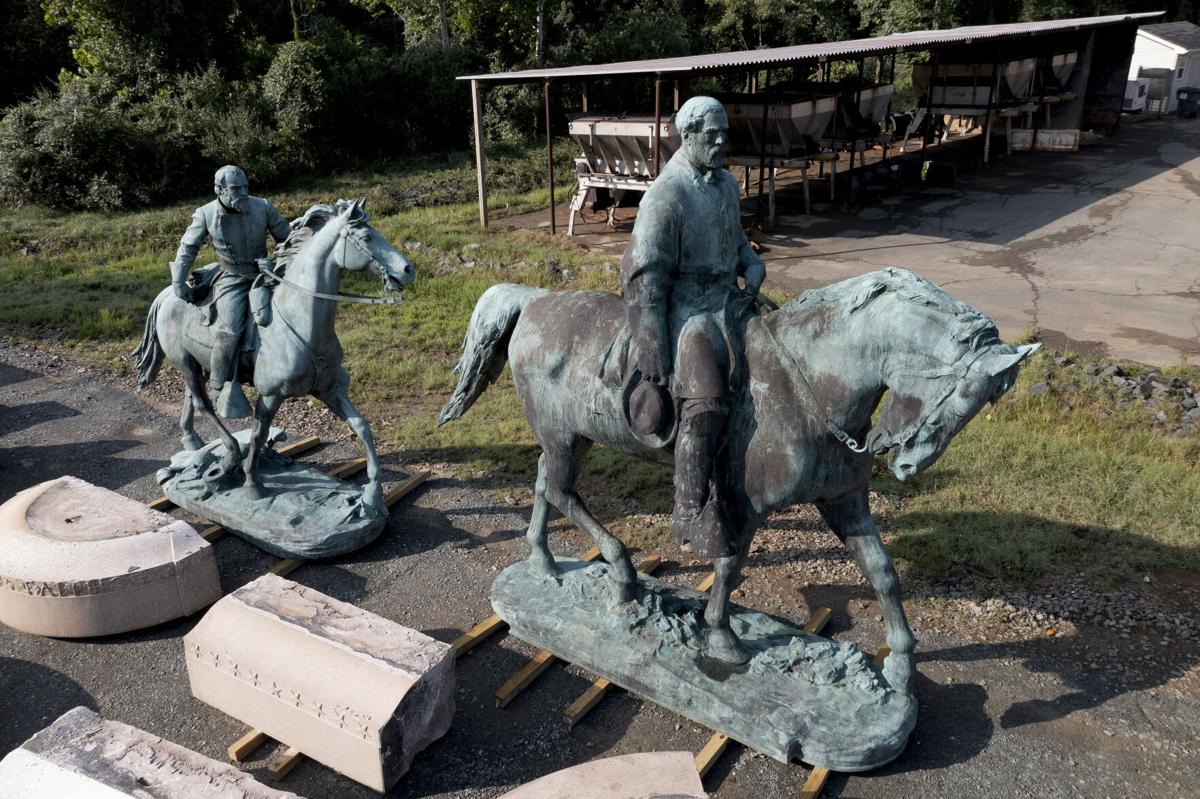 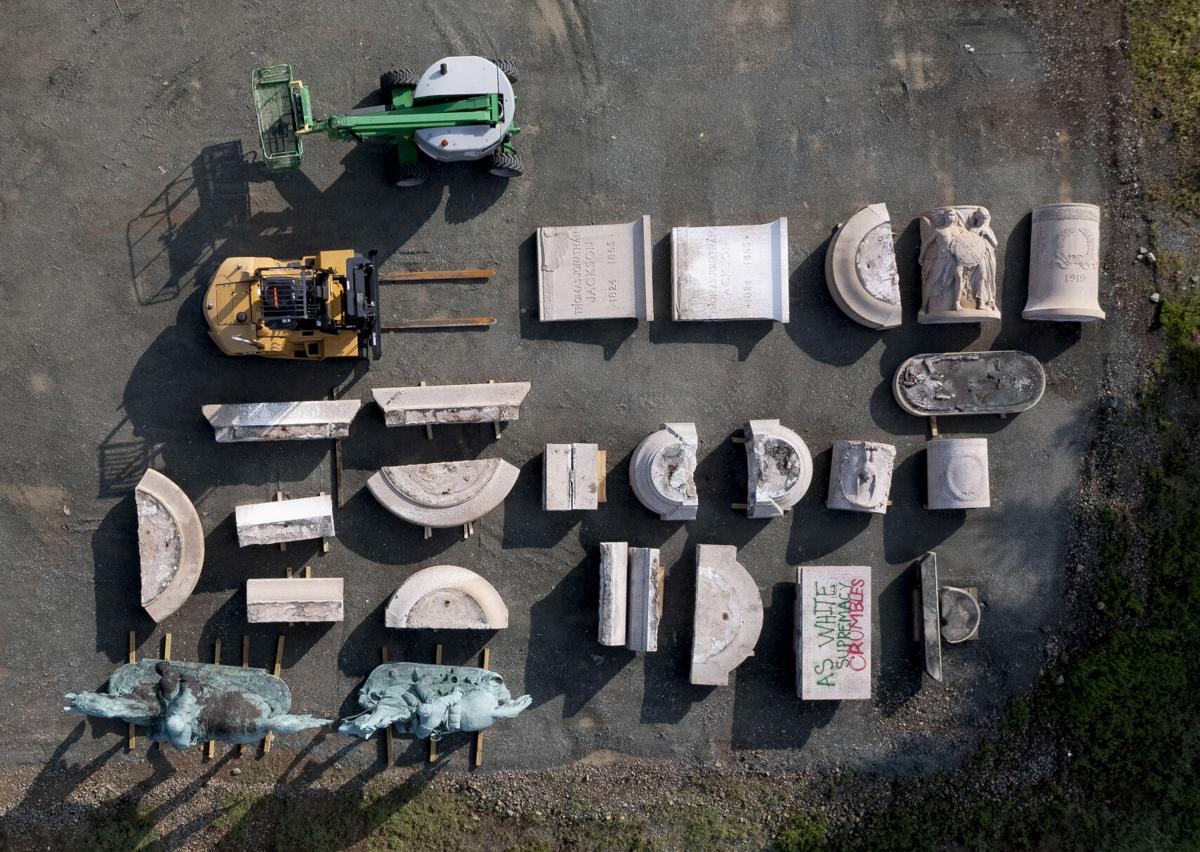 Since July, Charlottesville’s surrendered generals have been awaiting their fate in a storage facility off Avon Street.

Charlottesville’s nearly 100-year-old statue of Robert E. Lee will be melted and turned into a piece of public art, as the city faces a history of racial harm and aims now for a future of racial justice.

The initial decision to remove the statue sparked the deadly white supremacist Unite The Right rally in August 2017, where anti-racism activist Heather Heyer was killed and dozens of other counter-protesters were seriously injured.

The City Council made the historic vote just minutes after midnight, hours into a routine City Council meeting. The unanimous decision allows the city to donate the statue of the Confederate leader to the Jefferson School African American Heritage Center, a local Black history museum.

Now that the Charlottesville City Council has officially voted to donate the city’s statue of Robert E. Lee to the Jefferson School African Am…

The statue has been in a city storage facility since its removal on July 10. The city called for proposals on what to do with the statue in July and again in September. The Jefferson School submitted a proposal for the statue to be melted into ingots and transformed into a work of art that reflects the community’s values. The statue will then be gifted back to the city for public display. The process will include a comprehensive six-month community engagement process.

While the proposed removal of the statue in 2017 brought hundreds of torch-wielding white supremacists to Charlottesville in protest, only one person spoke against the Jefferson School proposal during the public comment period.

The Jefferson School’s proposal outlines a plan to melt down the Lee statue into ingots and use the bronze to create a new work of public art through an extensive community engagement process. This sculpture will then be gifted to the city for installation on public land. The Jefferson School’s proposal was the only local proposal for ownership of the Lee statue that the city received. City Council will decide the fates of the other two statues on Dec. 20, which will be Mayor Nikuyah Walker and councilor Heather Hill’s last meeting.

The council initially decided to table the vote due to Vice Mayor Sena Magill’s absence, which was due to a family emergency, and disagreements on the disposition of the city’s statues of Confederate Gen. Thomas “Stonewall” Jackson and Meriwether Lewis, William Clark and Shoshone interpreter Sacajawea. All three statues were removed by the city in July. However, after members of the public voiced their frustration with the delay, the councilors agreed to vote on disposition of the Lee statue only. The vote took place minutes after midnight.

The Jefferson School’s project, entitled Swords Into Plowshares, received almost 30 letters of support from organizations and individuals; including Del. Sally Hudson, The Descendants of Enslaved Communities at the University of Virginia, The Bridge Progressive Arts Initiative, the Equal Justice Initiative, Charlottesville Black Arts Collective, the Black History Museum and Cultural Center of Virginia, descendants of Monticello’s enslaved community and members of the former Blue Ribbon Commission on Race, Memorials and Public Spaces, among others.

Andrea Douglas, Executive Director of the Jefferson School, told The Daily Progress in October that she and her colleagues had spent months ironing out the details of the proposal.

“The idea that a community could take the implements of war and turn them into plowshares or implements of social good is really what’s behind this. So, when we think about the project, it is about transformation, taking something that is symbolically traumatic and turning it into something that responds to the cultural values of Charlottesville,” Douglas said.

Councilor Michael Payne said it was the only proposal for acquisition of the Lee statue that he would support. Snook voiced concerns whether it was feasible for the museum to actually melt the statue and how big of a financial gift the statue would be.

Councilors primarily disagreed on the disposition of the Lewis, Clark and Sacajawea statue. The Lewis and Clark Exploratory Center has been in consideration by the city for ownership of the statue since before it was removed. Executive Director Alexandria Searls submitted a proposal for recontextualizing the statue that includes bringing awareness to the crisis of missing and murdered indigenous women. The statue would be juxtaposed against Native American art and items in the museum’s collection related to the exhibition. Searls has worked with members of the Shoshone tribe for several years to discuss appropriate interpretation of the statue and other representations of Sacajawea.

While most councilors voiced support for the LCEC proposal, councilor Lloyd Snook voiced concern that the city needed to accept at least one proposal that would help recoup money spent on the removal of statues. He suggested selling the Lewis, Clark and Sacajawea statue to Harlan Crow, a real estate developer who owns a statuary garden in Texas who submitted a proposal.

“If we’re giving the statue to the Lewis and Clark Exploratory Center, we’re effectively giving them a gift that costs us $325,000. Would we give them $325,000 in cash? I think the answer is clearly no,” he said.

“I don’t like anything about that statue and seeing it in the park I think is problematic too, but selling it to that individual in Texas is I think more problematic,” Walker said.

She said she’d rather have a discussion with LCEC about how to properly contextualize the statue.

“[The Crow proposal] screams white supremacy,” Walker said, adding that people should not be able to have a tea party in a garden where symbols of white supremacy are displayed.

“There’s a saying, all money ain’t good money,” she said.

Hill and Payne said they agreed with Walker, and Hill said members of the public who spoke at the meeting solidified her position that the statue should go to the LCEC.

City Attorney Lisa Robertson pointed out the base of the Lewis, Clark and Sacajawea statue still has to be removed, which could cost as much as $250,000.

Robertson said city staff doesn’t have a recommendation to City Council, but needs more direction as to what the council wants. Walker brought up the idea of leasing the statue to LCEC with conditions attached. Robertson said she and staff would prepare information for the council about whether or not this is a possibility.

None of the councilors expressed a strong feeling about any of the proposals for the Jackson statues, but they discussed a proposal from LAXART, an art museum in Los Angeles that submitted a proposal for the Lee and Jackson statues for an exhibit about decommissioned Confederate monuments and the Lost Cause. Councilors asked city staff to reach out to LAXART representatives to see if they would be open to just acquiring the Jackson statue.

Deputy City Manager Ashley Marshall said the city received seven proposals for the Lewis, Clark and Sacajawea statue and six for Lee, Jackson or both. Under a state court order, City Council was required to solicit and consider proposals for disposition of the statues, but not required to accept any of them.

“This proposal best speaks to the values of equity and racial justice that the Human Rights Commission was created to advance and we urge you to select it,” Bauer said.

Lisa Draine, the mother of a survivor of the car attack at the Unite the Right rally on Aug. 12, 2017, spoke in support of the Jefferson School proposal. She said her daughter, a University of Virginia student at the time, was severely injured in the deadly car attack that killed Heather Heyer.

“For four years, I’ve driven by the Lee statue reliving that awful weekend that my family and our community endured … Last summer when the Lee and Jackson monuments finally came down, I breathed a sigh of relief but I knew we weren’t done,” Draine said.

“Removing the statues was a huge symbolic victory, but that act would not bring back Heather Heyer or undo the physical and emotional damage to my daughter and the dozens of others who were injured on [Aug. 12, 2017]. And above all, it would not correct the harms of the past 400 years that our Black citizens have endured. As long as the Lee statue remains intact, the harm persists,” she said.

Several speakers came out in support of the Lewis and Clark Exploratory Center acquiring the statue, including descendants of Sacajawea and other members of the Shoshone tribe.

Rose Ann Abrahamson, a direct descendant of Sacajawea, said she wanted to see the statue in a contextualized position that dignifies Sacajawea’s legacy.

“Let us give [Sacajawea] her reward as a dignified catalyst of peace and unity between cultures. Place this statue in the Lewis and Clark Exploratory Center … so that we can celebrate this month and this holiday in peace knowing that we made the right decision,” Abrahamson said.

Anthony Lopez, co-founder of the Native American and Indigenous Studies Center Initiative at UVa, voiced his support for the LCEC proposal. He said he trusted the center to appropriately handle the recontextualization because of its existing partnerships with Native American representatives.

“We have a very productive and collaborative partnership with the Shoshone representatives, Rose Ann Abrahamson and her family, and the Lewis and Clark Exploratory Center is facilitating that,” Lopez said. “That’s the direction I would urge Charlottesville to go.”

The person who spoke against the statue proposals, Mark Kavit, equated the melting of the Lee statue to book burning.

“I think we need to really be careful about destroying our art. This is really, really outrageous. To me, the same thing would be burning books,” Kavit said.

COVID: HOSPITALIZATIONS AT ALL TIME HIGH

Pelosi: More needs to be done after Biden's year

Pelosi: More needs to be done after Biden's year

Since July, Charlottesville’s surrendered generals have been awaiting their fate in a storage facility off Avon Street.