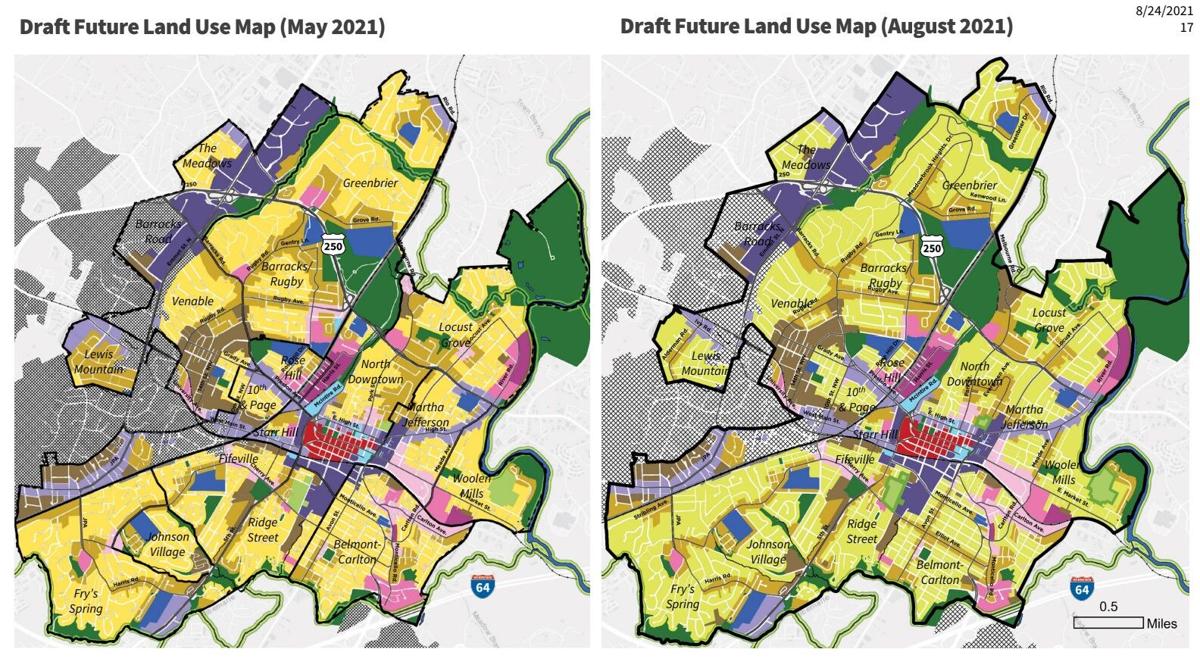 This image shows the changes between the May and August drafts of the Future Land Use Map. 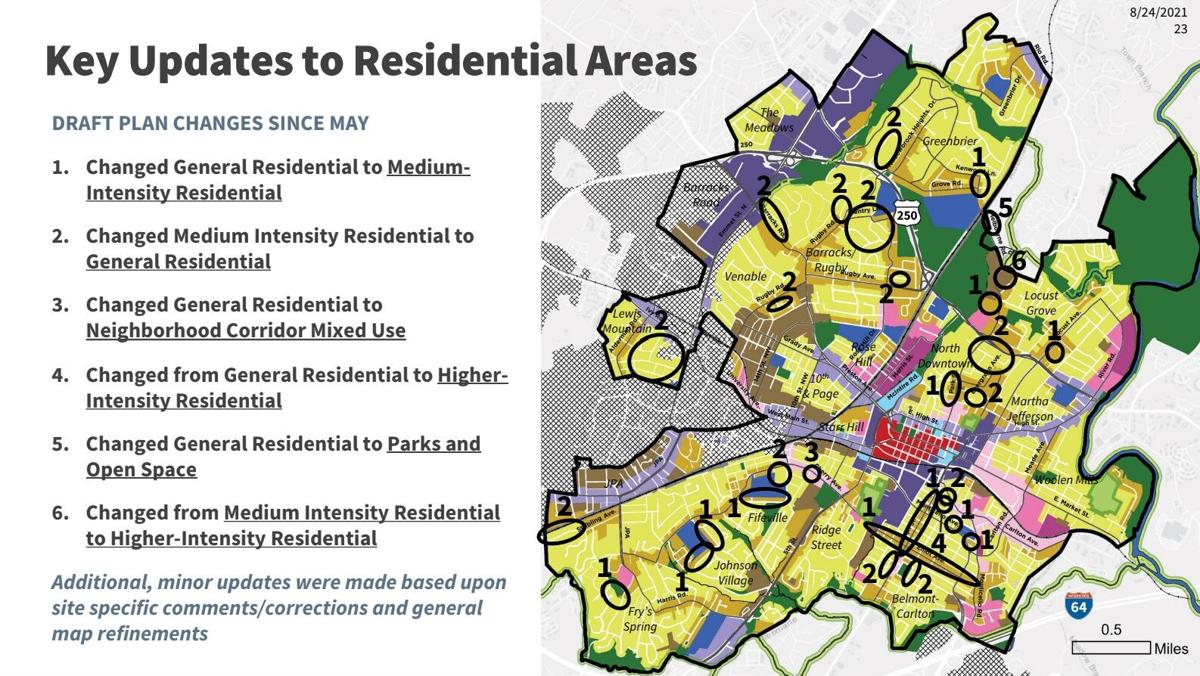 This map shows the changes made to residential areas in the latest draft of Charlottesville's Future Land Use Map. 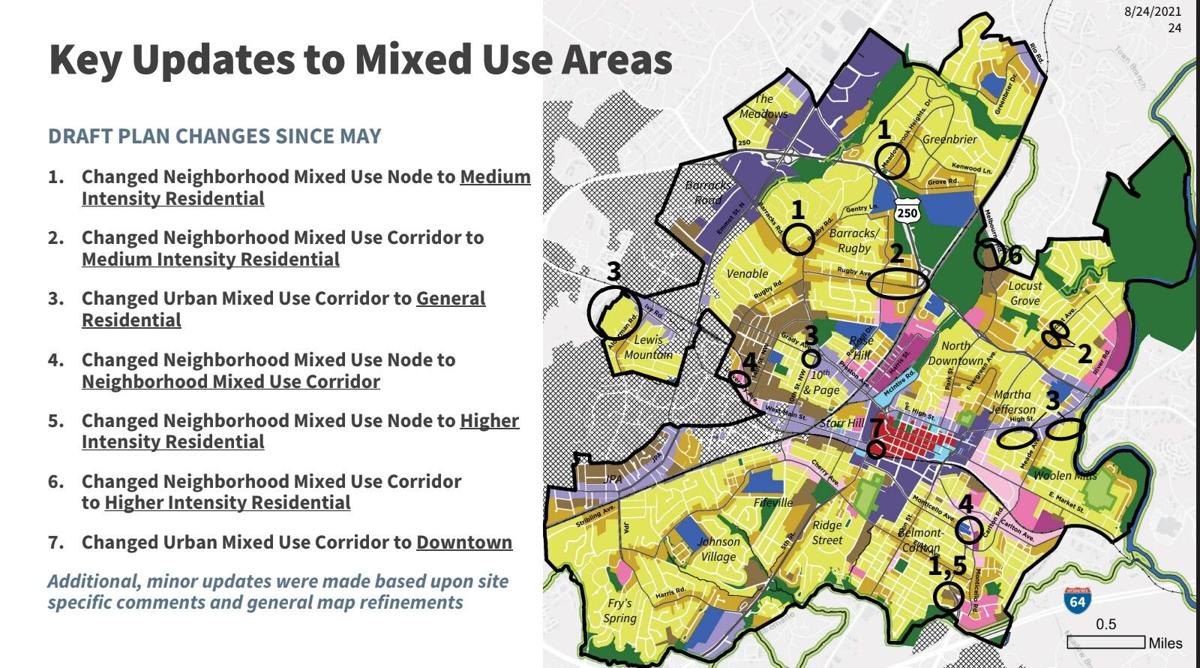 This map shows the changes made to mixed-use areas in the latest draft of the Future Land Use Map.

After several months of controversy and debate, Cville Plans Together has presented an updated draft of the Future Land Use Map after receiving constituent input. However, community members with a variety of perspectives still find this update problematic.

Cville Plans Together is a committee made up of planners from the consulting firm Rhodeside and Harwell who are working on the revisions to the city’s Comprehensive Plan, a guide for local land-use and other big-picture decisions that was last updated in 2013. The Future Land Use Map is a part of this plan.

While it is not a zoning map, it provides a framework for what kind of zoning could be allowed in the future. The zoning code hasn’t been substantially revised since 2003.

Cville Plans Together has produced three drafts of the Future Land Use Map in the last several months, presenting the initial draft in March and an updated draft in May.

A new draft presented last week makes changes from the May draft, which was highly criticized by many in the community for its proposed density allowances in certain neighborhoods. Residents of neighborhoods currently designated as R1 or single-family home zoning were particularly vocal and critical about the prospect of increased density and multi-family residences in their respective neighborhoods.

Jenny Koch, project manager with Cville Plans Together, said the changes were made especially with public input and a recommendation from the city’s Housing Advisory Committee in mind. She said the team received more than 2,300 comments on the proposed map.

The draft proposes that these are sensitive areas that may require additional affordability requirements, incentives or other tools to support residents. They were identified with average median income and percentage of minority residents in mind.

The draft also pulls back on some previously proposed mixed-use nodes in the Barracks/Rugby, Greenbrier and North Downtown neighborhoods. This will prevent higher-intensity residential and retail activity in these areas. The draft also significantly reduces density in the Lewis Mountain neighborhood.

The draft proposes new definitions to residential categories. Under this draft, General Residential areas now will allow dwellings of up to four units only if the fourth unit is affordable. Previously, only three-unit dwellings were permitted. Building heights can be up to two-and-a-half stories, down from a previous three-and-a-half stories.

Under the new draft, medium intensity areas can include “house-sized” multi-unit buildings of up to 12 units, accessory dwelling units, cottage courts, rowhouses and townhouses. Affordability requirements may be established for sensitive communities and will be considered for other areas in the city to address housing goals.

Medium intensity areas also would limit buildings to three stories, four in certain circumstances, down from the four-and-a-half allowed in the May draft.

On Aug. 31, Cville Plans Together presented these changes to the city Planning Commission during a work session that ran for five and a half hours, three hours of which were devoted solely to public comment. The meeting only ended due to a tornado warning that was issued minutes before midnight.

Fifty-four people spoke during the public comment period of the meeting, all displaying dissatisfaction with the map, but for different reasons.

Some community members said they felt the process had been rushed and hushed.

“We recently purchased in Charlottesville and moved here and, honestly, had we known before we purchased, we would not have purchased here,” said Michelle Rowan. “We had no idea that the ultimate goal of Charlottesville was to have this high-density area. It would have been nice if you guys would have taken the opportunity to spread the word. It kind of feels very much like you guys did this fairly underhanded and it was not a well-known fact.”

The Comprehensive Plan update process has been going on since late 2016. Cville Plans Together held six in-person pop-up events and two Zoom webinars for public input in May and June.

Other community members were concerned about preserving neighborhood profile.

“I’m totally in favor of more housing, if it’s affordable. I realize that it’s a difficult situation. But I’m very concerned about the law of unintended consequences. The beauty of a neighborhood like Belmont, for example, is the beautiful, old single-family homes,” said city homeowner Fred Borch.

“I don’t want the traffic, the trash, the noise, the crime and all of that which naturally accompanies denser neighborhoods. No homeowner would sign up for this. Not a Black one, not a white one, not a purple or green one,” said Marva Simpson.

Other community members were concerned the map doesn’t do enough to address the affordable housing crisis or the issue of historically racially exclusionary neighborhoods.

Crystal Passmore, a renter, said she is concerned that Cville Plans Together responded in the revised draft primarily to the people who have had the time and resources to organize with neighborhood associations and attend meetings instead of people who just wrote emails and left voicemails. She noted that the time Planning Commission meetings are held is not ideal or accessible to many people who need childcare.

“I know that one of the top comments you received was to make historically exclusionary areas more dense, to protect minority communities and to generally increase density across the city. Those were the top three comments you guys received by email and by voicemail, which is where you received the most comments, over 1,000 comments,” Passmore said.

“I feel like these are the closest thing we have to representative of how the city actually feels. It does not seem like you took any of these notes. In the current draft, you specifically allowed less density in the historically exclusionary areas where most people asked for more. You increased the maximum building height when people asked for an increase in density citywide.”

Data collected by Planning Commissioner Rory Stolzenberg about the those who spoke at the Aug. 31 work session shows that 48 of the 54 speakers were city homeowners, five were renters and one was a homeowner in Albemarle County.

By far, the most speakers, 20, came from the Barracks/Rugby neighborhood. Belmont and Greenbrier had five speakers each, and Fifeville had four speakers. Three speakers were from the Martha Jefferson neighborhood. Fry’s Spring, Lewis Mountain and Ridge Street each had two speakers. Locust Grove, The Meadows and Venable each were represented by one speaker.

Outside the Planning Commission meeting, many community groups have organized to rally Cville Plans Together to make changes in the past week.

A letter organized by the Charlottesville Low-Income Housing Coalition asks the Planning Commission to address inequities in city planning.

Specifically, it asks Cville Plans Together and the Planning Commission to prioritize housing for people earning up to 30% of area median income; address racial and economic inequities by ensuring historically exclusionary neighborhoods become integrated through affordable multi-family housing; and protect current Black residents from further displacement by protecting the historically Black neighborhoods of 10th and Page, Fifeville and Rose Hill from increased density.

“These values must be prioritized if we are to repair damage caused by historical racism, slow the tide of displacement from Charlottesville’s predominantly Black neighborhoods and begin building a trusting relationship with lower-income residents,” the letter says. “Charlottesville should be for everyone. For far too long discriminatory practices and the whims of the market have caused massive harm and irreparable losses to Black communities and the culture of our community. We appreciate all that you do to turn the tide and remedy injustice.”

Livable Cville, a community organization that advocates for affordable housing and equity in the city, wrote its own letter to the Planning Commission. In it, the organization voiced concern that the latest draft of the Future Land Use Map was edited to reflect the opinions of one demographic.

“... it appears the revised FLUM you are considering this week will likely significantly limit Charlottesville’s ability to meet its goal of providing additional multifamily housing without furthering displacement,” the letter stated.

“In some cases, the latest draft makes it harder to build new homes than the status quo … changes in the new draft appear to be driven by affluent, white neighborhoods. Parcels with density shifted from Medium-Intensity Residential to General Residential were over $100k more valuable than parcels with increased density or no change compared to the prior FLUM draft. Also the downzoned parcels were in neighborhoods with small percentages of Black residents (5.5%) and incomes 20-30% higher than neighborhoods that saw increased density or no change,” the letter continued.

The contentious process of approving any land use or zoning changes is far from over.

Currently, the timeline is for the Planning Commission and City Council to approve the Future Land Use Map and Comprehensive Plan draft updates in October or November. If both bodies approve these, a zoning rewrite will commence soon thereafter. However, the drafts could be bounced back to Cville Plans Together for further revision.

If the updates are adopted, the zoning rewrite will occur in late 2021, allowing time for community input related to zoning to be refined throughout most of 2022. The rezoning would be adopted in November or December 2022.

Many homeowners from areas of single-family homes don't want the neighborhoods changed by the erection of multiple-family dwellings. On the other hand, there is a desire to increase housing density and develop affordable housing.

We picked single-family neighborhoods as the best fit for our housing goals. Yet Charlottesville is trying to unilaterally cancel our choice.

This image shows the changes between the May and August drafts of the Future Land Use Map.

This map shows the changes made to residential areas in the latest draft of Charlottesville's Future Land Use Map.

This map shows the changes made to mixed-use areas in the latest draft of the Future Land Use Map.