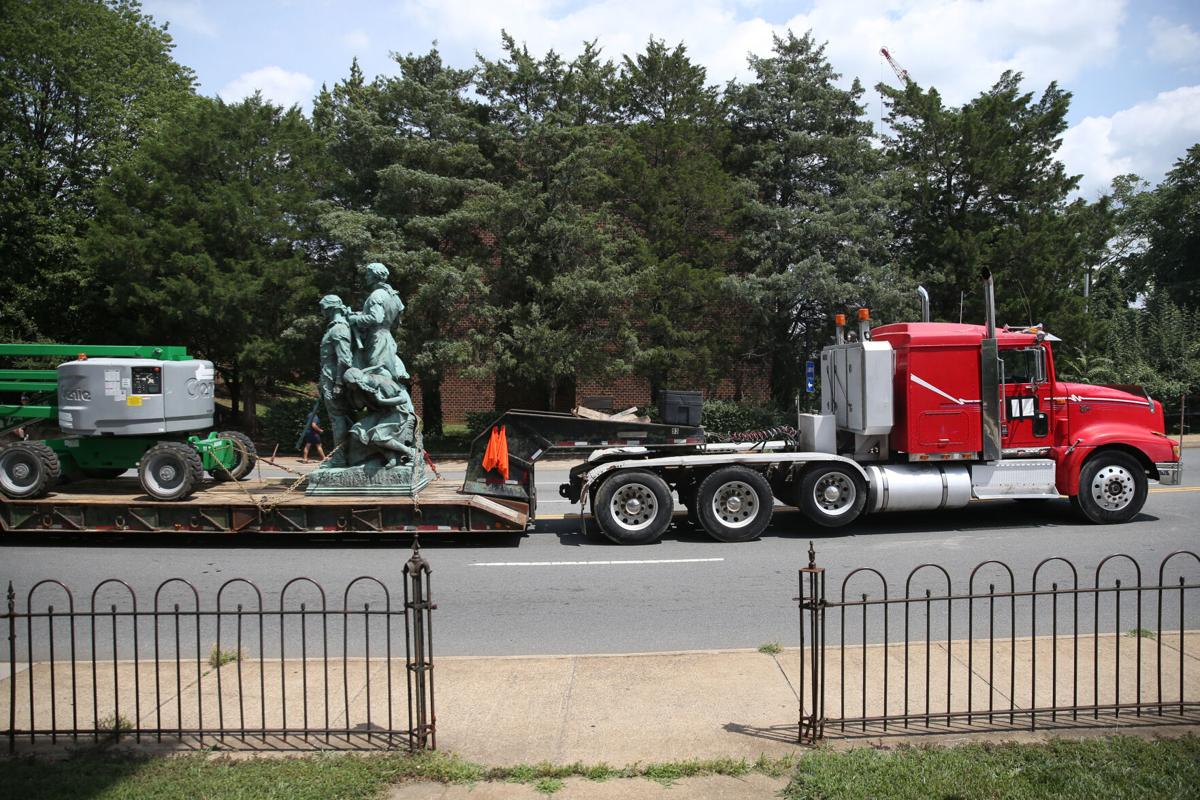 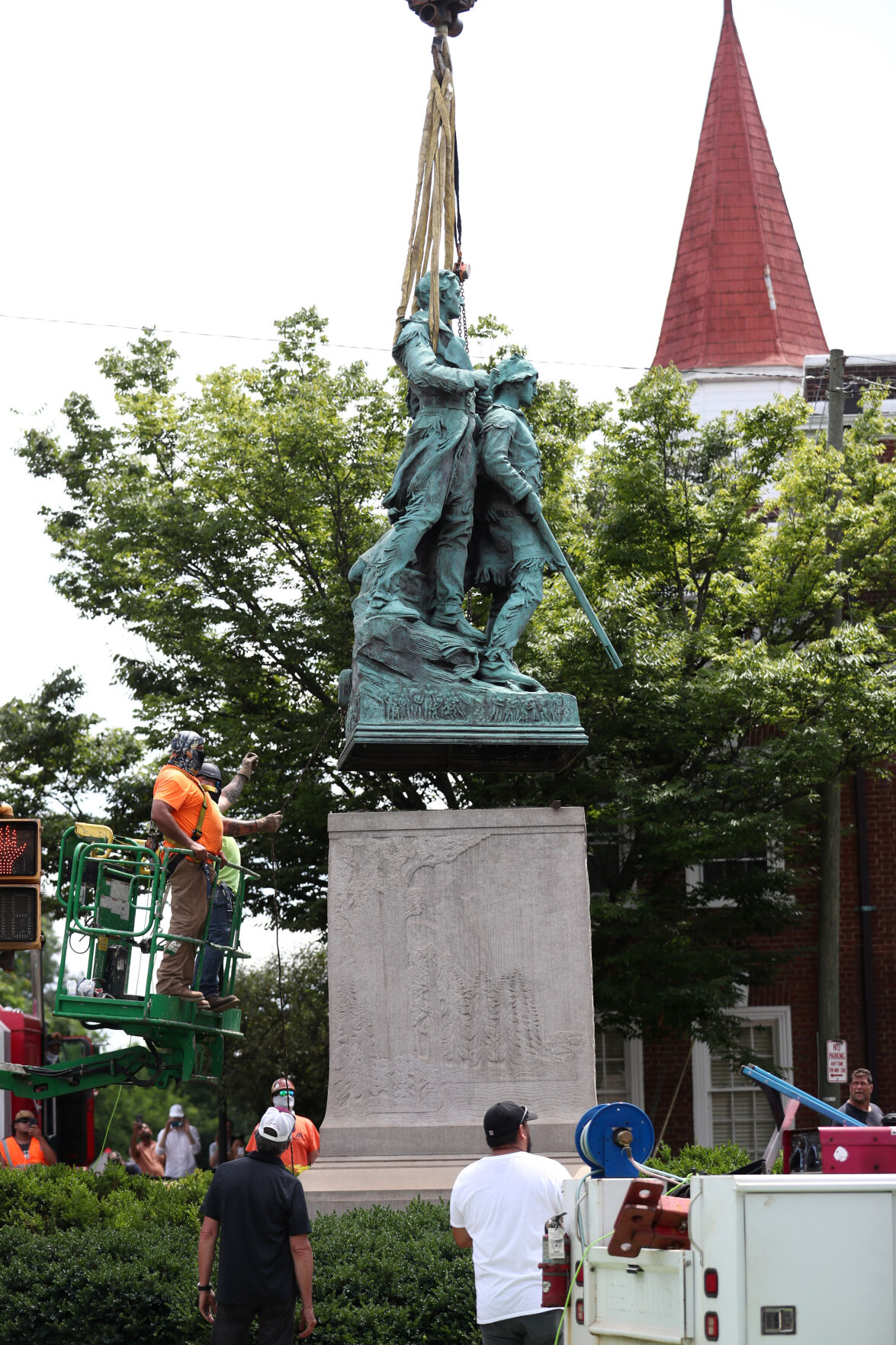 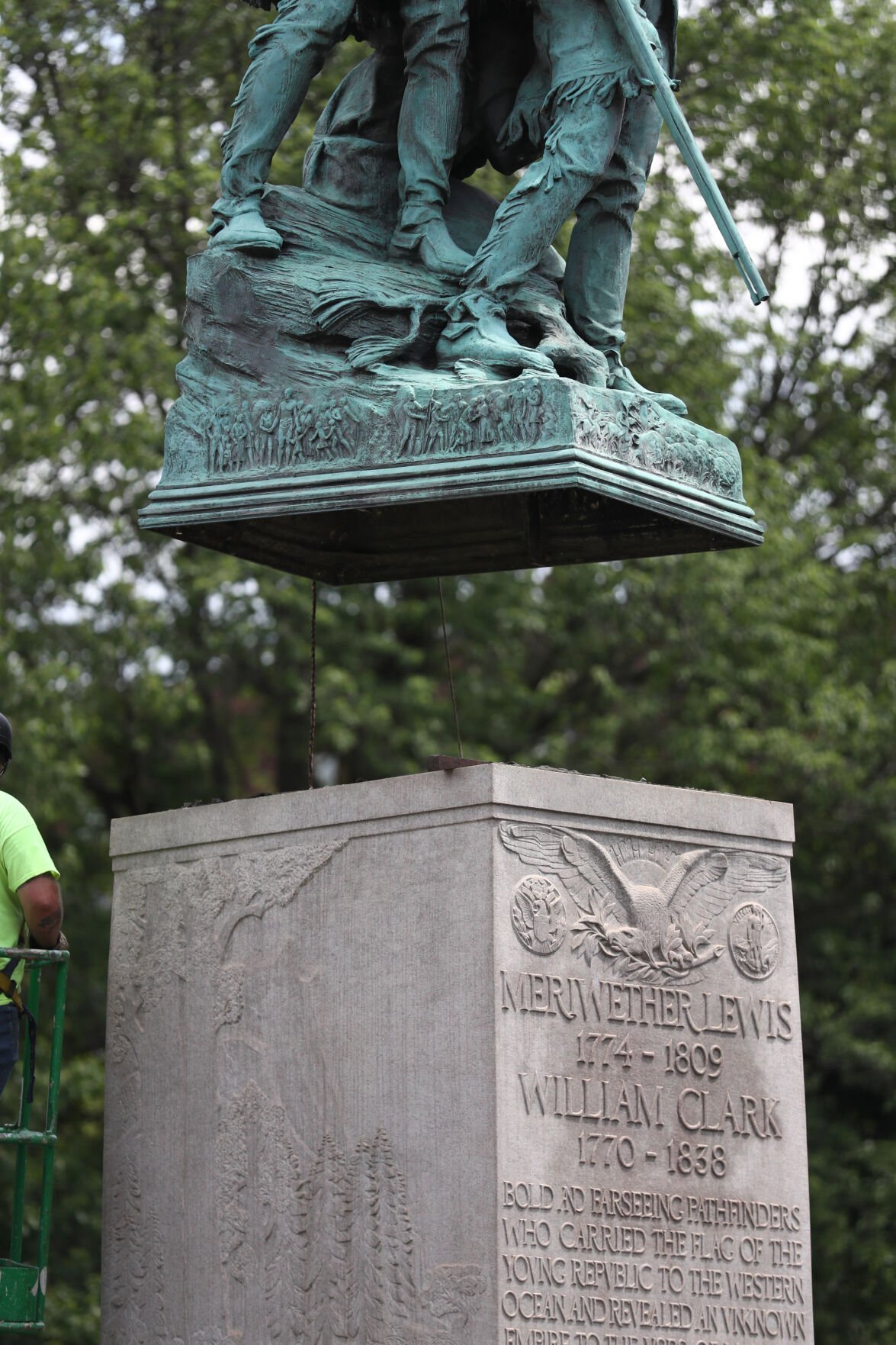 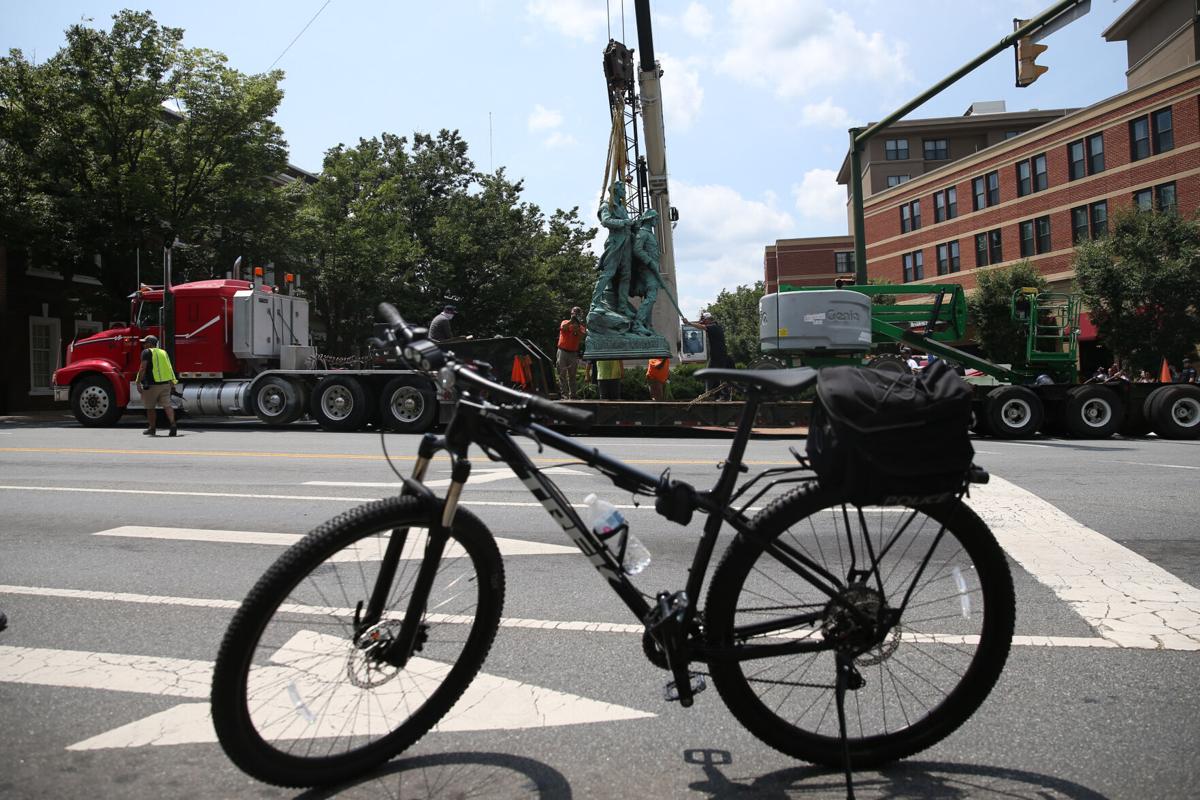 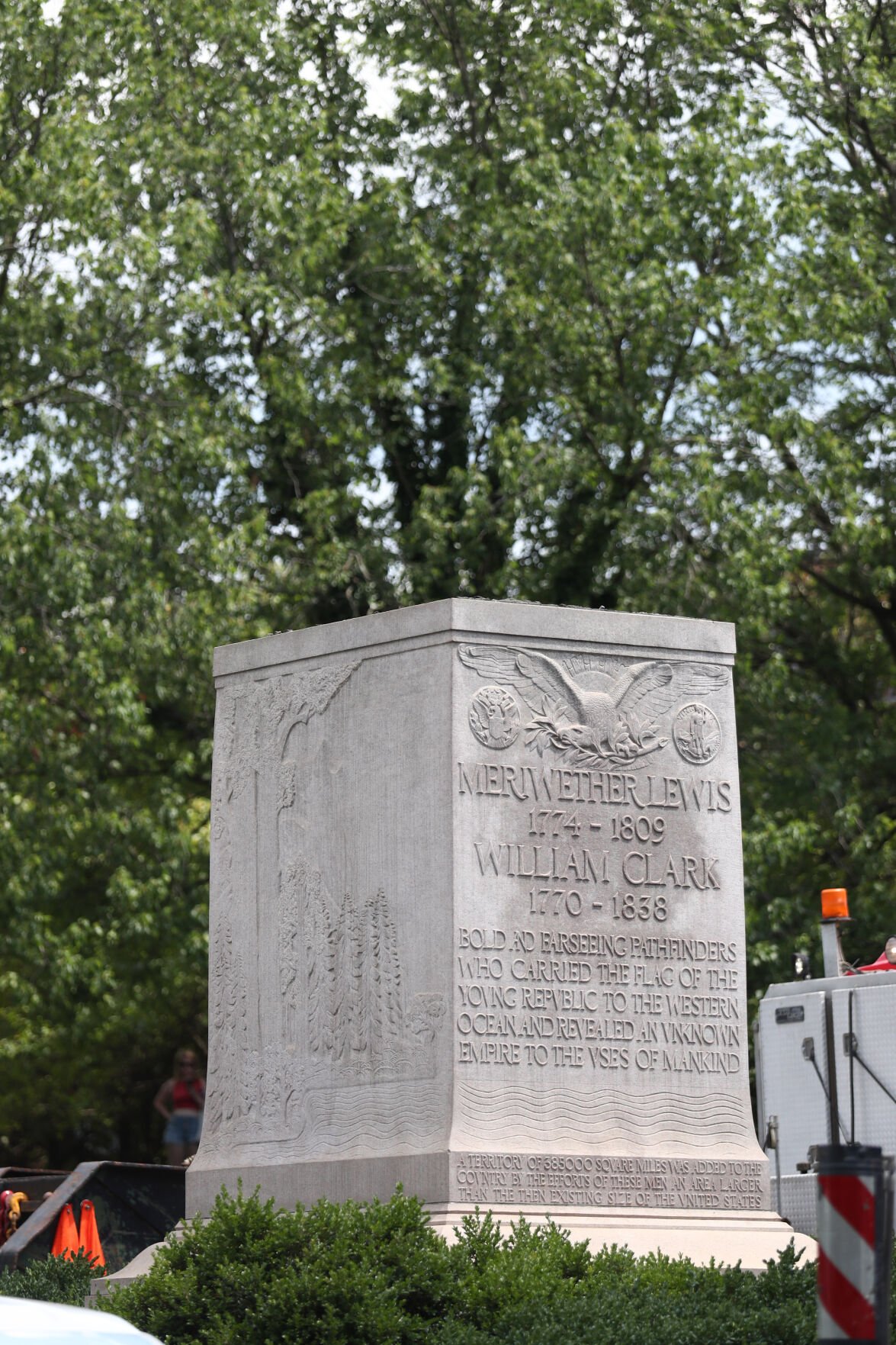 The last of the city's contested statues left its pedestal off West Main Street on Saturday afternoon after Charlottesville's City Council voted unanimously to remove the statue of Meriwether Lewis, William Clark and Shoshone interpreter Sacagawea during a special meeting earlier in the day.

The statue of Lewis, Clark and Sacagawea departed the intersection where it has stood since 1919 at around 2:45 p.m. aboard a flatbed truck.

The statue was taken to Darden Towe Park in Albemarle County, where the Lewis and Clark Exploratory Center is located.

The city closed all streets in the immediate vicinity of the Ridge-McIntire-West Main Street intersection for several hours to make way for the removal of the statue, according to a traffic advisory.

The council voted to approve a resolution that said the statue shall be removed from its current location on West Main Street and transported to a storage location owned, or co-owned by the city, and authorized the city manager to carry out this relocation.

The meeting was announced 20 minutes prior in an email sent to the press holding credentials to cover the removal of the Robert E. Lee and Thomas “Stonewall” Jackson statues in the morning.

City Manager Chip Boyles said the meeting was called because the removal of the Confederate statues went so smoothly and quickly that the crew would be able to remove the Lewis-Clark-Sacagawea statue Saturday as well with no additional funding required. On Wednesday, city councilors appropriated $1 million for the removal of all three statues.

During Saturday's meeting, the City Council also discussed the potential for the statue to be relocated to the Lewis and Clark Exploratory Center during its meeting.

Alexandria Searls, director of the center, said the center had worked with Shoshone people who were interested in creating recontextualized art to accompany the statues.

“We need to ensure that the recontextualization is driven by and fully includes indigenous residents in the indigenous community,” Councilor Michael Payne said. “That's really the only question mark to me.”

Rose Ann Abrahamson, a descendant of Sacagawea and a Shoshone-Bannock woman, weighed in on the decision during the meeting.

“I feel that it should just be melted down,” Abrahamson said. “That's my opinion. I feel that it's entirely offensive and it should be obliterated. But if it can be utilized to give a message to give a greater message to educate the public, that would be an opportunity. So I'm very pleased with what is taking place, and it's been a long road.”

Abrahamson said she hopes the contextualization will focus on Native American women, specifically those who have gone missing.

The City Council voted in November 2019 to remove the statue of Lewis, Clark and Sacagawea. Lewis was born in Albemarle County. In 1804, President Thomas Jefferson tasked Lewis and Clark with exploring land west of the Mississippi River that was part of the Louisiana Purchase.

In 2019, councilors discussed the statue with Native Americans, including descendants of Sacagawea who traveled to Charlottesville from Idaho. The statue has been criticized for its portrayal of Sacagawea in a crouched position below Lewis and Clark.

Abrahamon said during a work session in 2019 that she has seen nearly every depiction of her ancestor in the country.

Some historians have interpreted Sacagawea’s kneeling position as her directing the explorers and tracking.

During Wednesday’s special meeting to appropriate the funding, Mayor Nikuyah Walker responded to public criticism of the removal of the statue of Lewis, Clark and Sacagawea.

“[We tried] to be really thoughtful about making that decision by bringing in Sacagawea’s descendants here,” Walker said. “… And so this is I think how we should make decisions. We tried to remove what we thought, and ask them what they thought, and that’s how this decision was made.”