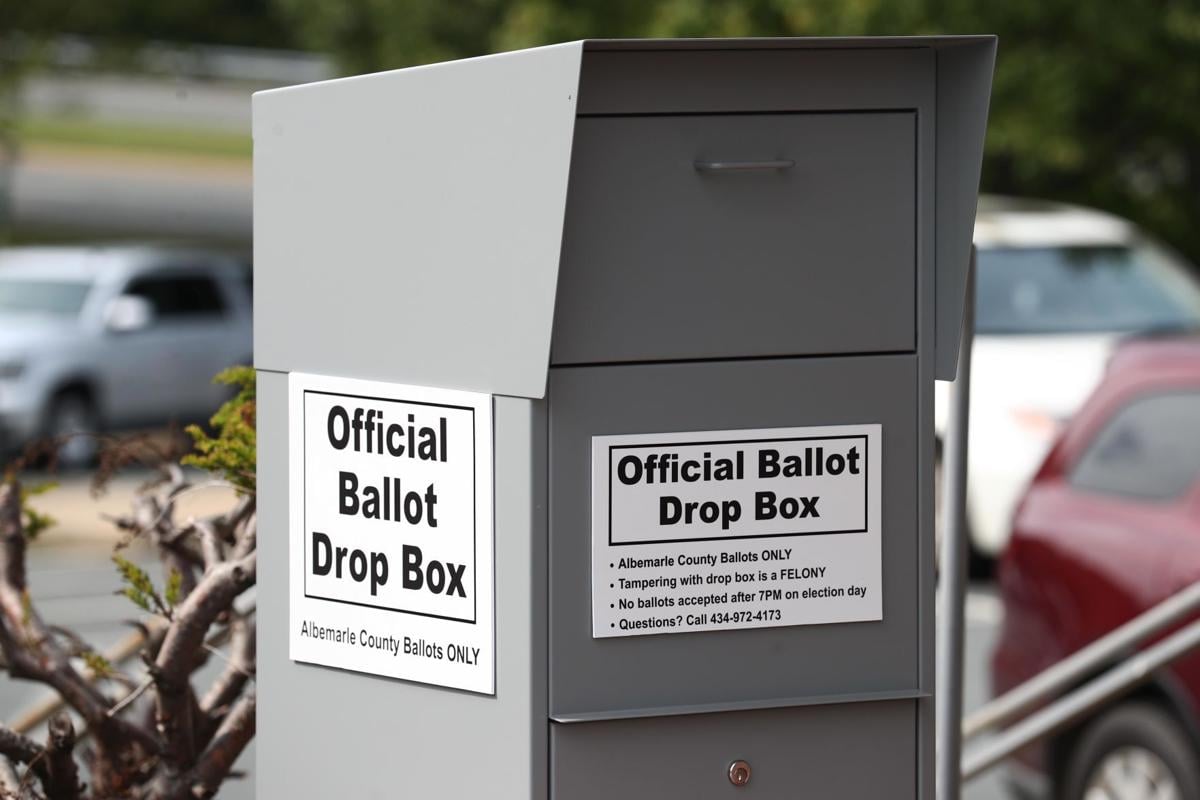 An Official Ballot Drop Box sits outside of Albemarle County Office Building in preparation for in-person voting, which starts Sept. 18. 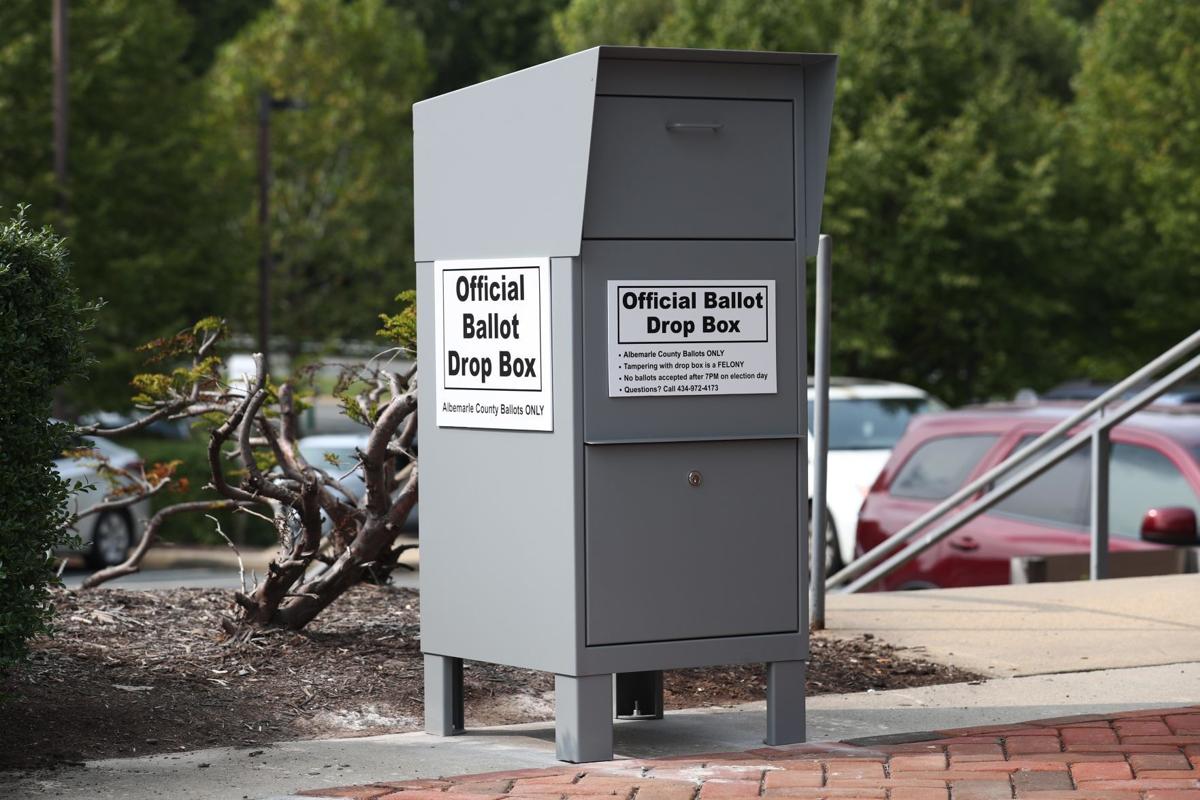 Albemarle County and Charlottesville are preparing for voters to start casting their ballots on Friday.

The Nov. 3 election will be Virginia’s first with no-excuse voting by mail and early in-person voting, starting Friday and ending the Saturday before the election.

Voters in Charlottesville can vote early at the city’s election office at 120 7th St. NE, City Hall Annex, and Albemarle voters can cast an early ballot at the 5th Street County Office Building at 1600 Fifth Street.

Voters don’t need a photo identification to cast a ballot early or on Election Day, although it’s still the easiest method to vote. Any government document, such as a utility bill or paycheck, bearing your name and address will be accepted.

Virginia went for Democrat Hillary Clinton in 2016 and Biden leads Trump in the state by a margin of 53% to 39% in a poll released this week by Virginia Commonwealth University. Jorgenson wasn’t included in the poll.

In the 7th Congressional District, which includes Louisa and Orange counties, Democrat Rep. Abigail Spanberger is being challenged by Del. Nick Freitas, R-Culpeper.

There also will be two statewide referendums on the ballot. One relates to Virginia’s redistricting process, while the other concerns taxation of vehicles used by people related to members of the armed services.

The deadline to register or change registration information is 5 p.m. Oct. 13.

Requested ballots will be mailed on Friday. The deadline to request a mailed ballot is 5 p.m. Oct. 23.

Mailed ballots must be postmarked no later than Nov. 3 and received by the registrar’s office not later than noon on Nov. 6.

A new law allows Virginians to drop their mail-in ballot in a drop box instead of having to return it via mail. Albemarle’s drop box is in front of the main entrance to the 5th Street County Office Building, while Charlottesville’s is outside of the Registrar’s office in the City Hall Annex.

Jim Heilman, the secretary of the Albemarle Electoral Board, said the county has had more than 18,000 requests for mail-in ballots, when it typically only has had about 1,000 by this time in prior election cycles.

“Staff and volunteers have been working almost literally around the clock … trying to prepare all the materials that go into an envelope that is sent out to the voters,” he said in a media briefing Wednesday morning.

Voters can also hand-deliver their ballots to the 5th Street County Office Building.

More than 80,000 county residents are registered to vote, Heilman said, despite few voter registration drives this year due to the coronavirus pandemic. He said the Electoral Board is working with the school division to communicate with high school seniors on how they can register to vote.

“We’re also hopefully going to have very soon at all of our rural post offices voter registration applications as well as mail in ballot applications for people to take,” he said.

Getting the ballots from the North Carolina printing company to Albemarle was not a simple task, Heilman said. The deputy registrar had to take a rental truck to North Carolina earlier this week where he met a staff member from the company in order to get the ballots in so they could be sent out Friday, he said.

Heilman said there will be an election official sanitizing all of the marking booths at least every 15 minutes, and additional plexiglass sneeze guards are currently being constructed.

All the slots are now filled for election officers for early voting, Heilman said.

“We’ve had people coming out of the woodwork offering to be election officers for November, so we feel fairly certain right now that we are going to have enough officers on November 3 also,” he said.

“In our four-year cycle, this is the big one,” he said Tuesday on the city’s Cville360 program.

As of Monday, Nix said, the city had received 6,500 requests for mail ballots and they expect to send out more than 8,000. In a normal year, fewer than 2,000 ballots would be mailed.

In effect, Nix said, absentee voting has been wiped out by changes associated with the pandemic, although officials still use the same terminology.

“We now have voting by mail and we have early voting. And the big difference is you don’t need a reason to do it,” he said. “Anyone who has already made up their mind on who they’re voting for can vote by mail or in person.”

Registrar Melissa Morton said the city has received such a “high demand” of people wanting to be election officers that they have stopped accepting applications.

“We are well stocked for this election here at our office and at the polls,” she said.

Voters can also return their mail-in ballot in person at the Registrar’s Office or at a dropbox outside the office.

In-person early voting begins on Friday and will be held during weekdays from 8:30 a.m. to 4:30 p.m. The office plans to be open on two Saturdays in late October for in-person voting as well.

Voters will be asked to wear masks and election officials will provide one to people who show up without a mask.

Election workers will be behind plexiglass shields and wearing face masks. Hand sanitizer will be provided and, if voters didn’t bring their own pen, they will be given one that they can keep or return to be sanitized.

Nix said that social distancing measures will be in effect at polling places along with a limit on the number of voters inside buildings at one time.

Absentee ballot requests up 2,000% from four years ago in Albemarle

Many people have stepped up to apply to serve as election officials at the polls— in one week, Albemarle's Electoral Board received more than 100 applications.

An Official Ballot Drop Box sits outside of Albemarle County Office Building in preparation for in-person voting, which starts Sept. 18.