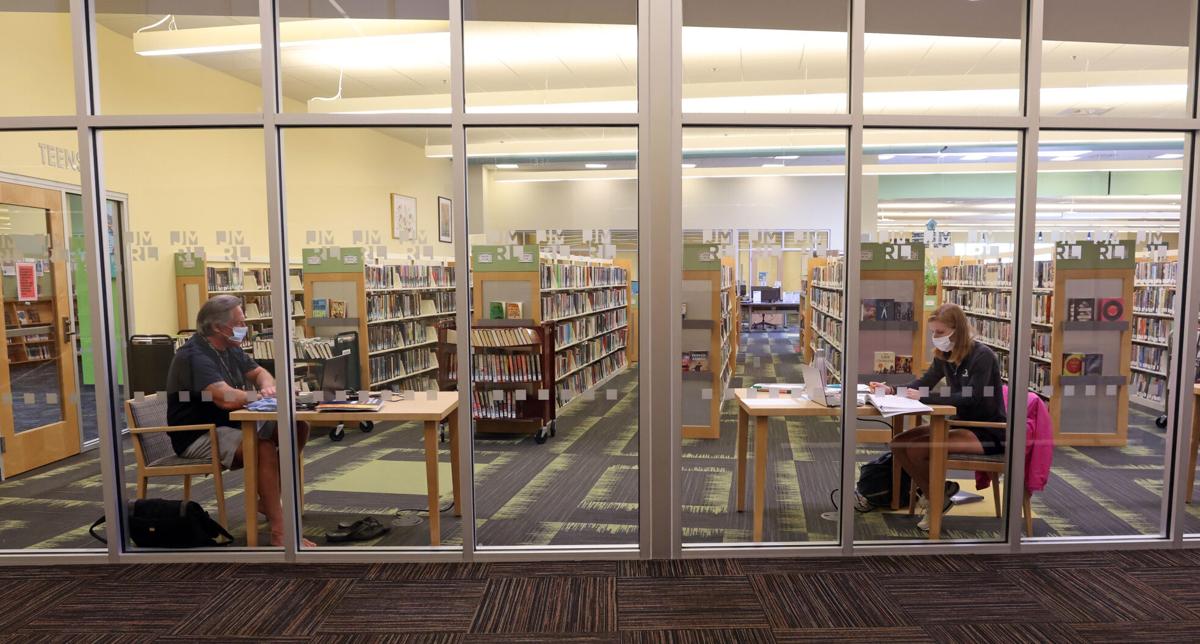 After more than a year of COVID-19 restrictions, all Jefferson-Madison Regional Library branches are now back open to walk-ins. Patrons may browse for books and other materials, ask for assistance, use a computer, read a magazine or newspaper, etc. Meeting rooms are not yet available for use. 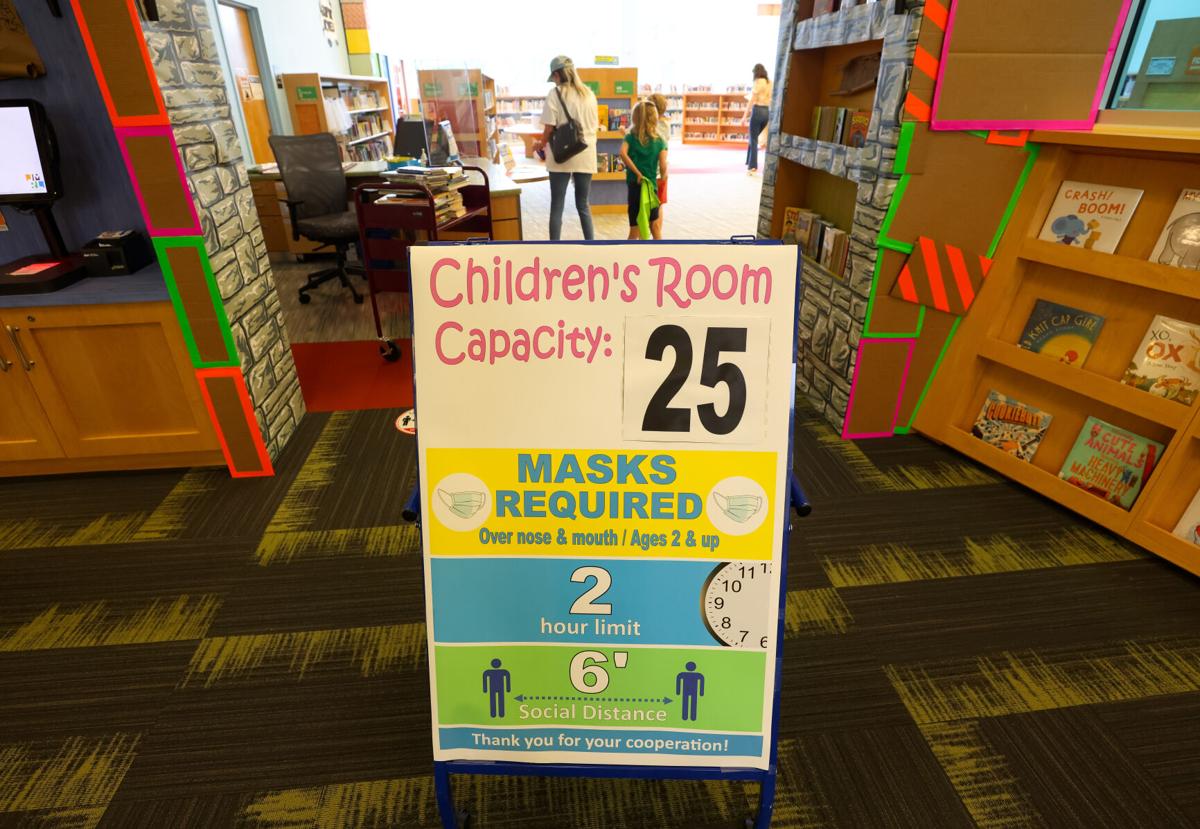 Though appointments are no longer needed to visit Jefferson-Madison Regional Library branches, capacity limits are in place. 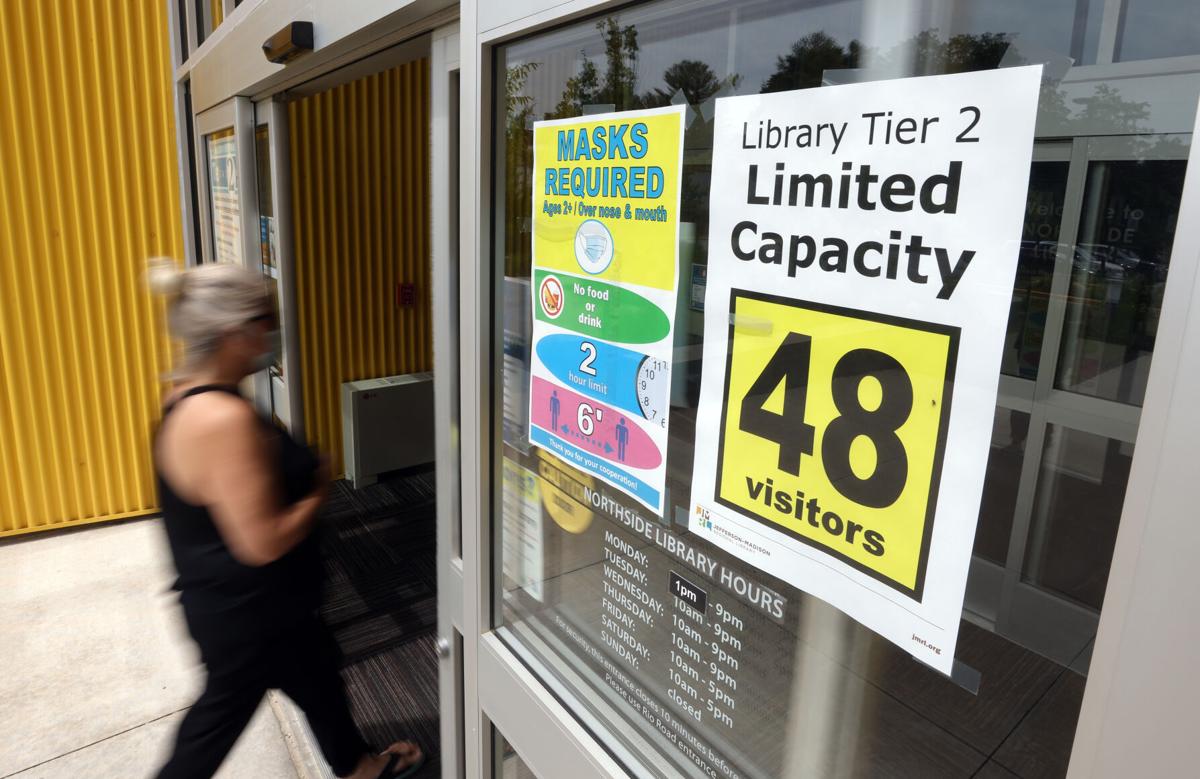 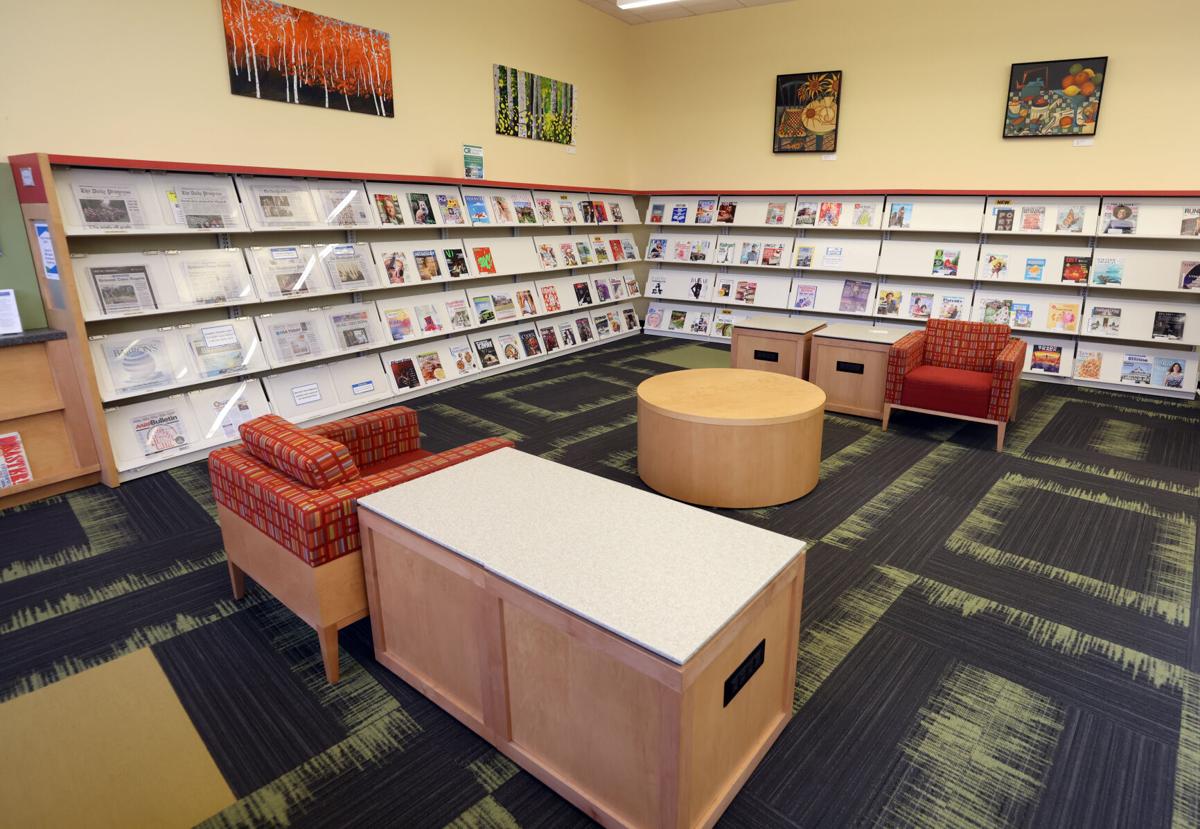 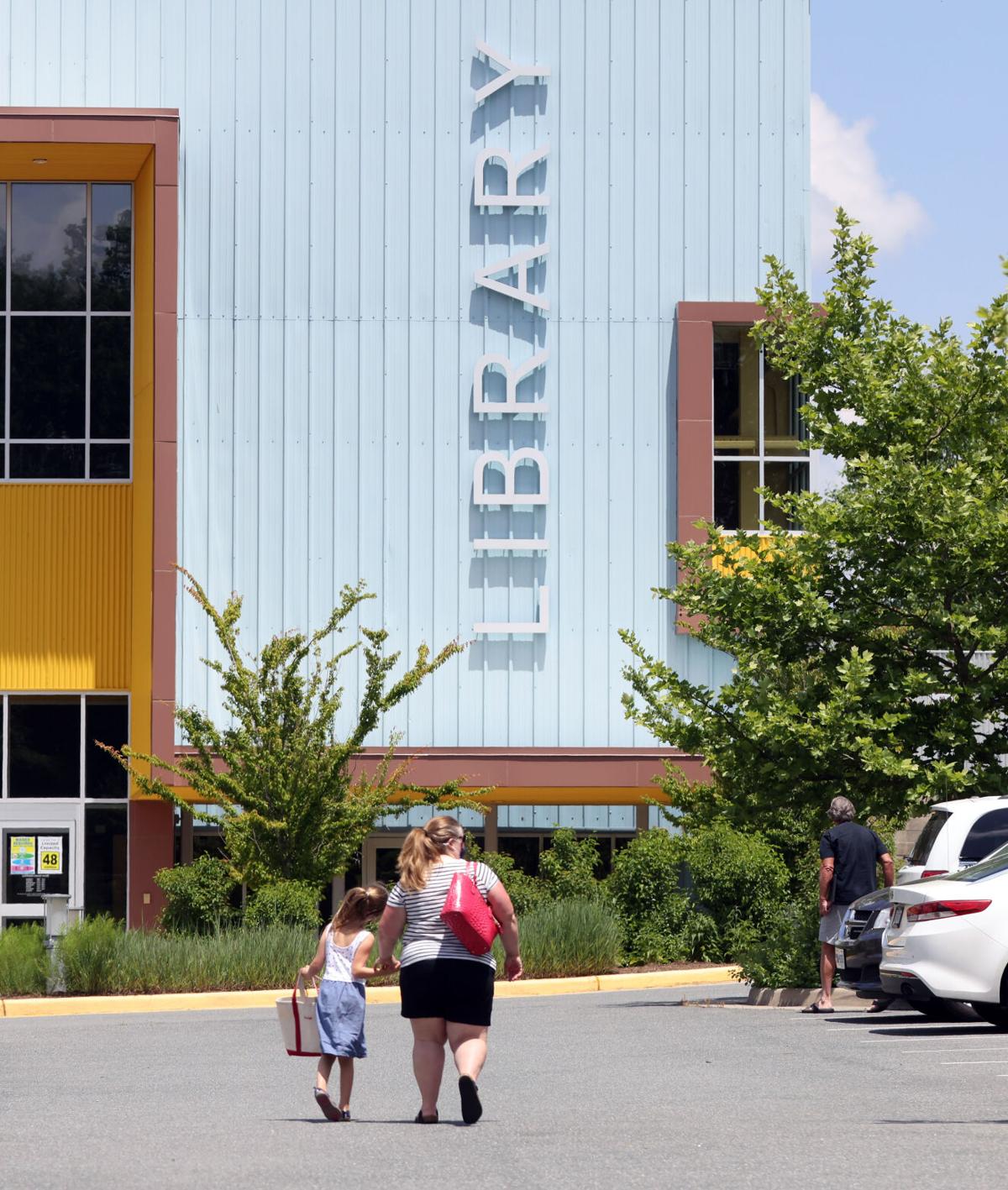 Following what director David Plunkett described as an “incredibly trying” year, the Jefferson-Madison Regional Library is eyeing a full reopening by the end of June, if current trends continue.

Until then, the library is back open for walk-ins. After shutting down entirely in the first two months of the pandemic, the library system has worked over the last year to steadily bring back services in line with its five-tier response plan.

“I can’t say enough about the library staff and how they’ve had to adjust service models multiple times over the last year, and we’re not done,” Plunkett said.

JMRL took its latest step in opening the buildings May 17 when it moved to Tier 2, which gave people the chance to walk through library doors without making an appointment first — the first time in more than a year that community members could do that. Capacity limits are in place.

The library has eight branches across the city of Charlottesville and Albemarle, Greene, Louisa and Nelson counties. Most branches have resumed normal hours, though not all have because of staffing issues. Go to jmrl.org for hours and other information. The summer reading program kicks off Tuesday.

With each tier change, Plunkett said they heard an outpouring of support from communities as people shared how the library was helping them through the pandemic and about what they were missing with the buildings closed.

“When we had the hard shutdown in March, people were not able to get in to complete their schoolwork, to do those job applications, to get the materials they needed to help their kids in school,” he said. “So we tried to spin things up as fast as we could, because we were hearing from people that the libraries are an essential part of their lives and that without it, they can’t meet the needs of their family.”

Tier 1, which amounts to a full reopening of the library system, is the next step. That move and operations beyond the pandemic will be informed by lessons learned over the last year. All branches began offering a form of contactless pickup via curbside or drive-thru options, a service Plunkett said will most likely continue.

Additionally, the library saw success with its virtual programming, including a talk with author Jacqueline Woodson as part of the Virginia Festival of the Book that more than 700 people attended, and learned how to reach new audiences.

“Moving forward, trying to find the balance between in-person and virtual programming is going to be a tall order, but a good one I’m looking forward to,” Plunkett said.

Currently, meeting rooms are not open at the branches, but Plunkett said they are working on plans to free up those spaces.

Starting this week, Plunkett said they will stop quarantining books for 24 hours after they are returned in light of recent studies showing the virus mainly spreads through the air rather than via surfaces. That change will free up space in the branch locations. For example, he said books in quarantine have taken over the quiet reading room at the Northside branch in Albemarle County.

Initially, the library was quarantining books for 72 hours.

The library is on track to lend more than 1 million items during the current fiscal year that ends June 30, Plunkett said, which is lower than a typical year.

“Having the physical buildings closed took a hit out of what people can check out,” he said. “Still, a million items is not too bad for a year.”

In the previous fiscal year, JMRL circulated 1.3 million items. In fiscal year 2019, circulation was up to 1.7 million.

About a quarter of the items checked out this year have been digital, which is 40% more than last year. The digital collection includes downloaded audiobooks, e-books, magazines and movies, among other items.

Plunkett said that at the end of the last fiscal year, the library devoted its book budget to digital materials.

When the library announced in March 2020 that it was going to close, it gave people a few days’ notice so they could check out books and other materials.

“We got overrun, and our shelves were empty at that point,” he said. “... At that point, we thought we’re going to be closed for two weeks and then just open up back to normal.”

But the library branches did not start services up again until late May 2020, when JMRL started providing curbside pickup in Tier 4. Based on community needs and building capacity, some branches opened up to appointments in Tier 3 starting in September.

Each tier change also brought new challenges and adjustments for the branches. The staff has created systems for online library card registration and to take appointments, figured out how to do curbside pickup and then made the switch to allow people in buildings. Prior to the pandemic, only the Northside branch offered drive-thru service.

In Tier 4, that branch was “far and away the busiest service location,” Plunkett said.

Under the current timeline, the library’s reopening would coincide with a summer celebration of 100 years of library service in the area. The first public municipal library in the area opened in 1921 following a gift from Paul McIntire.

Plunkett said they are working with community partners to tell the full story of the organization. The regional library system was created in 1972.

“While the organization now is free and open to the public and libraries are for everyone, the institution was not that way because it was a Jim Crow organization,” he said. “We want to make sure we tell the full story of what library service was like to this community, who it was for and who was denied access to it.”

JMRL is working with the Albemarle Charlottesville Historical Society on an exhibit to display at the downtown branch. They’ve also partnered with local filmmaker Lorenzo Dickerson to make a movie about library services in the area.

Cheney: Jan 6 probe is not a 'political campaign'

Cheney: Jan 6 probe is not a 'political campaign'

County staff will revise the proposed ordinance based on feedback and bring it back to the board at a later date — Aug. 18 at the earliest.

The City Council also voted to approve the design for the Fontaine Avenue Streetscape project.

After more than a year of COVID-19 restrictions, all Jefferson-Madison Regional Library branches are now back open to walk-ins. Patrons may browse for books and other materials, ask for assistance, use a computer, read a magazine or newspaper, etc. Meeting rooms are not yet available for use.

Though appointments are no longer needed to visit Jefferson-Madison Regional Library branches, capacity limits are in place.