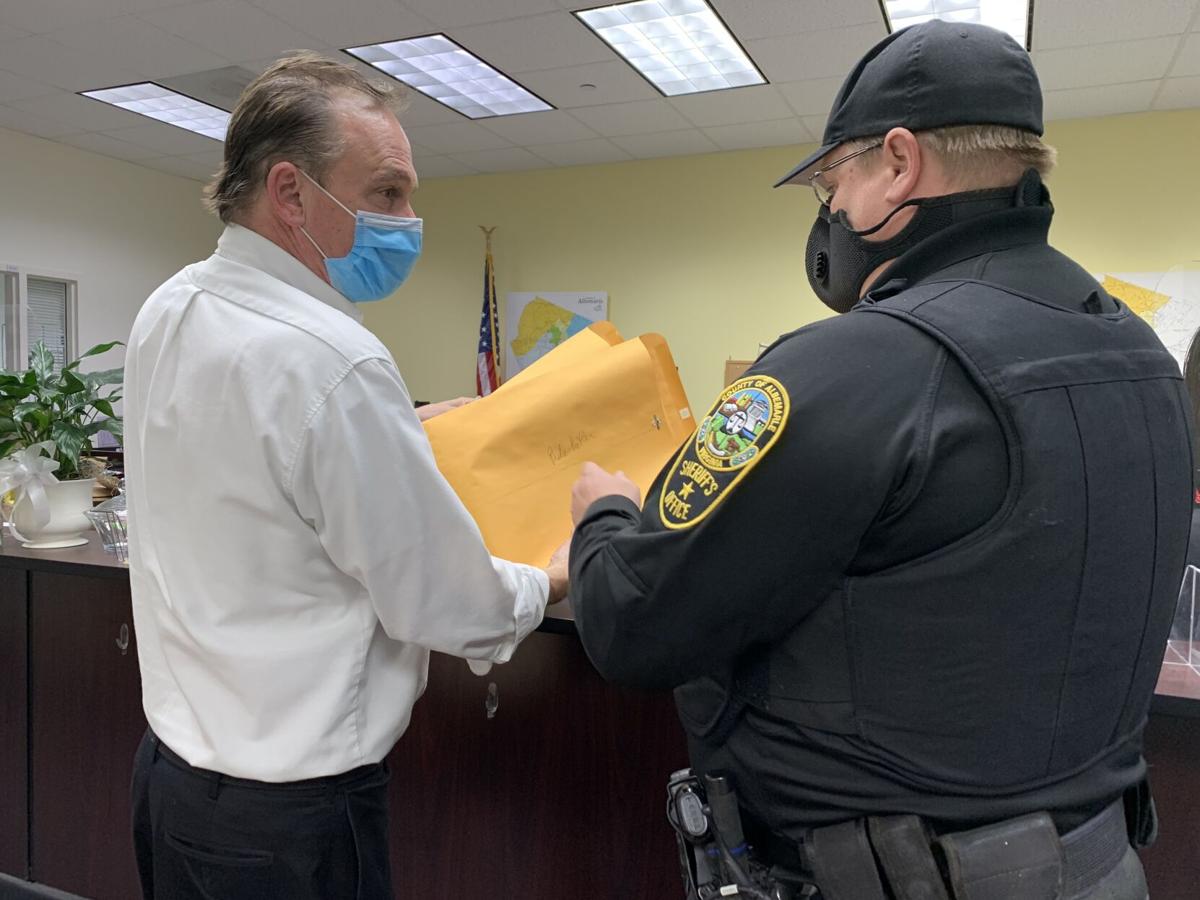 An Albemarle County sheriff's deputy picks up ballots Tuesday evening at the Fifth Street County Office Building to take to precincts that were short. 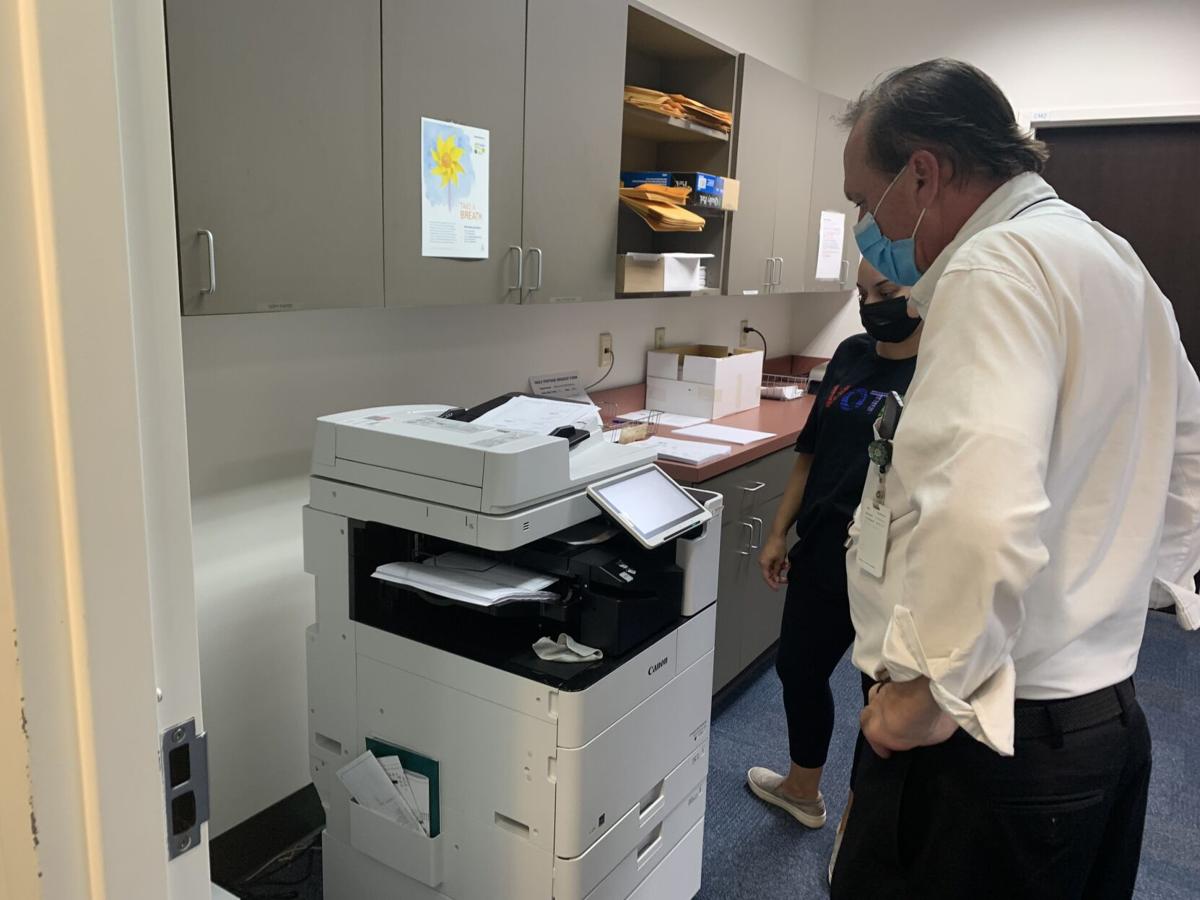 Albemarle County election officials print off ballots Tuesday afternoon for the general election after running out of official ballots.

Voter turnout was so high in Albemarle County that the county did not have enough ballots for the Nov. 2 general election and had to resort to copying ballots on a copy machine and then rush them to precincts in need.

Amid ringing phones and voters coming to the county Voter Registration Office to find out their precinct, election officials were printing additional ballots on 8x11 paper for multiple precincts that ran out of official ballots. Of Albemarle’s 30 precincts, a majority likely needed emergency ballots, but officials declined to say how many.

Registrar Jake Washburne said the printer-paper ballots would have to be counted by hand.

“We just got a turnout far in excess of what we expected,” he said.

Total results were not available by press time for the only contested race in Albemarle County: the Samuel Miller district seat on the county School Board. However, with five of the nine precincts reporting along with mail-in ballots, incumbent Graham Paige had 76.4% of the 3,276 votes cast. Paige likely will win election to a second full-time after facing a write-in campaign from Randy Zackrisson, a longtime Ivy resident and grandparent.

Local election officials raced to deliver the ballots Tuesday evening after discovering that the county had run out. One person called in his license plate number to avoid getting pulled over by the police as he traveled from Free Union to Baker-Butler Elementary, one of the precincts that was short, according to conversations heard over the police scanner. The people talking discussed what precincts needed ballots and how quickly they could make deliveries.

“We’re cooked when these ballots are gone,” Peter Wurzer, chairman of the Albemarle County Electoral Board, said over the scanner at around 5:40 p.m.

Secretary of the Electoral Board Jim Heilman said he did not remember a prior election where the county had to print emergency ballots.

Washburne said the county ordered ballots for 75% of active voters in the county, but that apparently wasn’t enough. He said they sent out all ballots they had in reserve and there started to be issues at precincts such as Crozet and Red Hill.

“So we had to begin making emergency paper ballots that we’d get out to the precincts as rapidly as we could,” he said. “And they will have to be hand counted when the polls close this evening.”

During a press conference, state officials said other counties, including Appomattox, Chesterfield, Floyd, Powhatan and Madison, had issues and also had run out of ballots.

Baker-Butler was in critical condition, according to the scanner conversations. Officials weren’t sure whether the 100 ballots on their way would be enough.

Despite the ballot issues, results for Baker-Butler and Free Union were in before 9 p.m. Polls closed at 7 p.m., but anyone who was in line at that time was able to vote under state law.

“We didn’t want to waste a ton of taxpayer money on ballots that were just going to go to the shredder,” he said. “I do think after this election that we might be inclined to order 100% [of active voters] for just about every election.”

Paige’s priorities for another term include the implementation of the anti-racism policy that was adopted in 2019 in order to create a school system that’s inviting to all students. He also wants to focus on addressing overcrowding the schools, building out more academies and career pathways and starting a foundation to fund items not covered in the budget.

Zackrisson started a write-in campaign in mid-August and raised $18,087 by the end of September. He made involving parents and “back-to-basics” education as focal points of his campaign, which he launched in mid-August. Zackrisson decided to run in part because of concerns raised over the summer about anti-racism lessons at Henley Middle School and the division’s new policy to support transgender and gender-expansive students.

During his campaign, Zackrisson sought to tap into parental discontent about the public school system, which were echoed by Glenn Youngkin’s campaign for governor. In a recent radio ad, Zackrisson used former Gov. Terry McAuliffe’s comments about parents being involved in schools to pitch himself as a candidate for school board who would listen to parents.

Education emerged in recent weeks as a top issue in the governor’s race with Youngkin saying he would require every school to have a school resource officer and take away the funding of those who don’t comply. Youngkin also said he would ban the teaching of critical race theory in schools. Critical race theory is a high-level academic framework that argues racism is embedded in legal systems and policies that’s not part of the state K-12 curriculum.

Albemarle County and Charlottesville removed armed police officers from school buildings during the summer of 2020.

Katherine Knott contributed to this report.

Find election results and stories about the 2021 general election below.

Ten Albemarle County precincts were short official ballots in last week’s election and had to hand-count some ballots.

An Albemarle County sheriff's deputy picks up ballots Tuesday evening at the Fifth Street County Office Building to take to precincts that were short.

Albemarle County election officials print off ballots Tuesday afternoon for the general election after running out of official ballots.