This rendering shows apartment buildings in a recently approved development proposal along U.S. 29 near Forest Lakes in Albemarle County. 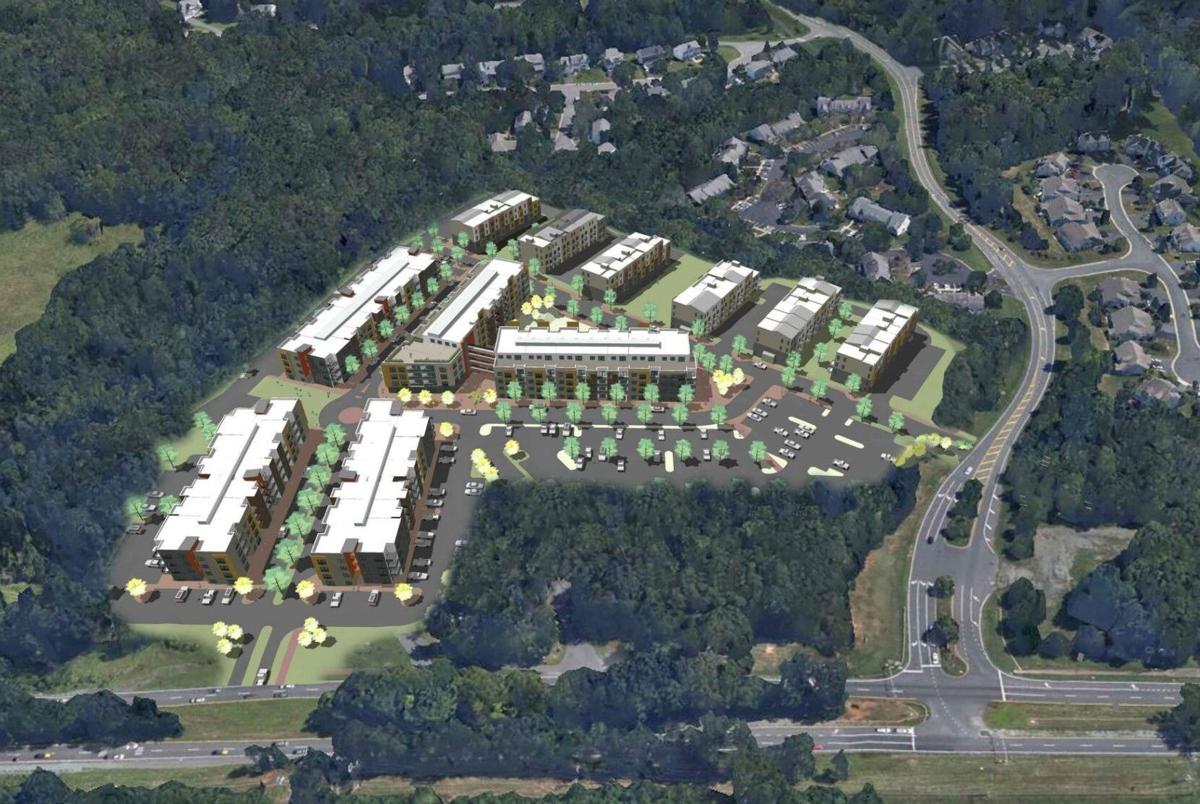 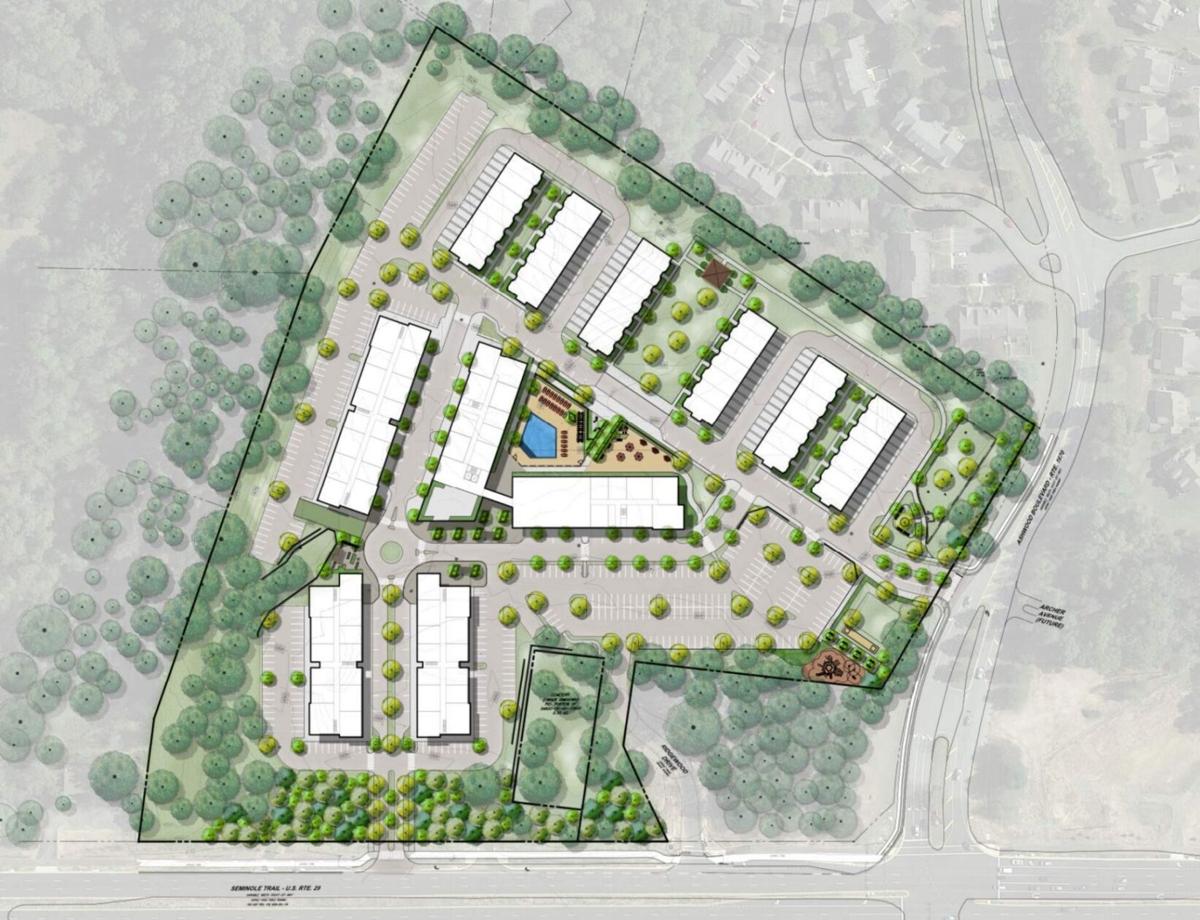 An additional 190 affordable apartments will be coming to Albemarle County.

The Board of Supervisors’ approval this past week caps more than a year of meetings about the proposal from RST Development and a coordinated opposition effort from homeowners in nearby Forest Lakes and Hollymead.

The only supervisor who didn’t vote in favor of the development was Bea LaPisto-Kirtley, whose Rivanna District includes the area where the project will be located. Wednesday’s vote to rezone a 19.5-acre property will allow the Virginia Beach-based firm to build 254 apartments and 78 townhouses.

The project will be near the intersection of U.S. 29 and Ashwood Boulevard. Neighbors were concerned about traffic, green space, schools, views and the environment.

However, this project is in an area that is marked for density in county plans along a corridor with growing employment opportunities and likely future public transit where affordable housing is needed, which is why supervisors said they support the development.

Growth in the county has been a contentious issue for years. In response to residents’ concerns, supervisors, planning commissioners and county staff have pared back developments in recent years. Despite around two hours of questioning from the board, the project remained unchanged from June’s Planning Commission support.

Seventy-five percent of the apartments, or 57% of the overall project, will be affordable rental units for 30 years.

“We talk a lot about how we’re an inclusive and welcoming place to live, and this is an opportunity to create a place for people to live that have not been able to live in our community up until now,” Supervisor Diantha McKeel said.

To meet current and future affordable housing needs, Albemarle needs to add approximately 7,507 affordable units to the housing stock by the year 2040, or 376 units per year for the next 20 years, Stacy Pethia, the county’s housing policy manager, said in a report.

Pethia said the 30-year affordability period will help to ensure affordable housing options for more than 3,400 low- and moderate-income renter households over the next 20 years, based on an average renter length-of-stay of 27.5 months per household. Due to its use of Low Income Housing Tax Credits, the project has the potential to provide rental housing to households with incomes as low as 30% of area median income, an income category currently “severely underserved.”

“In the district I represent, I have seen many failures in the actual provision of affordable units,” White Hall District Supervisor Ann H. Mallek said. “This process is so much better due to the funding as an affordable project, with a wider range of income levels, rather than a market-rate project where a few affordable units for workforce [income qualifiers] are sold one time, to a lucky buyer.”

LaPisto-Kirtley said she was concerned that two of the apartment buildings will be five stories tall and that she wanted more time for “more compromise” and “more discussions.”

“I would have liked to see more time to give the community more time to really be able to digest everything and hear what really is being proposed and offered, and to be able to ask additional questions of the developers,” she said.

Originally, RST Development proposed a maximum of 370 units, but ultimately reduced the request to 332 units. The project was deferred at a March Planning Commission meeting, where commissioners questioned the amount of green space and transit stops, and wanted more specifics about affordable housing. After some changes were made, the commission voted 6-1 to recommend approval of the request in June.

Neighbors from Forest Lakes and other Hollymead-area developments have come out against the proposal, citing concerns about road safety and traffic, school overcrowding, the height of the buildings and possible stormwater runoff issues.

“Albemarle County has a goal of providing safe and sanitary housing — approval of this development will not meet that requirement,” said George Pearsall, who lives in the neighboring Ashland Townhomes. “Building 330 apartments and condominiums on a small tract of land is not going to create a quality living area and will significantly degrade the quality of living in the neighborhood.”

The proposal includes five apartment buildings closer to the front of the development. Three of the buildings will be four stories, while two will be five stories. The townhouses at the back of the property will be two-over-two units, with one two-story townhouse stacked atop another.

Valerie Long, an attorney with Williams-Mullen who is representing RST Development, said the company plans to apply for the Low Income Housing Tax Credit program, a federal program used to help subsidize construction of affordable housing.

Albemarle currently has almost 1,000 apartments that have received funding from federal sources such as the LIHTC program, none of which is in the Hollymead area.

The property’s zoning changes from R-1 Residential to Planned Residential Development. In Albemarle’s Places29 Master Plan, which is part of the county’s Comprehensive Plan, most of the property is shown on the future land use map as Urban Density Residential, which recommends a density of between six and 34 units per acre. A small portion of the property along U.S. 29 is designated as open space.

Some community members were concerned about the project leading to school overcrowding. The staff report noted that Albemarle County Public Schools estimated that approximately 73 children could live in this development, and Hollymead Elementary and Lakeside Middle likely could handle the growth but Albemarle High School is already overcrowded.

The county school division’s Long Range Planning Advisory Committee recently recommended that a new elementary school be built in the northern feeder pattern, which this project is in. Albemarle already has a potential elementary school site in the Brookhill development that was given by the developer as part of the agreement to get a rezoning of the 277-acre site.

The committee recommended that the School Board move forward with the long-planned $32 million high school center that was paused during the COVID-19 pandemic, to help address current and projected capacity issues at the high schools.

Three potential options for transit stops are proposed in the project. While there is not currently a bus route near the parcel, an ongoing feasibility study and implementation planning effort is looking at expanding transit service along U.S. 29 north of Charlottesville.

According to the county staff report, a traffic study recommended lengthening the left-turn lane from U.S. 29 onto Ashwood Boulevard to accommodate the increased traffic, and RST is proposing to install the expanded turn lane. A left-turn lane on Ashwood eastbound also is proposed.

Kevin McDermott, an Albemarle planning manager, said the difference between the developer’s analysis and the Forest Lakes analysis was that the association used different vehicle trip numbers in its modeling.

The traffic study commissioned by the developer was for 375 multi-family homes, while the Forest Lakes study used single-family home traffic numbers, according to documents on the association’s website. The industry standard uses higher vehicle trip generation rates for single-family homes because they are typically the largest home type in size and have more residents and more vehicles per home.

McDermott said the addition of more trips “would be more on the scale of over 550 units in that development.”

“That’s a pretty significant increase, and we don’t really see any reason for that … we just don’t see that being possible,” he said.

Supervisor Ned Gallaway questioned what would happen if the “worst case” did occur, and McDermott said the state possibly could adjust the signal timing on Ashwood Boulevard.

Gallaway said public transportation and school capacity are “two big problems that us, the supervisors, need to take on.”

“This is big-picture stuff when it comes to how we’re expending funds, and then what we’re doing tax rate-wise, and schools and transit are needed in this area of the county,” he said.

County staff said a joint Capital Improvement Program meeting will be happening with the School Board and Board of Supervisors in October, where long-term and nearer-term capital projects will be discussed.

“I hope folks will stay attentive,” Gallaway said. “Sometimes we’re very attentive when projects pop up in our quick, immediate neighborhoods, but those bigger items, stay attentive to it and put your feedback in there, as well.”

Commissioner Rick Randolph cast the lone dissenting vote, citing the need for a pedestrian crossing at U.S. 29 and transit issues, as well as concerns about road and amenity maintenance costs.

Forest Lakes-area development proposal scaled back, but some still concerned

“I still look at this, and I feel like if I were a neighbor, I feel like I'm trying to put eight pounds of potatoes in a five-pound bag.”

Forest Lakes-area residents brought fight against development to another level

“The objective was to send the developer back to the drawing board to start over, since there were so many deficiencies in the proposal, and that was accomplished.”

Rezoning for proposed development deferred after outcry from Forest Lakes

RST Development said 75% of the 370 proposed units would be affordable housing for 30 years.

A mix of townhouses and apartments, the development would occupy land currently home to Ridgewood Mobile Home Park.

How Groundhog Day is connected to astronomy

How Groundhog Day is connected to astronomy

Pregnant panda! Watch as this giant panda gets an ultrasound

Pregnant panda! Watch as this giant panda gets an ultrasound

This rendering shows apartment buildings in a recently approved development proposal along U.S. 29 near Forest Lakes in Albemarle County.