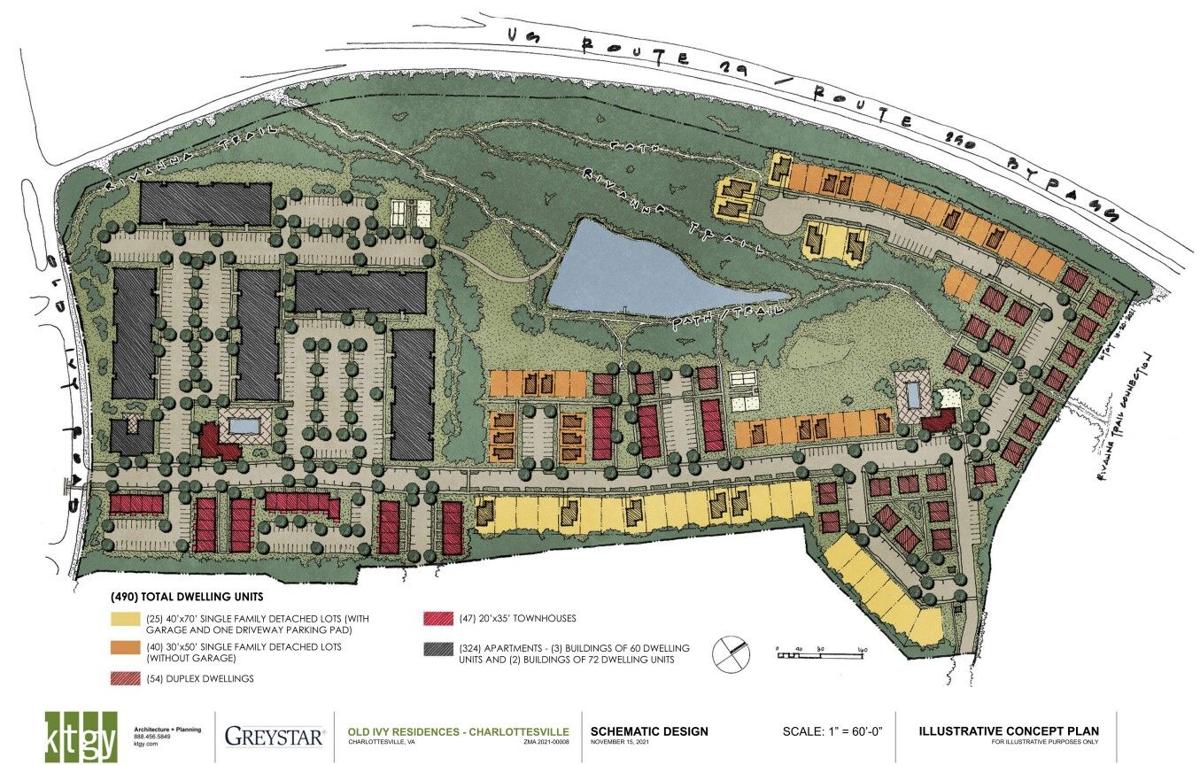 A sketch of the submitted request to build units on Old Ivy Road. 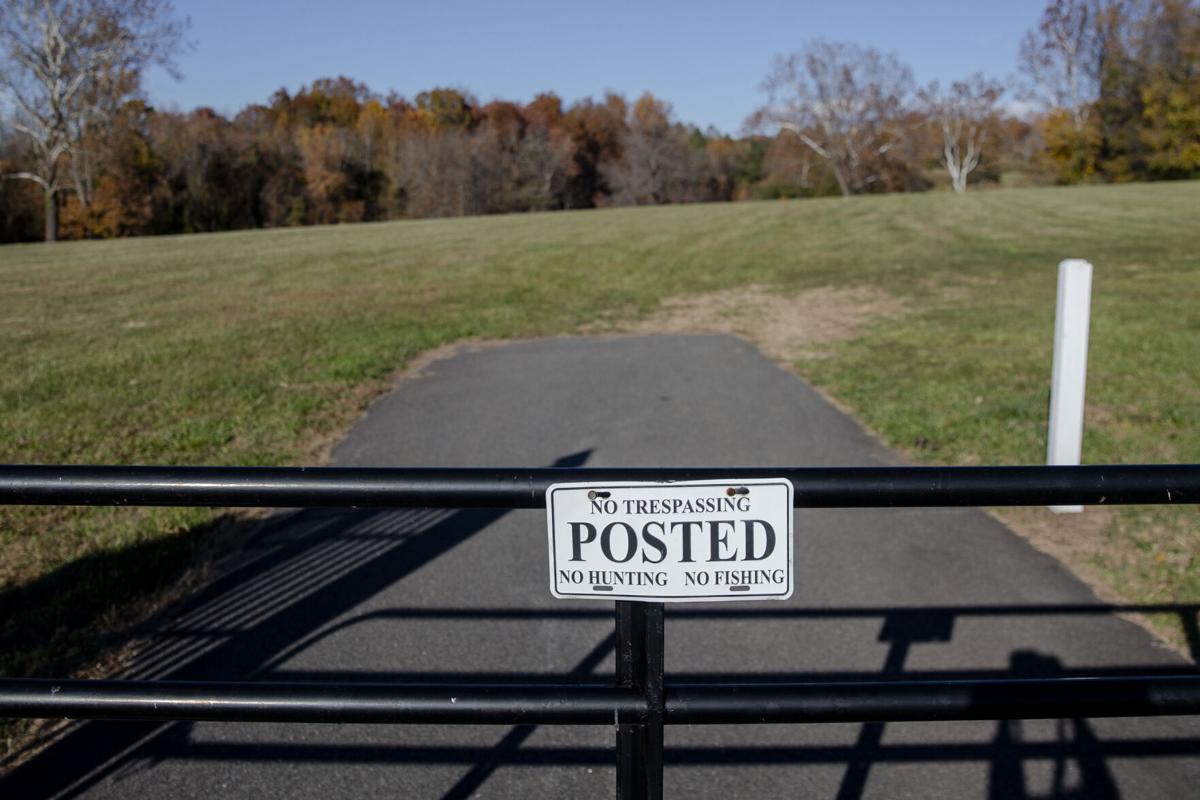 A “No Trespassing” sign hangs on a gate at 2454 Old Ivy Road. A developer has submitted a request to build single-family detached houses, townhouses and apartments on the site.

A developer wants to build 490 homes on about 36 acres near the U.S 250/29 Bypass on Old Ivy Road in Albemarle County, but some residents are concerned about longtime safety issues on Old Ivy, especially the railroad bridge underpass at the east end of the road.

Greystar, a rental housing development and property management company headquartered in Charleston, South Carolina, is the contract purchaser of the properties, and currently wants to build a maximum of 525 homes. It has submitted a proposal for 490 homes called Old Ivy Residences, which includes 65 single-family detached houses, 47 townhouses, 54 duplexes and 324 apartments, which would all be rentals.

The company is requesting a rezoning of the 35.4 acre property made up of five parcels to make all the parcels R-15, which would allow up to 15 units per acre. About 28.3 acres of the property are already zoned R-15, but the developer wants to remove requirements associated with prior approved rezonings on some of the parcels.

John Clarkson, a managing director for Greystar Development Services, said the company is trying to address an issue it’s seeing across the country.

The project proposal was discussed Monday evening at a community meeting held during the Places 29 Hydraulic Community Advisory Committee meeting. During the meeting, neighbors expressed concerns about the increase in traffic onto Old Ivy Road. They also expressed concern about the railroad bridge underpass at the east end of the road, which narrows and has flooding issues, and also the lack of sidewalks in the area.

“The pedestrians at that end of Old Ivy Road put their lives in their hands when they cross under that bridge,” said Kathleen Jump, who lives in nearby Huntington Village. “I know that [the Virginia Department of Transportation] has been out and looked at that bridge this year because of concerns that have been brought to their attention … so there is a lot of attention focused, but I don’t think there are expedient solutions, or simple solutions or anything but very expensive solutions.”

Lyle Hallowell, who lives in University Village, a condominium of people who are 55 or older next to the site, said drivers take turns at the underpass because it’s so narrow.

“Non-locals go through there at high speed, and I’ve seen that happen not only with two cars but also with pedestrians under there — very dangerous conditions,” he said. “That somehow has to be addressed no matter what, regardless of what happens with the development.”

After submitting an initial application in August and receiving the first round of comments from county staff in September, Greystar deferred the application and then submitted an updated version on Monday.

The updated submission also included a draft proffer statement, which includes that the property owner “will relocate and establish the portions of the Rivanna Trail located on the property” at the county’s request at least nine months after the first certificate of occupancy is issued; will contribute up to 6% of the total cost of the future transportation improvements up to $500,000; and that property must be developed in general accord with a concept plan that was submitted.

“The applicant is asking us to evaluate that and make a recommendation as to whether the corridor has been improved to that extent,” he said.

One of the properties is also subject to another rezoning from 1996, and Greystar is asking to be released from those use requirements.

Kevin McDermott, a county planning manager, said VDOT has a consultant performing a study on both ends of Old Ivy Road. The consultant is looking at pedestrian and traffic issues and trying to come up with an option that the county can make a grant funding submission for in 2022.

“We’ll keep you all informed about the options, it’s just that right now, we haven’t gotten anything that we think is going to solve the problem with a reasonable amount of money,” he said.

A project to replace the existing structurally deficient Old Ivy Road bridge over the U.S. 250/29 Bypass is scheduled to start in 2024.

Valerie Long, an attorney with Williams-Mullen who is representing Greystar, said it is willing to build a right-hand turn lane along the front of the property.

“We’re not in a position to be able to make any of those off-site improvements, but Greystar is willing to help contribute to some of the future solutions on a proportionate basis as well as make improvements on site within their control, as recommended by the traffic study,” she said.

In Albemarle’s Southern and Western Urban Neighborhoods Master Plan, which is part of the county’s Comprehensive Plan, more than half of the property is shown on the future land use map as parks and green systems, while the rest is shown as urban density residential, which recommends density of between six and 34 units per acre.

Public hearings for the proposal before the Planning Commission and Board of Supervisors have not yet been scheduled.

In a historic move, the Charlottesville City Council on Monday night voted unanimously to approve the revised Comprehensive Plan and Future La…

Albemarle County will soon begin the first comprehensive review in 20 years of its policy and regulations that govern cell towers.

Former Charlottesville Police Chief RaShall Brackney has filed a discrimination complaint against the city with the U.S. Equal Employment Oppo…

Ten Albemarle County precincts were short official ballots in last week’s election and had to hand-count some ballots.

A sketch of the submitted request to build units on Old Ivy Road.

A “No Trespassing” sign hangs on a gate at 2454 Old Ivy Road. A developer has submitted a request to build single-family detached houses, townhouses and apartments on the site.