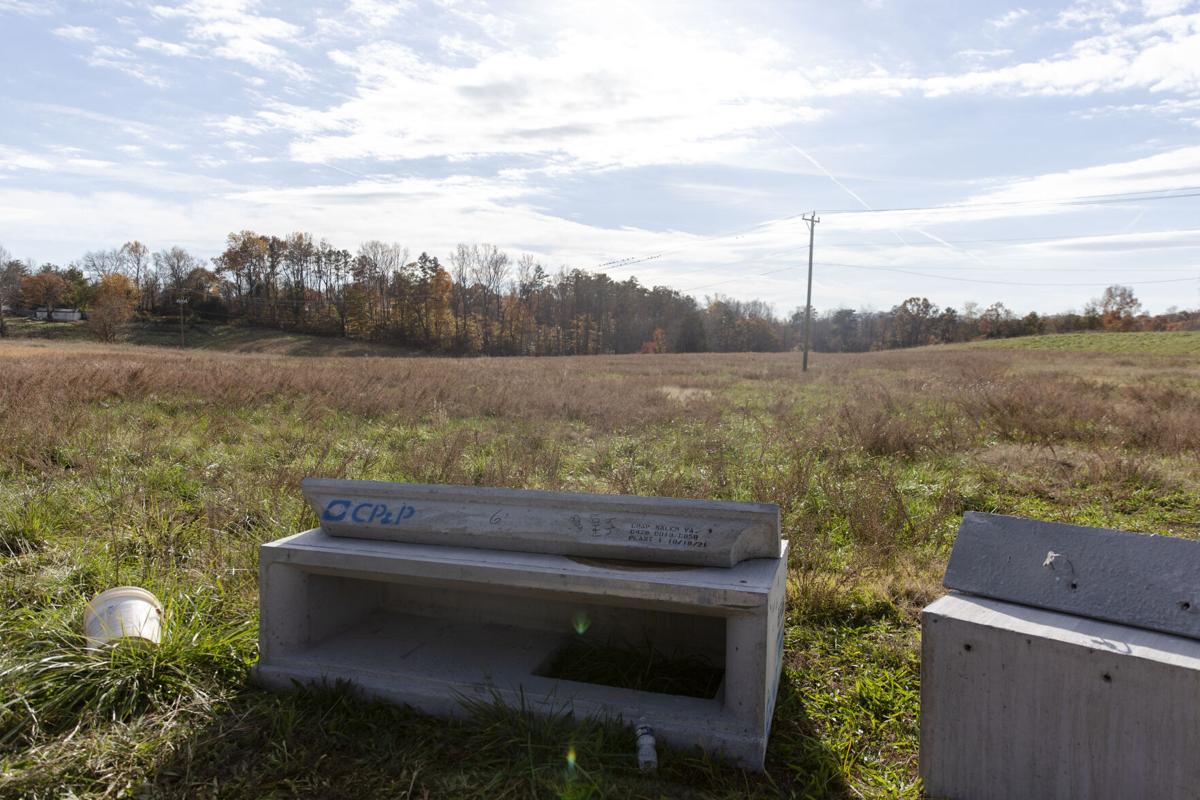 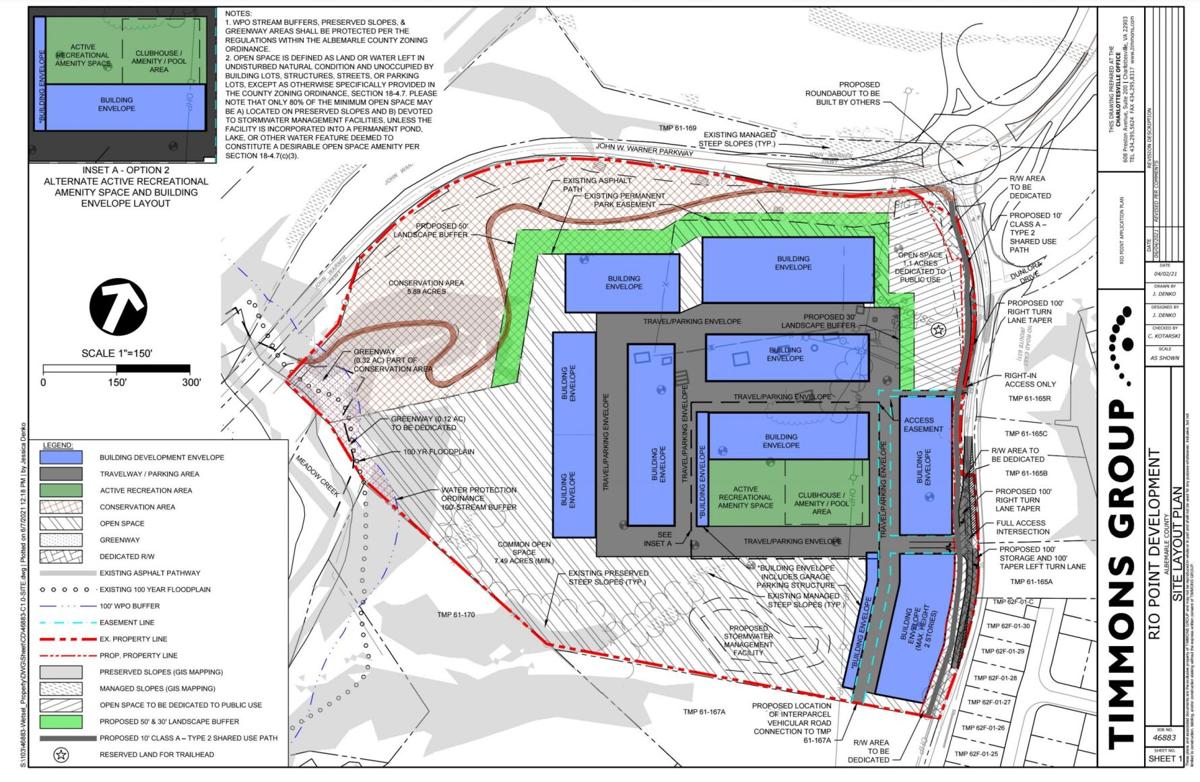 A 328-apartment project at the intersection of the John W. Warner Parkway and Rio Road in Albemarle County was approved late Wednesday night, after three years of detours and delays.

The Board of Supervisors voted 5-1 in favor of a rezoning application for a development called Rio Point, formerly called Parkway Place, to change the property’s zoning from R-4 Residential to Planned Residential Development.

Supervisor Ned Gallaway, who represents the district where the project is located and lives in nearby Dunlora, a nearby subdivision containing mostly single-family detached homes, cast the lone no vote. He cited an on-going corridor study of Rio Road — of which the second phase is starting soon — that is not yet finalized.

“If I had my perfect world, that corridor study would be complete, and this process and this application would go back before the Planning Commission so that they could consider this project with the input and information from the corridor study,” he said.

The proposal has been moving through county processes since 2019. The Board of Supervisors accepted a deferral request from the original developer, Kotarides Developers from Virginia Beach, in June 2020, when the board was seeming split 3-3 on the proposal known as Parkway Place. A tie vote would’ve denied the proposal.

At that time, Gallaway, as well as Supervisors Ann H. Mallek and Donna Price, were concerned about the proposal’s increased traffic, and cited a yet-to-be-funded corridor study of Rio Road that has been discussed for years but not completed.

The corridor study was funded shortly after the deferral and is currently underway. A roundabout at Rio Road and the John W. Warner Parkway was also awarded state funding in the Virginia Department of Transportation’s Smart Scale process earlier this year. At this point, construction is not scheduled to begin until 2026.

Mallek said she had concerns with unaddressed transportation issues when Parkway Place came before the board.

“I have seen a lot of transformation from the former project to this new one that made me much more supportive,” Mallek said. “ … The location, the reduced environmental impact because of its central location to where our real population core is in the county, is really what has swung me to be supporting this project.”

Price, who later expressed regret at her own lack of support of the original project in 2020, said this project was better due to an increase of 3 acres in open space, among other things.

“When you look at this location in the development area, basically right next to Charlottesville, it is the ideal location for this,” she said.

Rio Point LLC purchased the 27.3-acre property from the Wetsel family for $7.5 million in January of this year. Chris Henry, president of local development company Stony Point Development Group, then pursued the rezoning application, and at a community meeting earlier this year said that the LLC is a group of investors led by Stony Point.

While the Rio Point project is very similar to the Parkway Place proposal, there are some differences, county staff said. There is a consolidation of two of the apartment buildings, which is allowing for additional internal greenspace. Also, Parkway Place was going to build a “green t intersection,” but Rio Point offered $750,000 to go toward the roundabout project.

Residents of Dunlora, and the more recent developments Dunlora Park and Dunlora Forest, spoke out against the proposal again Wednesday night, citing traffic concerns and concerns about how apartments will fit in the neighborhood.

“The requested rezoning of R-4 to Planned Residential significantly changes the neighborhood impact and the neighborhood residential nature of the properties that adjoin this development,” said Sandi Cohen who lives in Dunlora Park. “The Rio Point is directly across from Dunlora Park, Dunlora Forest, Dunlora and Shepherds Ridge. All of them are single family dwellings, villas or townhouses but … other than Dunlora, they are all relatively small developments.”

Calling it a “monstrosity” and “unneeded apartments,” many said that the board should let this be developed by-right, or without approval from the Board of Supervisors, at the R-4 zoning.

“What would be great for affordable housing would be to respect the current R-4 zoning of this property and build houses that are affordable to families and middle income workers,” said Donna Lombardi, who lives in the area. “We absolutely do not need more half-a-million-dollar houses, but we do need more reasonably sized reasonably priced housing. Perhaps there’s a developer out there who’s committed to really helping the community by building houses or villas that the average working person can actually afford to buy.”

Three people spoke in favor of the project, citing its proximity to the city and a possibly smaller environmental impact in comparison to housing developments that are located further out in Albemarle.

“While the location is generally walkable, there is no denying that the proposed project will generate additional vehicle trips along the adjoining roads,” said Rex Linville, the Albemarle/Greene County Land Conservation Field Rep for Piedmont Environmental Council. “That said, this site is about as central to Charlottesville as possible while still being in Albemarle County, and having these trips originate adjacent to the urban core is preferable to having them originate further out along Rio Road, the [U.S.] 29 corridor, or beyond.”

In the Places29 Master Plan, which is part of the county’s Comprehensive Plan, the property is shown on the future land use map as predominantly Urban Density Residential, which recommends between six and 34 units per acre, while other parts of the property are designated as Neighborhood Service Center or public and private open space.

The Master Plan was adopted in 2011, and the Places29 Rio Community Advisory Committee, which provides input on development in the area, has asked for the Master Plan to be updated.

If the property is developed by-right, county staff said that up to 109 dwelling units would be allowed before bonuses, and a developer could build up to 163 units if the land were to be developed as a cluster development.

The board of supervisors approved an updated affordable housing policy in July, but new affordable housing requirements and definitions — including that rezonings/special-use permits have 20% affordable housing, as well as changes to unit prices and extended periods of affordability — have been delayed until developer incentives are approved.

When asked why Rio Point didn’t include the new policy — 20% of units affordable to those who make 60% of AMI for 30 years — Henry said the investors couldn’t afford it.

“It would not be possible for us to achieve those thresholds with this project at the price that we paid for the land,” Henry said. “We would have either negotiated differently there or proposed additional density to compensate for the additional affordable housing units. And as you’ve heard tonight, the additional density is something that I think is very problematic for the surrounding community.”

Some Dunlora residents argued during the public hearing that the application wasn’t legal, and one, Brent French, said it “may be an issue for the courts to decide later.”

“Under state law, either a contract purchaser with the owner’s consent or the owner of the property or the owner’s agent are all proper applicants for a rezoning,’’ Kamptner said. “So Rio point is clearly a proper applicant. The board has an application that has been processed, public hearings have been noticed and it’s before the board tonight.”

A public hearing to discuss a proposed apartment complex on Rio Road at John W. Warner Parkway has been postponed.

Calif. bill would lower age of consent for vaccine

Calif. bill would lower age of consent for vaccine

This beautiful and personal Michelangelo piece has finally been restored

This beautiful and personal Michelangelo piece has finally been restored