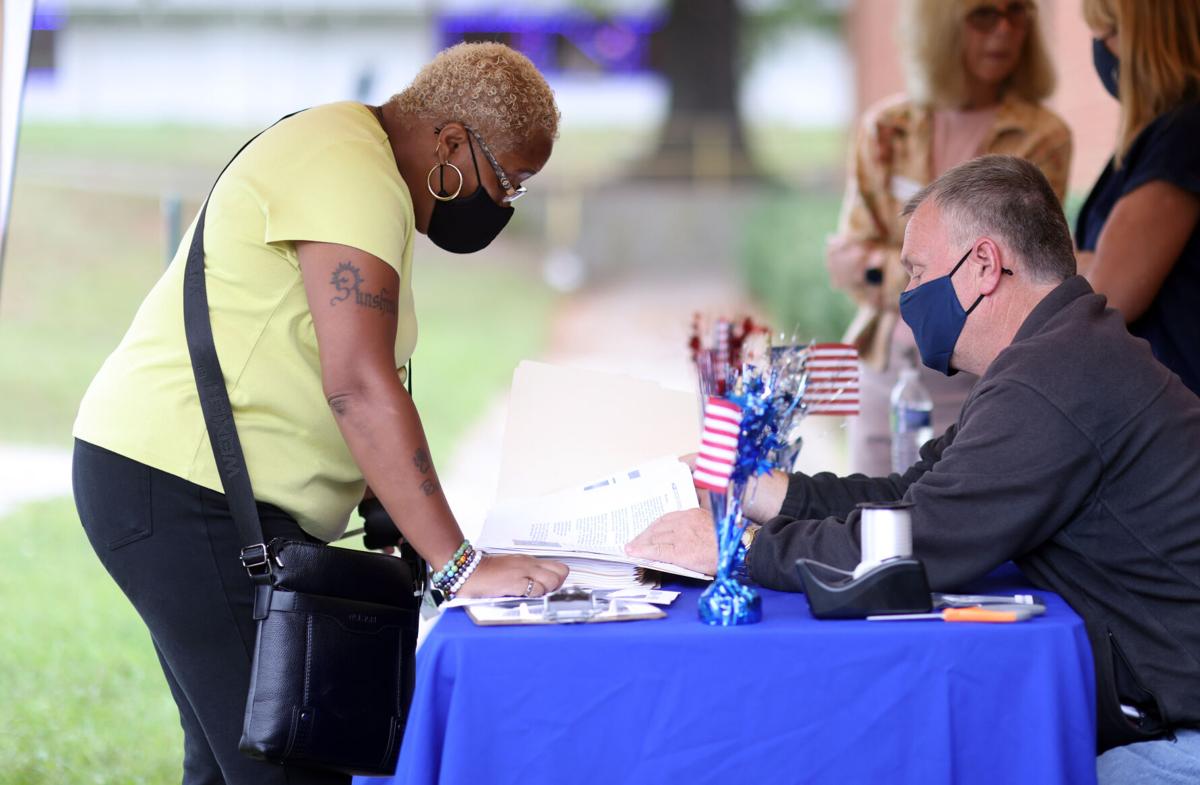 Corrine Frazier (left) gets information from Postal Manager Gary Powell (right) during a job fair held outside the Charlottesville Post Office. Officials were encouraged by the number of people who attended the event. 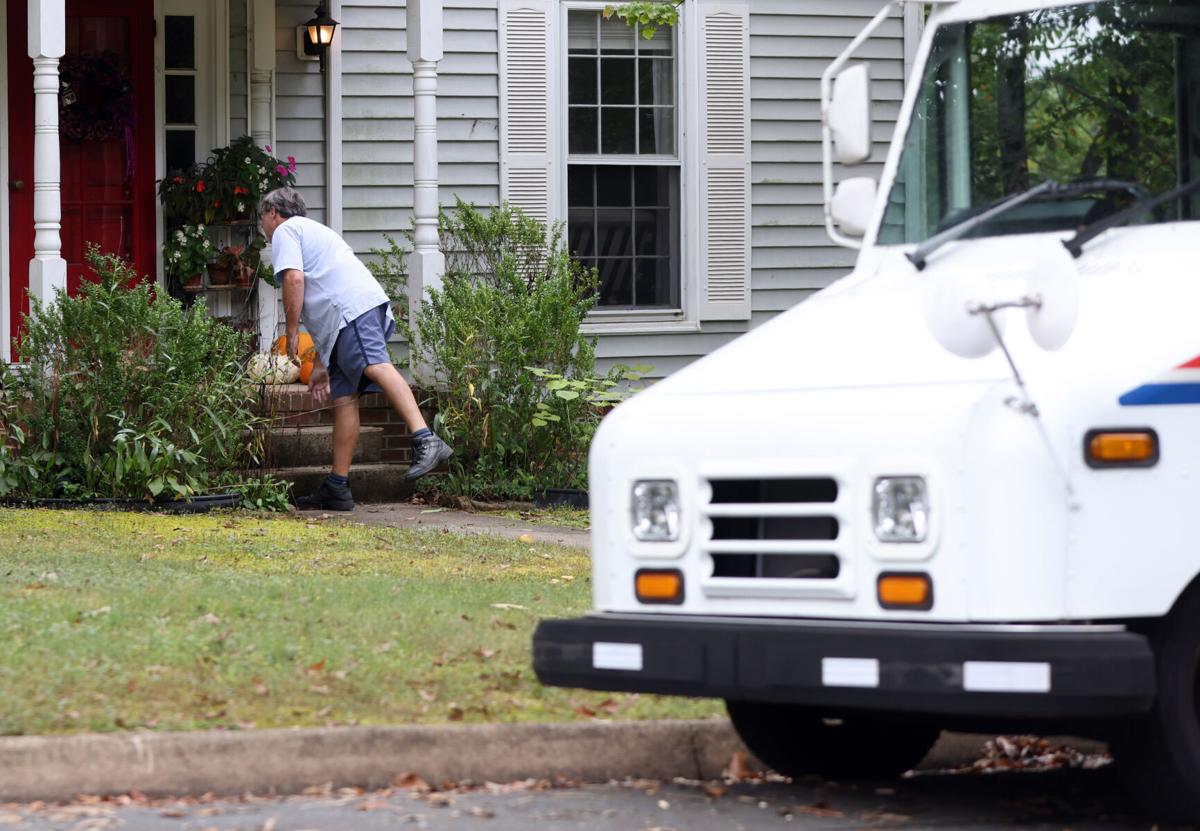 Two former Charlottesville Post Office mail carriers say chronic understaffing and poor management are on-going issues that may contribute to chronic mail delays for the area, and an expert who follows postal problems said that postal service data may not be accurately capturing the extent of the mail problem in Charlottesville.

Postal service nationwide has been slow this last year, but the Charlottesville area’s delivery problems have grown worse over time, with many residents reporting that they’ve gone weeks without receiving any mail at all.

A surge of carriers on Oct. 2 and 3 brought many residents long-awaited mail, but many more said the surge did not help at all and they worry about the long-term solutions. The U.S. Postal Service has not given specifics about what is causing the delays, other than staffing problems due to the pandemic. USPS spokespeople several times have told The Daily Progress that no one in charge of decisions or possible solutions was available for an interview.

Without information from the USPS about what specifically is causing the problems and what the USPS plans to do to remedy them, it is hard for residents to know where to turn for answers, much less their mail.

A former city carrier who asked their name not be used for fear of retribution, said they think the post office needs about 15 additional carriers to cover the city limits.

“They do not and have not created a great work environment in the way you’re treated in general,” the former carrier said. “The training that you get, in my opinion, is not not what it should be. You’re just thrown to the wolves, basically.”

Jeff Anker, a retired city letter carrier who is still active as the city carrier union treasurer, said he thinks the local post office has been understaffed for more than a decade. He said inspectors underestimate how many routes are needed, which in turn underestimates how many carriers are needed.

“Basically, it comes down to the people that are leading the inspection team, if they can come in and show that Charlottesville really doesn’t need the 50 routes that it’s got, that if you get by with 45 routes, if they move streets around, once they really look at the data, then they’re saving, on paper, the post office money,” Anker said. “So it makes their bosses happy, but what they’re actually doing is they’re making it impossible for the carriers to carry their routes in eight hours.”

U.S. Sen. Mark Warner, who came to the Charlottesville main post office on Aug. 23 to bring attention to the late and non-delivery of mail, said he’ll come back again before the end of the year. Warner was the one who notified residents about the mail surge, when 55 extra postal carriers were delivering mail on Saturday, Oct. 2 and 63 were dispatched Sunday, Oct. 3. In an Oct. 5 virtual press conference, Warner said the problem in Charlottesville is “enormous.”

“We got some relief for part of the community, but this problem that has been frankly all over the Commonwealth, but particularly centered in Charlottesville, is something I think I’m going to have to revisit,” he said on another call Thursday call with media.

“They took all of the hampers of packages that hadn’t been delivered — and at this point, this is probably like 50 to 60 hampers or more — they pushed them all outside into the parking lot into the walkways outside so he wouldn’t see them,” the former carrier said. “They got all the mail that was piled up at the cases, stacked up trays and tubs of mail, and put it in the back of a trailer at the loading dock so he wouldn’t see it when he went through there.”

Across the country, post offices in Jackson, Wyoming, Kennebunkport, Maine, the Baltimore area and Provincetown, Massachusetts, have reported staffing issues this year, according to local news outlets. Yet it is hard to know if their problems rival those in Charlottesville.

Steve Hutkins, a retired English professor at New York University, has been following the postal service for years and documents information on savethepostoffice.com. Hutkins said he’s been reading about the problems in Charlottesville. Usually the problem with mail delays is a matter of a couple of days, he said. But in Charlottesville, people have reported delays of weeks, and postal service data is not capturing the problems.

Sometimes, Hutkins said, on-time scores across the country have been as low as 60% or 70%. But with an extra day or two, about 95% or more is on time. The rest comes soon after.

“[Those scores] are not normal in the sense that scores have been below average since April 2020 across the country, but not nearly bad enough to reflect the horrible service they’ve been experiencing [in Charlottesville]” he said, via email. “That’s just not showing up in the data for some reason.”

The U. S. Postal Service Office of Inspector General conducts audits of post offices and other USPS facilities. According to the OIG, the office uses data analytics, risk models, tripwires and other methods to identify potential risks and determine postal service locations to audit. It has not specifically audited the Charlottesville Post Office in the past three years, a representative with OIG said in an email.

Philip Bogenberger, a USPS spokesperson based out of Charlotte, said no one in the area was available for an interview about issues at the Charlottesville Post Office.

In an emailed statement, Bogenberger said due to the COVID-19 pandemic “staffing was occasionally impacted in some areas, including Charlottesville.”

He said the American Rescue Plan Act provides postal employees with up to 600 hours of Emergency Federal Employee Leave, and employees in the city of Charlottesville have used 500 hours of EFEL, equating to 62.5 lost workdays.

USPS is hiring additional personnel and assigning carriers from around Virginia to surge delivery of any backlogged mail with a “hyper-focus on election mail,” Bogenberger said. He did not specify how many openings the Charlottesville office has, nor how many carriers are working during surges or how often they will happen.

“Recently posted positions in Charlottesville have closed,” he said. “Some positions have been filled already, and we are in the process of evaluating and hiring qualified candidates for other vacancies. Any positions not filled will be reposted on usps.com/careers.”

The USPS is overseen by a nine-member board of governors appointed by the President. That board then selects the U.S Postmaster General, who is currently Louis DeJoy.

During a call with the media last week, U.S. Sen. Tim Kaine said that he thinks the board needs to be reformed. He said that President Joe Biden is replacing board members to get a more responsive board in place.

“I actually think the postmaster should probably be a senate confirmable position,” Kaine said. “To not let the Senate have oversight over the operations of the post office, including the performance of the postmaster, that was done a while ago, but I think it’s probably time that we make that position not one that reports to a board but that’s a senate confirmable position like other cabinet secretaries and agency heads.”

Kaine has signed on to the Postal Service Reform Act, which would eliminate the requirement that the USPS pre-fund its health benefits for retirees and integrate their health care with Medicare, as well as require the publication of weekly service data on the Postal Service website, as well as issuing a detailed report to Congress every six months on USPS finances and operations.

The local post office and Postmaster General Louis DeJoy need to be more transparent, Warner said in a 45-minute call. "This is what drives me crazy."

After mail 'surge' many worry about the long-term issues

Did you get mail during the weekend's surge? Some people in Charlottesville said they got several mail deliveries, while many said they came up empty-handed. Sen. Mark Warner plans to address the continuing mail problem Oct. 5 in a virtual news conference.

U.S. Senator Mark Warner said USPS is assigning additional mail carriers from around the state to Charlottesville this weekend “for a temporary surge to resolve the backlog of mail in the area.”

“I've been getting many more complaints about mail delivery in Charlottesville by far than anywhere else in the commonwealth.”

Area mail delivery only seems to be getting worse

Some area residents said recently that they had not received regular mail delivery in days, or even weeks.

But it's unclear how accurate the data is, as local registrars are reporting different numbers of total ballots sent, and the company collecting the data already notes potential scanning issues with USPS.

Could there be a HIV vaccine soon?

Could there be a HIV vaccine soon?

Corrine Frazier (left) gets information from Postal Manager Gary Powell (right) during a job fair held outside the Charlottesville Post Office. Officials were encouraged by the number of people who attended the event.