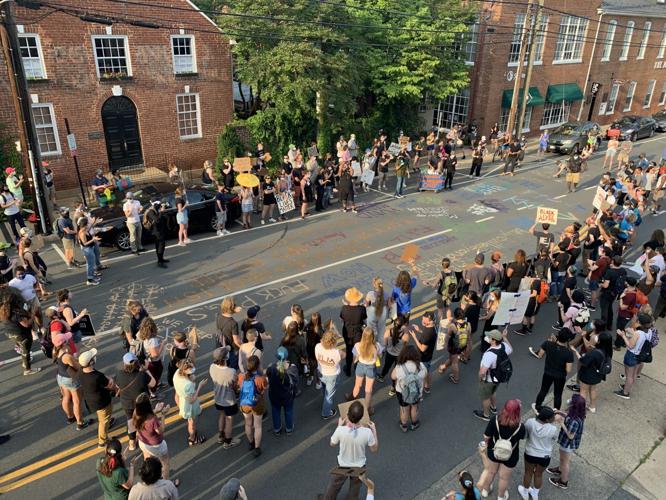 People gather outside of the Charlottesville Police Department during a Black Lives Matter protest in June 2020. 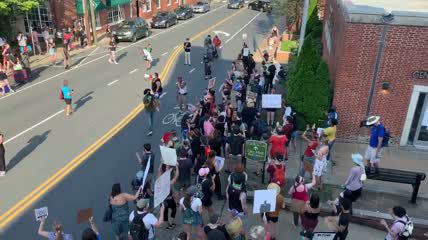 People gather outside of the Charlottesville Police Department during a Black Lives Matter protest Sunday.

More than 100 people marched down the Downtown Mall Sunday to call for defunding area police departments, in the fourth weekend of protests since George Floyd’s death in Minneapolis May 25.

Protesters stopped at the patios of open restaurants and encouraged patrons to join them in the march.

They also called for people to contact businesses that support the Charlottesville Police Foundation, an independent nonprofit that supports the department, and ask them to reconsider donations.

“If your business is supporting the Charlottesville Police Foundation, please note that you are going to have a full inbox in the morning,” said Ang Conn, who led the march down the mall with a megaphone.

She said that nobody should be celebrating Father’s Day while Black people are being murdered. A former Minneapolis police officer has been charged with murder in Floyd’s death; activists also have called for similar charges to be brought against officers who fatally shot a Kentucky woman, Breonna Taylor, in another recent incident.

“You can all sit around in your privilege,” Conn said. “While you’re enjoying your ice cream and snacks, please remember that some Black and brown folks do not have that luxury today.’

The march, which started at the Free Speech Wall, went down the mall to Second Street North West and down Market Street to the Charlottesville Police Department.

Community organizers blocked the mall crossovers with bicycles, and Market Street with bicycles and vehicles, and redirected traffic around the march.

Nearly every person at the march wore a mask.

There was no visible evidence of a police presence. Last weekend, activists complained about the presence of Virginia State Police troopers using Charlottesville city vehicles.

Outside the police department, Black community members used the megaphone to share their experiences and called for change.

One person called for a stronger Charlottesville Police Civilian Review Board. The board is scheduled to have its first meeting later this month.

On Market Street, people used colorful spray paint to write “Black Liberation Now,” “Defund and Abolish CPD, APD, UPD,” and other phrases onto the pavement in front of the police department.

“Hey, hey, ho, ho; these racist cops have got to go,” the crowd chanted.

CPD wants to charge four with vandalism over spraypaint protest

Police said that warrants had not yet been served at the time of the statement, and that names would not be released until all warrants have been served.

Charlottesville has no plans to repave after spraypaint incident, despite obtaining cost estimate

Charlottesville has no immediate plans to repave a section of Market Street, city officials said this week.

Cry to defund police has many meanings for local officials, advocates

From disbanding departments to changing priorities, plans for reform are varied

Biden: WH 'on alert and in action' on Hurricane Ian

Biden: WH 'on alert and in action' on Hurricane Ian

People gather outside of the Charlottesville Police Department during a Black Lives Matter protest in June 2020.

People gather outside of the Charlottesville Police Department during a Black Lives Matter protest Sunday.