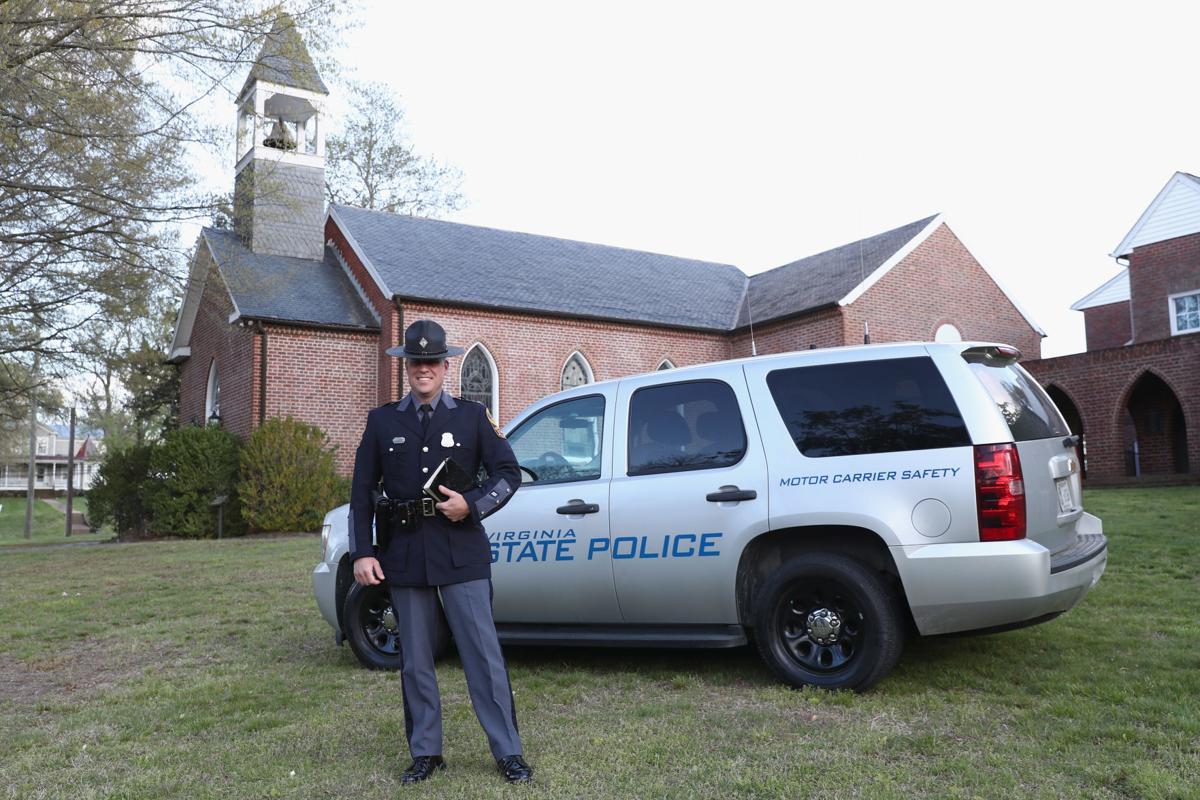 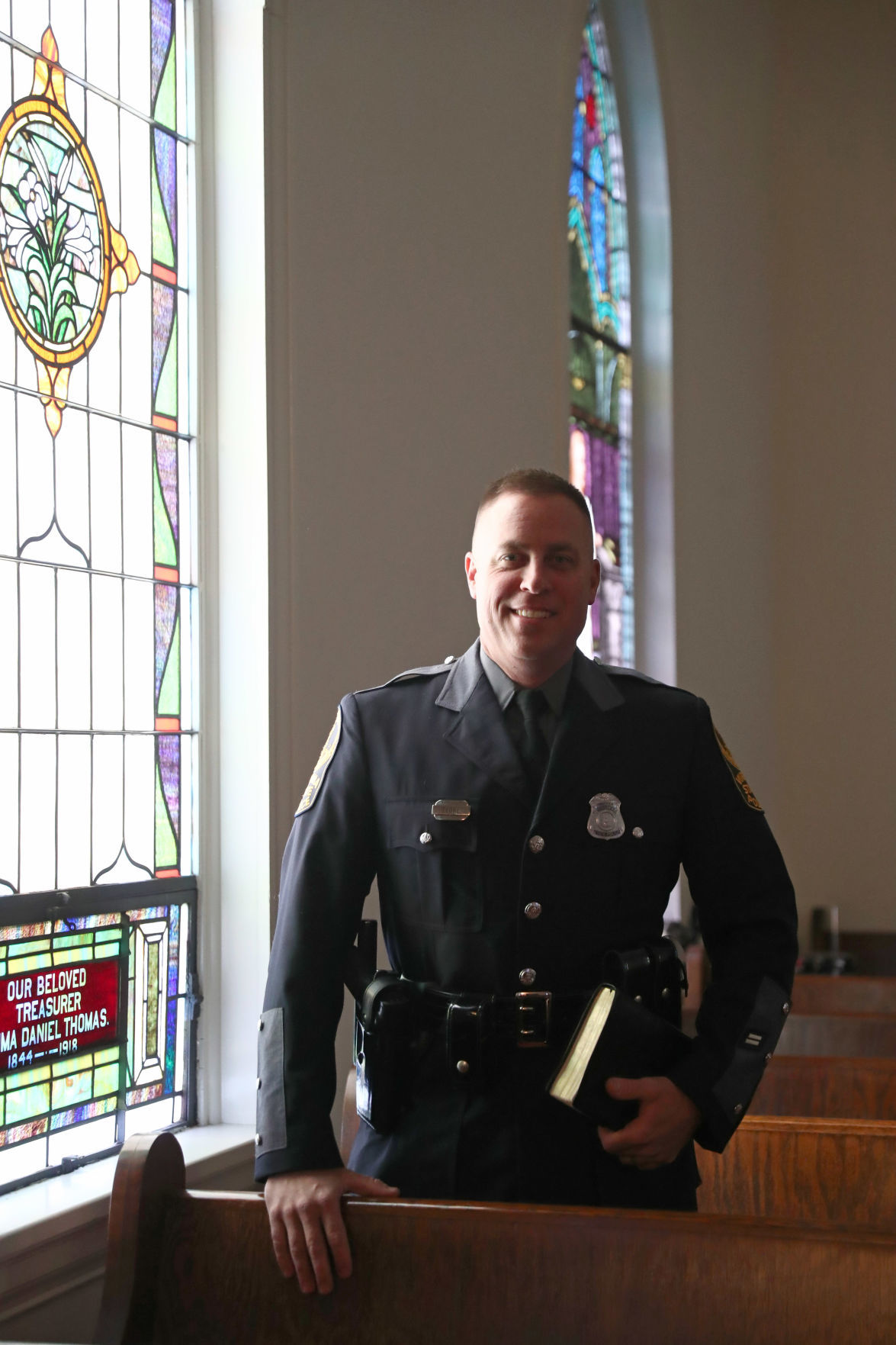 When Anthony Clore puts down his badge and picks up his Bible there is no sudden transformation or personality switch.

It’s simply the veteran Virginia State Police trooper continuing his effort to help others, albeit in a different uniform.

Senior Trooper Clore is a motor carrier safety officer in charge of enforcing the rules and regulations on commercial vehicles in the area around Fluvanna County. He’s also the pastor of Fork Union Baptist Church in his native county.

The mix of vocation and avocation is natural for Clore.

“I always wanted to be in law enforcement and my father was in law enforcement so it really wasn’t a difficult decision for me. It was kind of natural,” Clore said. “I also grew up in church and learned the teachings of the Bible and loved the Lord and have always had a relationship with my Savior. But about 10 years ago, when I became a dad, I decided I need to get more back into church.”

With the COVID-19 pandemic keeping people at home per Gov. Ralph Northam’s orders, there won’t be many people going into church this Easter. Clore will record his Easter sermon for electronic dissemination to his congregation.

It’s a little different, Clore said, but the method provides opportunities to take belief into the home.

“It’s been a challenge because my personality is to preach the word, encourage people and challenge them and reach out to them. It’s different to pick up a Bible and a microphone and stand up and preach to nobody but the recorder,” he admitted.

“The truth is that it’s not really about what’s in front of me. It’s about doing what I can with what I have right now to help people,” Clore said. “It’s been just as hard on them because church is that place where people go to see their friends, maybe get that hug that they need or a handshake and be a part of something, to feel they belong.”

Clore hopes that the social distancing and shut-down of religious services and public gathering places will encourage people to take their religion home with them.

“It’s an opportunity to realize that the church is not confined to a building,” he said. “It’s inside all of us.”

That belief is what got Clore out from under the wheel of his cruiser and back behind the pulpit. As a new father, he began reading the Bible and praying at home, which then led Clore to go back to church. Getting back into church led him to getting involved in services. Getting involved in church services led him to deliver sermons.

That then took him to other churches as a visiting preacher and a modern circuit rider, a pastor who regularly moves from church to church.

Two years ago, he arrived at a permanent gig as the full-time pastor of Fork Union Baptist Church.

It wasn’t exactly what the career police officer had in mind. But when he was moved from patrol to the motor carrier division, his hours on the road changed and he found himself with more time on Sunday to spend with a congregation.

“I didn’t set out to do it, no, but I started realizing that this was an important part of my life and something that I was being called to do, but it wasn’t easy. I finally had to accept that this is what I was supposed to do,” he laughed.

“As much as I was trying to run from it, I knew He was calling me. When I moved to the motor carrier unit, it was just a big example of how all of this was coming together,” he said. “It was more than coincidence.”

There are no real conflicts between the careers, Clore said. Both jobs are simply matters of taking care of people.

Recently, the duties came together when some members of his church and the Fork Union community got together to sew cloth face masks for medical providers.

The masks now are recommended wear for all people in the U.S. walking out and about in the time of pandemic, but are especially important for medical workers.

Although not technically proper personal protection equipment, homemade masks may be worn by hospital staff and physicians when not in a clinical setting.

The Centers for Disease Control and Prevention recommended wearing one after preliminary studies showed that SARS-CoV-2, the virus that causes COVID-19, may be spread simply by talking as well as sneezing and coughing.

When area residents started sewing, Clore became the go-between to get the finished products to the University of Virginia Medical Center and Sentara Martha Jefferson Hospital.

“My wife had the idea that I could just go by people’s homes and they could leave the masks outside for me and I could gather them up and deliver them,” Clore said, noting that his state police leadership supported the effort.

“It’s not something we’re doing on a large scale, but every little bit helps. We get them to the UVa hospital and Martha Jefferson hospital and they were appreciative,” he said.

Clore’s avocation has impacted his vocation in other ways. Besides getting the chance to help his fellow man, he’s found more empathy.

“When I was younger, I felt like I was there to enforce the law and I still believe that, but I see people not just for what they’ve done but I understand that sometimes things happen that lead to actions,” he said.

“When I realized how important it was to be forgiven, I started looking at people as creations of God. I still believe in enforcing the law, but I understand there are sometimes things that cause people to act certain ways. So if someone is yelling at me during a traffic stop right from the get-go, it may not be me they’re angry at,” he said.