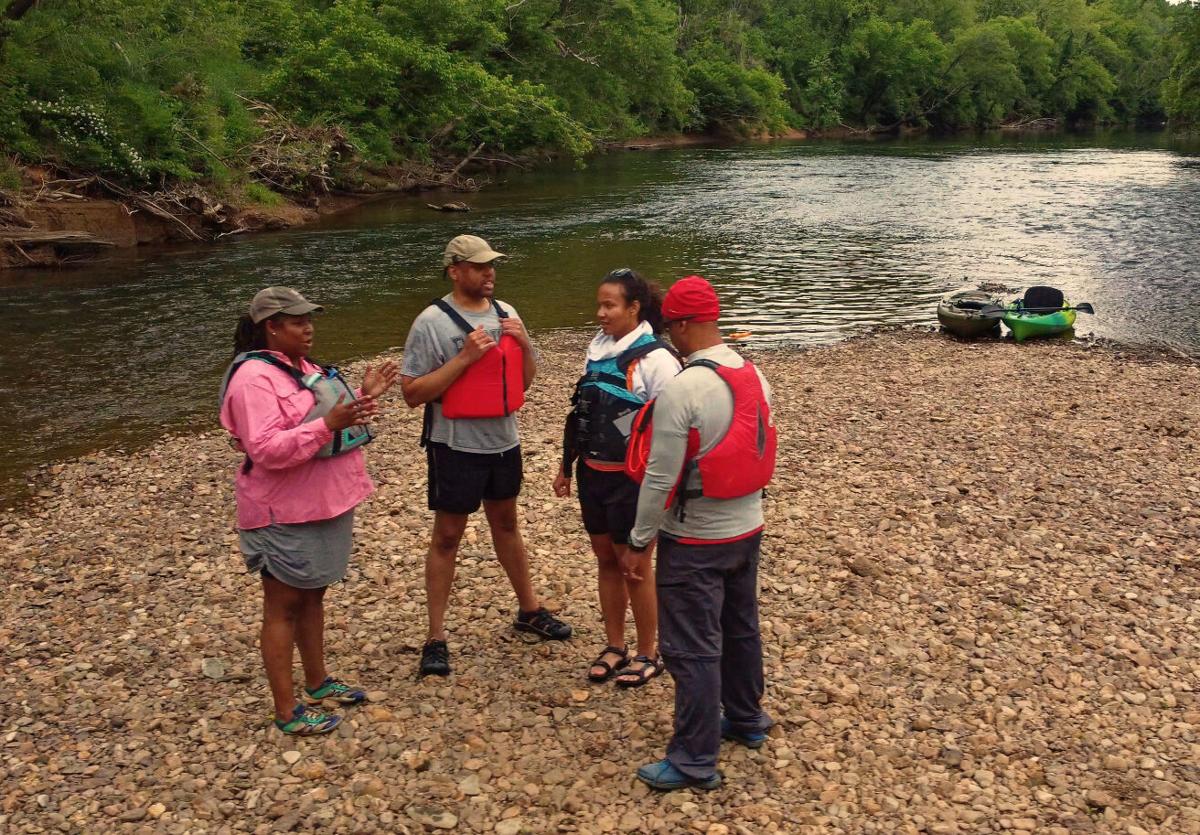 Niya Bates and Justin Reid, from left, talk family history during a recent trip on the James River with Hannah and Horace Scruggs III. Father and daughter, the Scruggses are putting together a documentary about their ancestral family’s life on the river. 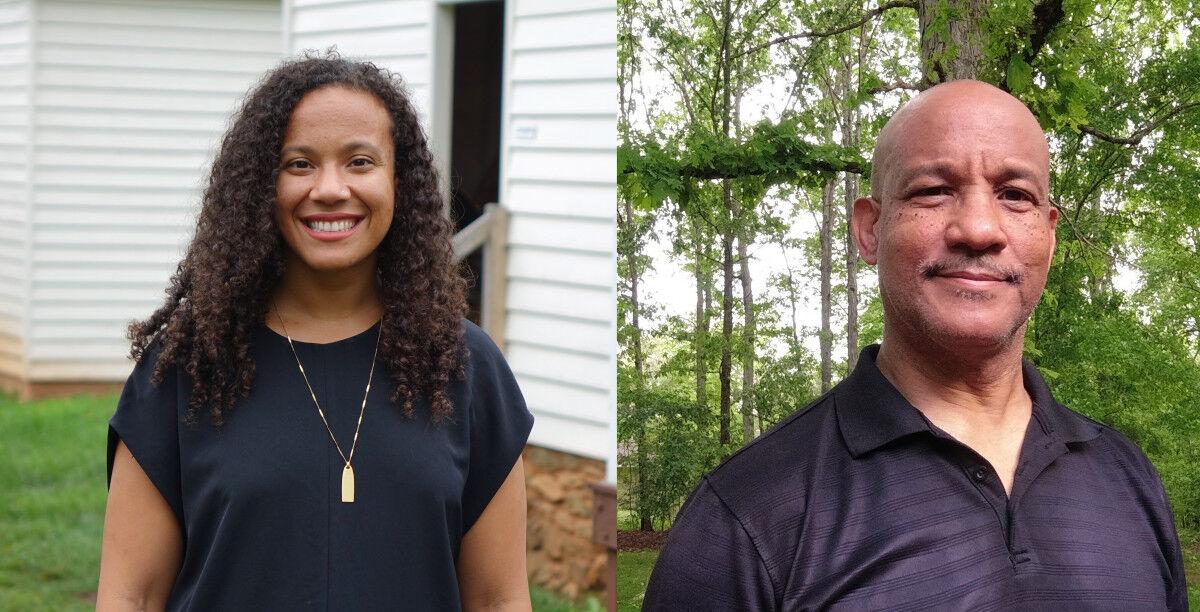 Hannah and Horace Scruggs III recently were awarded a grant from Virginia Humanities to support their documentary project.

It’s a family story, a store of race, an American tale seldom told — and a Fluvanna County father and daughter are working to make sure it gets a chance to be heard.

Hannah and Horace Scruggs III will spend the next year paddling about the James River and the old plantations that line its shores to create a documentary about the river, their family and the free and enslaved African Americans who plied its waters for trade and barter.

“We grew up doing this to some extent, spending time together on the river, and it’s fun to do it as an adult,” said Hannah, who works in genealogy at the Smithsonian Institution’s National Museum of African American History and Culture.

“It’s not something we get to do without planning in advance, anymore. It’s a good opportunity to do that with him and to get that kind of experience in a setting that combines what I do as a public historian,” she said. “Dad is getting more into local history and I have been for a long time, so it’s good to be able to share that with him.”

“It’s been a while since we’ve been able to do that,” said Horace, a Fluvanna musician, documentary maker and former high school choir director who grew up near the river. “That’s a great part of this project.”

The project is being supported by a recently bestowed grant through the Virginia Folklife Program at Virginia Humanities. It involves paddling down the James River from Scottsville to Cartersville with fellow historians Niya Bates, who served as director of African American history at Monticello prior to seeking a doctorate in history at Princeton University, and Justin Reid, of Virginia Humanities.

Bates and Reid also have family history along the waterway.

As they go, they will stop to discuss the history of their families and those of other African Americans who helped to build the barns, manor homes and outbuildings of the large plantations and toiled in the fields and worked the river.

“The overall arc is reclaiming the stories of African Americans that have been not told, sometimes intentionally not told,” Horace said.

Horace has created documentaries before. With his performance group, Odyssey of the Soul, he made a documentary a few years ago called “Resilience, Recovery and Rebirth: Sustaining Hope in Trying Times” about African American history.

“There are many stories of African Americans participating in the history of America, but we don’t know those stories,” he said. “It’s important for me and for our country to rediscover those stories and put those people back in their rightful place.”

For the Scruggs family, Fluvanna County and the James River are their rightful place. The elder Scruggs was born and reared close to the historic Bremo Plantation, created on a land grant by Brig. Gen. John Hartwell Cocke, who led a part of the state militia in the War of 1812.

Cocke, a good friend of Thomas Jefferson’s, had his manor house built with architectural designs similar to those made for Monticello.

The Scruggses’ ancestors worked on and for the plantation as both free and enslaved laborers. One relative, William Matthews, was born into freedom and lived near the plantation. He worked as a boatsman on the river before and after the Civil War.

Another ancestor, Ben Creasy,  was a carpenter at Bremo and is buried at the plantation, his name visible on a stone marker.

“I found out fairly recently about [Matthews]. I mean, you hear stories as a child. I grew up near Bremo Plantation, in an area of Fluvanna County that’s called Tepee Town or Weber City, just outside of Fork Union,” Horace recalled. “We used to sneak down the railroad track that connected our property to the Bremo Plantation and we’d go on the plantation and go looking around. We knew people were enslaved on the plantation but we didn’t realize our actual ancestors were.”

For his historian daughter, living so close to what could be considered the family’s ancestral home was exciting.

“I’ve always been interested in history, even as a kid, and I read a lot of historical fiction growing up,” Hannah said. “In fourth grade, I did this research project where I researched the plantation on which my family was enslaved. I was 10 and I knew that my family had been in the county for a long time and I knew about slavery and my family had been enslaved.”

She was able to arrange an interview with the then-residents of Bremo Plantation, descendants of Cocke.

“They were very, very nice to me. They were in their late 70s and were very kind,” she recalled. “I have good feelings toward those people. They allowed our family to have access to the property where we have ancestors buried.”

Times have changed in 20 years and the family no longer has access to where their ancestors lived and worked.

“It’s hard understanding that it’s the place where my ancestors lived and that they are buried there and they helped to build that house and work the land, but I’m not allowed to go there,” she said.

It was Hannah’s research that led to the discovery of their ancestors and the knowledge that their family was involved in the workings of many of the plantations along the James. It makes sense when one considers that slaves were traded, sold and lent to other landowners.

For her father, the information has led to some introspection, as do many trips down genealogical rabbit holes.

“My family didn’t move five miles from the plantation where my ancestors were,” Horace said. “Coming to that realization is, like, Wow! I’m still walking the ground that my ancestors walked on. I paddled that river many a times and didn’t know that a [relative] was an actual boatman on the James River.”

That knowledge makes Horace wonder about his own love of the outdoors, especially the waterways.

“I think about my own attraction to being on the water, and I think about why you do what you do,” he said. “Is it a part of you? Is there a connection to someone in your bloodline who did those things, as well?”

That’s one of the reasons for the documentary, he said — to look into the past and pique others’ interest in doing the same.

“There is a trend now to tell the whole story of America’s past. I liken it to when they said that Thomas Jefferson built Monticello. It’s like, no, he didn’t build it. He hasn’t even paid for it yet. It was all free labor, slave labor that built it,” Horace said.

“I think that’s the way I look at America’s history. There’s a lot we owe people as far as having their place in the story of this country, and this is a part of that story that needs to be told,” he said. “Part of my focus is on the local history, as well. Both enslaved and free Blacks were plying up and down the river making commerce, making Virginia and America what it is.”

Horace said he hopes the documentary, when finished, will help other African American’s stake their claim as Americans.

“As African Americans, we can claim America. We’ve been here since before it was even a country and we’ve had a part in everything this country has done. We can begin to claim our citizenship and our part in the story, and the more we do that, the more we can shape our country and become policymakers and become activists for change,” he said.

“We’ve been here since the beginning. My ancestors could have been in the country longer than many white people’s ancestors. It gives me the sense of, hey, I’m part of that story. I can lay claim to building America’s history,” he said. “The trick is getting African American stories back into the overall story. That’s what we’re hoping to do with this project.”

This story was edited to add more information about the family's ancestors.

Canary Islands: Houses and crops are threatened by the lava flow

This farm in the U.K. is for animals with special needs

This farm in the U.K. is for animals with special needs

How a Jordanian travels the world from his basement

How a Jordanian travels the world from his basement

At 1:39 a.m. Saturday, officers responded to a report of multiple shots fired at 313 Second St. SE., where the Bluegrass Grill and Bakery is located.

0 Court Square was listed for sale earlier this month for $1.35 million.

“In hindsight, I would have engaged the City Council more directly in my deliberations and worked in partnership with Chief Brackney to develop an improvement plan. Fact is, I just did not have the luxury of time."

Albemarle board approves development with 190 affordable apartments near Forest Lakes

Neighbors have come out against the proposal, citing concerns about road safety and traffic, school overcrowding, the height of the buildings and possible stormwater runoff issues.

Among the fatalities were two pedestrians

Because it's a new role, the schools and counselors have flexibility to define it. So far, the middle school counselors are focused on staying in touch with students who are quarantined because of a possible exposure to COVID-19, while others are working in the classrooms, teaching social-emotional skills.

Niya Bates and Justin Reid, from left, talk family history during a recent trip on the James River with Hannah and Horace Scruggs III. Father and daughter, the Scruggses are putting together a documentary about their ancestral family’s life on the river.

Hannah and Horace Scruggs III recently were awarded a grant from Virginia Humanities to support their documentary project.