Leo Montini swaggered down the red runaway Thursday morning, resplendent in a shirt made from a paper bag and decorated with cardboard from a Freak of Nature beverage container, accented with a flashy “diamond” belt made up of plastic gems glued to paper.

Robinson said the activity was a way to talk with students about how to reuse, reduce and recycle, as well as how to care for the planet.

“Those are great conversations to have with kids so that they can feel empowered and that they’re making a change, and that one small act can be a great step toward big progress,” she said.

The project gives students the chance to work together as they workshop ideas and create outfits, Robinson said.

‘It’s an activity that’s helpful for students to develop some confidence and overcome a little bit of shyness,” she said. “They have to walk the runway and create their own commentary. Some of these skills are challenging.”

Walking the runway was a highlight for Leo and other students.

“I thought walking the runway was you just walk the runway and then go back, but you had to stop and pose,” he said. “It was actually really fun. I usually get stage fright, but this wasn’t really like a stage. It was just really cool to be on the runway.”

Leo said having friends there helped him avoid stage fright — “just to know that my friends are next to me and are always going to be by my side,” he said.

Other students used foil padding, paper and plastic grocery bags, cereal and soda boxes, caution tape and yarn to make dresses, shirts and other outfits. Some constructed outfits for a football player, the Zombie apocalypse and a Porg, the cuddly creature featured in the latest “Star Wars” movies.

“I think I look good,” second-grader Ethan Sharpe said as he walked with his classmates to the school’s gym for the runway show.

On the runway, students strutted and twirled as a classmate read a description of their creations, many of which included some French words. Paris was the setting for the Trashion Show, and French is the school’s chosen language for its foreign language immersion program.

Not all outfits stayed intact during the runway performance.

In a more typical school year, parents can attend the event and cheer on their children. With COVID-19 mitigation measures in place, however, parents had to sit this one out. Instead, the fashion show was recorded for families to enjoy together later.

Leo and classmate Andy Gruber said they wished their parents could have been there, but said they planned to watch the video later.

Andy said he would want to wear real clothes if he did another runway walk.

“I want to just go in my real clothes and walk the runway, but this was fun, too,” he said. “Maybe dress up super fancy and make my own real outfit.”

Andy’s outfit was inspired by a classmate. He was a miner-turned-monster. He even made torches to go with the look, which he shared with Leo.

All of Robinson’s students are learning in person. Last year, after schools closed, she had students create four outfits at home to keep the Trashion tradition alive.

Robinson said her favorite parts of the project are the beginning, when she explains it to students, and the end, when she sees the results of their efforts.

“They look at you and think you’ve gone a little crazy and wonder if I’m really planning to do this,” she said. “Then seeing how they develop the ideas and again how they work together and how they decide to use the materials. … At the end, seeing what they’ve come up with and how vastly different their outfits and ideas are from each other, and it shows these unique personalities and characteristics of each of these kids but also who they are as a group. So I think it’s just amazing, start to finish.”

Second graders at Meriwether Lewis Elementary gear up for the 2021 Trashion Show on Thursday. With pandemic restrictions in place, the event w… 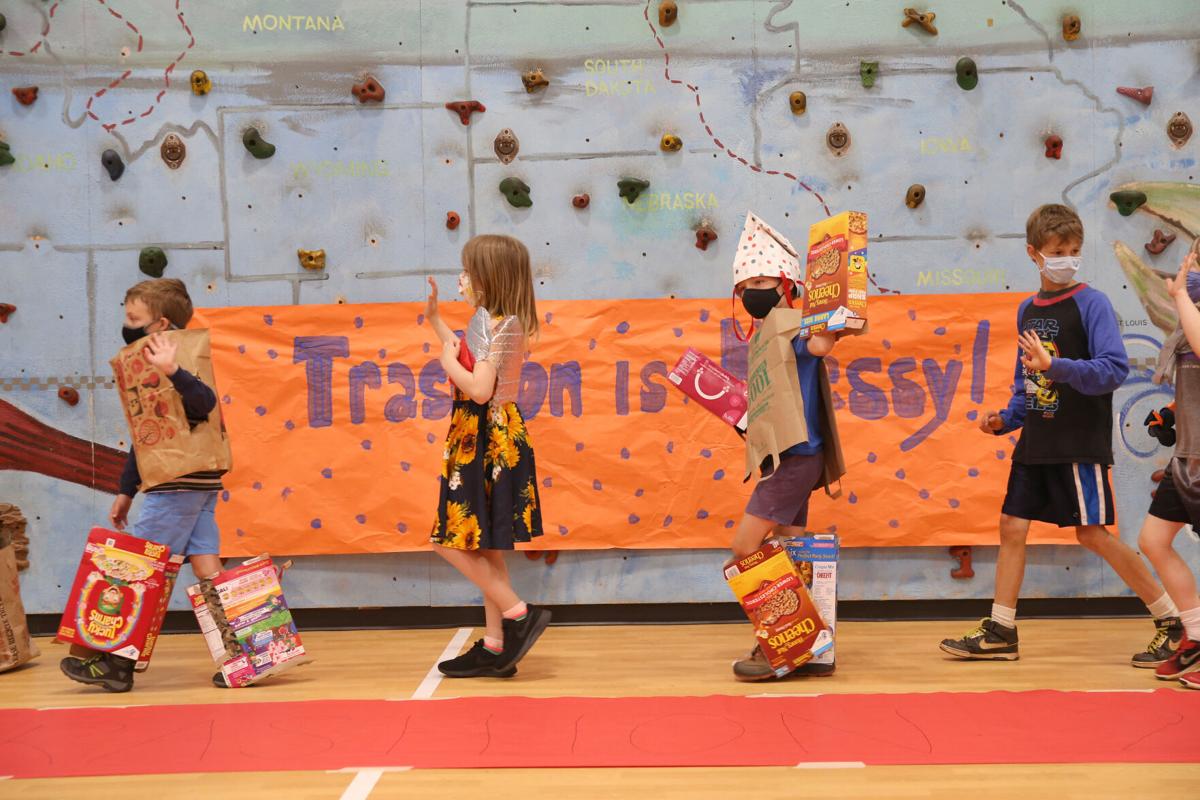 Second graders wavs as walk a final lap of the runway during a “Trashion Show” for Earth Month on Thursday at Meriwether Lewis Elementary. Students made their costumes out of recycled materials. WATCH NOW: Find more photos and a video at DailyProgress.com. 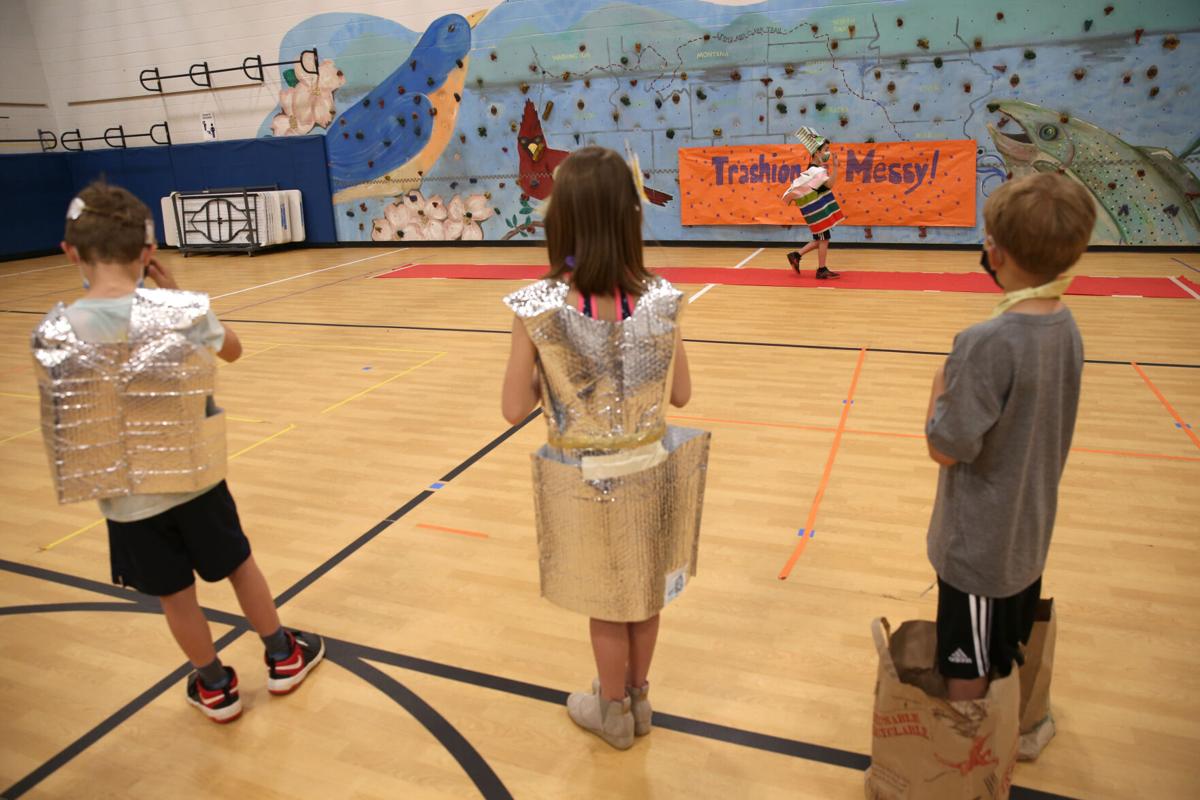 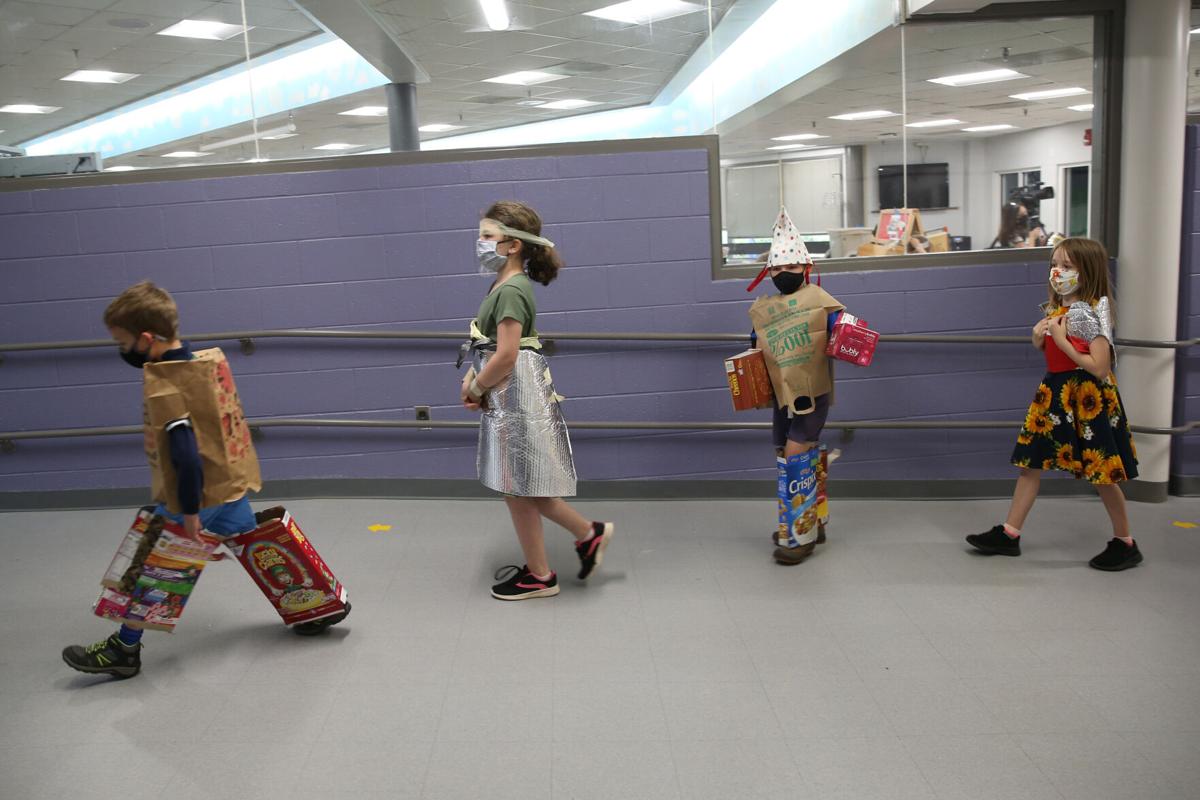 Second graders all dressed up and en route to the gym before a “Trashion Show” for Earth Month recently at Meriwether Lewis Elementary. Students made their costumes out of recycled materials.