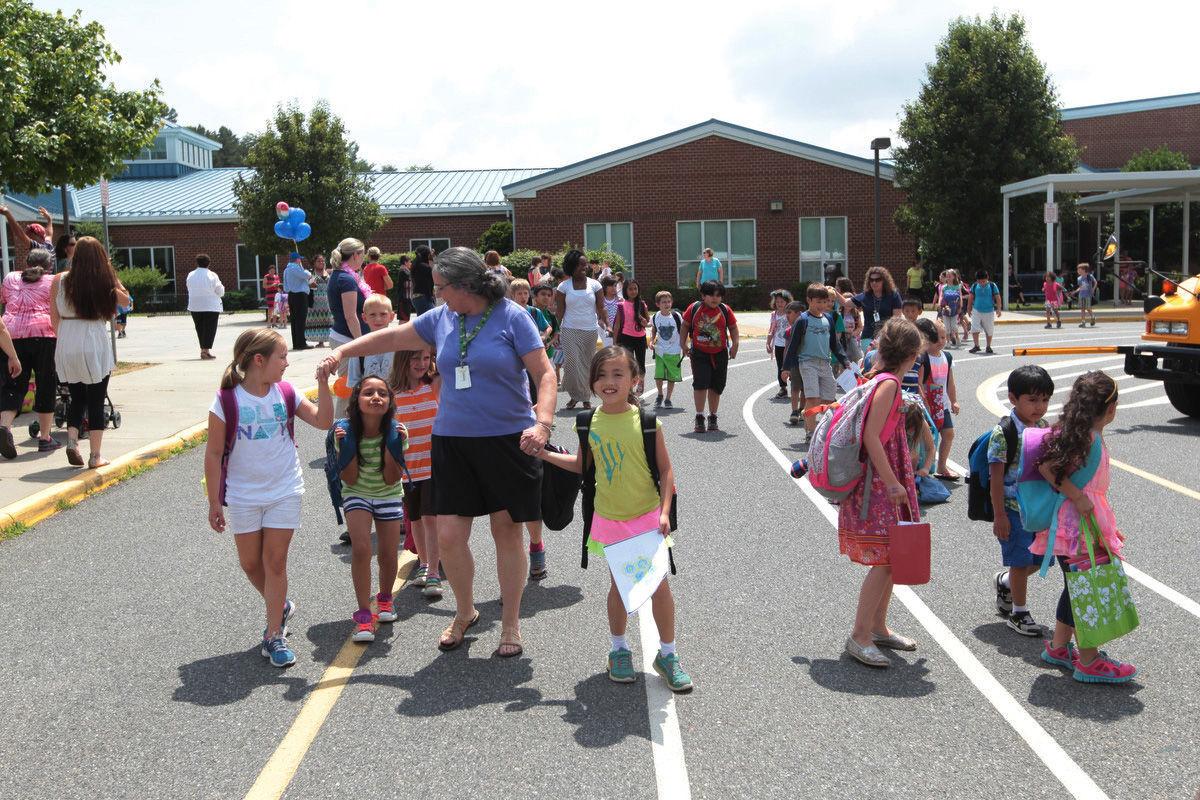 Students at Baker-Butler Elementary School walk to their buses in September 2020. Because of overcrowding at the school and growth in the northern part of Albemarle County, the school division's Long Range Planning Advisory Committee has recommended the county build a new elementary school. 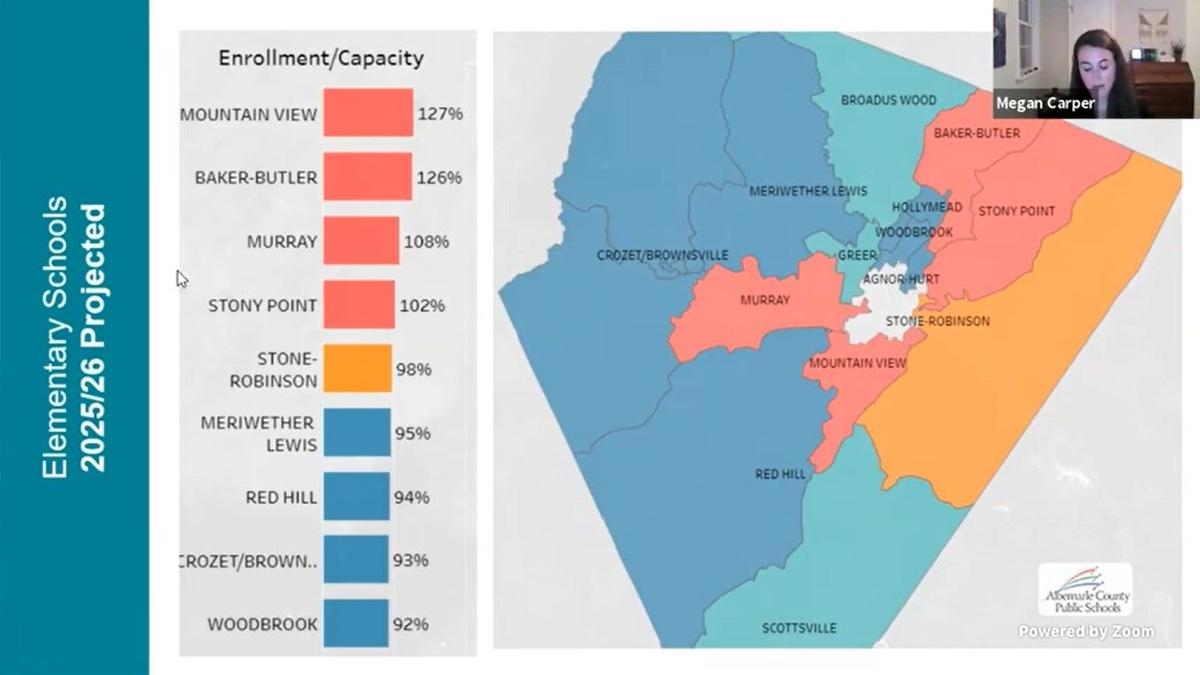 Several schools in Albemarle County are expected to be overcrowded by the 2025-26 school year.

With Albemarle County’s population expected to grow by 44% in the next 30 years, the school division needs to build a $40 million elementary school and secure land for another new school, according to a batch of recommended projects totaling $196.2 million.

The division’s Long Range Planning Advisory Committee recommended the new school, land purchase and nine other projects in a report it recently presented to the county School Board. The report, which is released every two years, serves as the basis for the board’s capital planning and its funding request to the Board of Supervisors.

“The price tag may seem large. However, it is built upon the accumulated capital needs of the school division over the past several years,” said Megan Carper, a committee member. “The COVID-19 pandemic has not slowed the construction of new development in Albemarle County and [Albemarle County Public Schools] must continue planning efforts to accommodate the student population growth.”

Recommended maintenance and replacement projects and programs would cost $79.5 million over the next five years, according to the presentation.

The committee’s report typically comes with a high price tag, and many of the projects are not funded in the county’s five-year capital improvement program. Still, the report serves as a strategic plan for the division in tackling capital needs.

From fiscal years 2016 through 2020, Albemarle spent $101 million on school-related capital projects, according to county data.

The School Board will discuss the committee’s recommendations and how to prioritize the different projects at its Oct. 14 meeting. The board and the Board of Supervisors will hold a joint meeting about the capital improvement program Oct. 20.

The 10-person committee has worked over the last 12 months to develop the report, researching different topics related to school facilities such as enrollment and capacity and the future of learning spaces.

Capacity concerns drove five of the committee’s recommendations for the next five years.

The committee recommended that the School Board move forward with the long-planned $32 million high school center that was paused during the COVID-19 pandemic. The high school center is the top-ranked project and is aimed at addressing current and projected capacity issues at Albemarle and Western Albemarle high schools.

The committee’s second-ranked project would address overcrowding at Mountain View Elementary. Exactly what that project will be is still undetermined, according to the report. A consultant is working on a master plan study to determine a long-term solution for the school.

The consultant’s recommendations will be presented sometime this fall. A $6.2 million expansion of Mountain View is already in the works. However, student enrollment is expected to exceed the new capacity by fall 2023.

“We were sensitive to the fact that we already had recommendations for Mountain View, and then we’re asking for even more,” committee member Jason Handy said. “But then we have to think about the fact that we feel a little bit behind the ball in that part of the county.”

The new elementary school, which ranked third on the list of projects, should be built in the northern feeder pattern, the committee said, while the school division should buy about 20 acres in the western feeder pattern for an eventual new building. The committee included $7.5 million for the land purchase.

The school division currently is expanding Crozet Elementary to address overcrowding in the western feeder pattern.

Eight of the division’s 23 schools are expected to be over capacity by 2030-31, including Baker-Butler Elementary, which would be 142 students over capacity by that year. The new elementary school would help ease capacity issues at that school and in that area more broadly.

Baker-Butler and Hollymead elementaries are in areas with high neighborhood growth, with future developments expected to bring in lots of students, according to the division’s analysis.

Albemarle County already has a potential elementary school site along U.S. 29 in the northern part of the county in the Brookhill development.

Albemarle County hasn’t built a new school since 2002, when Baker-Butler opened. Since then, the division has worked to expand existing facilities to address capacity issues and use mobile classroom trailers as a stopgap measure. But that strategy is not feasible moving forward, officials have said, because of the school footprint or current student enrollment.

The School Board will have a work session later this month to discuss how big or small schools should be.

Currently, enrollment varies throughout the county, especially at the elementary level where schools were as small as 153 students and as big as 723 last school year. At the middle school level, enrollment ranged from 333 students to 871. High school enrollment is more balanced, with Western Albemarle having the smallest enrollment at 1,138 students and Albemarle High School having the most at 1,853.

Setting a standard for school size was one of the committee’s recommendations.

Other recommended projects include the construction of a $1.5 million standalone data center to house the division’s server equipment, as well as the addition of elevators at six schools, which would cost $4.2 million. The existing elevators at Albemarle, Western Albemarle and Monticello High; Burley Middle; Mountain View and Greer elementary schools do not meet modern standards and emergency personnel cannot fit a stretcher in them.

The elevator additions and data center were recommended in 2019 but were not funded. New this year is a $4.5 million recommendation to improve air quality systems through the division, which is in response to the pandemic.

Handy, the committee member, said his daughter at Monticello High has been using a wheelchair recently and has to either leave class early or arrive later in order to navigate to and from the elevator at the school’s center.

“I recognize that one student story shouldn’t be the sole factor in making funding decisions,” Handy said. “However, this is a good example of how bringing our infrastructure up to modern standards will have a tangible impact on equity.”

To determine how to spend that money, the committee recommended further study and evaluation.

Students at Baker-Butler Elementary School walk to their buses in September 2020. Because of overcrowding at the school and growth in the northern part of Albemarle County, the school division's Long Range Planning Advisory Committee has recommended the county build a new elementary school.

Several schools in Albemarle County are expected to be overcrowded by the 2025-26 school year.